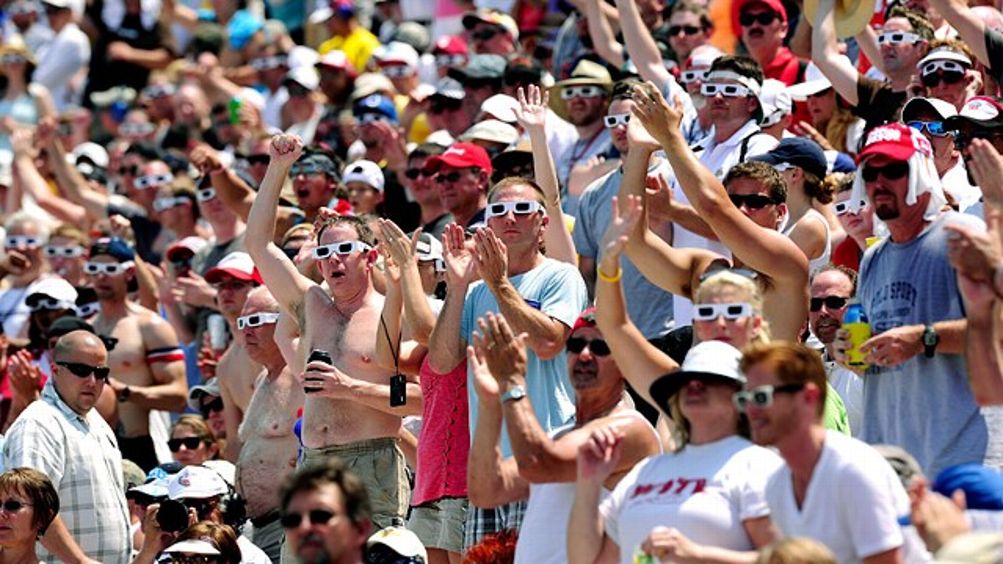 It’s brutally hot five miles northwest of downtown Indianapolis and the smells of cheap beer, gasoline, fried foods, failing deodorant, overflowing Porta-Potties, and a little bit of reefer fill the Georgetown Road air. Yes, it’s Memorial Day weekend at the Indianapolis Motor Speedway, and while the Baby Boomers in the city like to say the Indianapolis 500 isn’t quite what it used to be, the guy in his twenties doing keg stands with his jean shorts around his ankles and wearing a shirt that erroneously reads, “You’ve seen a lot of penises but you haven’t seen mine” refuses to give in to that notion.

Having spent each of my 25 years living in the Midwest, I can tell you this much about people from flyover states: We don’t care what people on the coasts think about the things we view as sacred. We know they’ll never understand why we love small towns, college sports, country music, Larry the Cable Guy, and teenage pregnancy so much, so we don’t even bother defending those things when we’re laughed at for loving them. We like what we like. If you don’t, that’s perfectly fine because you aren’t one of us. This “love it or leave it” attitude runs rampant in Middle America, and for so many Hoosiers it perfectly describes how we feel about the Indy 500. We know outsiders think the race is nothing but a bunch of hicks watching cars turn left, and we don’t bother trying to change their minds. It makes no difference to us if they understand that for hundreds of thousands of us inside the IMS walls on race day, what happens on the track isn’t nearly as important as what happens inside the track.

Like I’ve done in each of the past five years, I watched last Sunday’s Indy 500 from the fabled Turn 3 infield, where irresponsible behavior is mandatory and clothing is optional. Like I’ve also done in each of the past five years, I made it a priority to seek out one of the handfuls of guys with white and gray patches in their hair shortly after I got to the track but before the beer I was drinking got the best of me. Such elder statesmen are rare in the infield, where 99 percent of the occupants are younger than 40, but it’s always worth the effort to find them because the stories they tell are the stuff of legend. They remind me that if I want to make the Indy 500 Infield Hall of Fame someday,1 at some point I will probably have to be escorted out of the track in either handcuffs or a body bag.

This year, I was lucky enough to share a 10-minute conversation and an ice-cold Bud heavy with a ponytailed guy from Ohio who said he’s been coming to the Turn 3 infield every year since 1981. That year, when he was 12 years old, he saw a vagina for the first time thanks to a drunk woman dancing naked on the roof of a concession stand. He assured me that stories like his are common for anyone old enough to remember the 500 in its heyday, when names like Foyt, Unser, Mears, and Rutherford weren’t quite yet immortal. Back then, he claimed, the number of topless women in the infield was only surpassed by the amount of drugs being consumed, as the Turn 3 infield atmosphere was every bit the kind of scene that gives fathers with adolescent daughters nightmares.

These days the party scene at the Indy 500 has become a parody of those glory days. Sure, the place is crawling with chicks willing to reveal their goods, and sure, you can’t swing a beer bong over your head without hitting a guy who is wearing some combination of cutoff jean shorts, a tank top, a mullet, and an article of clothing with an American flag on it. But the truth is that most of these outfits are worn in irony,2 and the infield has essentially become a bizarre dick-measuring contest,3 where guys in their twenties (myself included) try to one-up each other by dressing, drinking, and behaving as white trash as possible, even though most of us are college students or white-collar workers who were born into upper-middle class families. Somewhere along the line, the people who were earnest in their year-round wearing of wifebeaters and mullets stopped filling the Indy infield, and they were replaced by a crop of kids who tried to look and act as trashy as possible because they wanted to fit in but stand out at the same time.

But despite this lack of authenticity and the fact that security and police involvement has increased since the 1980s, the Turn 3 infield is still anything but tame, and it’s certainly the biggest and wildest party you will ever see at a sporting event.4 After all, young people and a ton of alcohol will always be a recipe for a crazy time. And when I say that the security and police presence has increased, what I really mean is that if you jump the only fence between the fans and the cars going 220 miles per hour, you now get thrown to the ground and put in handcuffs instead of getting a medal and a firm handshake from Mary Hulman, like I’m pretty sure you got if you did the same thing in the ’80s.

The infield security guards are still either the laziest people in the world or they are just laid-back folks who understand that being a party pooper is a more serious offense than the petty, victimless crimes they’re hired to stop. This became apparent shortly after my friends and I tapped the three kegs we brought to the track and put them on ice about an hour before the green flag dropped. A security guard approached us and said: “You guys know you aren’t supposed to have kegs in here. I’ll let it slide, but you have to promise me you won’t throw any of them over the fence again this year.”

Yes, you read that right — again.

You see, two years ago I brought a couple kegs to the race and tapped them not too far from where we tapped our kegs this year. And when the first keg was empty, I channeled my inner Magnus Ver Magnusson and threw it over the 10-foot fence, prompting one of my friends to freak out about the $30 deposit and climb the fence to retrieve the keg. Now, based on the video I linked to earlier and the fact that throwing beer cans over the fence was a point of emphasis for the security people this year, you would think that my group of friends being recognized as the guys who threw a keg over the fence and then retrieved it would be enough for us to get reprimanded somehow, especially since we had all the necessary materials in front of us to do it again. Yet we were essentially told, “You know that stupid, dangerous, and entirely illegal thing you guys did a couple of years ago? Do me a favor and try to resist the temptation to do that again. Or else I’m going to take your already-empty kegs away from you and then give you another warning next year.”

As if the halfhearted warning weren’t awesome enough, later in the day a different security guard patrolled our area and kept his eye out for suspicious activity by yelling at girls to remove their tops, daring my friends and me to bong beers, and giving me permission to urinate on the fence instead of walking a few hundred yards to the restroom.5 So yeah, with the freedom to essentially do whatever we wanted (except throw beer cans over the fence), the kegs were tapped, the beers were flowing, and a good time was had by all. And just like the founding fathers of the race intended, I woke up Monday morning with more bruises, headaches, lost shoes, pulled muscles, beer-soaked articles of clothing, and regrets than coherent memories of what happened the day before.

I’ve heard the Turn 3 infield at the Indy 500 described to people who have never been as “a place where things you’ve never seen before happen,” and even though I’ve been to a bunch of 500s and have still yet to see a pro team from Cleveland win a championship in the Turn 3 infield, this is about as good a description as there is. In my first five visits, I’ve seen more fights, mullets, and 60-year-old breasts than I can count. I’ve seen people having sex behind a concession stand. I even saw some badass guy with huge muscles throw a keg over a 10-foot fence a couple of years ago. Sure, I haven’t seen a naked woman dancing on top of a concession stand or hard-core drugs being consumed in the open, but I’ve had a wild enough experience over the last few years that when my mom asked me Monday afternoon if I heard about the guy who overdosed on “bath salts” and started eating another dude’s face, I genuinely responded: “No, I didn’t. Was that in Turn 3 during the race or in the Coke Lot after the race?”

So the Baby Boomers can talk all they want about how the Indianapolis 500 isn’t what it used to be. And maybe they’re right. But if Sunday is any indication, believe me when I say that the fate of the Turn 3 infield is in good hands, because my generation is keeping the party going strong and we have no plans of letting up anytime soon.