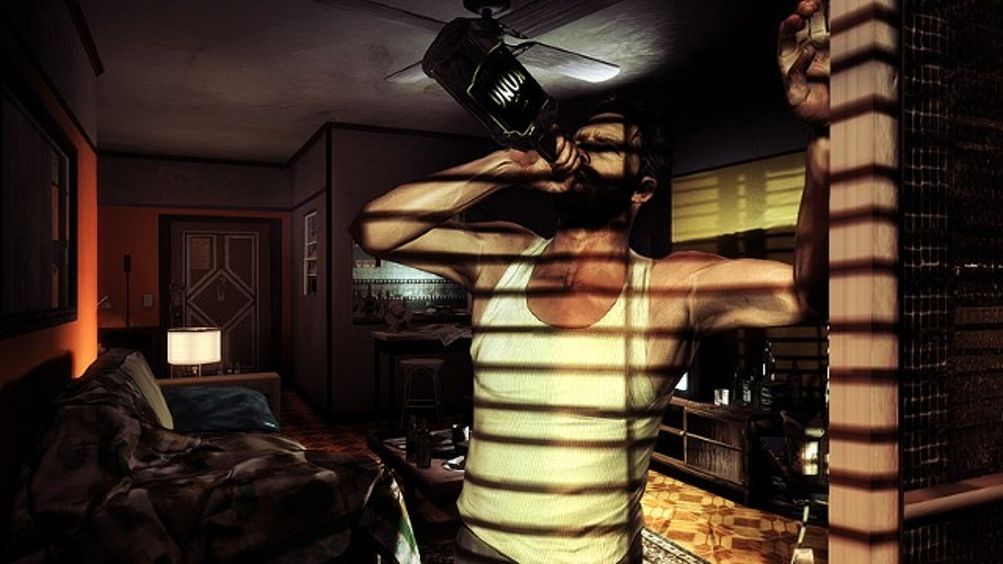 Max Payne is, among many other things, really bad at his job. Always has been. In previous Max Payne games (and one extraordinarily ill-advised movie) Max worked as an NYPD police officer with an unusual knack for getting everyone he loves — wife, baby, girlfriend — killed. In Max Payne 3, Max has relocated to São Paulo, Brazil (which he calls, in a line guaranteed to offend everyone, “Baghdad in G-strings”), to work as the bodyguard to a family of real-estate scumbags. It turns out that Max is worse at bodyguarding than he was at police work. If you’ve hired Max Payne to protect you, know that you’ve got roughly an hour left to live.

Max freely admits that he’s bad at his job. He talks about it all the time. It doesn’t help that Max is an alcoholic and a prescription-pill addict, but I’d probably drink, too, if I had as many ghosts clanking around in my past. Over and over again in Max Payne 3, Max tells us he’s old, and fat, and rusty, and is in over his head, and doesn’t know what he’s doing, and can’t imagine how he’s going to get out of his current predicament. “I ain’t slippin’,” he says at one point. “I’m slipped. I’m a bad joke.” Max’s lines usually arrive in dark bursts of Chandleresque narration, much of which is enjoyably overwrought: “I kept moving toward the signs of life — rubbing them out as I went along.” James McCaffrey,1 the actor who portrays Max, growls every line as though he’s just knocked back a shot of some liver-annihilating rotgut.

Three seconds after claiming to be an incompetent failure, however, Max is leaping in slow motion from a speedboat while shooting an incoming RPG out of the sky and then single-handedly massacring an entire army of Kevlar-encased Brazilian commandos. Max Payne 3‘s hero is simultaneously a barely functioning alcoholic and one of the most sublimely gifted killing machines in video-game history. Which is a little weird.

Ludonarrative dissonance, a term first coined by the game designer Clint Hocking, arises whenever a video game’s fiction says one thing and its gameplay says an opposite thing. Some designers and critics regard ludonarrative dissonance as a core problem in modern game design. Max Payne 3, quite possibly the most ludonarratively dissonant video game ever made, amounts to 12 and a half hours of game fiction and game action throwing empty champagne bottles at each other. Max Payne 3 is aware of its dissonance, and even has some fun with it, as though in the hope that acknowledging a problem’s existence might be mistaken for addressing it.

If a game builds itself upon the consciousness of a drunkenly self-pitying white-hat psychopath, should it not at least try to somehow express that character’s internal predicament mechanically? Narration takes you only so far, especially when it’s occurring around the cooled edges of harrowing combat. The question is how one goes about expressing inner turmoil in a game almost exclusively about shooting dudes. You can’t exactly give Max’s guide hand the shakes, or have Max black out periodically, because few gamers would tolerate that. It could be that Max Payne 3‘s designers thought deeply about the game’s ludonarrative dissonance and judged the problem it presented as insoluble — and, from a commercial perspective, maybe it is. Whatever the case, the result is a game that appears to be trying to say something about regret and death and slaughter and addiction, but, of course, can’t. Max Payne 3 is an exuberantly stylish, utterly empty game — a kind of Higher Trash, you might say.

As a critic I’ve made no secret of my love for many of Rockstar’s games, the flaws of which are often as interesting as their strengths. What I admire most about Rockstar is its temperamental aversion to creative compromise. The planet was not exactly crying out for an open-world Western, but Rockstar went ahead and made Red Dead Redemption anyway — a game that, two years later, I frequently return to, just to spend more time in that wonderfully realized world. I’m sure any focus-group guru worth his salt would have warned Rockstar against making the protagonist of Grand Theft Auto: San Andreas a young black man, but again, Rockstar defied expectation. Now Rockstar has set its latest game in a Portuguese-speaking locale deeply unfamiliar to most Americans. More intriguing yet, they’ve done almost nothing to ease the game’s audience’s atmospheric entry into this world. While the game’s portrayal of São Paulo’s wild, wild south is — one hopes, anyway — greatly exaggerated, the game’s Brazilian characters speak Portuguese throughout; this allows Max, and the audience, to remain confused and off-kilter to a degree most games wouldn’t dare permit. Max Payne 3 doesn’t skimp on providing a bewilderingly complicated narrative, either. When Max complains that the story he’s trying to unravel is hard to follow, his interlocutor tells him: “You’re not supposed to follow it. The government can’t even follow it.” OK. But is the player supposed to be able to follow it?

A lot of Rockstar’s stories have been confusing and dissonant in the aggregate, of course, but that’s due to the fact that they’re almost all open-world games2 that take dozens of hours to complete. Structured episodically, they are, in effect, the video-game equivalent of a television series. As with a television series, it’s not the overarching narrative stuff you remember so much as the smaller, more isolated moments. The Playboy X and Dwayne conundrum in Grand Theft Auto IV, say, or Seth’s antics in Red Dead, or the Love Fist mission in Vice City. I couldn’t tell you where in these games the above moments slot into the bigger story, because the bigger story is rarely what’s most interesting about Rockstar’s games.

Max Payne 3 is no television series. Max’s world is closed and as relentlessly forward-moving as a long-haul semi. This is cinematic game, unapologetically so, and appears to have taken considerable visual inspiration from Tony Scott’s Man on Fire. Its story has been fine-tuned for maximum twists, turns, and gotchas, to the final and quite startling result of a story that, by the end, makes impressively little sense. In the last third of the game, a new villain seems to get introduced every 10 minutes.

Max Payne 3 is grim and punishing; anyone who claims he had “fun” with this game needs to have his head examined. Now, it’s not as though Rockstar has moved the series so far afield from the tone of the original Max Payne games — developed by the Finnish developer Remedy3 — which were fairly dark. One thing sadly lacking from Rockstar’s interpretation of Max Payne is charm. There’s no moment in Max Payne 3 that compares to the first Max Payne, wherein Max realizes he’s a video-game protagonist, and there’s also no leavening presence of an interesting female character like Max Payne 2‘s Mona Sax. Max Payne 3‘s story is brutal, the gameplay is brutal, and the world is brutal. If this game were a meal, you might say that it needs some textural variation.

The great shooter innovation of Remedy’s Max Payne games was something called bullet time, which makes its return here. As before, when Max goes into bullet time, incoming bullets’ individual trajectories can be seen slowly and ghostily sailing by him. When Max dives through the air, meanwhile, you’re able to move your reticle — the one on-screen phenomenon ungoverned by any slow-down — to place your warheads on the foreheads of every Uzi-lugging enemy in the room. You know what it’s like to jump down a flight of stairs, toward eight guys, and kill every last one of them before you land? It’s impossible to get sick of doing it. Rockstar’s bullet time makes virtually all of Max Payne 3‘s gunfights feel memorable, which is saying something given that 90 percent of these gunfights are, essentially, identical.

Bullet time has, however, been given a singularly gruesome augmentation. In certain situations, Max’s fatal shot will be tracked from his gun’s barrel to his target’s eye socket or groin or forehead. Plenty of games have harnessed a similar snuff-film frisson, of course, but Max Payne 3 allows for an additional measure of kill-cam interactivity. Now you can keep firing after the fatal shot and see the animation respond in real time. The first time I did this, in the tutorial, I watched an anonymous Brazilian dude’s nose get blown off, and, with each successive trigger pull, his right eye disappear in a puff of red mist, his chin burst open, and the back of his head explode in a floriform bloom of dangling gore.

At first you hope that Max Payne 3 is trying to awaken gamers to the moral desolation at the heart of almost every shooter. Eventually you realize that, no, actually, that’s probably not what’s happening at all. So why are we being forced to watch a guy vainly reach up to protect the gaping red hole his nose once comfortably occupied? In the best-case scenario, this is a way to express the brutality of a horrid, immoral world. During the game, Max is criticized several times for being too American, too prone to charging into situations he doesn’t understand, too prone to use violence as a first resort. This criticism is, I suspect, intended to allow us to relax and “get” the joke. But what is the joke? Can you make a morally useful point about the dark, simplistic allure of violence within a game that so cheerfully illustrates what bullets do to a human head?

Let’s also not kid ourselves about what happens even to a sane, well-adjusted person after an entire day of watching faces get shredded by bullets. I played Max Payne 3 in two long sittings. After the end of my first sitting, which lasted around six hours, I went to a dinner party with my girlfriend. I was, she reports, “mouthy” and “agitated” during our dinner, and she wondered what had gotten into me. What had gotten into me was that I was shooting people in the face all afternoon. In this sense, Max Payne 3 is something of an anarchic throwback for Rockstar, especially after the more searching Red Dead Redemption and more accommodating L.A. Noire, which allowed casual players to skip the action parts. Max Payne 3 is a game for the hardest of the hardcore and the strongest of the strong-stomached. When it comes to blood and violence, my video-game stomach is strong indeed, but something about Max Payne 3 made me wonder what on earth had been added to the table creatively with its in extremis kill-cams. It’s not enough, I don’t think, if they’re there only because someone thought they looked cool.

I can’t honestly say that I enjoyed playing Max Payne 3, but I found it utterly riveting and would recommend it without hesitation to the sort of person who likes the sort of experience it provides. As for Max Payne 3‘s ludonarrative dissonance, halfway through the game I decided that the entire story was one long hallucination. There’s internal support for this interpretation of Max Payne 3, especially whenever the screen gets splashed with headachy saturation effects. I started calling these moments “hangover cam,” and imagined that the person I saw and heard on-screen wasn’t Max Payne at all. The real Max Payne was up ahead a chapter or two. My “Max Payne,” whacked out on Vicodin and Jameson, staggered after the real Max, putting bullets in the heads of any wounded and describing himself to himself in grand, black-hearted, nihilist-hero terms.

I’m happy to report that Max Payne 3 becomes much, much funnier if you play it with above narrative schema in mind. What’s interesting is that, viewed this way, it becomes a more weirdly convincing game, too.