The Quest for Mediocrity 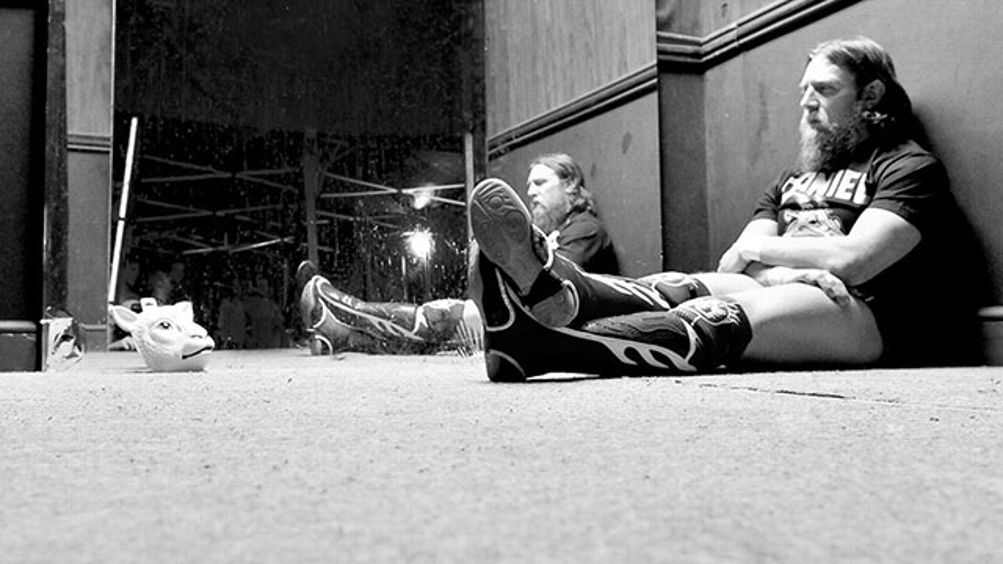 David Shoemaker sat down with WWE superstar Daniel Bryan to talk about Bryan’s remarkable year in 2013.

2013 was a breakout year for you. What went right?

I think teaming with Kane in Team Hell No was really entertaining for the fans. I think WWE fans have always appreciated my wrestling, but they wanted something more as far as personality goes, and Team Hell No really gave them that. And just being given the opportunity to be seen as a main-event guy. For John Cena to pick me as his opponent for the SummerSlam main event was huge for me. That was the biggest opportunity I’ve ever had. Very few people are given that kind of opportunity.

You’re not a prototypical WWE star. You’re smaller than the norm, you were a vegan, you have a shaggy beard, and you’re a self-admitted nice guy. Were wrestling fans asking for a new type of star?

Click here for all of our interviews with fascinating people from the worlds of sports and pop culture.
I think fans always want something new, but they want somebody who can deliver — to go out there and really entertain them and have good matches. And they’re not stuck on big guys anymore. I think people are slowly realizing that some of the smaller guys are really entertaining as far as what we can do in the ring. One of the cool things about wrestling is that it takes a mix. If everybody wrestled like me, it would be boring. If everybody was John Cena’s size and wrestled like him, it would be boring. You need a cast of characters — you need people like the Big Show, CM Punk, John Cena, Daniel Bryan, and the Divas, too. You have to have that mix. It’s like a variety show.

If you look back at the history of the top stars in the WWE, Hulk Hogan was a hero and “Stone Cold” Steve Austin was an antihero. What kind of hero is Daniel Bryan?

Wrestling’s so much more complex than that now, but if I had to describe myself in those terms, I’d say I’m a reluctant hero. If it were up to me, I’d be happy just to go out and do my job. My passion is the wrestling. I never pictured myself in the role I’m in now, but that’s the position I’ve been put in.

You headlined four pay-per-views in a row this year. You’re one of WWE’s biggest stars. When do you feel like you’ve made it?

To be honest, I don’t feel like I’ve made it. But “making it” is different than being satisfied with what you’ve done. If I got hurt today, I’d be very satisfied with what I’ve done, but I would have said that before I even made it to WWE. I was happy with what I accomplished on the independent scene and internationally — it was already much more than what people ever thought I could do and what even I thought I could do. But one of the things that keeps me going is the pursuit of constantly being better, and I haven’t “made it” like I’m at a point where I’m happy to stay at this level. I was actually talking to John Cena about this. He told me Steve Austin talked to him at one show and asked him how things were going, and John said, “The show’s going pretty well.” And Austin looked up at a part of the arena that was tarped off — the building was maybe 90 percent sold out — and he said, “Back when I was here, these arenas were full.” And that motivated John. There’s always something to strive for. So what do I need to do to feel like I’ve made it? I need to be the main-event guy, the top guy, and we need to be selling out every arena every night. Maybe then I’ll feel like I’ve done what I need to do.

In the WWE 2K14 video game, you can go into WrestleMania mode and superstars of today can battle legends from bygone eras. Who is the one legend you would like to face?

For me, the honest answer is Shawn Michaels. It’s sad because I’ve always considered him the best — he trained me — and I’ve never wrestled him. But there’s also the fascination of going back and wrestling somebody like Andre the Giant or the Ultimate Warrior — those guys you grew up watching as a kid just have such a special aura.

You’re at the forefront of the first generation of wrestlers whose whole careers are chronicled on YouTube. Do you think that’s a good thing?

I think it’s a great thing for wrestling fans. When I was in high school, I started getting into Japanese wrestling. For me to watch those matches, I had to order VHS tapes through catalogues, and these tapes were like $20 each. For somebody like me who was baling hay and working at McDonald’s, that was a lot. Now, any match you want to see, you can go online and get. You can go through wrestling history and have the best matches ever at your fingertips.

And for wrestlers, it’s a great promotional tool. If it weren’t for the Internet, WWE probably wouldn’t even know my name. If I had to rely on Pro Wrestling Illustrated to get my name out there, it would have been a much more difficult road. Look at me and CM Punk — we’re from totally different parts of the country, but we ended up wrestling in a lot of the same places because the Internet got our names out there.

Do you ever watch your old matches? Is it ever embarrassing, like looking at an awkward old high school photo?

Oh god, yes. When WWE showed footage of me wrestling at Shawn Michaels’s old promotion, I was like, “Please don’t show this.” It was cool for the story because they had some stuff with me and Shawn, but anybody who goes back and watches their first matches is going to be embarrassed. To put your 18-year-old self on national television — well, it lightens up your ego a little bit. But you know, I didn’t just start out like this. I had to work hard to get good.

If you had to show one match to a non-wrestling fan to impress them, which one would it be?

If I just wanted to entertain somebody, I would probably go with the six-man tag match I had teaming with Kane and Ryback against the Shield at TLC, because it’s a bunch of different characters, it’s action-packed, there’s a bunch of big moments, and hopefully they would go, “Wow, I didn’t know wrestling was like this.” But what I’d really like to show them would be something more dramatic, like the matches I had against Nigel McGuinness or Kenta, or even John Cena at SummerSlam, but those might be too long for somebody who doesn’t watch wrestling.

There are so many differences, but mostly I think it’s in my approach to character. In Ring of Honor, I was doing a thing where I was a master wrestler — that was my character. Now in WWE I’m an underdog, and that’s the way I have to approach my matches. I have to fight from underneath and overcome. It’s the opposite of my last days in the indies, where anybody I wrestled was the underdog, because the fans always expected Bryan Danielson to win. In WWE, the size difference is so much greater, the guys are so much bigger, and that just wouldn’t make sense.

I’m obligated to ask you about the beard. Why did you decide to grow it? Was it your decision or did WWE tell you to?

A lot of things that have worked for me were things I just started doing. When I started doing the “Yes!” thing up and down the ramp, I just did it. Nobody told me to. Same thing with the beard. Honestly, I started growing the beard because I wanted to grow my hair out and thought that the beard would distract people from my hair. And it worked! Somebody from the office came up to me recently and said, “Wow, your hair’s getting long,” and I said, “Yeah, well, it doesn’t happen overnight.”

Obviously, there were beards in sports before yours, but it feels like you were on the cutting edge of this contemporary sort of unironic beardedness. How often do people tweet or email you about other bearded athletes?

All the time. There’s a guy from the Pittsburgh Steelers, Brett Keisel, and Brian Wilson, and Josh Reddick from the Oakland A’s — me and him had a beard-off until he cowardly decided to shave his beard during the middle of the season. Last week somebody told me I looked less like a wrestler and more like I should be the bass player for Mumford & Sons. I just think there are a lot of people who are rebelling against the conventional idea of what’s attractive. And it’s liberating to get up and not shave in the morning.

Are you a different person with the beard? Daniel Bryan seems like a totally different character than he was a couple years ago.

Wrestling is so weird. There are a lot of things you need to set yourself apart. I’m not the guy who’s the biggest, or the guy with six-pack abs, but in the mainstream you need a unique appearance. Especially for kids. I didn’t think about that when I started growing it, but now WWE is selling fake beards, and I see kids wearing them all the time. It’s borderline cartoonish, but they get to be like me, and they love that.

For readers who don’t know, what’s the life of a wrestler like?

We’re on the road 250 days a year. Last year I ended up doing 219 shows. We don’t have an offseason, so week in and week out, we fly out on Friday, we’ll do a show Friday night, Saturday night, Sunday night, all of which are untelevised unless we’re doing a pay-per-view on a Sunday. Then we do a live Raw on Monday, we film SmackDown and Main Event on Tuesday, and then we fly home on Wednesday. So we have half of Wednesday and Thursday to get our stuff repacked, and then we fly back out on Friday. And that’s when we don’t have international tours. If we do, we fly straight out from SmackDown and do an international trip. It’s pretty grueling. But I’ve gotten to see parts of the world I never would have seen. We did two shows in Russia, and I got to stay right across the street from the Kremlin and visit the Red Square. Those are things my dad has never gotten to do. Last April, me and my fiancée, Brie Bella, we got to go to Paris and see the Eiffel Tower as it was closing. I mean, tons of people go to Paris, but we get to go everywhere. The schedule can be taxing, especially for someone like me who’s anti-caffeine. Sustaining your energy can be tough, but the thrills that come with the lifestyle pump you more than any sort of artificial energy ever could.

What’s the best part of the night when you perform?

You know what the best part is? After you’ve had a really good match and the crowd was on their feet the whole time and you finish and you go back and take a shower and you feel completely satisfied. That, to me, is the best part of pro wrestling. When you’ve just finished doing what you love to do and you did it really well.