The Chosen Ones: LeBron and Akron 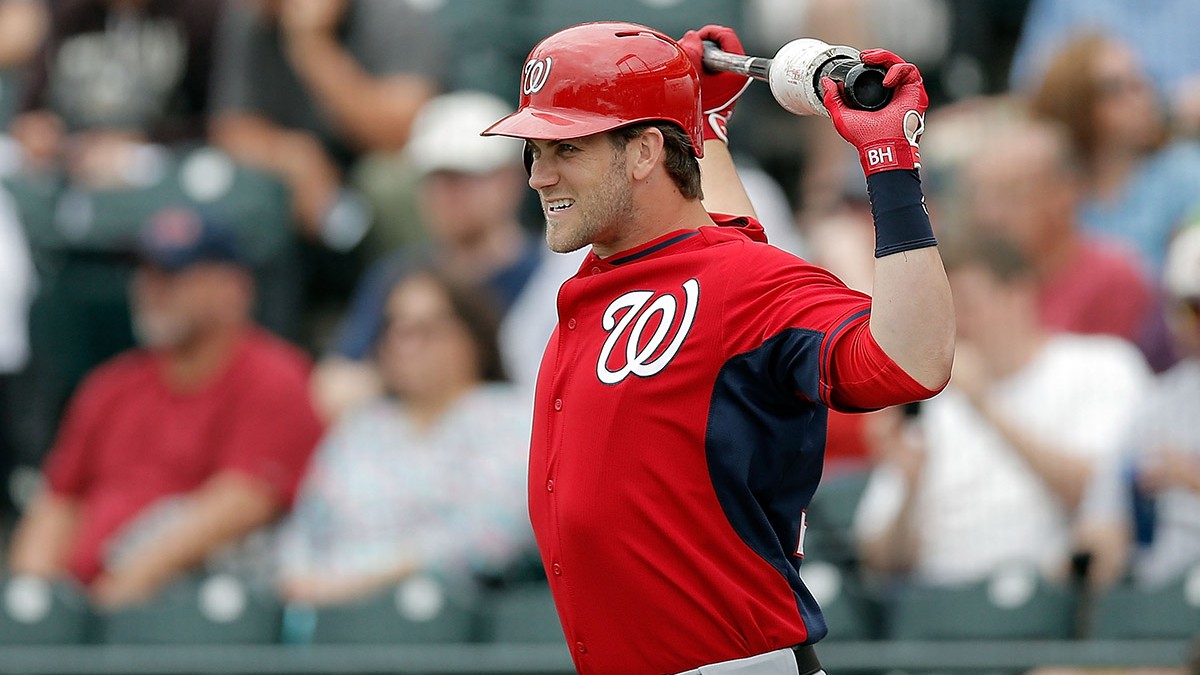 So, let’s just look at him instead. Set the over/under on his home runs based on his biceps. Measure the size of his heart by the size of his quads. It’s March, still spring training, and spring training is not for numbers. Let the accountants busy themselves with taxes. You’re batting .185? It’s OK. Nothing counts right now. You’re just testing things out. You’re healthy. You look like an All-Star. Forget last year’s disappointments. Spring training is for prospects, peanuts, and Cracker Jack. It’s for the sight of reptilian roadkill on the I-4 near Kissimmee. It’s for the long fade of a Florida sky from baby blue to the milky horizon. Spring training is the momentary stay of romance against relentless rationality. Sure, spring training serves important purposes for teams. Rosters are set, rotations are calibrated, cold calculations are made. But as an enduring ritual? Spring training is stubborn old-school baseball’s petty revenge.

Harper’s human element came into spring training looking very strong. I believe the technical term is “jacked,” but let’s avoid jargon. On Monday, in the visiting clubhouse at the Tigers’ spring training stadium in Lakeland, Florida, Harper stood in front of his locker and pulled on a gray T-shirt that barely contained his upper body. Across the chest, it said “PED FREE.” (He’s taken to wearing this shirt a lot.)1 His beard seems particularly au naturel these days. He hasn’t quite reached the class of Jayson Werth, who looks like Jesus-by-way-of–Ron Jon Surf Shop, but Harper is in the ballpark. Seen up close, his beard, like everything about his appearance, has a slightly exaggerated quality. It insists upon itself. 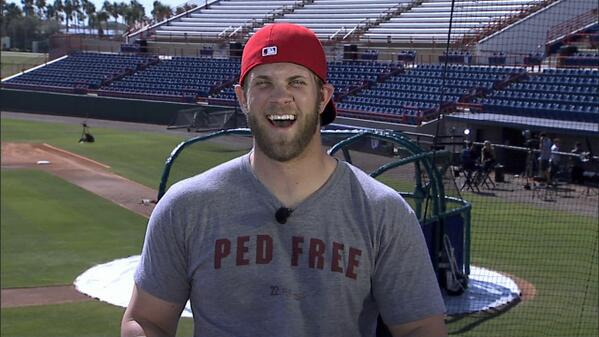 When Harper first arrived at camp, there was much talk about whether he had become, as was his hope, “as big as a house” or merely as big as, say, an RV. Pictures were studied. (Did you see the way he gripped those boxes of Girl Scout cookies?) The merits and dangers of bulking up were debated. The MLB Network ran a story in a segment called “National Concern.” When pressed, Harper politely admitted he thought the attention was a little out of proportion. He’s about 240 pounds now, but expects to drop about 20 pounds over the course of the season. He likes lifting. He says he enjoys lifting big weights. Besides, as he pointed out, people are comparing his body to what it was when he was 17 or 18, when he was drafted. He’s 21 now. Of course he’s grown.

Harper has been dealing with out-of-proportion attention for a long time. That’s what happens when you’re a kid who can hit a ball more than 500 feet. His story has been told 10,000 times: Sports Illustrated cover at 16, top pick in the draft at 18, NL Rookie of the Year at 19. Not to mention the streaming eye black, the brashness, the clown questions, bro — and the doubles stretched to triples, the headfirst slides, the well-timed home runs. This is a guy who responded to getting thrown at with a straight steal of home.

But this attention now is a little different. A little less celebratory, a little less critical, and a lot more anxious. Is he overhyped? Overlooked? Will he get injured? Is he too reckless? Will he live up to his incredible potential? Now? Next year? When? He is, in some ways, unaccountable. The answer to every question inevitably begins: He’s only 21.

There is an awful lot riding on that 21-year-old body. He spent the offseason lifting weights, doing yoga and Pilates, hammering and tempering his body, pushing its limits. But it has limits. It doesn’t matter how many Thin Mints he can crush with his bare hands. He needs to stay healthy. But what happens when he’s not? The funny thing about being 17 or 18 years old is that it’s possible to be aware of what incredible things a body can do without being aware of what it can’t. Harper’s not a kid anymore.

He’d never been hurt before — not like that. The injuries just from running into the outfield wall at Dodger Stadium on May 13, 2013, were bad enough: a cut on his neck that needed 11 stitches, a concussion,2 a jammed left shoulder, a bruised left side. “It was like getting hit by a car or something,” he said on Monday, remembering the pain. He was already banged up after crashing into another wall in Atlanta trying to save a home run two weeks before.

He tried to play through the pain. “It’s time to cowboy up, Pop,” he told his father three days after the collision at Dodger Stadium, and then, that night, hit a 430-foot home run. At first he tried to pass off his misplay as passion. He’d misread the line drive, been turned around, and lost his sense of the field — but running full speed into the outfield wall at Dodger Stadium was just a reflection of his intensity. “I will keep playing this game hard for the rest of my life even if it kills me! Ill never stop! #RespectTheGame,” tweeted Harper. Later, when he went on the disabled list, he admitted to reporters that he should have gone on the DL a month before. Some new part of his left side introduced itself to him with pain every day. He developed bursitis in his knee, some inflammation in the little sac that cushions the bone, which he aggravated with headfirst slides — twice. Harper has an unusually dynamic swing; he loads his weight on his left foot and drives all of it to his right. There’s so much force in that transfer that, as the power moves through his right leg and through his hip and core, his left foot is pulled off the ground. When he couldn’t load the leg, couldn’t trust it, everything — his torque, his rotation, his coordination — was affected. So was the rest of his body. 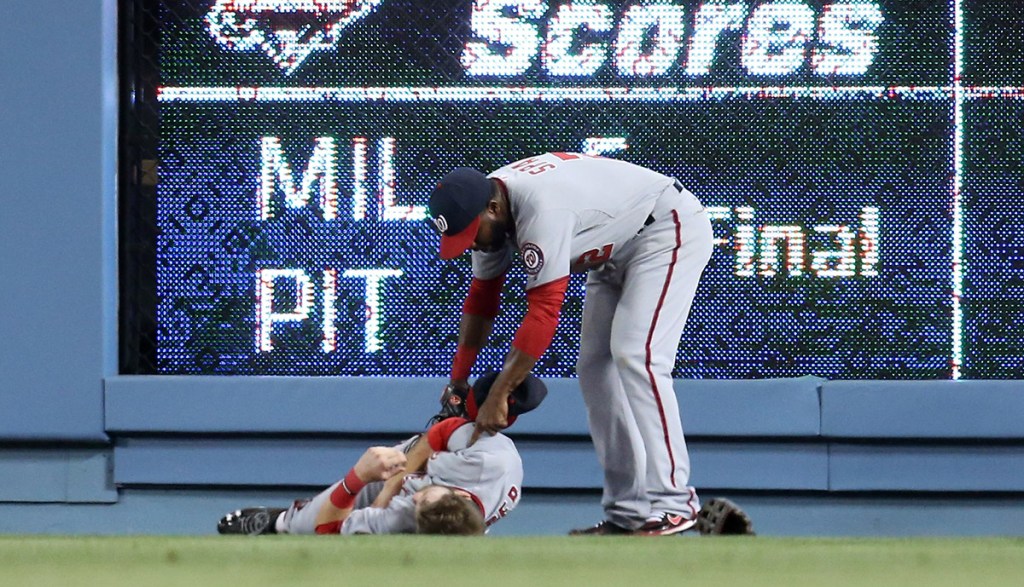 And it affected his head. Not on the field — though immediately after hitting the wall, he was clearly and understandably skittish — but in the batter’s box and on the bench. He wouldn’t say so, of course. I asked him if he’d ever seen a sports psychologist. “Nah. I don’t like doing that. Just go out there and play,” he said, visibly uncomfortable, before adding, “My mental aspect is hanging out with my family.” After being injured, he affected his usual super-confidence, but it was obvious he was struggling. He missed 31 games on the disabled list, homered (of course) in his first at-bat on his return, and then stumbled through the rest of an up-and-down season. The whole team did. The Nationals had come into last year’s spring training saying World Series or bust. They finished 10 games behind Atlanta.

After the season, Harper had knee surgery. “It was a lot worse than a lot of people thought,” he said afterward. “[Dr. Richard Steadman] went in and really saw that it was pretty bad.” I can’t help but hear some defensiveness in that — and some relief. The injury was, to use a Harperian word, legit. He can tell himself, and us, that he’s tough.

Harper wants to put the wall thing behind him. He’s tired of the jokes. “It’s over,” he said. Better yet, maybe the wall can become part of the legend. “Babe Ruth ran into the wall in D.C. in 1920-something and knocked himself out, so I’m in pretty damn good company right there,” Harper told reporters. “He had a good career.” And it’s a true story: In the first game of a doubleheader against the Senators in 1924, Ruth ran into a concrete wall tracking a foul ball — and was knocked out for five minutes. Ruth stayed in the game and played the second one, too.

But maybe — just a guess — Babe Ruth is not typical. The Washington Post’s Thomas Boswell chose a different example: Pete Reiser. Reiser led the league in runs, batting, doubles, triples, total bases, and OPS in 1941, when he was 22. But he ran into the outfield wall seven times, losing consciousness five. He was given last rites on the field. Once, doctors told him he’d die if he was hit in the head again. He still played. “God gave me those legs and the speed,” Boswell quotes Reiser saying, “and when they took me into walls, that’s the way it had to be. I couldn’t play any other way.”

Harper isn’t Ruth, but he’s also not Reiser. He’s learning to listen to his body. “Once my knee went out, my back started hurting, my hip started hurting, because I was trying to overcompensate, because I wanted to be out there every day,” Harper told me. Older and wiser, I thought to myself.

Or maybe not. “And sometimes you got to cowboy up and just do it,” he then added.

“I mean, if you’re in Game 7 of the World Series and you got a broken hand, you just got to do it, you know what I mean? Sometimes you just got to play in pain and do what you gotta do to help your team win.”

But what if your team is out of contention? What if it’s mid-May?

“You gotta be a little smarter.” He stopped and smiled. “Maybe I shouldn’t have done some of the things I did. But it’s part of the game. You can’t look back.”

Harper has that quality few baseball players have. He’s an agent of unpredictability in an orderly sport. He just makes you want to watch. Clutch hitting is not a real thing? There’s no such thing as magic? Fine. But please be quiet when Bryce comes to bat. When he swings, you can see his force. When he runs, you can see his drive.

He changes the metabolism of the game. In a long, low-scoring game against the Tigers in Viera on Sunday, Harper fielded a bloop single, saw Ezequiel Carrera take a wide turn, and fired a throw to first — nearly in time. It did nothing, nothing at all, but send a little electricity through the warm air.

It’s still spring training. The future is perfect. Go with the eye. “I feel great,” Harper said. “My body’s great.”