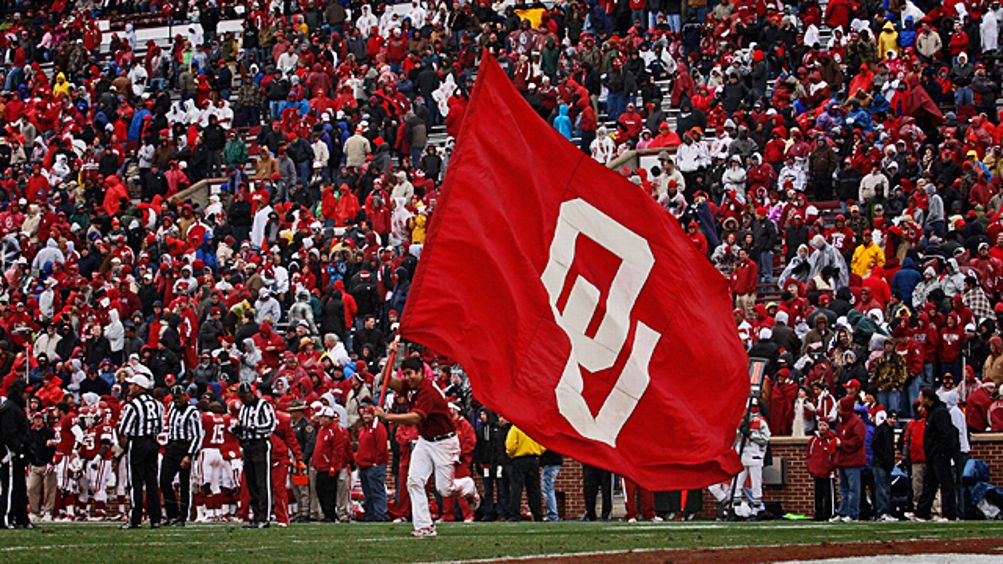 Here’s a list of things you can find at the Barry Switzer Center at the University of Oklahoma: a BCS crystal football. An inspirational quote from John Madden. A Sam Bradford statue. An assistant coach who reads the theologian Dietrich Bonhoeffer.

The coach is Bruce Kittle, who’s in charge of the Sooners’ offensive tackles and tight ends. Kittle appears before me one afternoon with a shaved head and a goatee and an outfit that looks like it was bought that morning at the OU team store. He’s a strange pilgrim in Norman. When Kittle was hired a couple years ago, he’d just returned from a vision quest that spanned two decades and had nothing to do with football. “I wanted to explore some of the unanswered questions the universe presents,” he says. Kittle had spent time as a pastor. A prison mediator. A lawyer. I’ve come to Norman to ask Kittle why he once bolted from college football and how odd it must feel — after exploring the mysteries of the universe — to have returned.

Let’s start at the beginning. In 1981, Kittle was a 290-pound offensive tackle for the Iowa Hawkeyes. He was the kind of thoughtful, tough guy who gets called “head-coaching material.” “Overachiever,” says Oklahoma coach Bob Stoops, a former teammate. Translated: not an All-American, but destined for big things.

After his senior year, Kittle became a graduate assistant on Hayden Fry’s Hawkeyes staff, which produced head coaches like Stoops, Kirk Ferentz (Iowa), Bill Snyder (Kansas State), and Barry Alvarez (Wisconsin). But Kittle looked into his future and didn’t like the path he saw. Graduate assistant … to assistant coach … to coordinator &#133. “I’d answered all the questions football had to offer,” he says.

Up next: law school at Iowa, a clerkship with the U.S. Court of Appeals for the Eighth Circuit, and, eventually, a job at a big firm in Madison, Wisconsin. Lawyer Bruce dropped weight, wore glasses, and had a head full of thick, sandy hair. Greg Lynch, an attorney whom Kittle interviewed for a job around this time, remembers him being reluctant to talk about his football career. It was as if it was a distant memory he’d cut loose.

As a litigator, Kittle sued insurance companies and took on criminal cases pro bono. But he found the lawyer’s life to be as intellectually wanting, and as grueling, as the coach’s. “Bruce was looking at the hours we were putting in,” Ferentz says. “I’m sure he wasn’t considering the hours attorneys were putting in. The Firm wasn’t out yet.”

In his next gig, Kittle began to burrow into the human psyche. He moved to the University of Wisconsin Law School and became the head of its Restorative Justice Project. Restorative justice, which dates to the 1970s in the United States, is a reimagining of the criminal justice system. A crime is not only judged by which rules are broken, but also by what harm is caused. To determine that, a mediator like Kittle arranges for the victim to talk with the offender face-to-face, usually in prison.

It doesn’t always go according to plan. The inmate may stare sullenly at the floor. But ideally, the conversation builds toward a cathartic moment in which the inmate apologizes and the victim offers forgiveness. As Kittle wrote in the journal The World of Forgiveness, “We begin with a posture of hope, a belief in the human dignity of all people, and yes, I dare to say it publicly, love!”

At first, Kittle did small-time mediations: a burglary victim confronting the burglar. “Then I got a request from a sexual-assault victim to meet with the guy who had raped her,” he says. Kittle shuttled back and forth between the woman and the offender, preparing them for the emotionally fraught encounter. Ironically, it was the inmate who was more nervous. “He was worried she was going to scream at him,” Kittle says. Unlike his trial, in which he’d worked to minimize his guilt, this would be the first time the offender faced the human consequences of his crime.

Eventually, the woman sat with the inmate, who wasn’t wearing restraints, for nearly three hours. The apology was dutiful. “It wasn’t a warm-fuzzy deal,” Kittle says. But the inmate answered questions for the victim, who’d blacked out during the attack. “She imagined him to be 6-foot-5, 300 pounds,” Kittle says. “In fact, he wasn’t a very big guy. Having a chance to see him face-to-face, how small he was — the whole thing took the air out of the balloon for her.”

In Wisconsin legal circles, he became known as Saint Bruce. “He doesn’t take over a room, but people just want to be with him,” says Janine Geske, who met Kittle in the 1990s when she was a justice on the Wisconsin Supreme Court. Geske was so enthralled by Kittle that when she left the bench she took up restorative justice work herself. I tell her Kittle is now on the Oklahoma coaching staff. “Holy cow,” Geske says. “He’s reinvented himself again.”

In Norman, Daryl Williams, a Sooners offensive lineman, barrels into Kittle from behind. “Excuse me!” It’s the old accidental-but-on-purpose trick. “My offensive tackles … ” Kimble grumbles. But we were talking about the mysteries of the universe. By 1994, Kittle had begun his third career in eight years. He was giving in, he admits, to a kind of career ADD. But he was also letting his curiosity guide him. He wasn’t just stumbling through life — he was becoming a student of the universe.

As Kittle met crime victims in his restorative justice work, he found that they turned to religion to cope with pain. “It kind of shatters all the preconceived, Easter-Christmasy notions they have of God,” he says. But Kittle, at this point, was an Easter-Christmasy Christian himself. “I don’t know that I’d wrestled with all the theological questions,” he says. “What’s the meaning of the cross? Is the Resurrection for real? Who’s Jesus? All that kind of stuff.” So he decided to change careers again, and that’s how Saint Bruce became Pastor Bruce.

Do you feel God called you to the ministry?, I ask. Kittle laughs. “I was down in Florida doing depositions on a litigation case,” he recalls. “I was reading a book by Dietrich Bonhoeffer. Anyway, I had this little incursion with a Catholic priest.” The priest, who was having a crisis of faith of his own, suddenly grabbed Kittle’s hand and said, “If you hear God’s call, you better take it.”

Kittle took that as a sign from Him. When Kittle got back to Wisconsin, he told the story to his wife, Jan Krieger. “You may have gotten a call,” Jan said, “but I haven’t heard anything.”

For the next four years, Kittle left his family in Madison on Sunday nights and drove his Buick 162 miles to the Chicago Theological Seminary. After spending two days studying, he drove 162 miles back home to teach classes and work on restorative justice. He graduated in 1998.

He jumped to the Iowa Peace Institute, where he did more work on conflict resolution. Oh, and there was the corn and soy bean farm he and his family lived on. “I knew early on that was not one of my callings,” Kittle says.

Next came a job with the Iowa Sixth Judicial District Department of Correctional Services, helping inmates reenter their old hometowns. “Offenders,” Kittle wrote in a 2004 Fellowship magazine article, “often return to our communities without friends, without supportive family, and without the financial and social connections to survive.” Kittle put ex-cons with small groups of community volunteers. They would sit in a circle. A leader (or “keeper”) would pass an instrument (or “talking piece”) to each member of the circle when it was his or her chance to speak. It sounds hokey, but Kittle says the ritual humanized all parties, just like his prison mediations.

In 2007, Kittle took a job at Iowa City’s Faith United Church of Christ. Here, finally, was Pastor Bruce — though with a new passion. “One thing that was high on his agenda was gay rights,” says Randall Nye, Kittle’s brother-in-law. Iowa’s Supreme Court had declared gay marriage legal in 2009, and during the statehouse combat that followed, Kittle and more than 100 other Iowa clergy members signed a letter supporting the decision.

Since I’m meeting Kittle just after Easter, I ask him if during his Pastor Bruce phase he determined whether the Resurrection was real. “I think the body’s gone,” Kittle tells me. “Then I think it’s up to each individual person to decide where the body went … Lots of folks in our church believe [literally] in that. There’s a lot of folks next to us that feel it’s more of a figurative tale.”

Do you lean literal or figurative?, I ask. “Some days I’m literal,” Kittle says. “Some days I’m more figurative.” At first, I’m disappointed that he dodges the question. Then I remember we’re discussing the truth of the Resurrection in the Barry Switzer Center.

By 2008, Kittle’s vision quest had led him through six jobs. But the next one was the most surprising: It was the return of Coach Bruce.

Kittle started coaching his son’s high school football team in Iowa City. He got very into it. “My zealousness for the game,” he says, “was exceeding the attention span of my clientele.” He called Stoops and asked for a reference. Instead, Stoops did one better and gave him a job, hiring him in 2010 as Oklahoma’s recruiting coordinator. Last season, despite the fact that he’d never been a position coach, Stoops put him in charge of the tackles and tight ends.

I’d like to tell you college football welcomed Kittle with open arms. That it saw a rich and promising résumé. That it embraced a man who searches for reservoirs of empathy and forgiveness that are not measured by Rivals.com rankings.

But this is college football, sports fans. When Kittle was hired, Berry Tramel, a sports columnist at The Oklahoman, wrote that he had a “stunning lack of experience for somebody 50 years old, hired to a serious college football staff.” A fan on a Sooners message board moaned, “So we are now hiring friends with no coaching experience? Sweet!!”

College football doesn’t punish intelligence. But it does punish worldliness. A Sooners coach is expected to sell recruits on a narrow vision of the future. One in which the universe begins and ends in Norman, Oklahoma; one in which you will lead a constricted life of studying your playbook, lifting weights, and staying out of trouble. You might not study Bonhoeffer, but you will learn to keep defensive ends out of your pads.

Kittle has hurled himself into selling this vision, says Josh McCuistion, an editor at SoonerScoop.com. He signed Sam Grant, a tight end from Ohio, away from Michigan. For a time, he kept Oklahoma on the radar of Laremy Tunsil, a five-star war daddy who almost no one thinks can be pried out of the Southeast. But Kittle admits that rival coaches are using his résumé against him. They’re pointing out to recruits his lack of “experience” — in the football sense, of course — that 20-year period when he wasn’t putting linemen in the NFL draft.

To fight back, Kittle wrote down his story on paper. “I end up sending it to the guys when we get past first base,” he says. Kittle is attempting a reprogramming. He’s insisting that, even in the Big 12, exploring the mysteries of the universe should be considered valid work. The newest Bruce — Coach Bruce — stands amid the totems of Sooner football and says, “It’s not like I’ve been sitting around … “