A Fate Worse Than Death: That Old Wizards Magic 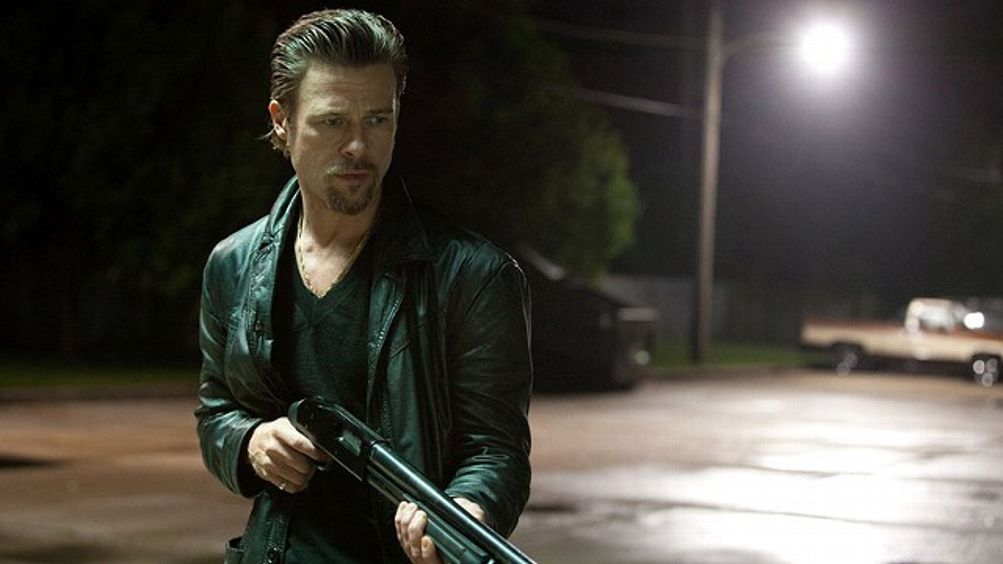 The first thing you hear in Andrew Dominik’s Killing Them Softly is then-Senator Barack Obama making a campaign speech — “This moment, this election, is our chance … to make of our own lives what we will” — and the first thing you see is a trash-strewn New Orleans lot, plastic bags blowing in the foul 2008 breeze. This is not a subtle film. Small-time criminals sweat it out against impending economic collapse; the bewildered and grandiloquent speeches of our nation’s leaders drone on in the background during card-game heists and diner stakeouts. Dominik, last seen ripping melancholy holes in the American frontier myth with The Assassination of Jesse James by the Coward Robert Ford, has something similar, if more contemporary, in mind with Killing Them Softly. “America’s not a country,” sneers one character. “It’s a business. Now fucking pay me.”

Dominik has said he was inspired to write and direct Killing Them Softly, adapted from the George Higgins novel Cogan’s Trade, after catching another Higgins adaptation, 1973’s The Friends of Eddie Coyle, on television one night. The two films have a lot in common: They’re movies about what criminals owe and don’t owe their fellow criminals. Eddie Coyle followed a torn-down Robert Mitchum as he tried in vain to dodge an impending prison sentence; Killing Them Softly concerns an ill-conceived heist and its predictably bloody aftermath. Though Dominik’s film is ostensibly set in the near past, his characters drive the same land-whale ’70s cars — GTOs, Cadillacs, Toronados — and have the same terse, elliptical manner of speaking, the same single-minded obliviousness to any milieu that’s not criminal.

Higgins was obsessed with the inexorable logic of the underworld, the way that world policed itself, the way transgressions were inevitably, even mechanically, punished. And so, in Killing Them Softly, as the American financial system explodes in increasingly panicked dispatches squawking out of TVs and radios, a criminal underworld knits itself back together with bullets. At the behest of a man named the Squirrel (Vincent Curatola, a.k.a. Johnny Sack), two sweaty lowlifes, Frankie (Scoot McNairy) and Russell (Ben Mendelsohn), rob a robbery-prone card game run by Markie Trattman (Ray Liotta). By the rules of their insular world, all of those men are marked for death — even poor Markie. Two contract killers, first Cogan (Brad Pitt) and then Mickey (James Gandolfini), are engaged — at recession prices, we’re told more than once — to come and wash all the disobedient scum off the streets.

It’s funny and gloomy and sort of gross. Frankie and Russell banter about prison sex and bestiality. Gandolfini’s character gets a couple of oblique soliloquies about marriage and jealousy and the pointlessness of existence — “None of this shit means anything anyway,” he says. The violence is of the sustained, hyper-real, last-third-of-Drive variety: shotgun decapitations, slow-motion bullets blowing out the backs of people’s heads, elaborately detailed car crashes. Liotta’s Trattman is beaten on camera for so long, and so loudly, that the bout culminates in him vomiting blood on his assailants’ shoes. The sound effects for this scene are … vivid.

The heavy-handed allegory here will no doubt drive people crazy: a virtuoso crime film spoiled by jarring intrusions from John McCain and Hank Paulson, a long, silent robbery sequence where the only audible noise is George W. Bush melting down on live television. Me, I kind of liked it. Not just for the America-is-a-corrupt-den-of-selfish-wolves message, but also for just how blatant Dominik is in making the point. It’s the intellectual equivalent of a thug repeatedly burying his fist in Ray Liotta’s face at 120 decibels.

Probably because this year’s Oscar season is now beginning in earnest, I’ve been thinking a lot about last year’s Best Picture nominees, how disconnected that slate of movies felt from anything other than an ambient sense of Hollywood self-regard. 2011 was a year of struggle and unemployment and collapsing home values, the year of Occupy Wall Street and Zuccotti Park and the 99 percent. And it was probably just an accident, the way that fall intersected with The Artist and Hugo and War Horse and Midnight in Paris and even Tree of Life — movies that looked back with frank nostalgia to some sort of prelapsarian Europe or America. (Or worse, a prelapsarian movie industry, as if that were a thing that ever existed.) But it felt wrong. It felt oblivious, at a time when to feel oblivious was to feel irresponsible, too.

This year has been different. Probably also an accident, but possibly not. Killing Them Softly opts for an all-caps approach — one criminal complains about an encroaching lack of accountability and “corporate mentality” into the trade; another launches a profane rant about the moral hypocrisy of Thomas Jefferson — but filmmakers have been toying with something soft and rotten in the American consciousness all year. Paul Thomas Anderson’s The Master was about tracing the evolution of a poisonous post-WWII turn away from spiritual faith and community and toward a lonely existence oriented around salesmanship and cynicism. Lincoln was a more optimistic movie that nevertheless took an exacting and sometimes pessimistic view of a political process it depicted as compromised from the very beginning. Argo, until its gleefully single-minded third act, anyway, was expressly ambivalent about the merit of the American project as it played out abroad.

And so on. I’d even include Taken 2 here as a critique of the Ugly American if I thought it was anything but a heedless celebration of Ugly Americans. Zero Dark Thirty (a movie that basically begins in a CIA torture chamber), Promised Land (a Capra-esque lament for bygone American values of stewardship and mini-horse farming), and Quentin Tarantino’s slave-vengeance fantasy Django Unchained all have yet to come.

To go to the movies this year has been to get the occasional glimpse of something toxic and sad that the rest of us have yet to fully acknowledge or admit.

I’m not sure if I believe “recession art” even exists — it feels too convenient, the kind of thing that guys like me make up while writing pieces like this one — but I do believe we owe Reagan for hardcore punk and Nixon for Hunter S. Thompson and George W. Bush for LCD Soundsystem, so maybe it does. To go to the movies this year has been to get the occasional glimpse of something toxic and sad that the rest of us have yet to fully acknowledge or admit. It can take a while for Hollywood to catch up to the present day, but it feels like it’s finally happening. There’s an intimation that whole swaths of our recent unexamined past are about to be skeptically rewritten to fit our present frame. Watching Killing Them Softly, I had the thought that while the film may not be particularly beloved this year — it’s too obvious, too on-the-nose, too grindingly familiar — it will probably be adored in another 10 or 20 years, when the grimy details of our current moment are forgotten but the general foul aura of the last four years remains. In this sense, too, it’s a lot like The Friends of Eddie Coyle, which couldn’t be more 1973 if it had a scene in which Ken Kesey got knifed.

Crime dramas, Dominik writes in a brief, furious director’s statement, comprise “the only genre where it’s completely acceptable that the characters are motivated only by a desire for money. None of this ‘family values,’ ‘follow your dream,’ moral compass bullshit.” Never mind that his constant insertion of the obvious political parallel in Killing Them Softly seems entirely designed to show true north on said compass. It’s an angry film that’s also pointedly irreverent. One shot follows two men as they rough up a guy from one end of a house to the other; the camera stays outside, and for a peaceful moment, all you see is the tranquil exterior of a modest single-family home — until, seconds later, a badly beaten man comes flying out the back of it. It’s a decent metaphor, and a better joke.

Which kind of goes for everything here. Most of Dominik’s men (and they are all men) don’t know just how funny they are: McNairy’s earnest foot soldier, with his Casey Affleck–trademarked indignant Somerville honk; his junkie partner, played by Mendelsohn, who supplies for their big heist bright-yellow dishwashing gloves and a sawed-off shotgun so sawed-off that the shells stick out. Describing a particular enthusiastic sexual encounter, Mendelsohn’s character laments the aftermath, the woman turning over and saying, “I’m gonna kill myself.” Responds McNairy, trying to commiserate, “Aw, they all say that.”

Through these shabby environs strolls Pitt’s Cogan, a better class of criminal, all dirtbag goatee and slicked-back hair. He’ll kill strangers for money but nobody he knows, because that would be “emotional,” he says. “Not fun.” When Gandolfini’s backup hit man arrives at the airport, he touches down to the sound of Nico, like Richie Tenenbaum coming home at last. It’s one of a dozen jarring soundtrack choices — Johnny Cash, “It’s Only a Paper Moon,” “Love Letters” — a winking, winsome song for every heroin injection and shotgun blast. Dominik’s nihilism is unabashed and contagious, and so is the joy he takes in it.