The Collapse of the Red Sox

Why Syracuse Will Win the National Championship 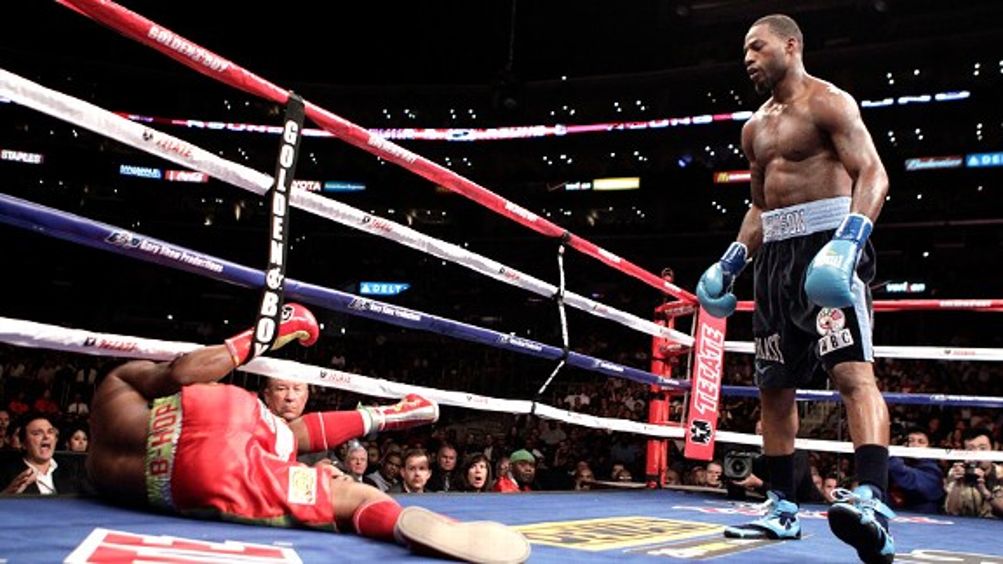 In boxing, big fights come with grand promotional taglines. The Rumble in the Jungle. Thunder and Lightning. Fight of the Millennium. When a bout actually lives up to its epic name it can become enshrined not only in boxing lore but also in the broader historical narrative — the Thrilla in Manila occupies a space in our minds not far from era-defining events of the ’70s like Watergate and the New York blackout of ’77. It feels appropriate, then, that Saturday’s light heavyweight title bout between Bernard Hopkins and Chad Dawson came with the anything-but-epic title “Believe It or Not!”

The name was a borrowed catchphrase from corporate sponsor Ripley Entertainment, proud operators of tourist traps from Times Square to Hollywood Boulevard. If the chorus of boos and “bullshit” chants echoing through the Staples Center after Saturday’s main event were any indication, Ripley would have been wise to avoid associating their brand with Hopkins, Dawson, and boxing as a whole. The fight ended a few moments before the end of the second round with Hopkins on his back, only he wasn’t put there by a Dawson combination. Instead, Dawson had dipped his shoulder into Hopkins, lifted the 46-year-old defending champion, and dumped him on the canvas. When Hopkins landed, he suffered a separated shoulder, although no one watching the fight knew that when it happened. They just saw Hopkins writhing on his back and waited for Michael Buffer to announce the referee’s mysterious decision not to call the takedown a foul, which meant that the fight would be called a TKO in favor of Dawson. By then, the “Believe It or Not!” bill that seemed puzzling earlier in the night took on a new meaning. It was now an apt bit of sarcasm — a way to describe the fiasco that had just gone down in the ring.

Believe it. Leading up to the bout, you didn’t have to be Nostradamus — or even Nastradamus — to see that Hopkins-Dawson would probably be a drag of a fight. Over the years, Hopkins has made winning ugly into an art form, and as he’s gotten older his wins (and losses) have gotten uglier. Now when he fights, you wonder if his goal before each round is to make it impossible to judge. Through a combination of defensive technique, reflexes that have remained sharp, and frequent clinches with his opponent, Hopkins seems like he never gets hurt or even gets hit with a clean punch. Then again, he rarely tries to hurt his opponent.1 It’s as if Hopkins believes that proving to the judges that the other fighter can chase and jab and hook and hold and never faze him is all they need to see to decide Hopkins is the better man. Dawson, for his part, has seemed stuck in second gear for much of his career. He’s a more fluid athlete than just about everyone he faces at light heavyweight, so he lopes around the ring, pawing the air with his jab and moving in to score points with combinations every now and then.

Writers like to use “fireworks” as shorthand for action in a boxing match. Well, Hopkins-Dawson looked like a bout between a decades-old Roman candle you found in grandma’s attic and a bottle rocket that hisses but won’t pop. People who follow boxing expected this before the fight, and that’s where it was headed through two rounds. Dawson measured the air with dozens of aimless jabs and Hopkins mostly kept his distance except to bear-hug Dawson on the few occasions when the action seemed like it might escalate. But this match was destined for a far weirder ending than the 12-round majority decision the fighters were plodding toward, and the signs were there all along.

For starters, this match was held in California, where fights have a way of turning bizarre in a hurry. In May 2010, a junior middleweight fight between Paul Williams and Kermit Cintron at the Home Depot Center in Carson ended in the fourth round, when the fighters’ legs got tangled and Cintron tripped headfirst through the ropes, bounced off a table, and splashed onto the floor. He didn’t seem badly injured, but ringside doctors wouldn’t let Cintron continue and sent him out of the arena on a stretcher with his head strapped between two Styrofoam bookends. The 3½-round fight, in which neither fighter had managed to do much damage, was declared a decision victory for Williams. Sound familiar? If New Jersey is home of the terrible 12-round decision, then California is becoming boxing’s premier destination for fights that end with abrupt, freak injuries. Believe It or Not!

Before Hopkins-Dawson began, we noticed a few basketball-related coincidences: Tim Thomas escorting fellow Paterson, N.J., native Kendall Holt to the ring for an undercard bout, and Carlos Boozer sauntering to ringside in an olive suit. Ha! The NBA avatars of mailing it in and the inactive list were in the house! Oh, wait — that means the harbingers of sports doom were also in the house. Kind of like the pink slime in Ghostbusters II, the more bad athletic karma that found its way inside Staples Center on Saturday night, the more sour the vibes became. If Ricky Davis had snuck into the arena, some poor fighter’s head might have exploded like a watermelon at a Gallagher show.

When the fight was over, after Dawson had tossed Hopkins on the mat, called his opponent a “pussy” for being unable to continue, and then thumped his chest victoriously in front of an irate crowd, things got interesting again. Dawson’s celebration betrayed zero awareness of the fact that the fans might be booing him for his role in the mess. He followed that up with a press conference that would make Mike Tyson proud. While holding his pacifier-sucking toddler in one arm, Dawson shouted down light heavyweight contender Jean Pascal, who handed Dawson his first defeat last year (and whose previous two fights were a draw and a loss to Hopkins): “You lost to a 46-year-old man, brother! Twice! … Sit down with your tight pants!”

The words don’t quite match up to “My style is impetuous, my defense is impregnable, and I’m just ferocious! I want your heart; I wanna eat his children. Praise be to Allah!” But there was a familiar disconnect from reality in Dawson’s behavior. He had just been one-half of a duo that put on an exhibition so disappointing that it inspired chants of “U-F-C!” from a boxing crowd. He was holding his young son behind the lectern. Did he seem a tiny bit contrite, or at least concerned, that fans hadn’t even gotten the mediocre 12-round yawn they expected from the fight? Did he tone down his act for the sake of his son? No, he was already in defending-champ mode, barking at his likely next challenger and cracking jokes about Hopkins’ executioner mask.

A little earlier, in the postfight commotion, Hopkins also abandoned self-awareness. “It should have been a no-contest,” Hopkins said to HBO’s Max Kellerman. “He threw me down, it was a blatant foul. This isn’t the UFC.” He’s damn right it wasn’t. I’m a boxing fan, but I’d rather watch Royce Gracie submit a truck tire than ever see Hopkins and Dawson fight again.