Requiem for a Hardass 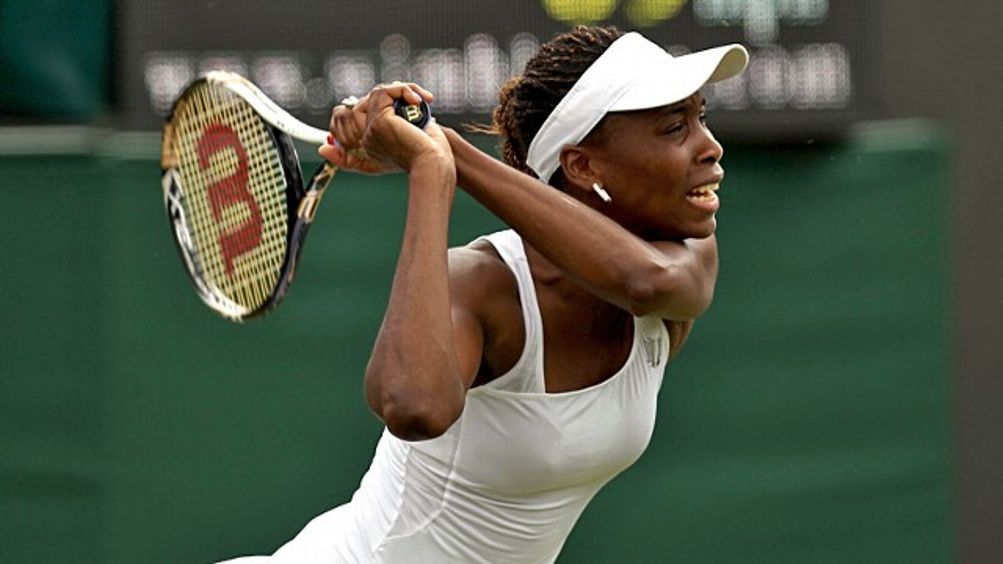 Everyone seemed to agree: It was sad. It was sad to see Venus Williams, a five-time Wimbledon champion, lose yesterday to a 79th-ranked Russian, on grass, on the first day of the tournament, badly. On ESPN, Pam Shriver spoke about the match in hushed, dolorous tones. Venus’s hitting partner told the New York Times how hard it was to witness her play. Recaps, otherwise unadorned, reported the stats with some regret: her first five serves missed; her first five games lost; her 33 percent serving in the first set. Other stories read like full-blown eulogies.

It was sad to see. Even Venus looked sad! She looked positively woeful during the second changeover, staring meaningfully and tragically into the distance. I imagined her miserable, resigned, bewildered, lost — lost at Wimbledon of all places, the place that was supposed to be her oasis. She walked around the court seeming a little cow-hocked, a little lame and listless.

Then again, sometimes that’s just the way she walks.

At the U.S. Open last year, Venus Williams announced that she had been diagnosed with an autoimmune disorder, Sjögren’s syndrome, that depletes her energy and makes it difficult to get out of bed on some days, let alone train and compete as an elite athlete. It’s possible, perhaps probable, that this was one of those days. She clearly had trouble serving consistently, returning strongly, and moving around the court, rarely playing short balls aggressively and rarely coming into net, where she might have had a better chance at dictating play.

During her press conference after the match, after reporters informed her, in not so many words, how sad it was to watch her play, and how maybe the time had come for her to retire, she bridled. Do you blame her? Her voice harsh and slow and self-protective, she gave credit to her opponent, Elena Vesnina, and said she didn’t want to talk about Sjögren’s syndrome. She pointed out that she was not, in fact, dead. And it’s true! She’s not. She’s not even always this bad. She has had better matches, better days, this year. After nearly seven months away from the sport while she learned to cope with her autoimmune disorder, she returned to the tour in March ranked 134th and promptly beat the reigning Wimbledon champion, Petra Kvitova, in Miami. In Rome, she beat the 2011 U.S. Open champion, Sam Stosur. All of her losses in 2012 until yesterday came at the hands of players inside the top 15 (which is a lot more than you can say about most of the other top women). She raised her ranking high enough to qualify for the Olympics. She can’t train as she should and she takes a lot of naps, and it’s unlikely that she will threaten for another major title. But she is still Venus Williams. She’s enigmatic, still proud.

Kim Clijsters insists that she will not be back at Wimbledon next year. “This is it,” she says. She will play through the 2012 U.S. Open, and then she will retire. She has retired before, in 2007. That lasted for just over two years, during which she gave birth to a daughter. Soon after returning, she entered the 2009 U.S. Open and, unseeded and unranked, she won. In 2010, she defended her title in New York, and last year won the Australian Open for her fourth major.

Since she’s come back before, reporters like to tweak her. Surely she’s not for real! No one wants to see the 29-year-old Belgian go. She is beloved by players and fans alike. In Melbourne they call her “Aussie Kim,” ostensibly because she was once engaged to the Australian Lleyton Hewitt, but really because who wouldn’t want her on their side? When a picture of Clijsters hugging Maria Sharapova circulated on Twitter last week, more than one person tweeted that only Kim would have received that kind of affection from the standoffish Russian.

No one wants to see her go, too, because she is a bridge to a different, more stable era of the WTA. When Clijsters was at the top, she was the best. It was very simple and there were no questions. You did not wonder if she could hold on to a lead, or hold her head. It’s tempting to think that she could fill the vacuum and — along with those other stars from the 2000s, Serena and Sharapova — teach the kids a few lessons about how to win. It’s not impossible. When she is healthy, she can beat anyone. At the Australian this year she made it to the semis, where she lost to Victoria Azarenka. Since then she’s been bothered by ankle problems, then her right hip, and, for some time, a nagging abdominal strain. She plays an extremely physical game, relying on her strong legs and core to stabilize her, while using her flexibility to reach difficult shots.

Against the 18th seed, Jelena Jankovic, on Monday, Clijsters played solidly. She did exactly what she needed to do, which was to get out of the way while Jankovic, herself a former no. 1, flew out of control. Clijsters hit strong, occasionally spectacular returns, got her serve in, and forced the point before Jankovic, always nervy, could settle into a rhythm. She was a totally solid pleasure to watch, and when I thought of her retirement, I had a hard time imagining it. She has always seemed so dependable, so reliable, even when injured. But she says she wants to have a bigger family, that she’s too injured, “too old.”

In other words, Clijsters wants to go out on her own terms. That’s the phrase we like to use: “her own terms.” And they are — but they are also ours. No one likes watching a graceful athlete stumble or lose. No one likes to smudge the picture of the champion in her prime — or to be reminded that bodies break down. But that’s about our pictures, our bodies, not so much theirs.

Venus insists she will be back at Wimbledon next year. Maybe, maybe not. She’s always come and gone, always been elusive, and someday she will decide to stop coming.

It has to be painful to lose, and to know that your career is nearing its natural end. Yesterday had to be painful for Venus, but make no mistake: She doesn’t care if it was painful for us. It’s hard for me to imagine that she will keep playing much longer. She has built her year around the Olympics, and the Olympics are just a few weeks away. What comes next? I have no idea.

Clijsters isn’t the only one going out on her own terms. It’s just not clear what Venus’s terms will look like. “There’s no way I’m just going to give up,” Venus said. “That’s just not me. I’m tough, let me tell you, tough as nails.”