Who Is the Next Karl Malone? 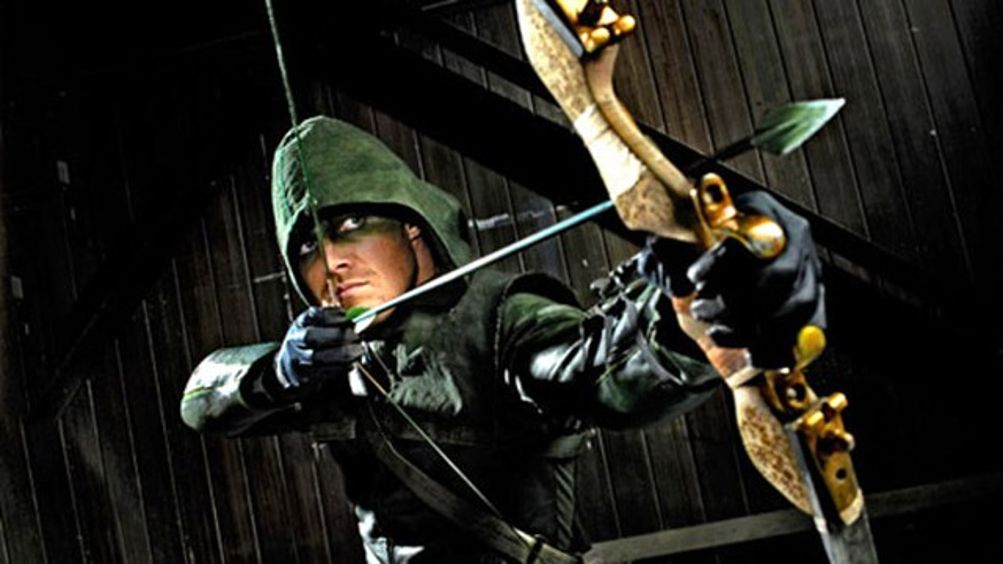 By now, the story is familiar. A troubled landscape filled with ordinary, hardworking professionals — your doctors, your lawyers, your CSIs and NCISes — is overwhelmed by a rising tide of criminals and lowlifes. The people cry out for salvation. Inevitably, a hero emerges from the darkness to help settle the score.

It’s a narrative that’s been played out to perfection in places as diverse as Manhattan, Malibu, and Gotham. So why can’t it seem to happen on TV? Over the last decade, superheroes have become the dominant form of every kind of currency in Hollywood, but they can’t seem to make a dent on television — which is particularly strange when you consider how the broadcast schedule most nights tends to read like a rogues’ gallery. The most beloved TV characters of the last few years are villains, responsible for breaking laws, breaking vows, and just generally breaking bad. Series aren’t green-lit with an eye toward balancing the scales of social justice, but one would think all that wrongdoing might present an opportunity for some caped counterprogramming.1 In fact, with its comic book–like emphasis on world-building and serialization, TV would seem to be a more natural home for the ongoing adventures of assorted masked crusaders. Movies provide the necessary spectacle for legends to be born, but television, which allows for an expansiveness in storytelling that it lacks in budget, could supply a more workmanlike platform for them to thrive.

Unfortunately, TV of late has been less a medium for these sorts of stories and more of a Murderworld; it’s where superheroes go to die. In the past few years alone, Heroes burned bright then flamed out, No Ordinary Family was nothing special, and the less said about David E. Kelley’s horrific Wonder Woman pilot,2 the better. The 2011-12 development cycle was loaded with high-profile comic-book projects, some quite promising on paper, including ABC’s AKA Jessica Jones, ABC Family’s Cloak and Dagger, and FX’s perpetually-in-turnaround Powers.3 None made it out of the negative zone alive. And so, a year after Marvel’s Avengers had the highest-grossing opening weekend in box office history — and just days since Iron Man 3 had the second highest — only one live-action superhero show remains in production: The CW’s Arrow, which will air the penultimate episode of its first season tonight. This is either a point of pride for the struggling netlet or an indictment of an industry: There’s a palpable, yawning wormhole of interest in these types of stories, and only one hour devoted to them. Can Arrow really be considered a bull’s-eye when it’s the only thing that managed to hit the target?

I wish I could say I predicted big things for Arrow when it premiered back in September, but I badly missed the mark. A grim and gritty reimagining of second-tier DC do-gooder Green Arrow — think a rich Robin Hood less into the redistribution of wealth and more into making criminals quiver — Arrow‘s pilot struck me as little more than a minor-key cover of Christopher Nolan’s majorly dour Batman movies. As mysterious billionaire Oliver Queen, Stephen Amell showed more abs than personality, and the decision to burden the character with both a de rigueur set of daddy issues and a mysteriously violent backstory on the most heavily populated deserted island since Lost suggested the common fanboy blunders of mistaking density for weight and gore for heart. The desire for comic-book fans to see themselves and their beloved stories taken seriously is real, but a po-faced solemnity is far from the only way to accomplish it.

Still, for a show I predicted to sink like a stone, Arrow has proven to be remarkably buoyant. With its weekly average of 3 million viewers, it could be considered a hit by more than just the smaller–than–Mister Mxyzptlk standards of its network (it pulls in more viewers than NBC’s heavily hyped Hannibal, for example), and it was easily renewed for a second season in February. Recent episodes have revealed a series not so much finding its groove as settling into it. Lurid and pulpy, Arrow is a brutally effective entertainment, much better than I initially thought but not quite as good as its diehards insist.4 A great deal of the credit goes to Amell, who has a sly humor lurking just beneath his Hollister veneer. Thanks to his performance, Oliver Queen — both in his snotty island flashbacks and slick, nightclub-managing present — is far more interesting than the hooded, bow-hunting vigilante he becomes as soon as the sun sets over Starling City.5 Historically it’s a trademark of Marvel, DC’s rival, to have the secret identity be more compelling than the super heroics, but it’s also necessary considering The CW’s limited funds and ambition. “The life I’m leading now doesn’t leave much room for an actual life,” Amell growls to his loyal bodyguard, Diggle, on a recent episode, though the liveliness in his remarkably well-sculpted eyebrows betrays him.

At times it’s possible to watch as Arrow takes aim at becoming a more ambitious and interesting show, one that engages with notions of urban decay and personal responsibility instead of using them for easy target practice. “Salvation,” the best episode to date, saw Queen chasing down a grieving would-be Bernhard Goetz who was gunning down slumlords before our putative hero had a chance to give them the shaft himself. Neither man appeared particularly heroic, and the script, credited to Buffy veteran Drew Z. Greenberg and Wendy Mericle, didn’t shy away from that fact. But too often Arrow sets the bar low and stoops enthusiastically to meet it: Backstories are awash with secret maps and goofy triads, and potentially interesting supporting roles are drowned in an unchanging sea of bland Canadian cheekbones.6 The most intriguing characters are the ladies in Queen’s life, particularly Emily Bett Rickards as hacker Felicity Smoak and Willa Holland as Oliver’s fast-living sister, Thea. But, as is usually the case with superhero adaptations of any size, the women are invited to the stadium but not allowed onto the field; instead, they’re stuck to the sidelines, emoting and reacting as the boys play with their high-tech toys.7 The person having the most fun by far — although possibly at the expense of the show — is English actor Paul Blackthorne, who plays an American cop like McGruff the Crime Dog gnawing on the leg of Stanley Kowalski. Arrow is improving, but I still found it to be more oppressive than escapist; it lurks in the shadows of its source material instead of seeking out unfamiliar daylight. 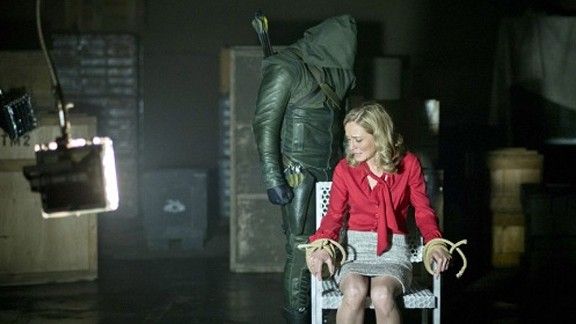 So why is it that superheroes are able to soar on the big screen but so often stumble on the small one? Is there some Kryptonite in the network system that dooms the same stories that dominate the box office to TV’s culty fringes (think Smallville) or to outright failure (think Nightman or, better yet, don’t)? The problem can be traced not to a hero complex but to an inferiority one. TV has long played the meek Clark Kent to cinema’s swaggering Superman and, until recently at least, those who toil in its trenches usually thought that way as well. And so when comic-book stories were anathema in the movies, the airwaves were inundated with inexpensive silliness like Mutant X and M.A.N.T.I.S. When superheroes suddenly became big business,8 television continued to play catch-up, breathlessly pursuing hopeless projects like Aquaman and a reboot of The Incredible Hulk like Thanos in search of the Infinity Gems.9 I say hopeless for two reasons: one, because the CGI spectacle of tentpole movies just isn’t possible within TV’s cheap wigwam, and two, because once again programmers were mistaking the sizzle of heat vision for the steak. The reason Marvel’s shared movie universe made waves was the visual impact of seeing its iconic characters brought to life, sure. But the reason it continues to make money — truly insane, Tony Stark/Warren Worthington amounts of money — is due precisely to the sort of sprawling serialization usually found on TV.10 TV can’t beat movies by fighting over the unwanted crumbs of empire, the dwindling reserves of crime-fighting C-listers. (Matter-Eater Lad: The Series, coming soon to Hulu Minus!) TV can’t beat movies because, in this instance, movies already won by being TV.

But here’s where the Uncle Ben/Jor-El life lesson comes in. Historically the best television never comes from settling for the stories other mediums won’t tell; it occurs when TV champions the stories that other places can’t. ABC seems to have learned that lesson by shifting its development money away from pricey, purple-pantsed projects and toward series that are action-adjacent. Next week the network is likely to announce a pickup for Marvel’s Agents of S.H.I.E.L.D. from Avengers director Joss Whedon; it’s an action hour built around the film universe’s non-powered paramilitary team. At worst, it’ll be JAG with quinjets, helping to spackle the plot holes that keep piling up in the wake of an incessant stream of summer blockbusters. But at best it could provide a kicky glimpse into the challenges of human life on a suddenly superhuman planet. This is rich, unexplored terrain that DC might want to consider as well; Gotham Central, a highly regarded comic focused on Gotham City’s non-Batmen in uniform, has often been bandied about as a potential series, and is well deserving of a shot. From there the possibilities are limitless: Why not Damage Control, a Marvel series about the blue-collar types charged with cleaning up the mess after Thor wrecks Times Square? Or why not leave behind the big two entirely? Concrete, Paul Chadwick’s ethereal and lovely series about an ordinary guy stuck in the stone body of an alien, would make for a wonderful, idiosyncratic television show. It’s a quiet story that inverts the traditional dynamic: There are no villains and, despite odd abilities, the lead is no hero. TV may lack the great power of cinema, but where it has always excelled is in wrestling with great responsibility.