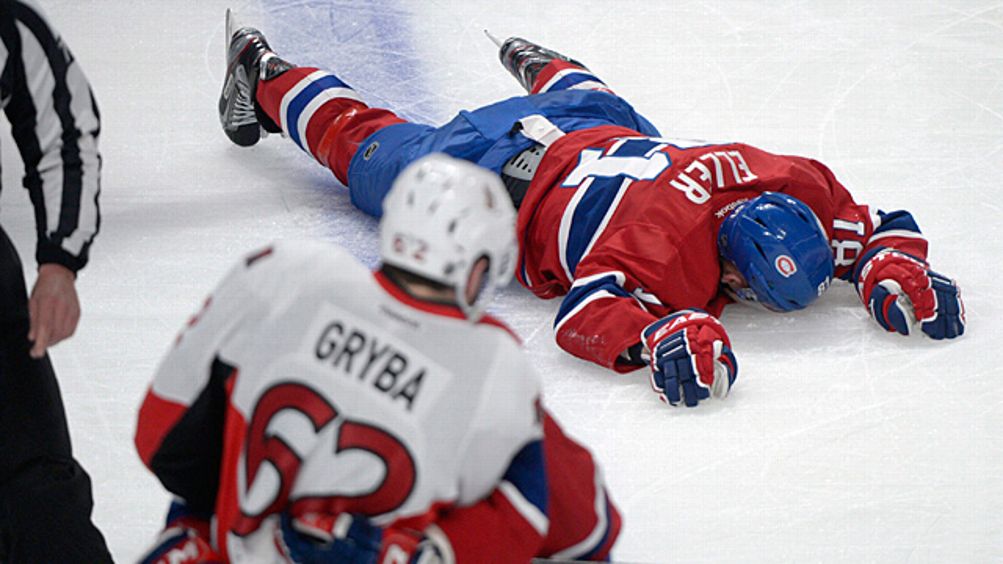 Last week, Lars Eller was hit by Eric Gryba in the first game of the Canadiens-Senators playoff series. Eller, unconscious after impact, was thrown through the air and, unable to break his fall, landed on his face. He was taken from the ice on a stretcher, and suffered a concussion and multiple facial and dental fractures. Gryba received a five-minute major penalty, a game misconduct, and, eventually, a two-game suspension.

As Eller lay bleeding on the ice Thursday night, fans in Montreal’s Bell Centre stood, eyes wide, mouths open, not sure what to feel or think or do. TV commentators searched replay images for a reason, for direction, for certainty.

They wanted the explanation for the injury to be about Eller having his head down, about the Canadiens center being unaware of what any player who has reached the age of bodychecking has to be — must be — aware of.

They wanted it to be about Raphael Diaz, the Canadiens’ defenseman, who had made the “suicide pass” up the middle. If Eller was trying to find open ice, if he had to have his eyes on Diaz and the puck, Diaz had to be Eller’s eyes for the rest of the ice. It was Diaz, not Eller, who had to see Gryba looming.

They wanted it to be about Gryba, who on Tuesday night returned from his suspension for Ottawa’s 3-2 overtime win over Montreal. He may have hit Eller with his shoulder, he may have also made contact with Eller’s body, but principal contact in any real sense, they said, was with Eller’s head.

They wanted it to be about the referees. This was a clean hit. Gryba did nothing wrong. He acted entirely within the rules. This is hockey. You can’t give a penalty just because something bad happened.

Watching at home, I wanted it to be about interference. Eller may have had his head down. Diaz may have given him a suicide pass. Gryba may or may not have made principal contact to Eller’s head. But the referees were right. Eller didn’t have the puck. He was about to have it. He would’ve had it. But he didn’t have it. That’s the point. You can’t hit a player if he’s not in possession of the puck. If he doesn’t have the puck, none of the rest matters. It was interference.

The replays shown that night weren’t conclusive. Other camera angles available the next day were. Eller had touched the puck — he had possession — before the hit. It wasn’t interference.

Yet if some of the decisions made afterward by the referees,1 by NHL senior vice-president of player safety Brendan Shanahan,2 or even the conclusions drawn by the media were technically wrong or contorted, they seemed right. The consequences of the hit, to many, somehow had to matter. The referees penalized Gryba for interference, even though he had committed no infraction. This wasn’t interference. But the referees, somehow, still seemed right. In his reasoned-sounding judgment in suspending Gryba, Shanahan may have split the wrong hairs in concluding that Gryba made principal contact with Eller’s head, but Shanahan, somehow, still seemed right. Commentators argued back and forth with each other, but mostly they argued with themselves — But Eller had his head down … but look at the injuries he suffered … But Diaz fed him a suicide pass … but look at the injuries he suffered … But it was a clean check … but look at the injuries he suffered.

Those who correctly understood and strictly interpreted the NHL rules — former referee Kerry Fraser and Senators coach Paul MacLean among them — somehow seemed wrong. Fraser, now an analyst for TSN, went through an extended, revealing description of how an official makes calls in situations like this. He stressed the split-second demands, an official’s positioning, the difficulty of seeing everything that needed to be seen in such a bang-bang moment — whether it was Gryba’s shoulder or elbow that had made principal or incidental contact with Eller’s head, while at the same time determining whether the puck had touched Eller’s stick in the instant before, after, or at the same time as Gryba’s body had hit Eller’s. And to complicate things, Eller was lying on the ice being treated by medical staff. The referees’ recall of what they had seen, as Fraser put it, was “possibly being muddied by the shocking sight of Eller’s blood.” The implications of Fraser’s comments were that an official has to have the strength of character to focus on the incident and not be distracted by its aftermath. The officials humanly, understandably had been affected, Fraser intimated, and made the incorrect call.

For his part, MacLean, who in his two seasons in Ottawa has done almost everything right, defended his player and his team — “[It was] a hockey play that went bad for Eller” — and missed the emergent point. Fraser and MacLean were right, but Fraser and MacLean seemed wrong.

The referees, Shanahan, the commentators, and the public understood somehow that what they felt was more true than what they knew. As any good judge knows, if the facts make a fool of the law, adapt to the facts, or the facts and the law will make a fool of you. If the outcome is wrong, the rules are wrong. This is about Eller’s injuries, they understood — somehow, ultimately — not just about the rules.

It’s this aftermath to the hit that I’ve found most remarkable. There is an ethic in sports that wasn’t always there. It goes, As a player, I can do what I want to do. I will do what I must do. I will face the consequences of my actions and of the rules. Other players will and must do the same. It is my responsibility to protect myself; it is no one else’s. It is their responsibility to protect themselves; it is not mine. If, out of this, things happen, they happen. I may feel sadness as a human being toward another human being, but sadness is not the point. I will feel no regret. I expect none from others. That’s hockey. That’s life.

There is another ethic in sports that has also always been there, and still is. It is worn as a badge of honor, particularly by the “tough guys.” It goes: I will not hit someone when he is down. I will not hit someone when he is defenseless. There is no courage in that. There is dishonor in the doing. The question in this case: What makes a Gryba hit clean and good on a defenseless Eller when a punch to the face of someone lying on the ice, equally defenseless, is not?