Why Ohio State Will Win the National Championship 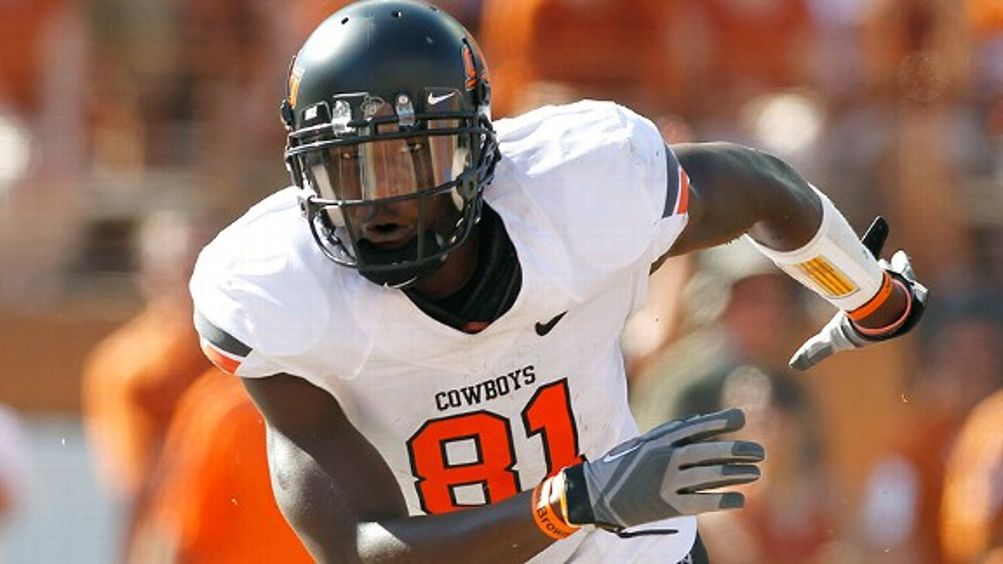 Under the conventions of American sportswriting, there are approximately 36 ways I could begin a profile of Justin Blackmon. I could start with his car or his apartment or his humility or his mom. I could say he has a great smile. I could describe the sun setting over the west end zone at Boone Pickens Stadium, where moments ago he broke yet another receiving record for Oklahoma State. I could write, “The town of Ardmore, Okla., sprawls out across a weather-beaten valley half an hour from the Texas border.” I could write, “It’s 6 p.m. on a Tuesday, and Justin Blackmon is late.”

You’ve read a million profiles of athletes, so you’d understand that each of these openings, or any of the exactly 28 others in the sports-nonfiction copybook, would imply a particular form, with its own beginning, middle, and end. And because you’ve read a million profiles of athletes, whichever template my profile fell into — the whirlwind-life-of-the-star story, the hero-and-his-origins story — would feel very familiar. If I did it right, though, it could still be enjoyable. The first myths are countless thousands of years old, and the first example of New Journalism was written 50 years ago, but if a writer leads with Rajon Rondo practicing jump shots in a deserted high school gym, chances are you’re going to follow.

That familiarity, though — it’s a problem for a player like Blackmon. One of the things I love about college athletics, despite everything, is that talent is distributed so unevenly that a star occasionally comes along who reveals the inadequacy of our language for talking about sports. In the NFL, every player is big and fast and strong, so if the way we describe the best of them becomes a little shopworn, well, we’re only talking about relative degrees of excellence. Watch Justin Blackmon blaze through a gaggle of Division I defensive backs, though, and the disparity is so wide that hyperbole just tops out. Our shared neural network of clichés and metaphors can’t interpret the shock of it. The repertoire of awestruck insults we throw at run-of-the-mill great players — beast, freak, alien, monster — turns out to be helpless in the face of actual awe.

All of which is just to say that while I’m sure Andrew Luck is a fine quarterback and I think Brandon Weeden is criminally underrated,1 watching Justin Blackmon play college football is like watching a merman play water polo. There you are at the water polo meet. You’re looking at water polo teams, teams filled with perfectly good water polo players, human beings who struggle and gasp and thrash around in the water, because water polo is hard, everyone knows that, but they’re trying, and then suddenly this weird ripply streak goes tearing through the water, and you realize after a second that it’s another water polo player, only this one’s in his element, water polo is easy for him, and you’re sort of torn between a water polo fan’s appreciation of good water polo and a Homo sapiens‘ wonderment at the existence of a superior (at least as far as water polo is concerned) species. It’s a form of direct contact with the wellspring of sports fandom, and it makes a lot of other stuff irrelevant. You don’t Google the merman’s stats or wonder about his relationship with his mother.2 You just watch with a feeling like, “Holy f—, look at him go.”

During games, and even in the highlight clips, it’s startling how few of Blackmon’s catches fall into that super-acrobatic, slo-mo-ballet category that we usually associate with the best wide receivers. Oh, he catches balls with defenders hanging off him like Christmas ornaments, he has a Jordanesque vertical leap, and he can contort himself in the air to a degree that’s almost political. But most of the time? He just blasts off. He has this weird tendency to look like he’s running maybe not slower but easier than everyone else, like he’s leaving a couple of gears in reserve, only he still lopes past his man like he’s on a moving walkway at the airport. A lot of his catches occur in what appears to be an implausible amount of open space. Some of that is Oklahoma State’s offensive scheme. But most of it is Blackmon getting open against defenders who can’t really challenge him. On a good day, when he’s in his element, he makes football look like a game with no conflict in it.

You can’t reduce “Holy f—, look at him go” to a prefab sports narrative without losing the utter giddy thrill of it. Blackmon is by all accounts a nice kid who is not — in this day and age, I should probably say not as far as I’ve heard — an exhibit in the continuing moral suicide of college football.3 He doesn’t have anything to lose from a conventional profile. But the minute you stick him in a car that’s 10 minutes late to the interview, or put him back in his hometown, or recall him as a 6-year-old, or whatever, the familiar groove of the narrative carries you out of the immediate joy of what he does on the field.

Blackmon doesn’t need a profile, in other words; he needs an anti-profile. And that might be why, for all the attention he’s gotten the past two seasons, he really hasn’t been adapted to a storyline so far. After all, isn’t the whole effect of a great athlete supposed to be that when you’re watching him, the narrative is the moment?

This is a weird time to be an Oklahoma State fan. A few weeks ago, while trying to explain the ongoing suffering of OSU fans as clinically and matter-of-factly as possible, I posited the existence of a malevolent demon-octopus that dwelled beneath the plains, a dark-hearted creature whose sole purpose was to torment anyone with the ill luck to cheer for the Cowboys. I called this creature “Squinky,” and I wondered if this would be the year when Squinky’s power was finally broken. Well, in the time since I gave Squinky a name, OSU has raced out to the best start (10-0) and best ranking (no. 2) in school history … all while Oklahoma has been wracked by multiple earthquakes, lashed by tornadoes, and pounded by massive thunderstorms. Shortly after the high insanity of the team’s 52-45 win over Kansas State the weekend before last, a 5.6-magnitude quake — the biggest ever in Oklahoma — rocked the state and rattled Boone Pickens Stadium. “That shook up the place,” Blackmon said, “had a lot of people nervous.”

Kansas State-OSU was one of the craziest and most unabashedly fun football games of the year. It felt like an opening-round March Madness game in which both teams refuse to die and unheralded Coloradans keep banking in last-ditch 3-pointers.4 The teams put on a scoring display. The clock ran out with Kansas State on the one-atom line5 and poised for the tying score. Blackmon caught 13 catches for 205 yards and two touchdowns; at one point he fumbled on his way into the end zone, then redeemed himself with a 54-yard fourth-quarter touchdown sprint.

Of course, no one watched this happen, because it took place simultaneously with the Game of All Centuries and None, LSU-Alabama, a crushingly hyped defensive showcase that featured no touchdowns, expired into overtime, and finished with 15 total points. Leaving aside the question of whether a 9-6 game is inherently boring or whether people who like offense are fey communists who don’t even drink Miller Lite, LSU-Bama was clearly, even overwhelmingly, the game the conventional college-football narrative was equipped to handle. No. 1 against no. 2! Two SEC schools6 that are permanent fixtures in the national-championship conversation! Defenses that actually existed in the physical plane! Compared to the stalwart, pundit-ready drama of the SEC, everything about Oklahoma State this season is like some bizarre fever-dream that no one can rationally comprehend.

And that’s why Blackmon is so perfect for this squad, which is essentially the “Holy f—, look at him go” of football teams. It’s also why, even though he’ll be a top-five draft pick and maybe even a star in the NFL,7 he may never land in another situation in which simply watching him can bring you such immediate joy. In the NFL, where there are only 32 teams but approximately 75 million producers of halftime segments, nothing escapes the narrative machine. The story is almost never just the moment. If Blackmon is bad, he’ll be portrayed as a bust. If he’s good, they’ll call him a beast, a freak, and a monster. They’ll tell you about his mom. The sun is setting over the Edward Jones Dome or Mile High or CenturyLink Field. It’s 6 p.m. on a Tuesday, and Justin Blackmon is late.

Previously from Brian Phillips:
How Mario Balotelli Became MARIO BALOTELLI!!!
Tim Tebow, Converter of the Passes
Patti Smith, the Curator of Rock ‘N’ Roll
Ronaldo vs. Messi
Noooo-klahoma!: The misery of rooting for the Oklahoma State Cowboys
Corruption, Murder, and the Beautiful Game: On FIFA’s scandalous history
The Long Autumn of Roger Federer