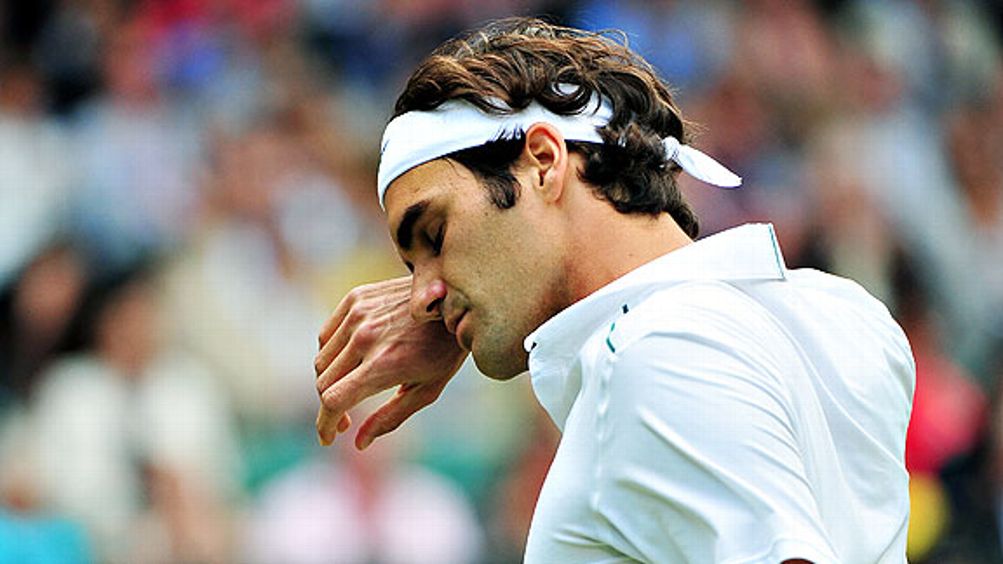 It didn’t feel like an upset. Early in the fourth set, when it started to look like Jo-Wilfried Tsonga had a chance, I thought, “OK, he could win, but to beat Federer he’s going to have to go into a full-blown state of rapture and play the best tennis of his life.” Federer, as you’ve probably heard, was 178-0 when leading by two sets to none in a major. He’d ripped through what felt like the core of Tsonga’s being in the first two sets, soaking up the hard serves, wrong-footing him, wearing the big guy out. Whenever Tsonga did something positive, such as holding serve to force a second-set tiebreak, Federer would do something to turn him around, such as winning the tiebreak 7-3. The Frenchman had taken the third set, but stats and empiricism were both behind his vastly more famous opponent. Tsonga wasn’t out of it, but he’d need to be perfect to win.

As it turned out, perfection wasn’t necessary. Tsonga’s comeback was methodical rather than inspired. That’s not to say he didn’t play very good tennis — he did — but he wasn’t riding on a crazy surge of emotion, which might be why he avoided a fifth-set letdown.1 He just protected his serves, stayed patient, and mixed in some drop shots. A couple of times he got lucky. It was the sort of performance a high-ranking player might turn in to get past an inferior opponent: press your strengths, take your time, let him beat himself.

So before we get to the big questions, the ones about time and doom and greatness,2 let’s state for the record that the better player won. That was the central, and most astonishing, fact about the match. Tsonga started scared, let Federer slide into ghost-mode, and gave up two sets. Then he got it together, realized he was the stronger of the two, and went to work. This wasn’t Oedipal fire and drama; it was an arm-wrestling match in which one guy wobbled a little before smoothly guiding the other guy’s hand to the mat.

Physically, it was an awesome study in opposites. Tsonga on a tennis court is like a linebacker taking ballet — bulky, top-heavy, a little awkward, with an athletic talent that seems like it’s being translated on the fly into the wrong genre.3 Federer is everything you already know Federer to be: lean and princely and completely at home on the court. Tsonga’s a happy, extroverted player who walked off the court grinning and sticking out his tongue. Federer is analytically chilly; even at match point, the only sign that he was in trouble was that he knitted his brows and looked like he was twice as deep in thought.

From the third set on, the difference in styles — the demeanor gap — dictated play. Tsonga tiptoed around the court like Ferdinand the Bull, playing off-balance; at one point, he fell over, then scrambled back up, regained his footing by smacking the ball back at Federer, and wound up winning the point. Again, it wasn’t an overly psyched-up attack, just Tsonga doing his own eccentric thing. Federer, by contrast, played like a puzzled scholar. John McEnroe kept talking about how Federer had no spring in his legs, but he also had no spring in his brain; it was as if he were studying the points and waiting for an insight that never came. At one point my Swiss friend, a longtime Federer fan, sent me an e-mail with one word in French: tétanisé. Paralyzed. Federer was passive when he should have been aggressive, but it was more than that. He looked like he didn’t know what to do.

On the Shakespeare Scale for evaluating athletic performances in terms of their tragic flaws, in other words, Federer rated a full Hamlet. He was indecisive. He was slow to act. He looked like he’d rather be in a grove somewhere getting depressed about epistemology than knifing the motherfucker who X’d his dad.4 And that was genuinely shocking, because … my god, that was Roger Federer. No athlete from my lifetime has been a more natural combination of instinct and intelligence and talent and proficiency and will.

Federer was one of those rare stars who could make you feel like the body had no limits. For a while now, ever since we started saying he was “still good”, we’ve been conscious of the fact that the end of his career was in view. But to see him looking paralyzed, seemingly frozen on the edge of some big, dark thing that no one else could perceive, was a lot more unsettling than the “vague sadness” I wrote about a couple of weeks ago. It was about as close as you can come to watching the fantasy of sports fall apart before your eyes.

Granted, Federer wasn’t standing behind the baseline thinking, “Now I gaze into the abyss beyond understanding.” He was thinking about how much topspin to use, or how to improve his first-serve percentage. But the poet isn’t the man who sits down to breakfast. There was an abyss somewhere, even if it was ours and not Federer’s.

Everything in sports happens before it happens. I don’t know whether this match means the end of Federer’s “still” phase, the end of his career, his last hope to win a major, his tearful retirement, or just a blip on the way to a great run at Flushing Meadows. Nobody can possibly know any of that at this point. But somehow, it’s impossible not to ask whether this is the end. And when you ask a question like that, you essentially answer it, too.

For today — not necessarily forever — Roger Federer is finished. For today, Rafael Nadal has won 17 Grand Slams, including seven Wimbledons, and is widely considered the greatest player of all time. He, Djokovic, and Murray are the exciting trio that make men’s tennis, in Future Chris Fowler’s words, “as compelling as it’s been in a long time.” (Bernard Tomic keeps threatening to crash into the trio, but so far the veterans have kept the younger star at bay.) Even the thought of a Nadal-Djokovic final is enough to get any tennis fan’s heart racing. Federer is a face on a Rolex ad, a highlight montage, and — for today — a memory.