Serge Ibaka Is the Most Important Player in the NBA 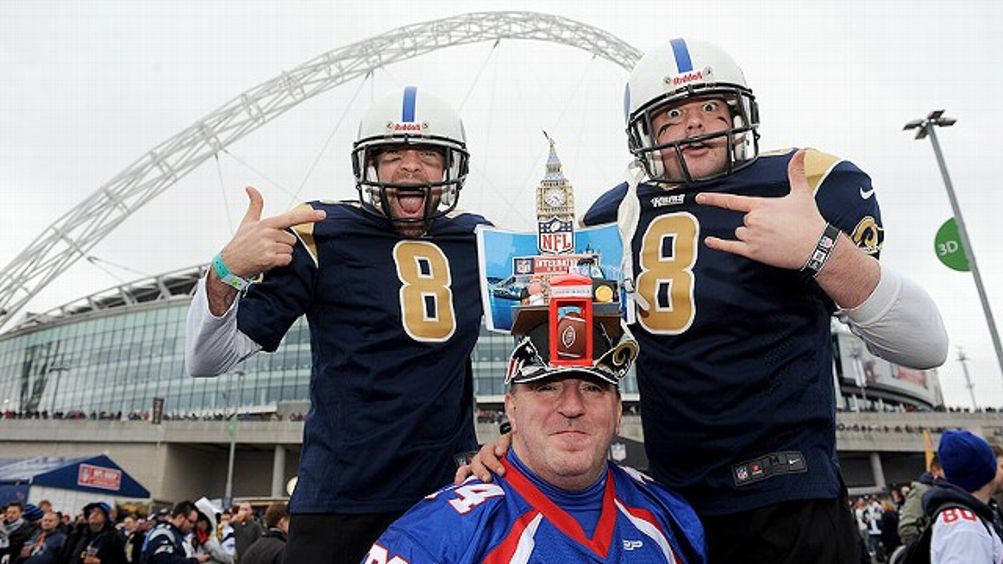 Edging past a fearsome group of Scottish fans in NFL jerseys and kilts, I contemplated my lunch options. Ribs? Foot-long hot dog? Pulled pork? These are not customary dining choices in London, but this didn’t particularly resemble Britain: megasize eats in a parking lot, washed down with overpriced Bud, a shuddering-bass soundtrack of testosterone rock.

Yes, the NFL was back in London, with America supplying the tailgate party and Britain providing the gray skies along with the fans — tens of thousands of them, ogling cheerleaders, bungling attempts to fling footballs, and cheerfully emptying their wallets for official team merchandise before the Patriots trounced the Rams on Sunday.1 This is the sixth year in a row the league has held a regular-season game here. Again, a crowd of more than 80,000 filled Wembley Stadium. Next year, the league doubles its British exports, with two games here. And the chatter increases about a permanent franchise in London.

But it’s fantasy to claim that gridiron has really caught on here.

The NFL does have a passionate subculture of British supporters; some lose sleep to watch simulcasts of Monday Night Football that — with a local kickoff time of 1.30 a.m. — would be better described as Tuesday Dawn Football. Viewership is soaring, the league says. It also claims that Britain — population: 62 million — has an NFL fan base of 11 million people, a notion so at odds with anecdotal observation that one wonders how they define the word “fan.”

Players are even harder to come by. When members of the Rams organization instructed London schoolchildren last week in the art of the spiral and other matters pigskin, the pros found their pupils oblivious. “It was surprising just how little they knew about our game,” Sam Bradford remarked. “Some of the kids, it was the first time they’d ever seen an American football.”

James Laurinaitis, when asked what position he played for St. Louis, informed the children that he was a linebacker. “And they’re like — they have this puzzled look on their face,” he recounted. “They don’t even know what to ask after that.”

The experiment of transplanting America’s favorite sport overseas illustrates the difficulty of internationalizing something as tribal and localized as sporting culture — especially when that sport is football, which so exemplifies the charms and baggage of the United States abroad: bulky, brassy, muscular, sexy, commercial.

The American definition of football first seeped into the British consciousness in the early 1980s, when highlight packages appeared on TV, images of bone-crushing tackles, bouncy pom-pom girls, and physique-swelling equipment that made supermen of guys who were supersize to start. Sunlit American fields, shameless team mascots, and on-field bands were a vivid contrast to the shabby British version of football then available, its soccer stadiums seedy and run-down, plagued with drunkenness and hooliganism.2

The NFL presented a slick and amiable alternative, and its sparkling moment came in 1986 when Mike Ditka’s Bears — champs after crushing the Patriots in Super Bowl XX — played a preseason game in London against Tom Landry’s Cowboys. (The mere mention of “Dallas” then still prompted thoughts of the glamorous TV soap opera, which had obsessed the British.) The Bears won the game and most of the fans, who were dazzled by Chicago’s sneering quarterback Jim McMahon and by the adorable hulk, William “the Refrigerator” Perry. They’d never seen an athlete that big.

Those were times of bad food, bad teeth, a bad mood here. The national propensity to grumble (a wobbly lower counterpart to that stiff upper lip) was ascendant. When Britons traveled to the States, they returned with wondrous tales of the supermarkets, aisles that went on and on, the vastness of everything. “The Fridge” conveyed all this cheery abundance — American heft wasn’t yet such a source of international scorn.

The NFL took note of the football fever and made the event an annual rite, with preseason American Bowl games at Wembley every year till 1993, along with similar exhibitions in Tokyo, Montreal, Berlin, Barcelona, Dublin, Toronto, Sydney, and elsewhere. By the nineties, a new plan arose: NFL Europe, a spring development league of teams based in Germany, the Netherlands, Spain, and the United Kingdom.

British enthusiasts of American football kept playing. But teams varied in quality; several folded for lack of players. In 1998, NFL Europe terminated its sole English team, the Monarchs, whose home games had been averaging fewer than 6,000 spectators. A slow-hiss deflation of NFL Europe followed until its cessation in 2007.3

The NFL shifted strategy: no more second-tier ball on the Continent, but one explosive regular-season game in London. Throngs turned out that first time, as they have for every subsequent outing, suggesting that British demand might justify a team. The Patriots owner, Robert Kraft, has been a vociferous proponent of this, saying the NFL is so popular in its homeland that the only place to expand is outside American borders.

But can you “grow” a sport like any other business?4

The ambitions of the NFL abroad resemble U.S. government attempts to spread its ideals overseas. Start by approaching the most culturally receptive foreign audience, the United Kingdom. Push ahead in the confidence that foreigners, if exposed to U.S. culture, will adopt it as they so often have.

The question is whether the NFL someday reaches a conclusion that many U.S. administrations have: Places will change while Americans and their resources are present. But after they go? It’s not so simple.

The existing sports of Europe have roots in local history, politics, even ethnicity. On a recent trip to the Basque region of Spain — an area with a proud and sometimes violent separatist movement — I found myself in a coffee bar, gazing at a televised sport I couldn’t begin to identify.5 Sports don’t always want to globalize. Sometimes it’s the opposite: They’re about asserting independence.

Many European fans view their teams as communal property, as localized cultural possessions rather than entertainment.6 An American-style franchise system, with teams shifting cities and changing names, is hard to imagine here. You’d risk riots.

The best way to establish a sport abroad is, I suspect, to have an empire. Most of the world’s great games are of British origin not simply because the English, Scots, and Welsh had a knack for inventing them, but because they administered an empire at the right time, before the colonized populations had regulated their own traditional sports. The great irony is that the British invented soccer, tennis, golf, rugby, badminton, squash, even Ping-Pong, only to have their former underlings and imperial rivals thrash them at every one, year after year.

Of late, Britain has halted this trend somewhat. Although the British remain middling at their great love, soccer, they shone during the summer in other sporting pursuits: Rory McIlroy was victorious at the PGA Championship; Bradley Wiggins won the Tour de France; Andy Murray triumphed at the U.S. Open, the first British man to win a Grand Slam since 1936. The apex was the Olympics, where “Team GB” finished third overall, the kingdom’s best showing since London first hosted the Games in 1908, near the peak of its empire.

“For the British public, this requires a new vocabulary of feeling,” Paul Hayward, chief sportswriter for the Daily Telegraph, rhapsodized in an article last month. “You can see people trying to wrench their minds round, away from despair and cynicism. With so much to applaud and admire, sport has ceased to be one of the reasons to be negative about British life.”

Even the statistics office joined in the Olympic jubilation. When announcing last Thursday that Britain had climbed out of recession, it credited part of the improvement to the Games. Politicians are trumpeting this peculiar outbreak of athletic prowess as proof that Brits can compete globally and ought to be more optimistic. The economy, they know, is partly a matter of mass psychology.

In retrospect, excitement over the Bears-Cowboys game in 1986 wasn’t solely because of the quality of American football. It was also due to the frailty of British confidence — the former imperialists were weary and worn. They were hungry for something buoyant, unrestrained, hopeful, shiny, rich. In other words, exactly what they came to enjoy in the years that followed: a thrilling party that transformed the nation, and whose excesses Britain is still paying off.

This is not the same country it was a quarter-century ago. Nor is America viewed as the same promised land.

So, what’s ahead for the NFL in Britain?

The Jacksonville Jaguars (among the least-popular teams in the league) will play a London “home game” for the next four years — a change from the rotating cast of teams that have turned up at Wembley. The league will watch closely to see if the Jaguars become local heroes. If the experiment works, perhaps the NFL might end up with a London Jags franchise.

The team owner, Shad Khan, denies a grand plan. But, he added in remarks published this month: “If you think about it, London is no further from the East Coast teams than San Francisco is. There is no geographic issue.”

However, logistics are a problem. The time difference between San Francisco and London is usually eight hours. Imagine the jet-lag for players. Any team based in London would suffer a serious disadvantage. As the New England press package noted Sunday, the Patriots’ round-trip to London was farther than Green Bay travels all season. An exhausted, losing team in London would not hold fans for long.

Geography aside, the average Briton has not played the game, does not understand the rules, and still thinks of something altogether different when hearing “football.” At an NFL fan rally in Trafalgar Square a day before the game, Tom Brady appeared, to the delight of the gathered supporters. But if, a month from now, he strolled unannounced across the square, would anyone recognize him?

They would. And they’d be American tourists.

An English emcee rallied the crowd at the tailgate party Sunday, inviting volunteers to catch a football and do a touchdown celebration for prizes. Alas, the emcee proved unable to actually fling the ball, his only attempt causing it to sail end-over-end, then fall to the turf.

Does anyone, he asked, know how to throw one of these? A young man pushed through the throng, took the ball, and proceeded to toss perfect spirals. Who was this talented Brit? The man spoke his name into the microphone, reverberating out across the parking lot: “Scott from U.S.A.”

Tom Rachman is the author of The Imperfectionists: A Novel. He lives in London.