The Greatest Team That Never Was

The Glorious Plight of the Buffalo Bills 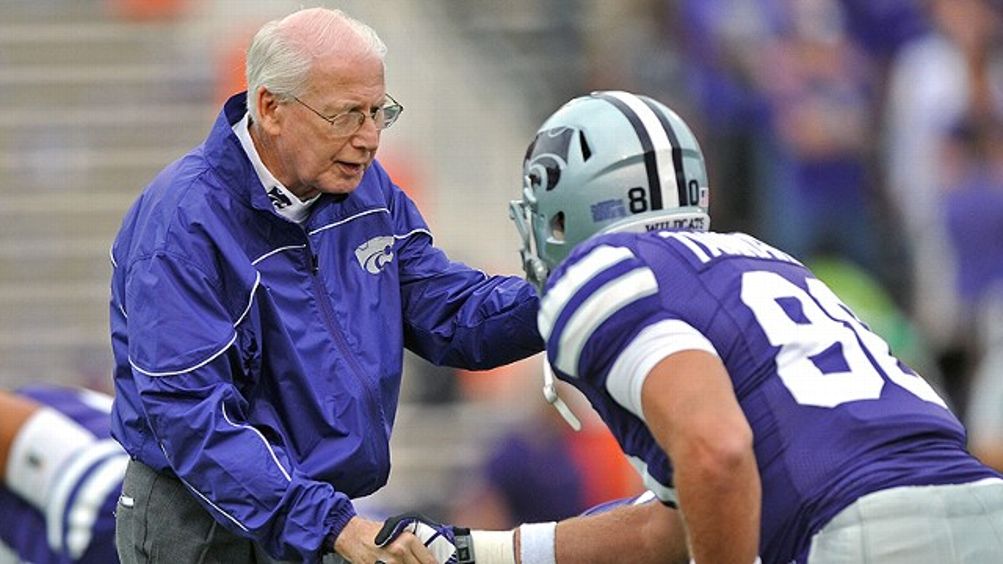 Georgia at Auburn — It’s not your fault if the scheduling gods smile upon you. It’s your fault if you don’t take advantage when the scheduling gods smile upon you. The Bulldogs’ fate could go either way this Saturday. I’d feel better about Auburn’s chances if their starting-quarterback situation were more settled. A few weeks ago coach Gene Chizik and offensive coordinator Scot Loeffler finally moved on from Kiehl Frazier. Poor Kiehl was a huge recruit a couple years back, another dual-threat guy like Cam Newton, but then Auburn switched from a spread to a pro-style offense, and Frazier looked about as lost as a quarterback can look. Chizik switched to Clint Moseley, who then got hurt. Last weekend Auburn beat New Mexico State with freshman QB Jonathan Wallace. This doesn’t bode well, because it’s difficult to run against Georgia. I don’t think a coach can be fired two seasons after winning a national championship. I think it’s, like, a rule or something. So I guess Chizik will be safe despite possibly going 0-8 in SEC play.

Based on Georgia’s knack for inconsistent play and the semblance of pride we assume exists in the Auburn program, there’s a chance this could get interesting. Georgia goes to the SEC championship with a win, and we know what usually happens to SEC champions: They go to the BCS National Championship and beat somebody. The Tide will be waiting in Atlanta, but that won’t stop folks in Athens from dreaming. You don’t play Alabama until you play Alabama. Until then, anything is possible.

Texas A&M at Alabama — I don’t know where you come down on athletes crying, but I enjoy it. I’m comforted when I see salty liquid evidence of emotional investment on a player’s cheek. I became a fan of Alabama QB AJ McCarron in the span of about five minutes last Saturday, because LSU finally forced him to perform under adversity and he came through in the clutch as only a rare few have. And then to see him sobbing in the Death Valley quiet he’d created … At the outset of the game I was rooting for LSU, because like everyone else I’m tired of Saban and his boring excellence, because LSU was the underdog, because the toughness of going on the road in the SEC is something we hold sacred down south — but at the end McCarron won me over.

And Les. Oh, Les Miles. Nonsensical decisions plus incredible luck equals The Mad Hatter. Nonsensical decisions plus an absence of incredible luck equals WHAT THE HELL ARE YOU DOING? That fake field goal?1 Maybe your kicker couldn’t have made it from that distance, so maybe you didn’t take three points off the board. You did, however, lose the chance to run a normal play and pick up the first down. Although wasn’t it odd, then, when you went ahead and attempted a longer field goal? And that onside kick! The antidote to momentum. We’re going to miss you when you’re gone, Coach Miles. We truly are.

Anyway, if Alabama has kept thinking about the LSU game when they ought to have been thinking about Texas A&M, they could easily lose. The Tide will have a letdown. Their energy level on Saturday will not be what it was last weekend. It’s not a matter of if they’ll have a letdown; it’s a matter of the degree of letdown. I wouldn’t be surprised if Alabama found itself down in the second half of this one. A&M has enough talent on defense to disrupt Alabama if the Tide isn’t firing on all cylinders, and they likely won’t be. And on offense the Aggies have dangerous running backs in Christine Michael and Ben Malena, an experienced receiver in Ryan Swope, a good offensive line, and of course Johnny Manziel, who as a redshirt freshman is the scariest offensive college football player in the nation. He’s not just a good runner “for a quarterback” — he looks like a damn punt returner when he breaks out of the pocket. He’s not just a good passer “for a running quarterback” — he’s got touch and arm strength and timing to burn. You can call him Johnny Football. The SEC will call him Johnny Headache.

I have talked in the past about Texas A&M taking the next SEC step, which is to tough out a fourth-quarter win against one of the physical teams in the conference. They got out to first-half leads against both Florida and LSU, then faded while receiving late-stage poundings. This is their chance to break the pattern. I expect the Aggies to get a lead in this game, but the Tide aren’t going to care what happens in the first quarter and neither should A&M. Here’s a piece of advice: Don’t celebrate any first-half scores. At all. If you go up 7-0, jog over to the sideline glumly, as if you understand that touchdown won’t matter, that you’ll have to score one in the fourth quarter and that it will be the one that matters. At halftime, no matter the score, pretend you’re down 10 points. You can do this. You can beat these guys. But you can’t do it in the first half.

Kansas State at TCU — It seems like Kansas State is constantly playing someone pretty good, and here comes another one. There’s a cumulative drag that sets in when a team has to get up for game after game, an emotional and physical fatigue, and I keep waiting for that drag to weigh down Kansas State. It hasn’t yet, but history tells us it will. Unless you’ve got a dog in the national title hunt, you’re probably rooting for the Fighting Snyders, as am I. If Kansas State and coach Bill Snyder make the Big Game, they’ll be easily the most inspiring participants in recent memory. They’re from Manhattan, Kansas, for crying out loud. Here are the Rivals rankings of their recruiting classes for the past four years: 2009, 92nd; 2010, 63rd; 2011, 68th; 2012, 58th.

TCU has recovered quickly from the loss of quarterback Casey Pachall, who left the team to enter rehab. Redshirt freshman Trevone Boykin has capably assumed control of the team. We know TCU is tough. We know Gary Patterson can coach. If Kansas State is going to lose a game, one would expect it to be this one, since KSU’s remaining games are against Baylor, who don’t have a defense, and Texas, whose defense exists but is often dormant. And that last game is in Manhattan, in a stadium named after Kansas State’s current coach.

Alabama is no. 1. After that, I honestly don’t know how I would vote. What I do know is that it’s confusing, and no aspect of the whole mess is more confusing than folks who malign the computer rankings because they can’t account for factors that humans can, like injuries or the occasion of a win or the relative difficulty of playing in one road venue against another or the way a team beats inferior opponents. Isn’t that exactly why you need the computers, so there’s a voice in the system that isn’t influenced by soft variables like how a team looks getting off the bus or how well their recruiting classes have been ranked? Isn’t it important to include an evaluation based solely on a team’s rèsumè? Don’t we Americans like to think merit means more than pedigree and preconception? Maybe I’m in the minority, but I don’t credit the “eye test” as a legitimate method of determining deservedness. Is “eye test” not another way to say beauty contest?

How many good teams did you play and what were the results? If what the computers do is coldly spit out an answer to this question, then I’m all for the computers. The data that factors into the eye test — and this is anything but a new idea, which is why it seems strange that folks aren’t hip to it — depends on the quality of a team’s opponents. The Oregon defense was passing the eye test with flying colors until it played a good offense, at which point it gave up 51 points and failed the eye test. Alabama’s offense was passing the eye test until it played a good defense, at which point it didn’t break 300 yards of total offense until the last two minutes of the game. If Oregon impressed anyone this past weekend, the reason should be that they went on the road and beat a talented team, not that they piled up stats against a weak defense. Should Oregon’s passage of the eye test for pummeling Arizona now be questioned because UCLA pummeled Arizona? No. Beating Arizona should mean exactly what beating Arizona means.

Should it count against the Ducks that their defense gave up more points last Saturday than Alabama’s does in half a season? Nope. How many good teams did you play and what were the results? Should it count against Alabama that they put up the number of yards in 60 minutes against LSU that Oregon usually puts up in a half or even a quarter? No. How many good teams have you played and what were the results? Should it count for or against Notre Dame that they struggled mightily against Pitt? No. They won. The value of the win is determined by how good Pitt is. If Pitt isn’t very good, then the win doesn’t mean much besides the avoidance of a loss.

So let me explain something on behalf of the computers. If your team’s computer ranking isn’t as high as you’d like, if that’s the portion of the checks and balances your squad struggles with, here’s the trouble: You haven’t yet played enough quality opponents. If you don’t have enough quality opponents on your schedule, then your gripe is with your athletic director.

There’s a decent chance the BCS fog will clear in the next few weeks, that USC will beat Notre Dame or beat Oregon in a rematch, or that Kansas State will have an off-day and fall. But there’s also a decent chance the fog won’t clear, or that one fog will clear and another will materialize, like Alabama losing to A&M but still winning the SEC. There’s a very good chance we’ll have more than two deserving teams at season’s end. If it comes to that, I feel terrible for the team that is chosen by the computers based on accomplishment but pushed aside by the humans based on … whatever else.