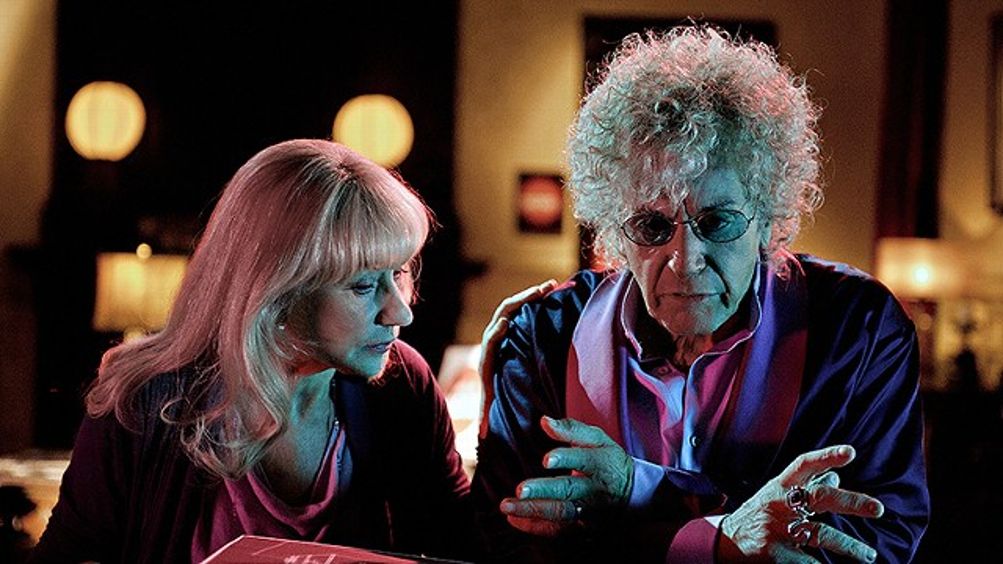 He wears the wig. It’s what you were wondering, right? If Al Pacino, grand and graying hoo-hah of the silver screen, would humble himself for his craft and don the unforgettable flaxen faux-fro worn to court in 2003 by legendary pop producer Phil Spector? The answer is yes, and though it takes a while to arrive, I’m happy to report that the wig is no less stunning now than it was back then. It arrives slowly, like an aging, vengeful Tribble, in the final moments of Phil Spector, the HBO movie debuting this weekend about the Wall of Sound architect’s trial for the murder of B-movie actress Lana Clarkson. Pacino, at 72, is an actor with nothing left to prove. The wig, though; it transforms him. He, like Spector, looks terrible in it, which is challenge enough for the ego of any icon. But when Pacino arrives at the courthouse at the end of the film, proudly bewigged and blown-out like an Afrocentric goldendoodle, that still-flickering ’70s spark threatens to ignite the entire picture. “I wanted to look my best today,” he bellows, and damned if we don’t believe him. It’s classic Pacino, the guy who learned long ago that the hard part of playing the emperor isn’t taking your clothes off. It’s swaggering around absolutely convinced you’re still fully dressed.

It’s telling that Pacino The Actor seems only to emerge these days on television, having some time ago ceded the cinema to Pacino The Stereotype. It’s the latter version who can be seen sleepwalking his way through decrepit cop roles in bombs like 88 Minutes and Righteous Kill and prosciutto-ing it up with Adam Sandler in Jack and Jill. Trading on past glories can be profitable, if not exactly rewarding. On TV — or at least its highbrow cousin, HBO — it’s been a different story. Phil Spector marks the third time in a decade that Pacino has parachuted down to the small screen to sink his teeth into something substantive. He won plaudits and every possible award for his turns as Roy Cohn in 2003’s Angels in America and Jack Kevorkian in 2010’s You Don’t Know Jack, and it’s not hard to imagine the same thing happening here. Though he’s plenty deserving, it says a lot about television’s persistent little-brother syndrome that it continues to throw statues at toe-dipping movie stars like they’re doing charity work — but it says even more about the sorry state of adult filmmaking. Hollywood long ago lost interest in Al Pacino playing a character; it wants the character of Al Pacino. He’s a brand, a shtick, and, increasingly, a replaceable one. If the real deal won’t sign, hell, there’s always a chance Christopher Walken wants to take his wife on an expensive cruise this year.

Although it’s toplined by two Oscar winners — the exquisite Helen Mirren goes bad-hair-day-for-bad-hair-day with Pacino as defense attorney Linda Kenney Baden — Phil Spector, written and directed by Pulitzer Prize winner David Mamet, ticks all the boxes for an instant red light from every major studio in town: It’s a grim true story populated by older actors, with a worrying lack of capes and robots. Despite the salaciousness of the real-life events — reclusive1 pop svengali charged with shooting the star of Barbarian Queen II: The Empress Strikes Back in the mouth — the only guns seen are plastic evidence models and the only superpower involves Mirren flattening both her plummy accent and her cougary beauty to play the sniffling, cynical Kenney Baden. In typical Mamet fashion, everything is razor-planed down to the bare minimum: the sets, the exposition, the adjectives. Even the runtime is more of a sprint, clocking in at a lean 90 minutes. At one point in the film Spector brags of getting dubious radio stations to play “Unchained Melody” — considered draggy at more than three minutes — by changing the label, not the song. One gets the sense that the puritanical Mamet would never stoop so low.

Phil Spector is, in other words, not merely a TV movie but a movie that could now only ever be made for television. This is not necessarily a good thing. For all the talk of TV becoming an auteurist medium — plenty of it blathered by yours truly! — Mamet is the real deal, albeit one currently priced out of the cinema2 and, apparently, bored by his original home, the theater. And it’s still a wonder watching him take to his subject matter like a surgeon, relentlessly scraping away until only the barest of bones are left. Mamet’s best plays — American Buffalo, Glengarry Glen Ross — drill down into the minutiae of an idea with a unique blend of force and precision, using the muscle of his language to expose every raw nerve. But here he seems undone by the weight of reality and the heavy-handedness of his own point of view. Phil Spector opens with a rather strange chyron: It’s “not based on a true story.” Rather, it’s “a drama inspired by actual persons in a trial.” Whatever the legal loopholes Mamet is attempting to maneuver, the fact remains that his trademark drill has become a jackhammer, digging for something that just isn’t there and making a mess in the process.

In real life, the facts of the case are difficult to dispute: Spector kept a small arsenal in his ornate self-described “castle” in Alhambra; the night of Clarkson’s death, his chauffeur testified that his boss cried out “I think I killed someone.” Afterward, a number of women came forward with stories of being held against their will, at gunpoint. His ex-wife, Ronnie, wrote an entire book detailing her abuse and imprisonment at the hands of the man who wrote “Be My Baby” for her. Bruce Cutler, Spector’s third high-priced attorney, played exceptionally in the film by Jeffrey Tambor, removed himself from the case due to “disagreements in strategy” with the well-paying defendant. In other words, Spector was rightly presumed innocent but he wasn’t exactly blameless.

And yet Mamet uses his bullying pulpit to sow seeds of doubt. The film opens with Kenney Baden arriving from New York, sick and skeptical. She’s there to consult for three days in exchange for Cutler paying for the luxury vacation she agreed to cancel. Her other caveat? “I won’t attack the girl.” Mamet, however, demonstrates no such compunction. Lana Clarkson’s ghost haunts the movie like a silly abstraction, a fame-addicted buffoon who inevitably wound up OD’d in the tabloid shooting gallery that is Los Angeles. We see her desperately goony audition tapes (in blackface, no less!) and recoil from the wild-eyed, blood-splashing frenzy of the feminist mob that pickets the trial. The contrast between the spotlight-hungry Clarkson and the flashbulb-shunning Spector — united by twisting tentacles of need and want — that’s a dynamic I’d love to see Mamet sketch out. But the film begins with Clarkson long gone. And what she left behind is, in the writer/director’s rough hands, a polemic.

Mirren — oozing snot and bleakness — does her best with Kenney Baden’s bizarre metamorphosis from grudging defender to true believer even though all it apparently takes to win her over is Spector placing a blanket around her shoulders during her first visit to his claustrophobically trippy sanctum sanctorum. Motivation aside, it’s a wonderful scene, the best in the picture. For 15 uninterrupted minutes, Pacino holds court in little else than a haunted expression and a silk robe, waxing expansively about his real-life heroes Lawrence of Arabia and Lenny Bruce and either flirting or fucking with his new attorney. “First time you got felt up, guess what? You were listening to one of my songs!” he leers. It’s not clear why Kenney Baden — who takes to calling Spector “Phillip,” something he claims not to have heard since his mother’s death — is so charmed by this offensive,3 but even when the food is disagreeable it’s hard to fault such expert cooking. Still, the longer Mamet’s camera lingers on Spector’s bluster — “the Jews didn’t invent the music business … I invented the music business!” “I put black America in the white home!” — the more evident it becomes that the real victim in Phil Spector is Phil Spector.

“They kill men for telling the truth!” Spector rages. But what about the woman who actually was killed?

“He could orchestrate obessiveness and it came out sounding beautiful,” is how one character describes Spector, and the man himself compares his situation to other famously persecuted figures ranging from Jesus Christ to Jimi Hendrix. (The wig, apparently, was an homage to the latter.) Yet the most important comparison is probably the one left unsaid: to Mamet himself, a man who has been accused of being one-note from time to time and whose recent, very public conversion to conservatism was shot through with a noisy strain of righteous victimhood. That aggrieved anger is all over Phil Spector; the script barely allows for the possibility that its protagonist was both a genius and a murderer, that the mania of a singular obsession can often make for the best art and the worst kind of life. “They kill men for telling the truth!” Spector rages. But what about the woman who actually was killed?

Kenney Baden’s case — and, to a degree, Mamet’s — hinges on playing up Clarkson’s supposed midlife depression and playing down Spector’s demons, making him “not an oddity but a beloved eccentric.” And the movie does gain traction with its pursuit of the “blood spatter” defense: suggesting that there was almost no way Spector could have pulled the trigger without splashing crimson all over his outlandish white suit. But, ballistics aside, Phil Spector attempts to acquit its subject for the same celebrity exceptionalism it condemns Clarkson for desiring. “You’re defending the artist” is how he puts it to Kenney Baden, oozing a tragic nobility that only intensifies when the film climaxes with that towering, horrible wig. “I’m an expert at these things,” Pacino mutters. “Putting on a show.”

Mamet once was as well. Almost 20 years ago, with intentionally flammable plays like Oleanna, he raised contrarianism to high art. But here, whether you blame the smallness of his argument or the reduced expectations of the entire project — a movie not big enough for the theaters, an HBO indulgence not rich enough for TV — he merely comes off like a particularly erudite troll. Ultimately, Phil Spector, the film, is undone by the very same thing that caused Phil Spector, the man, to stumble: a slavish devotion to mono in a messy, stereo world.