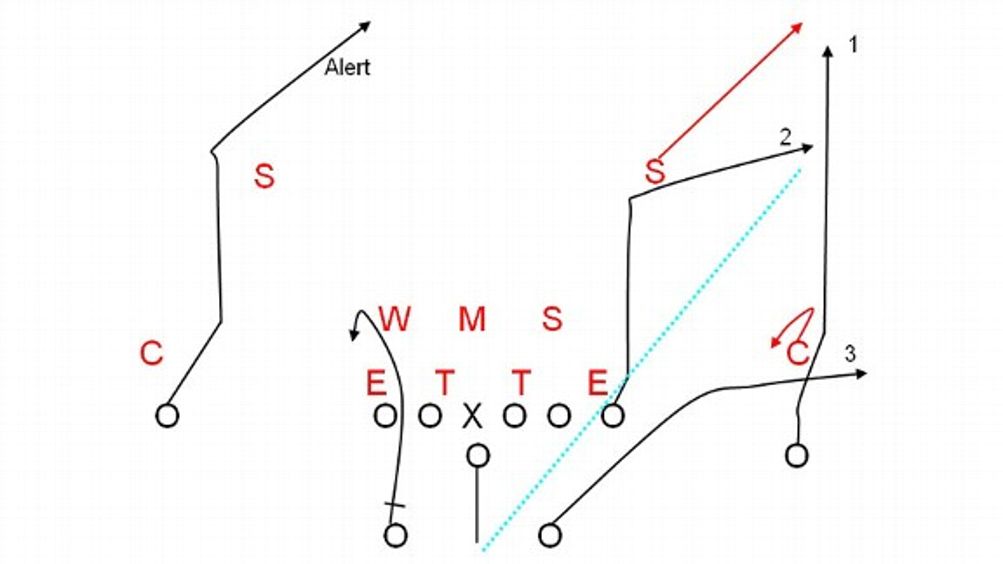 In recent years, it became easy (and sometimes even appropriate) to mock Al Davis and his beloved Oakland Raiders. From the poor on-field results and questionable personnel moves to Davis’ infatuation with speed and his seemingly never-ending quest to find a modern version of the “Mad Bomber,” Daryle Lamonica, the past few years have been ugly. And nothing, perhaps, was uglier than the Raiders’ ill-fated selection of quarterback JaMarcus Russell with the first overall pick of the 2007 NFL draft. Russell had a strong arm, but he ate and robo-tripped sipped sizzurp until he became persona non grata in the NFL. But none of this should overshadow what Davis built and also what he left behind, even if at the end he seemed to be grasping at the shadows of the Raiders’ past success. Among his greatest contributions is the least well understood: the vaunted Raiders “vertical passing game.”

Davis picked up the aerial bug from passing-game guru Sid Gillman when he was one of Gillman’s assistants with the San Diego Chargers in the 1960s. Gillman, the “Father of the Modern Passing Game,” introduced several innovations to the air attack, the first of which was timing. Gillman preached meticulous practice to sync the precise timing between quarterback and receiver, or, more precisely, between the quarterback’s dropback and the receiver’s route. If the quarterback took a five-step drop, the primary receiver had to run his route based on a precise number of steps, such that quarterback would throw the ball before the receiver had turned to look for it. The secondary receiver in the quarterback’s progression ran his route a split second after the first receiver, so that the quarterback could look for the first receiver, reset his feet, then look for the second and still throw before that receiver turned to look for the pass. Nowadays, this emphasis on timing is so universal — in theory if not entirely in practice — that it’s difficult to believe how influential Gillman was in establishing it. His second insight was to understand pass defenses and how to defeat them at a level far beyond the old command to “get open.” Defeating a man-to-man defense, then as now, is about identifying a receiver who can get open versus a particular defender. Zones, on the other hand, require more thought. Gillman realized that the key to defeating zones was spacing between receivers; specifically, if a defense had only four underneath defenders, then five stationary targets — even five trash cans spaced evenly horizontally across the field — are uncoverable. The defenders are outnumbered. Thus, the idea of the zone “stretch” was born.

When Davis left Gillman’s staff he took Sid’s playbook — and, more important, his ideas — with him.1 But Davis wasn’t content to stretch the field horizontally; he wanted to get vertical. If Gillman could get a trash can open against a zone, Davis tested how good he’d do if he added his favorite ingredient: speed. Gillman, of course, used “vertical stretches” — passing concepts that spaced receivers not left to right, but deep to short — but for Davis they became the centerpiece of his offense. Indeed, this is what Davis meant when he brought the “vertical game” to Oakland. It was not a matter of throwing deep bombs (though it was sometimes), but was instead the science of stretching defenses to their breaking point. With receivers at varying depths, a small defensive error often meant a 15-yard pass play for Davis’ offense, and a serious mistake meant a touchdown.

Davis continued to tweak the Gillman offense by adding more formations, adding options for running backs in the passing game, and generally expanding the possibilities of what an offense could do with the football. This was innovative stuff, so much so that it had an outsize effect on a young Raiders assistant coach by the name of Bill Walsh, who went on to craft his own multi-Super Bowl-winning offense with the 49ers that looked a lot like what Davis had created in Oakland. As Walsh explained in his book Building a Champion:

“[Al Davis’] pass offense included an almost unlimited variety of pass patterns as well as a system of calling them, and utilized the backs and tight ends much more extensively than other offenses. … To develop an understanding of it took time, but once learned, it was invaluable.”

This is not the description of the Al Davis offense you usually see — as some kind of simplistic, backyard, “heave it up” strategy. Sure, Al wanted to hit the long ball, but it was all part of his system. Al Davis’ “vertical game” was, in short, built on stretching the defense vertically while using all available receivers — deep, intermediate, and short — to take what the defense gave up anywhere on the field. It’s not Al’s fault that defenses often yielded big plays to the Raiders.

In Davis’ offense, as is the case today, the ultimate vertical stretch passes are true “flood” or three-level vertical stretches, with one receiver deep, another at an intermediate depth, and a third short. Pass defenses generally have only two layers of defenders — deep safeties and underneath coverage players — so when there are receivers at three depths it is extremely difficult to cover them all. For example, Davis’ early Raiders teams often used the “strongside flood” route, a pass concept still popular today. On the play, an outside receiver runs a “go” route straight upfield, trying to beat his defender deep and otherwise taking the coverage with him. An inside receiver — here the tight end — runs a corner route at 15 yards, breaking to the sideline while an underneath receiver — here the running back — runs to the flat. On the backside, the outside receiver runs a post route as an “alert” for the quarterback. He’s not the primary read, but if the deep defenders overreact to the three receivers to the right, the home run shot is always available. Because the defense has only two defenders (the corner and the safety) to cover three receivers, it shouldn’t be able to defend the play. Al’s secret — and it is the same secret Gillman discovered and Walsh extended — is that the surest way to hit those deep passes is to consistently hit the underneath ones. 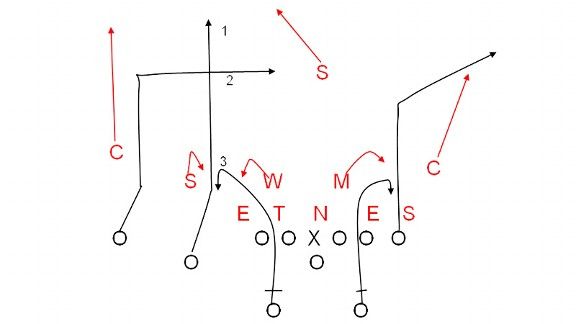 Davis also pioneered the use of “slot” formations, in which the tight end lines up to one side by himself, and two split receivers position themselves to the opposite side. From this they could run all manner of vertical stretches, but one the Raiders used quite well (and which many teams also use today) began with the slot receiver running vertically downfield and the outside receiver on a deep square-in or “dig” route. This pattern more directly attacked the deep safeties and linebackers, defenders Davis knew would be vulnerable to his fleet-footed receivers. 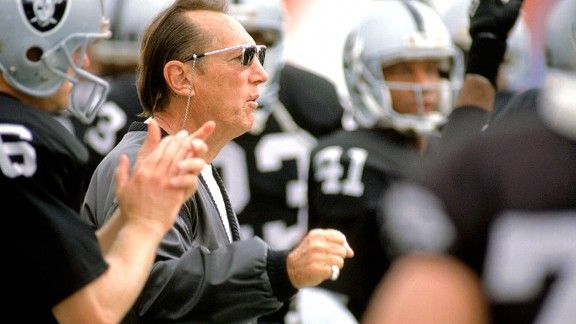 These vertical stretch passes help explain why Davis became obsessed with speed. Obviously, speed gives a vertical receiver a chance to get behind the defense, but, even if he does not actually get open, he still stretches the defense, thus opening up the entire field. Speed distorts defenses, forcing them to cover wider swaths of the field, and thus exposing the weak defenders and the voids around them. If Davis could have a receiver like Warren Wells, who in 1969 totaled 1,260 yards on only 47 catches for the Raiders — a staggering 26.8 yards per completion — then his other receivers would have plenty of room to roam.

And yet, while Davis may have been hooked on speed and the vertical game, those addictions weren’t responsible for the Raiders’ struggles in recent years. Instead, the Raiders have been derailed by weaknesses at the two most important positions for implementing Davis’ vision as owner: head coach and quarterback. Throughout the 1970s, Davis had John Madden, a coach who could make Raiders football a reality. And for more than a decade Oakland had two quarterbacks, the “Mad Bomber” Lamonica and Ken Stabler, who could execute the sophisticated vertical passing game the way Davis wanted.

But long after Madden, Lamonica, and Stabler left the Raiders, Davis remained. As the years went on, Davis couldn’t expect his coaches to run the offense exactly as he’d taught it to Bill Walsh — nor did he want them to, at least not exactly. But he always knew how he wanted it to look, and at times the Raiders achieved something close to the brilliance that had once been the norm. In football, great teams and great organizations exist only in the moments before the next signing season or injury or retirement, or even the next death. It’s simply not reasonable to expect what Davis accomplished early in his Raiders career to continue into perpetuity. But, despite whatever bitterness or decay emanated from the Raiders in recent years, the fact remains that Davis gave all of us more than we gave him. He didn’t just mold his football team and his coaches and his players in his image — he molded the game itself.