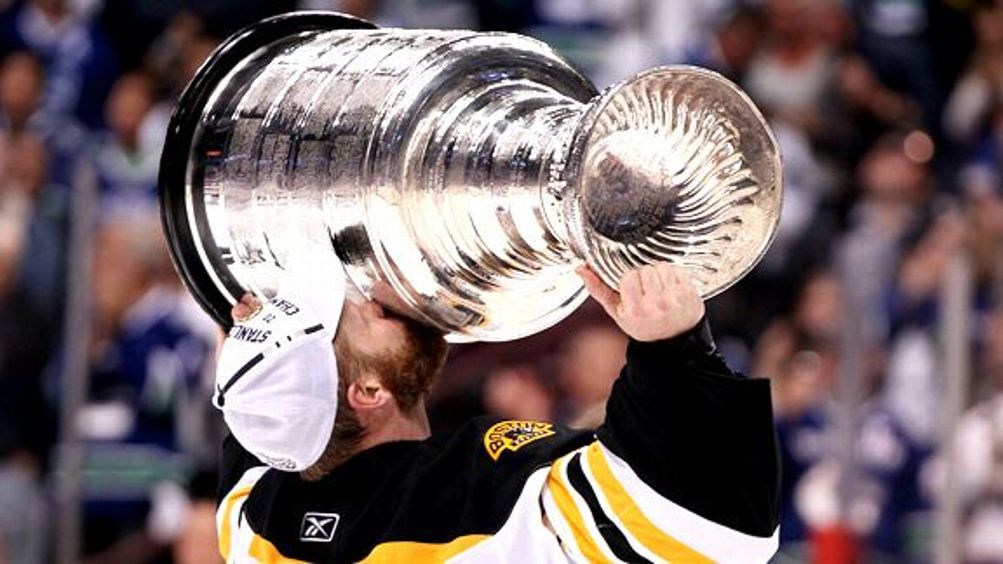 T he first sporting event I remember watching: Game 6 of the 1974 Stanley Cup finals, when Bobby Orr and the Bruins played the Broad Street Bullies in Philly. Eight months earlier, my father bought one season ticket for the Celtics, a team that eventually beat Milwaukee for the 1974 NBA title. You’d think they would have given me my first sports memory. Nope. I’m a blank slate until Game 6 against the Flyers.1

Thirty-seven years later, the Bruins played another deciding game on the road with another Cup on the line. This time around, they finally found their own Bernie Parent: 37-year-old Tim Thomas, who morphed into a bearded octopus and throttled the supposedly explosive Canucks offense.

Thomas started all 25 playoff games, won three Game 7s (two by shutout) and gave up eight goals total in his last eight playoff games. I always thought the defining “Boston star who caught fire and carried his team to a title” example would be David Ortiz in 2004, but Thomas forged his way into that conversation for the rest of eternity. As my giddy father gushed afterwards in genuine disbelief, “We’ve NEVER had the hot goalie before! I can’t even process this!”2

That his career seemed to be over last spring, or headed that way, made it even more improbable. Bruins fans had sampled the “Tim Thomas, Playoff Goalie” experience in 2008 (lost Game 7 to Montreal) and 2009 (lost Game 7 to Carolina). During last spring’s historic collapse to Philly in Round 2, Thomas watched from the bench as Tuukka Rask gave up 15 goals in the last four games (all losses), winning this year’s job back almost by default. Thomas submitted a sterling 2011 regular season that looked a lot like his sterling 2009 regular season; throwing in the past 40 years of the franchise’s history with goalies, you couldn’t blame any Bruins fan for doubting that Thomas would change things.

The “hot goalie” subject has always been a sore one for Bruins fans, a little like how Mets fans assume their pitchers can’t throw no-hitters and Cleveland/Buffalo/Minnesota fans always assume they’ll get kicked in the teeth even when things are looking fantastic. Back in 1971, the Bruins defended their 1970 title by ripping through the league: 57 wins, 121 points, a record 399 goals (nobody else scored more than 259), the top-four point-getters (Phil Esposito, Bobby Orr, Johnny Bucyk, and Ken Hodge), and iconic records set by Esposito (most goals, most points) and Orr (most assists, most points by a defenseman). Both Esposito (152) and Orr (139) broke the points record. For whatever reason, their first-round series against Montreal drifted to a seventh game, then a rookie named Ken Dryden totally stoned them.

Greatest Season Ever … gone. Thanks for playing.

Three years later, Parent did it to the Bruins again. Dryden knocked them out another four times after that; if there’s a defining Bruins goalie image from the ’70s, it’s Guy Lafleur ripping that heartbreaking one-timer past Gilles Gilbert in the Too Many Men On The Ice Game, Gilbert reacting a second late, then sprawling backwards and lying on the ice like LaFleur had shot him. Which I wish he had.

The 1983 Bruins thought they finally had the hot goalie: Pete Peeters, who won the Vezina that year … then got steamrolled by the Islanders dynasty. The 1984 Bruins had the best record in the Wales, then got swept in Round 1 by — you guessed it — Montreal, scoring just two goals against rookie Steve Penney (who had played four career regular-season games). On and on it went. Reggie Lemelin randomly caught fire in the 1988 playoffs, then got annihilated by Gretzky’s last great Oilers team in the finals. Andy Moog played really well during the 1990 Cup run, just not quite as well as Edmonton’s Bill Ranford … who, of course, was a former Bruins prospect. The ’94 Bruins were the last hockey team I followed diligently; that’s when Jon Casey and his “technicolor five-hole” (as the Boston Globe‘s Kevin Paul Dupont derisively named it) melted down against Brodeur and the Devils. Typical.

Since then, the Bruins have started playoff goalies named Blaine Lacher, Bill Ranford (of course he came back, and of course he wasn’t as good), Byron Dafoe, Jeff Hackett & Steve Shields (they shared duties in 2003 in what should have been a TNT dramedy about two lousy goalies called “Hackett and Shields”), Andrew Raycroft, Thomas, Rask, then Thomas again this spring. And that’s when things flipped. Thomas outdueled a Canadiens goalie (Carey Price) in three Round 1 overtime games (4, 5, and 7), a possible sign of the apocalypse.3 In Round 2, the Bruins swept Philly for a variety of reasons, one of which was that the Flyers were juggling two dudes named Boucher & Bobrovsky (another bad TNT drama) between the pipes. In Round 3’s seven-game war against Tampa, the Lightning pulled Dwayne Roloson for Mike Smith in Game 4, came back to win, started Smith in Game 5 (a loss), then went back to Roloson for Games 6 and 7 (with Thomas beating him, 1-0). In the finals, Vancouver’s Roberto Luongo fell apart in Boston during Games 3 and 4 (12 goals in four-plus periods), rallied for Game 5 (a shutout), then got pulled 10 minutes into Game 6.

And if you want to know the truth, that’s what every Bruins fan was banking on in Game 7: Thomas coming through, and more importantly, Luongo not coming through. Bruins fans recognized that pit in the stomach of Vancouver fans, when you’re saddled with a shaky goalie, when you keep telling yourself that hockey is a team sport and saying all the right things … and yet, that fucking goalie is still staring at you, the weak link, the fresh fish, the one you know you can’t trust. In “Reservoir Dogs” there’s that scene right before the final shootout when Joe Cabot (the mob boss) declares that Mr. Orange had to be the leak. Why? He was the only one I wasn’t 100 percent on. That was Luongo for Canucks fans. He was Mr. Orange.4

A few hours later, the Bruins were hoisting the Cup for the first time in 39 years. What’s weird is that they had already won: After fading into the background locally starting in the mid-1990s (because of the front office, because of the teams, and because people just didn’t like watching hockey as much), then bottoming out in 2001 (when Boston threw a parade for Ray Bourque for winning a Cup with Colorado) and again during the devastating lockout, the Bruins spent the past few years slowly rebuilding their old bond with Boston fans. In the 1970s, they were the top dog locally, more beloved than the Celtics, the Patriots, and even the Red Sox. Orr resonated with locals in a way Bill Russell never could; as my father explained later, you stayed home to watch him. Hockey rinks started popping up around Massachusetts like Dunkin’ Donuts franchises. Everyone played street hockey. Everyone wanted to be Bobby. Everyone imitated Fred Cusick screaming, “SCORRRRRRRRRE! BOBBY ORR!” Everyone wanted this card, and this one, and this one, and this one. Nobody had another favorite Bruin. It was always Bobby. After his ravaged knees forced him to retire, Bobby Orr Night featured a 10-minute standing ovation, many tears, and an emotional highlight video with Carly Simon singing “Nobody Does It Better.” Everyone was choked up. Everyone.

If you went to school in Massachusetts in the 1970s and 1980s, the Bruins ingrained themselves in your DNA because of no. 4 and everything he launched. These past few Bruins teams captured a new generation of fans and pulled back many of the older fans who had drifted away (including me), as evidenced by the local ratings for this month’s finals (which beat the 2010 NBA Finals). I grew up loving Bobby, Espo, O’Reilly, Jonathan, and Wensink; now you have 13-and-under fans falling for Lucic, Marchand, Chara, Thomas, and Bergeron the same way. Lurking over everything were the true die-hards, the ones who never abandoned the team (or hockey) during its darkest days, the ones who returned right after the lockout like nothing ever happened. Once considered loyal saps, they were the happiest of anyone last night.5

My father was one of those loyal saps. His wanted to see the Bruins hoist the Cup one more time and assumed it would never happen because, you know, it was the Bruins. It finally happened last night in Vancouver; the first Bruin who grabbed it, 6-foot-9 Zdeno Chara, held it higher than any hockey player before him. That’s one of hockey’s trump cards, everything that happens right after a team wins the championship: starting with everyone racing happily towards the winning goalie and throwing their sticks and gloves in the air, continuing with the fascinating handshake line (when all bad blood from the series mysteriously disappears), then culminating with the emotional Cup ceremony and the signature team picture at mid-ice.

Unlike football or basketball, the ice isn’t littered with people who don’t belong there. Unlike baseball, the trophy is phenomenally cool (iconic, even). Every June, each winning player skates around holding the Cup over his head — always screaming in disbelief, kissing the Cup once or twice, then handing it to the next deliriously happy teammate — only the moment means something different to each of them. That’s what I love the most about it: not the process as much as interpreting those particular moments. You can see everything they’re thinking.

For instance, Chara looked so freaking happy that it almost looked like he was going to tip over like a tall building. Recchi knew it was his final game, the perfect way to go out, and savored it accordingly. Lucic couldn’t believe it was happening in Vancouver, the place he grew up, and looked like he might start bawling. Bergeron pumped it in the air with extra gusto, knowing that he’s probably one more unlucky concussion from never playing again. Horton held the Cup high without a hint of bitterness, ecstatic to be there and not in a hospital bed. Marchand bathed in one last round of boos from the Canucks fans — who simply hated him, and rightfully so — holding the Cup high to stick it to them one more time. Seguin almost didn’t know what to do with it and quickly passed it off, like he was thinking, “I’m too young for this, how did this happen?”

And Thomas? He took the Cup for a little extra ride, skating in the other direction with it, doing a quick mini-lap and basking in the past two months. Tim Thomas will always be remembered in Boston for many reasons, but mainly this one: The Bruins goalie finally got hot. You could say it was 40 years coming. Because it would be true.

Bill Simmons is the Editor in Chief of Grantland and the author of the recent New York Times No. 1 best-seller The Book of Basketball, now out in paperback with new material and a revised Hall of Fame Pyramid. For every Simmons column and podcast, log on to Grantland. Follow him on Twitter and check out his new home on Facebook.

Correction: An earlier version of this piece said there was a Game 7 of the 1974 Stanley Cup Finals. That series was decided in six games. Also, there was a reference to Ray Bourque’s Stanley Cup parade in 1999. The parade occurred in 2001.