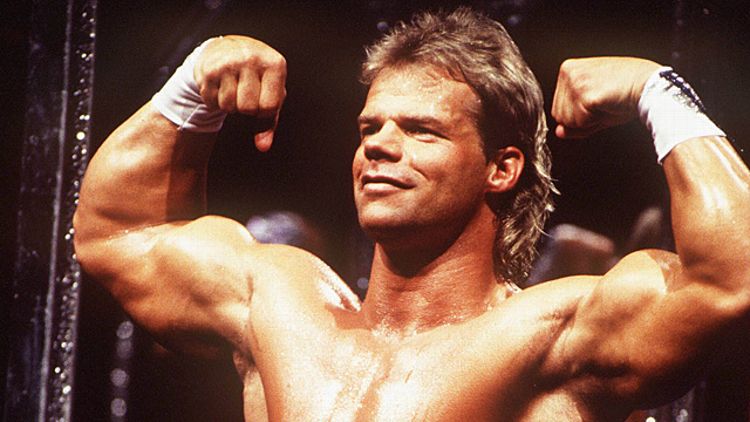 shoot (noun): anything real that happens in the scripted world of professional wrestling. It originally meant a real fight — a shoot fight — but evolved to include reality-referencing speeches and later any intervention of reality into the unreal proceedings. This is the first in a series that explores the true stories behind real fights, genuine talk, and general breakdowns in pro wrestling unreality.

Travel back with me to January 1987. Lakeland, Florida. Or was it Fort Lauderdale? Who can really remember? We’re watching Championship Wrestling in Florida, the territory that gave us stars like Dusty Rhodes, Kevin Sullivan, Wahoo McDaniel, and Jack and Jerry Brisco. On this night we get a treat — a steel-cage match between the promotion’s golden boy, the flaxen-haired and mahogany-skinned Adonis, Lex Luger, and the monstrous Santa Fe wild man Bruiser Brody. The cage looms, ominously, and the crowd senses something shocking might happen.

It happens, although it isn’t the kind of violence anybody suspected. The two men are in the ring, the cage door is locked, and the referee — a string bean, even by wrestling ref standards — calls for the bell. His name is Bill Alfonso. He would go on to a career of some significance as a manager in ECW, including a bloody brawl with a female valet named Beulah McGillicutty wherein Alfonso supposedly lost a third of his blood.

The two wrestlers go at each other and they tie up — it’s the way every wrestling match starts, or at least how they used to begin. Brody starts clubbing Luger with forearms. Luger is stunned, but he looks more confused than hurt. Maybe it’s his overmuscled posture, maybe it’s his inability to look hurt, maybe he’s just confused. Luger was trained by Hiro Matsuda, a grappler well-versed in introducing musclebound blonds to the biz — he trained both Paul Orndorff and Hulk Hogan, the latter of whose leg he deliberately broke in their first session. This match is years later, of course, but Matsuda’s role is even more significant because those guys (and guys like them) became superstars. The Muscle Beach look meant money.

A minute in, Luger gets in some licks and grabs an arm bar. Nothing’s overtly amiss, but in retrospect, it’s hard not to notice some awkward tension in the back-and-forth. Brody was a legend of the late Territorial Era. In Japan they called him the Intelligent Monster, which is about right. Like many of the era’s stars, Brody never stayed anyplace for any length of time; he roamed the country and the globe, increasing his fame and his appearance fee with each brutal brawl. Some days he was the villain, some days — more and more as time went on — he was the hero. This night in Florida, he was the bad guy, the mythical beast immune to pain. Luger had been trained to “play Superman,” to be the hero who brushed off attacks and overcame all odds. So what happens when the irrepressible force meets the impervious object? Something ugly.

Around the three-minute mark, Brody goes to toss Luger into the cage wall, but Luger reverses, awkwardly, like they didn’t have it planned out, and Brody only halfway reacts to the pain. Luger tosses him into the cage again, and Brody sells it for a second or two and then more or less pretends it never happened. He tosses Luger into the wall and Luger goes down like he’s been hit by a truck, overacting now, probably to prove a point. Brody goes back into the wall, Luger follows up with a barrage of punches, and now things get really weird: Brody stops reacting. Luger postures up as if to say “What the fuck?” More punches, more unresponsiveness. Brody isn’t so much refusing to react; he’s strangely unpresent, detached. He’s not playing the indestructible monster, and he’s just not playing along. He’s not reacting to the punches because the punches are fake, and he doesn’t have to. He’s betraying the most basic tenet of wrestling, the agreement to make the fake real — and Luger has no clue how to handle it.

Around the 6:30 mark, Luger plainly asks Alfonso what he should do. It’s been three minutes since the match unraveled, but you can bet it felt like an hour to Luger. Brody was notorious as one of the most ornery guys in the business, and (not coincidentally) one of the toughest. When he puts Luger to the mat with a single-leg takedown, it’s a legitimate move. Luger has no response; Brody holds him down for a few seconds, bullying him, exerting his superiority. Luger gets back up, exasperated. The fight returns to the cage wall, and somewhere in here Luger conspires with Alfonso. When the two wrestlers clinch and Lex keeps punching Brody, who is still refusing to act out any pain, the ref goes to break them up and Luger tosses Alfonso to the ground. The ref calls for a disqualification (even though cage matches were almost always no-disqualification in those days) and Luger doesn’t even wait for the cage door to be unchained from the outside. He vaults himself over the cage and hightails it up the aisle. Poof — he’s gone.

The story goes that Luger doesn’t even shower; he gets his gear, hops in his car, and leaves. A few weeks later he’ll be wrestling for the Jim Crockett promotion in North Carolina, sharing the ring on national television with the likes of Ric Flair. Within a few years he’ll be TV Champion, and eventually Heavyweight Champion. Brody dies 18 months later in Puerto Rico, stabbed in a locker-room shower by Jose González, lieutenant to area promoter Carlos Colon.

That night in Florida was a minor thing. It wasn’t a televised bout. There are no announcers to walk us through this mess. If some fan hadn’t filmed the show from the crowd, we probably never would have heard about it. It’d be another item in the litany of crazy Brody stories that wrestlers tell. So what the hell happened?

There are a million rumors floating around the Internet about Brody and Luger in the cage. Like most backstage wrestling lore, much of it is second- or thirdhand, much of it is spurious, and all of it is couched in someone’s personal motivations. But combing through interviews, bingeing on message boards, and talking to a source or two clears up the basics of this story. Brody didn’t feel like making Luger look good. He never liked Luger, and he didn’t want to work with him in the first place. Bruiser wasn’t the only one who felt this way. Lex always had the reputation of being aloof, of having an unwarranted sense of entitlement, of caring more about himself than the business, and many of his peers resented him for it. Luger had already signed the deal with Crockett by the time he stepped inside the ring with Brody, and everyone knew he was on his way out. It’s likely that he refused to lose that night, either on his own accord or because Crockett had told him not to. Brody didn’t like to lose either, especially to people he felt were undeserving, and Luger epitomized everything he hated. This had happened before. When Brody got peeved, he would sometimes stop selling — industryspeak for reacting to his opponent’s attacks. He chose to defend one facet of pro wrestling’s code, having to work your way up and learn the hard way, by breaking another facet, selling the illusion that the fights are real. Brody stood for an age-old system of roughneck rules and backstreet morality; Luger stood for a new era, one defined almost entirely by celebrity.

Those two eras — and the egos of the two men in the ring — collided that night in a supernova of semi-shooty stupidity. The story goes that Luger approached Brody in the locker room to plan out the fight, and Brody brushed him off. Most guys of Brody’s vintage could work a match with no planning, and he was forcing the green Luger to play by those rules. Luger responded awkwardly in the ring and the whole thing devolved from there.

Some say that a bunch of the old hands backstage put Brody up to it as a joke, or that they’d freaked Luger out by filling his head with tales of Brody’s real-life viciousness. Some say Luger wanted to call the match — to choreograph it on the fly in the ring, something the veteran almost always did — and that’s what pissed off Brody. Others say that Brody had gimmicked razor blades into his finger tape — one particularly gruesome way to stage a bloody fight — and Luger escaped as soon as he realized it. Some will tell you that Bruiser was hung over, contributing to everything (and his demeanor sort of backs that up).

Luger, for his part, has laughed it off in interviews after the fact. They were fine after the match, he says. Brody eventually said that he had no problem with Luger and that he was mad at the promoter for not paying him, or not booking him as they’d promised, and that he just wanted to make a point. Dave Meltzer, the ageless wrestling reporter who was friends with Brody, basically backs the conventional wisdom — Luger refused to lose, Brody was pissed — but adds that the booker gleefully used the match as a warning to youngsters on the roster not to mess with tradition. (Brody’s friendship with Meltzer was the source of a lot of his fearsomeness in those days. He was a scary physical specimen, to be sure, but wrestlers knew that if somebody crossed him, it would show up in Meltzer’s popular newsletter, and that Meltzer would likely side with Brody. Of the night in question, he wrote that Bruiser’s plan was to let Luger punch himself out, because “that guy is so filled with steroids he’s gassing out in two minutes.”)

Whether or not it played a direct role in what happened, wrestling’s changing of the guard remains the hinge that this legend turns on. Luger represented a new world in which performers like Brody wouldn’t be able to pull stuff like this anymore, regardless of tradition and ethos. The new world of wrestling would be about Vince McMahons and Hulk Hogans, not about the legitimate brawlers who once carried the industry. In terms of look and charisma, Brody should have been a player in the WWF or the NWA, but he wasn’t. Maybe he was too undependable, or maybe stunts like this tarnished his reputation too much. Regardless, his time was coming to an end.

In an interview much later, Alfonso said this match was the one story people always wanted to hear — and coming from a guy with ECW pedigree, that’s saying something. When things break down in wrestling — when reality intervenes — fans remember it, no matter how awful the match is.

Next in the series: Doug Gilbert shoots on Jerry Lawler and buries wrestling in Memphis.