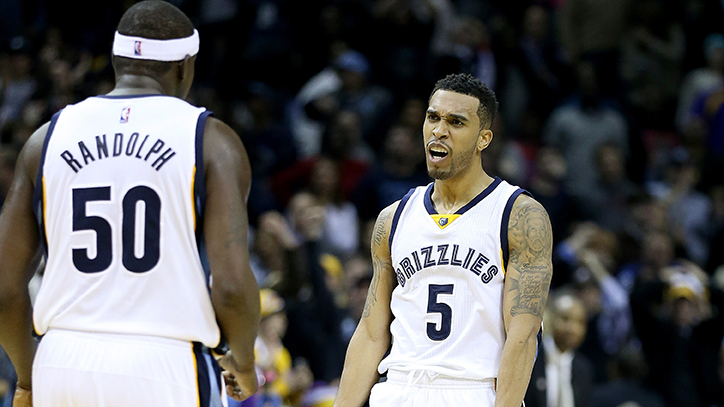 The Memphis Grizzlies have won nine of their last 10 games, and they show all the early signs of a legitimate title contender. The only game they have lost in the last three weeks was in Toronto, when a terrible stomach virus kept Tony Allen and Courtney Lee off the court. Everyone knows that Allen, the cofounder of Grit and Grind, is a huge part of the Grizzlies’ success, but fewer recognize the growing importance of Lee. Since landing in Memphis 11 months ago, he has quickly become an indispensable cog for one of the best teams in the NBA.

On the surface, Lee may just seem like a “nice piece,” but he is a much better NBA player than you probably think.

Lee and that reliable jumper have helped diversify and improve Memphis’s offensive attack. I talked to Lee about his early-season success, and how the team’s offense is slowly shedding its poor shooting reputation. “We have perimeter threats now. I think that reputation is changing,” Lee said. “We have Mike Conley at the 1 who can shoot the 3. We have myself, Vince, and Q-Pon who are all capable of knocking down 3-pointers.”

Since the Grit and Grind era unofficially began in the 2010-11 season, the team has made the playoffs four straight times, but never finished above 15th in offensive efficiency. It ranks eighth this year, and that’s a big reason why Memphis has the best record in the NBA. The defense is still great, but now the offense is reaching unprecedented heights.

When Memphis acquired Lee from Boston in January, the Grizzlies were good, but not great. According to Memphis GM Chris Wallace, their biggest flaw was obvious. “Our Achilles’ heel over the last four years has been outside shooting, and the overall diversity of the offense,” he said.

In a league increasingly driven by perimeter scoring, Memphis’s inability to produce from outside the paint not only slowed its efficiency, it indirectly reduced its ability to score inside. The Grizzlies were unable to space the floor, and too many of their perimeter players were empty threats. Everyone around the league knew it, and according to Wallace, it affected Zach Randolph and Marc Gasol: “If you’re playing 5-on-4, it’s tough. When defenses are sagging to an exaggerated extent on your big people … first of all, it’s hard just to get the ball in there, [and] secondly for them to have adequate room to operate.” 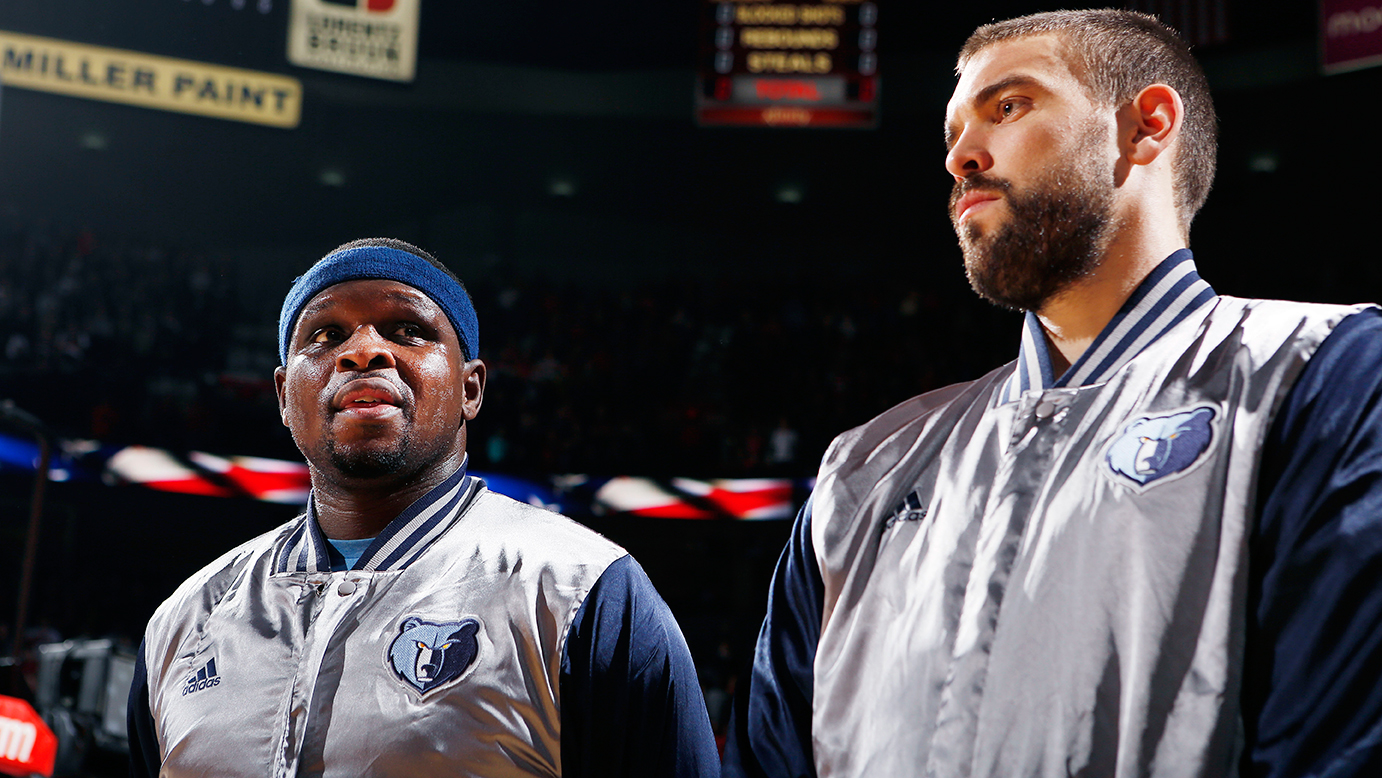 Make no mistake, Gasol and Randolph are the most important players in Memphis. But for as good as they are, they need help stretching the defense. That wasn’t happening with lineups that included Allen and Tayshaun Prince on the wings. Those guys do a lot of things, but stretching the defense is not one of them. This year, Lee is keeping those perimeter defenders more honest. Lee has a front-row seat to how his play helps Randolph and Gasol. “It frees them up. We have two traditional post guys, and usually when they get in the post, people double them,” he said, adding, “But now, our shooters keep their men attached to our bodies, so it opens up the floor for our big guys — our opponents are respecting the 3-point line more.”

Not only are opponents respecting the perimeter more, but Lee said the Grizzlies offense is suddenly a five-headed egalitarian monster:

“The thing with our offense is that it’s equal opportunity. I think every play, all five guys are involved. The ball might go down low, but then there’s a hammer action or a flare action, so we’re all involved. For the most part, I try to get good looks in transition, and then in the offense, moving without the ball trying to find open shots.”

Over the past few seasons, Memphis has ranked last in the league in 3-point production, in part because it decorated the perimeter with guys who couldn’t shoot. This year, while the Grizzlies still rank near the bottom of 3-point production, their efficiency has improved, especially among the starting backcourt. Beyond the arc, Conley is shooting 43 percent and Lee is shooting 53 percent.

In the play below, you can see Memphis catch Portland’s Steve Blake trying to double-team Randolph in the post; watch as Lee slides into open space and Randolph finds him for the open 3. These are the exact kinds of plays that will keep opponents more honest on defense, freeing up Randolph and Gasol in the process.

Lee and Conley may not be the Splash Brothers, but on a team with Gasol and Randolph, they don’t need to be — they just need to provide a credible threat. Wallace said Lee’s ability to do just that is as important as his made baskets. “Obviously, the actual points he puts on the board are very important. But the attention that opposing defenses have to put on him is also important for us.”

Against the Clippers, you can see the magnetic powers of Gasol and Randolph. As they work it down low, the entire Clippers defense collapses around the paint. Gasol notices, and after a kickout and swing to Lee, Memphis makes L.A. pay.

In previous years, this kind of defensive cheating was effective against the Grizz. Lee says the offense’s newfound ability to put opponents in a “pick your poison” predicament is a key to this year’s attack. “We got about five plays where we put the defense in a situation where they have to pick between one of two players, and when they pick one player, then you automatically know the other player is getting the shot.”

Memphis’s starting lineup now features Randolph, Gasol, Conley, Allen, and Lee. Despite being arguably the team’s most effective unit last season, it was only sparingly employed in 2013-14 — combining to play 67 minutes together the entire campaign. This year, that same group has not only become the team’s most common quintet, it is also torching its way through the league, outscoring opponents by an average of 11 points per 100 possessions. The team’s second-most common lineup includes four starters, with Prince sliding in to replace Lee. This group has been much less effective, with opponents actually outscoring it by two points per 100 possessions.

Replacing Lee with Prince may seem minor on the surface, but it greatly reduces the team’s spacing. It’s a throwback to the pre-Lee days, with Allen and Prince on the wings. These guys don’t exactly strike fear into opponents’ perimeter defenders.

Lee may not be the league’s most dynamic scorer, but Wallace claims he’s just the right kind of jump-shooter.“I don’t think there’s a better pull-up jump-shooter in the league,” he said. “The highest praise I can give a shooter is that every time he shoots, I think it’s going in. And that’s the way it is when I watch Courtney shoot the ball. And this year he’s been extremely effective as a 3-point shooter. The combination of his two areas of expertise really opened our offense up.” 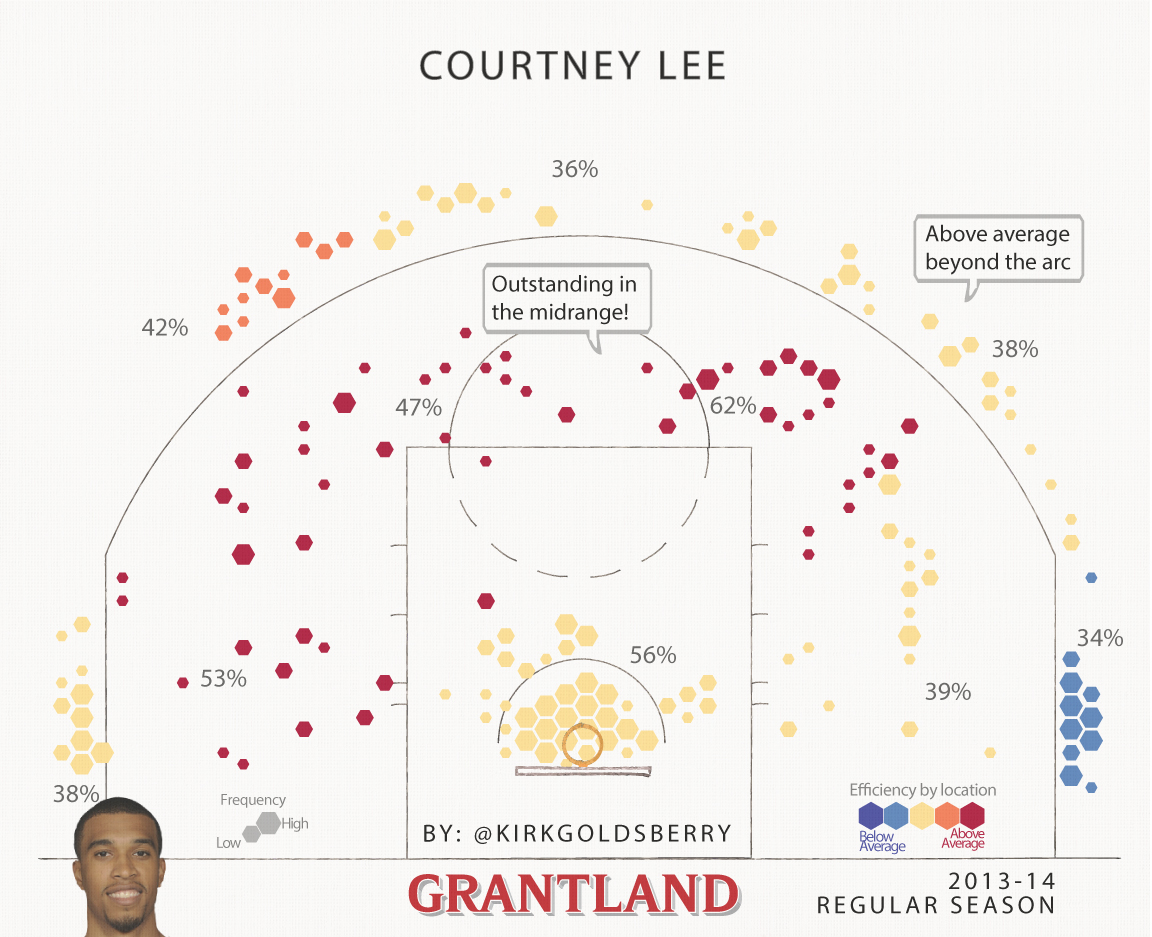 When the Grizzlies traded for Lee, not many people raised an eyebrow. In retrospect, that minor move is looking pretty major. Lee has found a home, and it looks like Memphis has found effective offense in the bargain. It just goes to show that NBA chemistry is a fickle science. We fawn over superstars, but many of the league’s games are won and lost by so-called role players. If he keeps playing like this, and Memphis can keep its key players healthy, Lee might help bring an unlikely title to the Grindhouse.