The Sad Boys: Looking Back at Brandon Jennings and Josh Smith’s Brick-Laden Season in Detroit 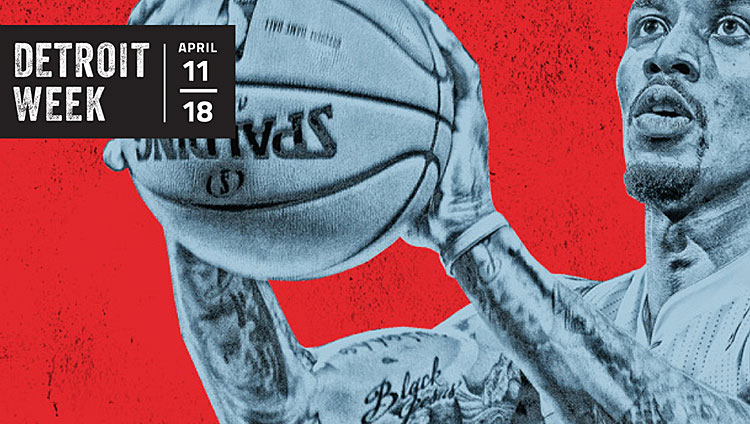 I love the Pistons. As a huge basketball nerd who spent the latter part of my twenties in Michigan, they are one of my favorite teams. However, it saddens me to see what’s become of the old Motor City juggernaut, and that my main contribution to Detroit Week will be depressing shot charts and analysis of horrendous shooting. But alas, here we are looking back at another lost basketball season in Motown.

In July 2013, Joe Dumars once again tried to import the right pieces into the Palace. And once again, it turned into a disaster. The team acquired Josh Smith and Brandon Jennings, hoping that a change of scenery would reinvigorate both guys, along with the franchise. It didn’t work out, and to paraphrase Nietzsche, hope in reality is the worst of all evils because it prolongs the torments of people forced to root for Josh Smith and Brandon Jennings.

Back when Smith was a free agent, I was hopeful that in a different place, under a different coaching staff, and in a different basketball culture, he could shed his reputation as one of the most maddening offensive players in the NBA. If he could only focus on his close-range game and leave behind his foolish jump-shooting habit, he could really shine. Unfortunately, that didn’t happen. Maybe it’s because Smith was added to a roster crowded with young bigs that clog up the interior; maybe it’s because he’s the most stubborn man in the NBA; maybe it’s a combination of these things, but regardless, everything that has always frustrated NBA fans about Smith was on full display in Auburn Hills again this year.

And if that weren’t bad enough, by pairing Smith with Jennings the Pistons immediately became one of the most frustrating teams in the league.

The stats are ugly.

Forty-six NBA players attempted at least 600 shots outside of 8 feet this season; Smith ranks 46th in that group in shooting efficiency. By making only 202 of his 675 outside shots, Smith is the only player in that group hitting less than 30 percent of those shots. Oh, and Jennings ranked 44th.

The charts are even uglier 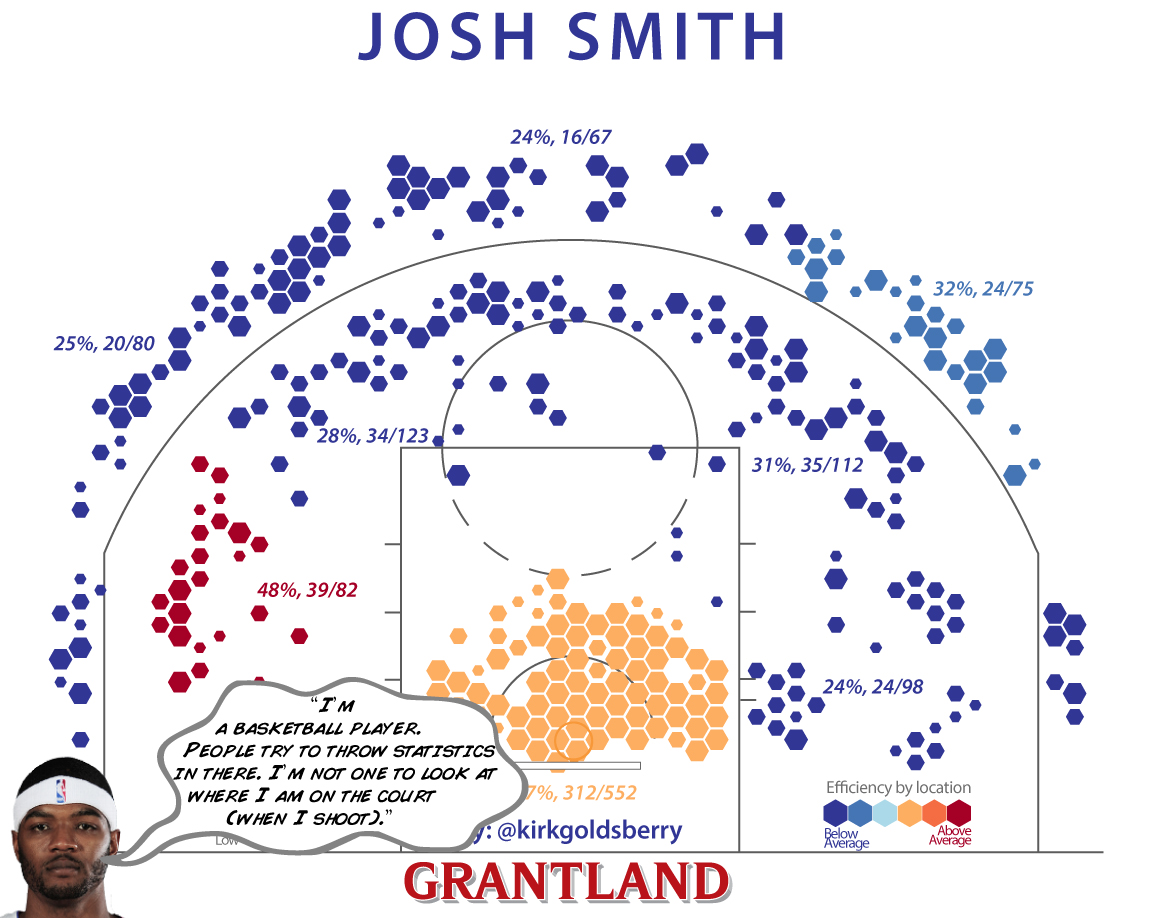 Smith’s chart is déjà vu all over again. He’s still a gifted player near the basket, and he’s still a terrible jump shooter. But he’s not the type of guy who’s gonna let a few silly facts change his shot selection. In fact, he explained this idea to USA Today earlier this season:

“I’m a basketball player. People try to throw statistics in there. I’m not one to look at where I am on the court (when I shoot). I’m confident in each and every play I make. I don’t think about it. I just play and play with confidence.”

Confidence is great; so is self-awareness. Smith has taken more outside shots than Goran Dragic, Jose Calderon, and Chris Bosh, while making them at the lowest rate in the NBA. It’s that unique blend of clueless volume and unprecedented ineffectiveness that makes him special.

Jennings is also one of the least-efficient scorers in the NBA. Out of 67 players who attempted at least 600 2-pointers, Jennings ranked last in efficiency. 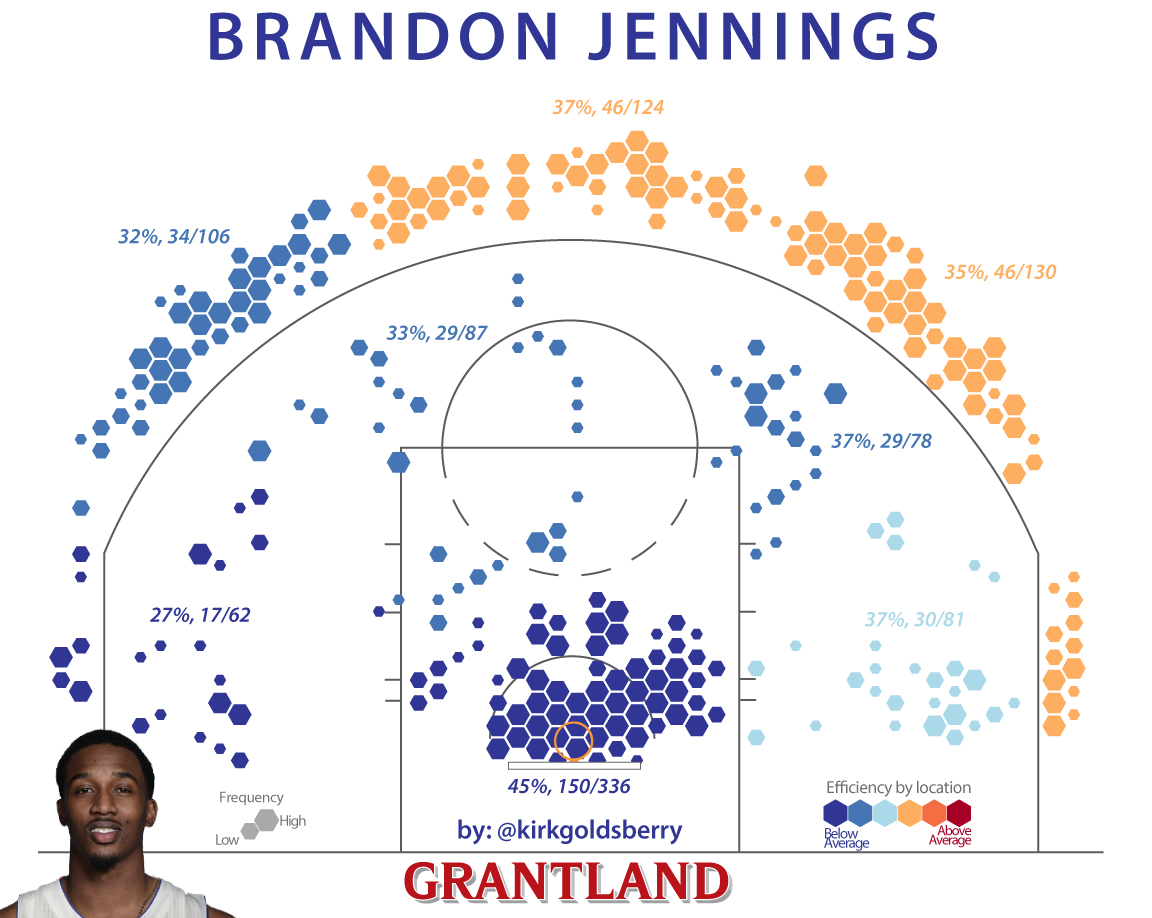 While Jennings has been average beyond the arc, his stark ineffectiveness inside of it is the glaring takeaway from his first year in Detroit. His pull-up game is struggling, and his ability to finish at the hoop leaves a lot to be desired. He’s obviously talented and young enough to get better, but given the vast instability within the Pistons organization, it’s hard to expect any drastic improvements in the immediate future. 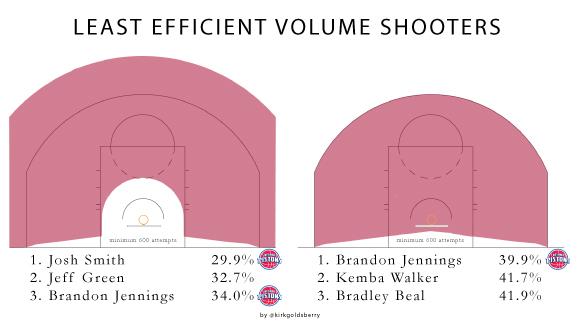 On a team loaded with young bucks primed to dominate the interior, the Pistons would be wise to decorate their perimeter with decent jump-shooters and strong pick-and-roll playmakers. Instead, they went out and signed two below-average volume shooters who don’t really make the players around them better, which is particularly tough because those young bigs are in the most important developmental stage of their careers.

As crazy as this sounds, there may still be room for optimism in Detroit. The roster is loaded with untapped potential, and the challenge facing the next crop of Pistons execs and coaches involves building schemes and player development systems capable of realizing that talent. Maybe I’m crazy, or biased, but I still feel that in the right system, Smith and Jennings can burgeon into good NBA players. If the next regime can make small improvements, Detroit could be a playoff team as soon as next year. If it doesn’t, well, get ready for more Josh Smith jumpers in Auburn Hills.