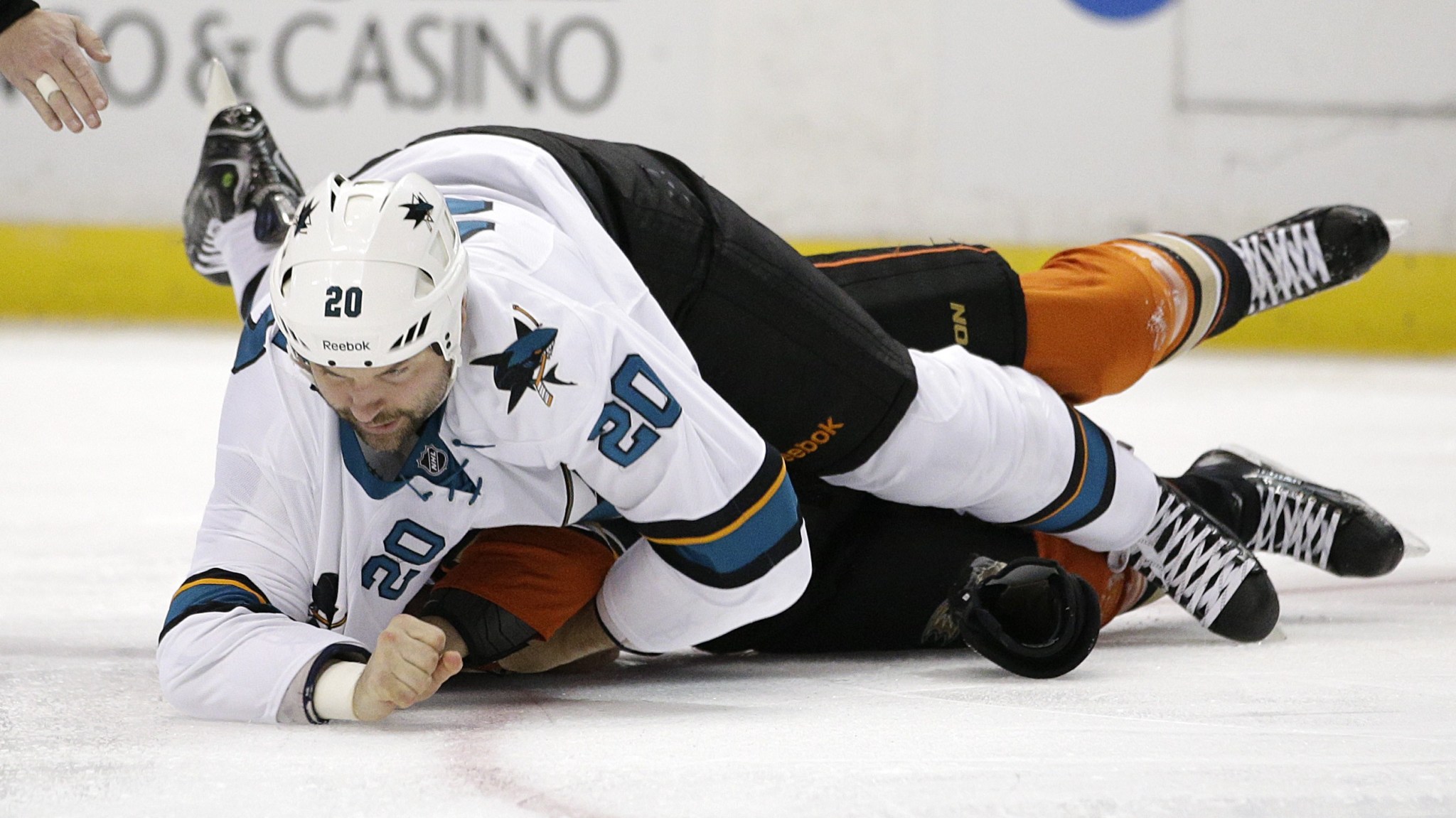 Well, we knew it couldn’t last. The NHL’s department of player safety has finally had to get back to business.

It can thank San Jose enforcer John Scott, who left the bench to start a fight in Sunday’s game between the Ducks and Sharks, earning himself a two-game suspension. It was the first ban for an on-ice infraction all year, including the preseason, ending an almost unheard-of period of peace and quiet for our friends in the department of player safety.

In recognition of the recent stretch of leaguewide good behavior, let’s take a look back at some other incidents from NHL history that also didn’t earn a suspension. Of course, circumstances were a little different back then. For all the criticism the department of player safety comes under these days for just about any suspension it hands out (and especially the ones it doesn’t), it’s fair to say that today’s players don’t get away with anywhere near as much as they used to.

As evidence, consider the five hits below. None were deemed worthy of a suspension at the time. Today, that probably wouldn’t be the case. So let’s take a look back at some of the dirtiest clean hits of all time.

The hit: We might as well get the obvious one out of the way first.

This was the hit that literally changed the sport, or at least its rulebook. Matt Cooke’s blindside hit of Marc Savard was vicious, dangerous, and unnecessary, a blatant attempt to injure a defenseless opponent. It was also, strictly speaking, legal. It wasn’t an elbow or a charge, it wasn’t especially late, and Cooke didn’t leave his feet. As much as the hit turned everyone’s stomach, there was nothing in the rulebook that said it was dirty.1

The verdict then: No suspension, since the play didn’t technically break any rules and similar hits had always been deemed clean. But in an era in which we were beginning to understand the seriousness of concussions, it sure seemed like Cooke’s hit should have been suspendable, and even Don Cherry wanted him gone. It led to the introduction of Rule 48 the following offseason, which made it illegal to hit a player in the head from the blind side.

The verdict now: If Cooke did it? He’d be out of the league. That’s not an exaggeration; after Cooke was busted for targeting the head yet again a year later, the league made it clear he had to change his game or find a new job. To his credit, for the most part he has.2 But if he ever throws another hit like this one, they’ll have the nameplate off his locker before the whistle finishes blowing.

If it were someone other than Cooke, we’d see a lengthy suspension that would depend partly on the resulting injury and the offending player’s history. Rule 48 is still poorly understood by many fans, and it’s led to plenty of debate over just how severe the resulting bans should be, but to its credit, the league has done a good job of making it clear that blindside hits to the head are no longer tolerated.

Which is a good thing, because those hits used to happen all the time, and sometimes they were really ugly, as we’ll see in our next clip.

The hit: Early in the third period of a 1994 regular-season game between the Stars and Rangers, Mike Modano cuts across the blue line and momentarily looks down for a pass in his skates. New York’s Mark Messier catches him with his head down.

Ignore the stuff with the stretcher that happens at the end of the video. The hit itself is a classic blindside, as Modano is in a defenseless position and Messier delivers a …

[Realizes everyone is just skipping ahead to the stretcher part anyway.]

Sigh. Yes, this is the infamous clip in which the medical staff drops Modano’s stretcher. Go ahead and watch that part 30 or 40 times if you must, but we’re not going to make fun of it here because we’re a little more mature than that, thank you very much. (And, uh, we already covered it frame by frame a few months ago.)

So Modano is in a defenseless position and Messier delivers a shoulder to the head that appears to knock him out cold. To make matters worse, Modano’s helmet comes off and he hits the back of his head on the ice, opening up a bad gash. He suffered a concussion and missed several games.

The verdict then: No penalty, no fine, no suspension. Also, Modano’s own GM defended the play, saying, “I don’t know if it was so much a hit as Mike turned and skated right into him.” That’s a real quote. The whole incident was probably the most mind-boggling thing Messier was ever involved in, right up until that commercial that came out a few weeks ago in which he’s standing in a room full of Canucks fans and none of them are throwing garbage at him.

The verdict now: In 1994, this was considered a clean hit. Today, it would be a classic Rule 48, and the resulting injury would make a hefty suspension all but inevitable. As a star player, Messier would get some benefit of the doubt. But he also had a history of questionable plays on his record, including a 10-game suspension for sucker punching Jamie Macoun in 1985. He’d get at least that much for this hit, and probably more.

(By the way, this wasn’t even the most ridiculous non-suspension hit against a Dallas Stars player in 1994. More on that in a minute.)

The hit: Scott Stevens is pretty much the poster child for the change in how hockey fans think about bodychecking. In his day, he was celebrated as the hardest hitter in the game, with a reputation for catching opponents with devastating (but clean) head shots that would leave guys crawling back to the bench.

Today, of course, the concept of a clean head shot doesn’t really exist, at least in the context that Stevens usually delivered them. Rule 48 makes the hitter responsible for not making his opponent’s head the principal point of contact, as long as the opponent doesn’t lower his head or change position at the last second; Stevens was the master of targeting the head with otherwise squeaky-clean hits.

His list of victims included Ron Francis, Slava Kozlov, and, most memorably, Eric Lindros. But his most questionable hit under today’s standards was this one, from Game 6 of the 2003 Stanley Cup final.

The hit is probably on the late side — Paul Kariya takes two full strides without the puck — but that’s a notoriously ill-defined section of the rulebook. Either way, the head of a defenseless player is clearly the principal point of contact, and the hit knocks Kariya out cold — he even appears to stop breathing at one point.

Amazingly, Kariya was allowed to return just a few minutes later, scoring the memorable “off the floor, on the board” goal to clinch an Anaheim win and extend the series. He didn’t remember scoring the goal, and the play contributed to the concussion problems that eventually ended his career.

The verdict then: Clean hit. Maybe a little late, but you’ve got to keep your head up when Stevens is out there.

The verdict now: Hoo boy. On the one hand, a late head shot like this one would clearly fall into the category of suspendable offenses. And there’s a precedent for suspending a guy for a late hit in the Stanley Cup final, thanks to Aaron Rome’s four-game ban for this check in 2011.

But Stevens was a superstar, and the Kariya hit came in Game 6. Would the league really have the stones to suspend a guy like Stevens for Game 7 of the final? It might have no choice, but I’d hate to have to make that call.

The hit: You know what, I’m honestly not sure that I’m a good enough writer to describe this one with words. Let’s just go right to the clip.

The verdict then: No suspension, and no penalty either judging by the referee skating by with his arm down.

The verdict now: It’s hard to say, since I’m not sure there’s a precedent for anything this ridiculous. Sure, there’s a vague resemblance to the Zdeno Chara–Max Pacioretty hit, which didn’t result in any supplementary discipline. But as bad as that one looked, Chara didn’t grab Pacioretty’s head and skate him into the turnbuckle, so I don’t think it really helps us much.

You’d have to think that 15 or 20 games is the starting point here, and maybe more if the injury turned out to be significant. Of course, years later, Hunter would earn what was at the time the longest suspension in league history, 21 games for blindsiding Pierre Turgeon after a goal.

The hit: By 1994, Pavel Bure had established himself as one of the most dangerous offensive threats in the league. So it was no surprise when opponents starting targeting him for as much physical punishment as the rules would allow, and then a little bit more on top of that. That was especially true in the playoffs, when Bure had to fight through a steady stream of abuse.

Things got especially bad during the 1994 postseason, and by the second round against the Dallas Stars, Bure had had enough. When Stars tough guy Shane Churla took a run at him in Game 2, Bure had three options: let the abuse go and play through it, let a teammate like Gino Odjick dish out some payback, or take justice into his own hands.

Let’s just say that he went with option no. 3.

“The Mother of All Elbows” indeed. Churla was knocked out cold on the play.

I mean, that’s somehow worse than getting nothing at all, right? At least if a guy gets nothing, you can talk yourself into the play being legal due to some sort of technicality, or the victim’s team forgetting to send in the tape, or the guy who’s supposed to review the plays being sick that day … anything. But in Bure’s case, the league looked at the play, agreed that it was a dirty hit, and then fined him roughly 0.0006 percent of his career earnings.

Churla, needless to say, was livid. He refused to shake Bure’s hand after the series, and he (correctly) pointed out that if the roles were reversed, he’d have received a double-digit suspension.

The Canucks went on to win the game and the series, and eventually came within a game of winning the Stanley Cup. While Bure was widely criticized for the dirty hit, he also earned some kudos for standing up for himself. Canucks director of hockey operations George McPhee even told reporters that “from a management perspective and hockey perspective, you like to see that in a kid.”

The verdict now: Let’s see … it’s a blindside headshot. It’s an elbow. He leaves his feet. It’s clearly retaliatory. It resulted in a significant injury. And, oh yeah, Churla is nowhere near the puck.

Even given that Bure was a superstar with no history and the league tends to be more lenient in the playoffs, it’s hard to imagine him playing another game that year. In fact, you could make an awfully good case for this being the dirtiest hit of all time.

Oh No, Romo: The One Guy Dallas Can’t Afford to Lose