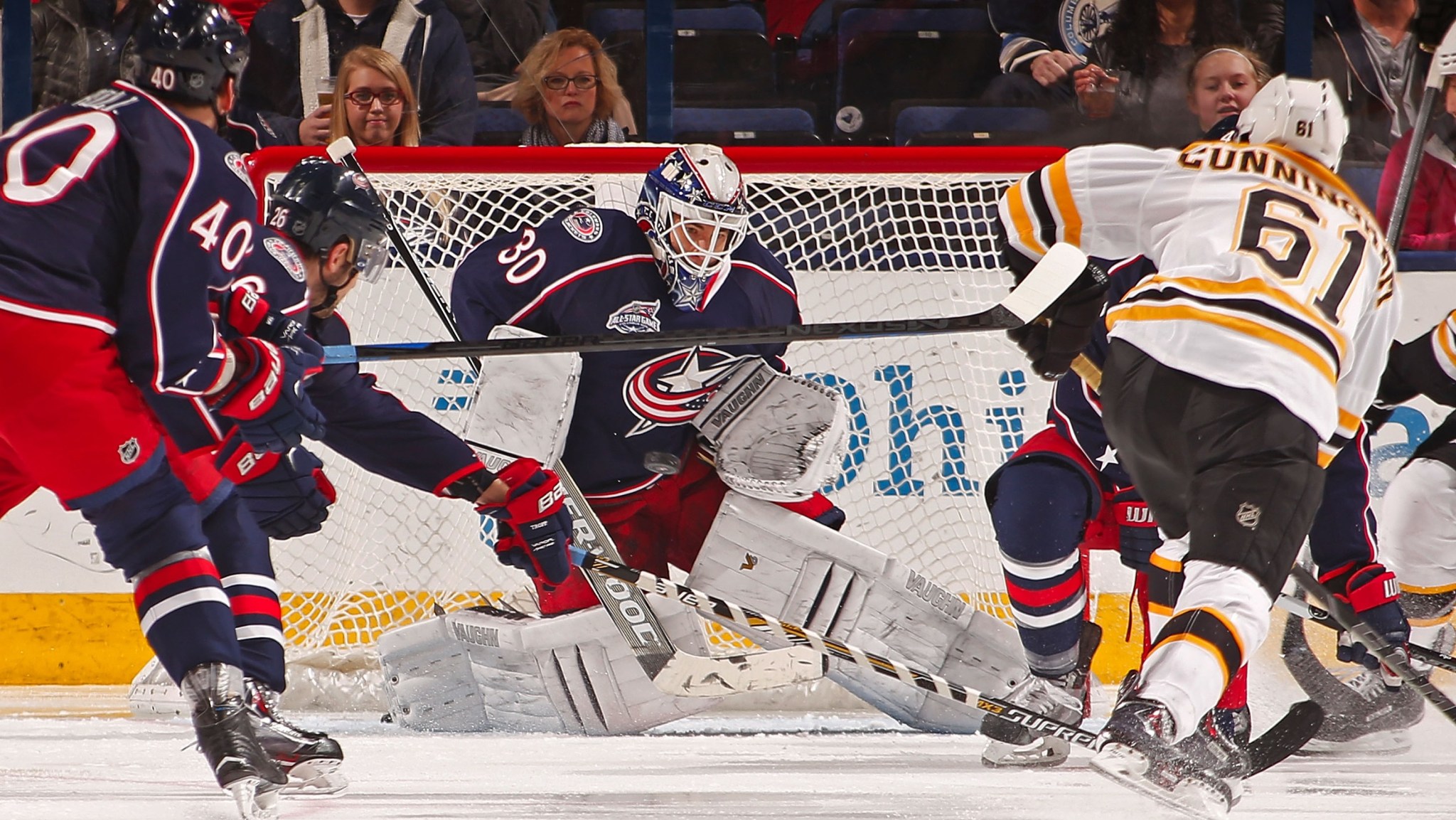 The third star: This Islanders fan

Well, at least he’s owning it.

I feel very conflicted about this. On the one hand, I like seeing Kaleta get punched in the head. On the other hand, I don’t like rooting for him to win fights.

This Week’s One Star of Your Nightmares

Recognizing NHL personalities from around the league who are coming to get you while you sleep.

The only star: This kid

Somebody remind me, which version of Silent Hill has the final boss fight that takes place at the TD Garden?

If your kid dresses like this to a hockey game, you gotta be a little worried you’re raising a serial killer, right? pic.twitter.com/zid0tCtoiF

The issue: The NHL allowed a goal to stand in a Bruins–Blue Jackets game even though the puck had hit the netting and the play should have been blown dead.

The outrage: The league changed the rules this year to make the netting reviewable, so how can a goal like this still stand?

Is it justified? The rules are pretty clear: If the puck touches the netting above the glass, the play is supposed to be dead. So when the officials missed that happening and allowed a Columbus goal to count, it was understandable that die-hard Bruins fans would be upset.

But netting calls can get missed, just like any other type of call. It would be nice if they never did, but that’s not realistic. As Puck Daddy broke down, missed netting calls have already happened several times this year. The league did indeed make the calls reviewable this year (after one decided a game last season), but that’s only in cases when the puck hitting the netting leads directly to a goal, and “directly” isn’t especially well defined.

That’s led to plenty of complaints over the league’s new approach. Some think that review should be expanded to include any instance of the puck hitting the netting at any time. Others want a more in-depth definition of which plays the rules apply to. And others suggest that they should just get rid of the review altogether.

But here’s the thing: The league shouldn’t change anything, because it has already gotten the rule exactly right. Expanded video review should only ever apply to plays that lead directly to a goal. In the case of the Blue Jackets–Bruins game, that clearly wasn’t the case — the missed call happened at the other end, and more than a minute passed before the goal.

If we’re ever going to have expanded video review, up to and including a coach’s challenge, we’re all going to have to get our heads around this. Hockey is a free-flowing sport in which literally hundreds of things can happen leading up to a goal, and opening up every one of them to review is the path to madness. If a call gets missed and doesn’t lead directly to a goal, it’s done. And we don’t need to define “directly” down to the letter, because we all know it when we see it. The league has the rule just the way it should be. It worked last weekend, and it will work in the future.

(Also, we’re two days into 2015 and I’ve already used up my one and only annual “the league got it right” take. Could be a long year.)

The Winter Classic was played on Thursday, so this week’s obscure player of the week is journeyman center Yanic Perreault. We’ll get to why in a second.

Perreault was the Leafs first pick in the 1991 draft, although it didn’t come until the third round because the Leafs had torpedoed their draft in the whole Tom Kurvers fiasco. But they found a bit of a gem in Perreault, who eventually developed into a reasonably good NHLer. He played 859 games for six teams, most notable in Los Angeles and Montreal as well as three separate stints in Toronto.

Late in his career, Perreault bounced around the post-lockout NHL and developed a reputation as arguably the best faceoff man in the league. (He also became the cautionary example for faceoff specialists, since the knock against him was always that once he won you the draw, you were stuck with him actually being on the ice.) He appeared in the 2007 All-Star Game as a Coyote, and finished his career in 2008 with the Blackhawks.

As for the Winter Class tie-in, Perreault holds a special place in NHL outdoor game history. In 2003, he was a member of the Canadiens team that faced the Oilers in the Heritage Classic. He scored a pair of goals in a 4-3 Montreal win, going down in history as the first star of the league’s first ever regular-season outdoor game.

We haven’t done a Don Cherry update in a while, so I thought we should check in just in case you were getting worried about him. He’s still kicking along, complaining about his time while using 90 percent of it to show clips of players walking into the arena. This week he wore a silly hat and met Pat Sajak. You know, the usual.

It was an interesting year for Cherry. Here’s a good wrap-up of his 10 best moments of 2014, including his battles with his new bosses and his place in an evolving television landscape. To his credit, he barely missed a beat. Overall, that’s not a bad year.

After all, remember: He’s under a lot of pressure:

In case you missed it, I found a crazy Don Cherry quote in an academic text I was reading last night. pic.twitter.com/kEQ6wcNxXs

In addition to being a great source of adorable pets and functionally illiterate commenters, YouTube is a goldmine for old hockey clips. In this section we find one and break it down in way too much detail.

The NHL’s annual holiday trade freeze ended this week, resulting in a flurry of activity leaguewide that saw one minor trade. As we’ve covered before, trading is basically a dead art in the NHL. But it wasn’t always that way. Exactly 23 years ago today, the league saw an unprecedented blockbuster. This is what it looked like when the news broke:

• It’s January 2, 1992, and the Flames and Leafs have just pulled off the biggest trade in NHL history. Literally — with 10 names in all, this trade set a record for players involved that still stands.

• I feel a need to pause here so that any fans who’ve been watching the NHL for only a decade or so can get caught up. A trade is when two teams exchange players and other assets in an attempt to improve. It’s a thing that NHL GMs used to be expected to do fairly often, back before they realized that they could just make a pouty face and say, “My job is hard,” and we would all be OK with that.

• As we can see the graphics guy isn’t feeling especially subtle today. It’s still a little too close to New Year’s to work in any sort of clever pun-based headline. Nope, he’s going with “RECORD TRADE!” Works for me, graphics guy.

• We might as well get this out of the way: This one didn’t work out for the Flames, in the sense that Doug Gilmour immediately turned into an MVP candidate and all the players Calgary got were terrible.

• Still, Rauter is going to do his best to polish this turd for his Calgary viewers. “They get a talented young defenseman, Alexander Godynyuk … ” he begins, apparently describing two different people.

• The Leafs’ side of the package isn’t all that much better, apart from Gilmour. My favorite description is that Jamie Macoun is “comfortable” on the blue line. That’s good, since, you know, that’s his position and everything. I wonder if that’s an official scouting term. Hey, is that guy any good? Uh, he’s comfortable. Yeah, but is he any— HE’S COMFORTABLE, OK?

• Rauter mentions that Gilmour had forced the deal by walking out on the Flames, then is immediately handed a memo that everyone in the Toronto media has agreed to never mention this ever again.

• We now move on to a report on the reaction to the deal. Our graphics guy goes with “REACTION.” No exclamation point this time. He’s fading.

• I’m going to go out on a limb and say that Gary Leeman may have had his nose broken once or twice in his career. Call it a hunch.

• For tonight’s performance, the role of “Craig Berube” will be played by former WCW tag team champion Paul Roma.

• Fun fact about Michel Petit: Every Canadian hockey fan called him “Mike Small,” and we all thought we were the first one to come up with it.

• “I’m pretty excited about going to Calgary,” says Jeff Reese, while clearly not lying and also making this face: 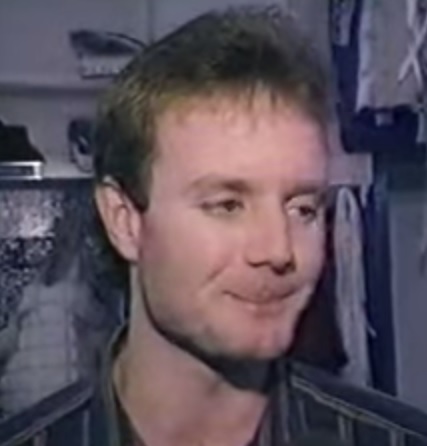 • This is the second time we’ve seen this highlight clip of Kent Manderville. I’m starting to think that it’s the only one in existence when this aired. Years later, after his NHL career wrapped up, that total had increased to … one.

• Over in Calgary, a young Joe Nieuwendyk gives his thoughts on the deal before heading over to help the San Jose Sharks film their ugly-Christmas-sweater video.

• And here’s Doug Risebrough, the Flames’ young GM. He was roasted for this deal, and it took him years to shake the reputation of getting taken to the cleaners by Toronto’s Cliff Fletcher. It eventually cost him his job in Calgary, but he did get another shot as a GM with Minnesota, a job he held for a decade. He was fired in 2009 and replaced by … Cliff Fletcher’s kid. At this point, I’m amazed Risebrough doesn’t wander the earth, like Inigo Montoya, seeking revenge against the Fletcher clan.

• The rest of this clip is pretty much more of the same. Feel free to skip ahead to the end, when the clip is suddenly interrupted by footage from the movie Edward Scissorhands, and … wait, I’m being told that’s Gilmour, apparently unaware that a small animal has crawled up his neck and died.

Needless to say, I spent the next three years desperately wanting this exact haircut.

We Went There: Hanging With a Billionaire for Washington’s (Wild) Winter Classic