Joel Embiid Is Hurt, and the Draft Is Descending Into Chaos 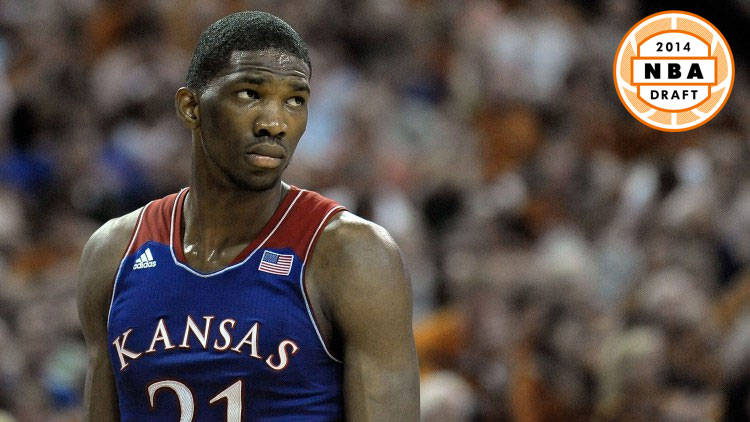 We’ve spent the whole year arguing about Andrew Wiggins, Jabari Parker, Dante Exum, and Joel Embiid, but for the past month or so, Embiid separated himself from everyone else. It wasn’t close. Scouts raved about his footwork, his athleticism, his ceiling, everything. If you can look past the injury concerns from the past year at Kansas, there’s no question who the best prospect in the draft is. But now Embiid’s hurt again.

Jeff Goodman broke the news this morning, and Embiid’s agent, Arn Tellem, confirmed the report in a statement: “Joel Embiid suffered a stress fracture to the navicular bone in his right foot. He is scheduled to have surgery tomorrow. Joel will be unable to participate in any additional workouts, and will not attend the draft in New York. We will have no further comment until after the surgery.’

So there you go. What does it mean? Couple of scenarios here.

SCENARIO 1: This means nothing. The Cavs still take Embiid anyway. He’s the best fit for the Cavs roster, he’s got the highest ceiling, and maybe all the skepticism is just a smoke screen.

Also hearing Cavs were scared off by Embiid's foot, now focusing on Jabari or Wiggins (Jabari is the favorite). Unbelievable turn of events.

And why would the Cavs need to put out a smoke screen with any of this? They have the no. 1 pick. They can just take whoever they want. I’ve loved Embiid since November, but you couldn’t come up with a scarier big-man injury combination than foot problems and back problems.

It also doesn’t help that this injury was discovered by Cavs doctors.

That all but guarantees he’s not going to Cleveland. Right? It’s one thing to find out he’s hurt, it’s another to have your own doctors discover an undisclosed injury in the physical.

SCENARIO 3: The Cavs trade the pick. If LeBron’s a real goal for the Cavs, why not? They should be calling Flip Saunders every day about Kevin Love. Doesn’t that make a lot more sense than taking Parker or Wiggins to play the same position as LeBron? Or they can flip this pick to the Sixers and try to grab additional picks later in the draft (or a few years of Thad Young). This all depends on how much Cleveland actually likes the other options, but of all the teams at the top, trading has always made more sense for Cleveland than anyone else.

SCENARIO 4: The Cavs take Parker. This is actually a continuation of the second scenario, but yeah. If the Cavs take Parker, the Bucks lose the guy they’ve wanted all along, and probably pass on Embiid to take Wiggins. That leaves the Sixers choosing between Exum or Embiid and his possible foot fracture. In this scenario, all bets are off. You could have teams trading up for Embiid, him sliding to the Celtics or Lakers, or the Sixers putting the future of the franchise in the hands of Nerlens Noel and Embiid.

We’ll see. This injury seems like terrible news for Embiid, but if he slides in the draft, that’s not necessarily as bad as it sounds. He could end up in a better situation, with less pressure, and without the horrible Cleveland karma hanging over his head. I think I’m dead serious about that last part. Even the Cavs fans I talked to the past month have been freaked out about the injury potential if Embiid went to Cleveland. It’s the Murphy’s law of sports: If something CAN break everyone’s hearts in Cleveland, it WILL break everyone’s hearts in Cleveland. If you subscribe to that theory, maybe this is great news for both the Cavs and Embiid. Maybe both sides are better off this way.

For everyone else? “We’ll know more Friday,” Tellem said.

Embrace it. We knew exactly how the top of this draft was playing out, and now we have no idea. One week to go now. Let’s do this!

It's Going to Be Fine: An Honest (Really) Defense of Claimed National Titles