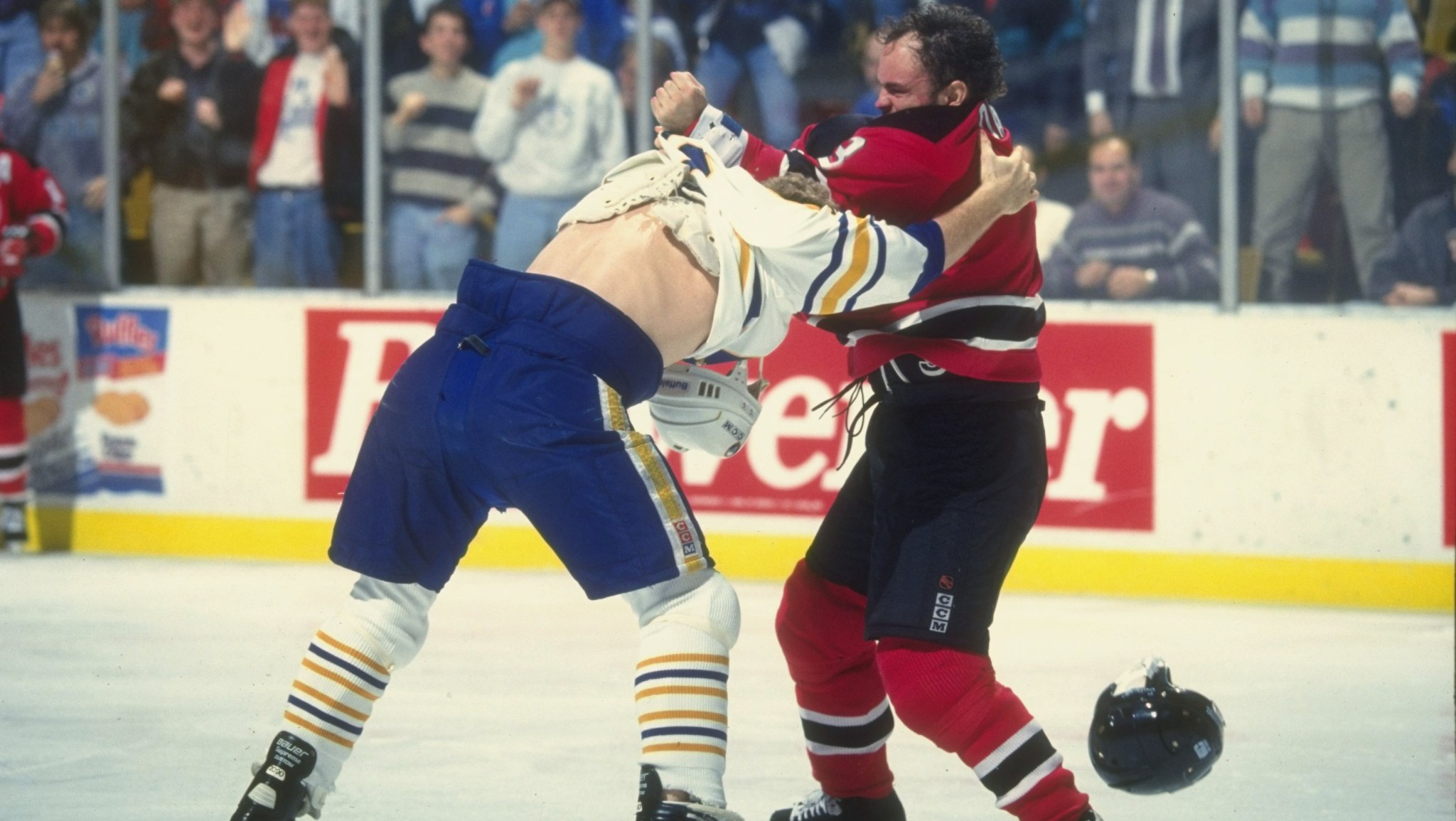 Hockey history is a rich tapestry of traditions, trends, and innovations. Many stuck around to become part of the game’s enduring fabric. Others … not so much. Today we will look back at one of the odder things that used to be part of the NHL’s culture and wonder how exactly it made sense at the time and that everyone was OK with it.

Have you ever been in a fight with a Canadian? Probably not, since we’re generally a friendly and non-threatening bunch. But there are certain lines that you just cannot cross, like disparaging socialized medicine or saying you thought Shawn Michaels was better than Bret Hart, and crossing those lines can lead to the nearest Canadian setting aside the Margaret Atwood novel they’ve been pretending to read and throwing down.

And when that happens, you’ll notice that while fighting a Canadian is a lot like fighting anyone else, there are certain key differences. We apologize after every punch. We pause every few seconds to take a sip of our double-double. And, at some point in the fight, we are going to try to yank your shirt up over your head.

That last one may seem a little odd, but don’t worry; we’re just instinctively reverting to what we grew up with. That’s because every Canadian is raised on a steady diet of watching hockey, and for several decades, that shirt-yank move was standard operating procedure in any hockey fight. It even had a name: “jersey,” used as a verb. As in “I was losing the fight, but then I jerseyed him and went to town.”

Jerseying is rarely seen these days thanks to the introduction of the tie-down, a small strap that connects the back of a player’s jersey to the top of his or her hockey pants. Today, the NHL has a rule that makes tie-downs mandatory for any player who fights, so with only rare exceptions, you don’t see a player’s sweater come off during fights anymore.

And that’s probably good news, because man, the whole “jersey over the head” thing really did get progressively weirder over the years.

Back in the ’60s and even into the wild ’70s, a player getting jerseyed wasn’t an especially common sight. It would happen, sure, but it was usually an accident — two opponents would square off, grab each other’s sweaters and wrestle around, and sometimes one guy would choose the wrong moment to duck and the jersey would slide up his back. The ending of this fight between legendary enforcers Dave “The Hammer” Schultz and Terry O’Reilly is a good example — Schultz’s sweater slides up, he quickly manages to get it back down, and everyone goes on about their business.1

It didn’t always end that well — having a sweater pulled over your head was certainly a disadvantage, and occasionally a guy would lose a fight because of it. But that was relatively rare, since even in the absence of tie-downs, most players wore their sweaters tight enough that getting them up and over their heads took some work.

That started to change in the ’80s, as the era of the specialized enforcer dawned and fighting techniques evolved. Suddenly, yanking an opponent’s sweater over his head became a common strategy.

The move always seemed to exist in a questionable gray area of the fighter’s code. Enough guys did it that it was clearly considered a commonly accepted technique. But many players, at least occasionally, would avoid using it to gain an advantage over a temporarily helpless opponent. For example, in this classic fight between Behn Wilson and Wendel Clark, the only moment when somebody isn’t throwing a haymaker comes when Wilson’s sweater slips over his head about 20 seconds in and Clark noticeably hesitates until his opponent can see again.

As the jersey technique became more common, it quickly became apparent that yanking your opponent’s sweater over his head was a bit of a double-edged sword. Sure, it gave you a temporary advantage. But once the sweater was gone, so was your ability to hold on. Other than their shoulder pads, most players wore only T-shirts under their sweaters, and some didn’t even wear that much. Hockey fights are largely about leverage and balance, and if there’s nothing to get a grip on, you can find yourself in big trouble.

It wasn’t long before some enforcers started using that to their advantage. Wait for your opponent to get a good grip, let him start pulling you toward him, and then quickly duck down. If executed properly, your sweater would slide clean off, leaving your opponent holding it (and not you). Then you were free to tee off.

That sounds fine in theory — all’s fair in love, war, and hockey fights, and all that. In practical terms, it led to an era when we all got way too familiar with the naked upper torsos of various enforcers. Here’s Marty McSorley getting disrobed at the end of his legendary playoff bout with Clark, and again during his marathon fight with Bob Probert. Here’s Shane Churla naked from the waist up after a scrap with Todd Bertuzzi. Here’s Stu Grimson managing to get jerseyed by a referee, because this was just the sort of thing that happened in the old Norris Division.

And nobody spent more time getting naked on NHL ice than a guy who needs his own section in any discussion on jerseying: longtime Sabres tough guy Rob Ray. Ray was the master of getting himself jerseyed almost immediately, at which point his hapless opponent would be left awkwardly trying to hold on to a sweaty half-naked dude. Sometimes he would already be stripped down by the time he showed up.2 It was so common that announcers would be genuinely surprised any time Ray remained clothed a few seconds into a fight.

And yet even in that fight, Ray winds up shirtless by the end of it. This is how all of his fights ended. I swear, I think I’ve seen Rob Ray topless more times than my own wife.

By the time that guys like Ray were perfecting the intentional-jersey technique, even the most old-school fight fans were starting to wonder if the league needed to do something. The final straw came in the mid-’90s, when a handful of players were wearing jerseys so comically oversize that they looked like little kids wearing their dad’s clothes. Others were rumored to be cutting slits in their sleeves and then taping them together so that they’d rip at the first tug, freeing up arms to throw haymakers. Eventually, the inevitable: some guys just decided to cut out the middle man altogether and disrobe before the right had even started.

It takes a lot to embarrass the NHL, but this sort of nonsense got the job done. For the 1994-95 season (the one immediately after the fight above), the league made removing your own sweater an automatic game misconduct. Two years after that, the league made tie-down straps mandatory on all jerseys, again with violations punished by a game misconduct. Fittingly, the change was occasionally referred to as the Rob Ray Rule. It essentially spelled the end of the jersey as a fighting technique.

These days, you almost never see the move executed intentionally, although some players still try a variation where you pull the front of your opponent’s sweater up over his face. You’ll occasionally see a scrap break out between non-fighters in which one doesn’t have a tie-down — it happened to Carl Hagelin in the playoffs a few years ago, although the referees found a way to let him off the hook.3

You no longer see players getting pummeled by an opponent they can no longer see, nor do you see guys tossing their own jerseys off before a fight even starts or half-naked guys being escorted to the penalty box every night. Those are all good things. As divisive as fighting-related rule changes like the instigator penalty can be, we should all be able to agree that on this one, the NHL got it right. Jerseying is gone; may it never return. It had one hell of a run for a good decade or two. I’m not sure what to tell you. Somehow, it made sense at the time.