How the Calgary Flames Are Laughing at Advanced Stats 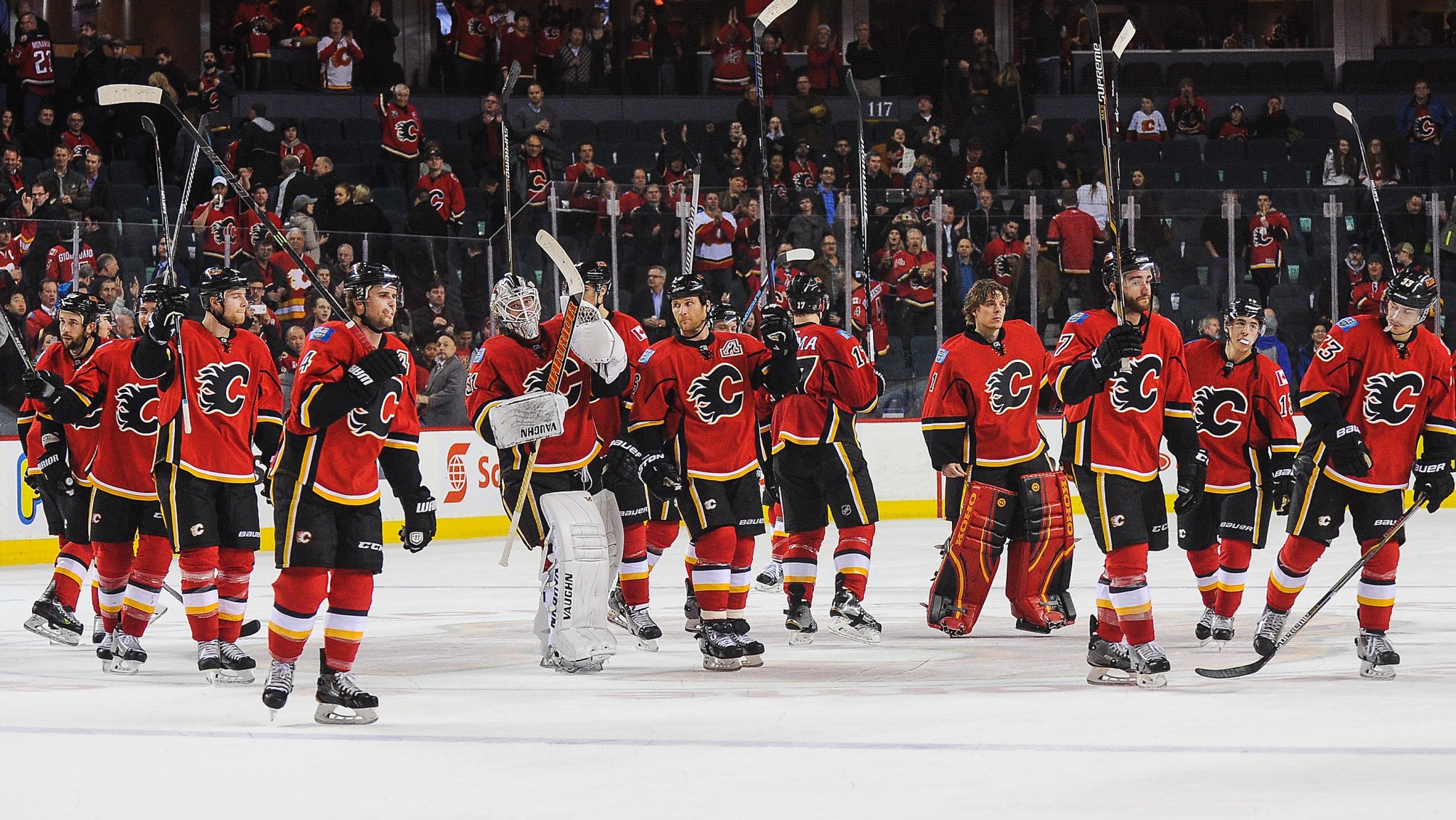 Stop me if you’ve heard this one before: There’s an NHL hockey team that’s not all that good according to the numbers, yet somehow keeps winning. The stats guys say that it can’t possibly continue, that we’ve seen this movie before, and that history tells us the ending won’t be happy. But others aren’t so sure, wondering if maybe, just maybe, this is the team that’s figured out a way to beat the system.

Unless you’re brand new to hockey, you have indeed heard this one before, and you’ve heard it more than once. Four years ago, it was the Dallas Stars. The year after that, it was the Minnesota Wild. Last year we had two teams, the Colorado Avalanche and the Toronto Maple Leafs, offering different interpretations of the same role. All of them seemed to be defying the numbers. All of them eventually crashed back down to earth.

This year’s overachievers are the Calgary Flames. Heading into the season, they weren’t expected to be very good. And 73 games in, they haven’t been — at least according to many of today’s most-used stats, which rely on proxies for puck possession to determine which teams are most likely to experience sustained success. The more you have the puck, the more you should win. It doesn’t always work out that way in the short term, as factors like goaltending, special teams, and just plain luck can get in the way. But wait long enough, and your possession numbers catch up to you. They always do. We’ve been down this road before. We know what’s coming. We’ve seen it all before, over and over again, for years.

So why do this year’s Flames seem like they’re different?

Let’s start with the numbers. By now you’re sick to death of hearing about hockey’s new wave of advanced stats, most of which aren’t especially advanced at all. The new thinking has redefined hockey analysis, invaded NHL front offices, and started showing up in even the oldest of old-school media coverage. At a basic level, those numbers tend to focus on possession rates, a relatively new approach that turns out to tell us plenty about a hockey team.

And what it seems to tell us is this: A team’s possession numbers are just about the single best predictor we have of future success. If you woke up from a coma three-quarters into an NHL season and were forced at gunpoint to pick the teams with the best chance at winning the Stanley Cup using only one stat, you’d want a look at the possession numbers.1 Ideally, you’d want those numbers to be for even strength and in close situations only, or even better, score-adjusted. Those are important distinctions, but to keep things simple, we’re just going to lump everything together as “possession” today. Possession numbers typically predict the future better than anything else — better than goals scored or allowed, better than shooting or save percentages, better even than wins and losses. A big part of that is that possession numbers tend to be much more consistent than other stats, which rely on smaller sample sizes and can fluctuate wildly from game to game and from week to week.

So possession tends to equal wins. Which you’d expect, when you think about it — a hockey team that can maintain a 55 percent–45 percent edge in possession is like a baseball team that gets 11 innings at bat while the other team gets the usual nine. That’s an enormous advantage, and while it wouldn’t translate into a guaranteed win every night, over the course of a long season you’d expect it to add up.2

And in most cases, it does. For example, if you’re the sort of fan who looks at possession numbers, you weren’t remotely surprised when the Kings won the Stanley Cup as an 8-seed in 2012, and you barely blinked when they did it again as a 6-seed last year.3 And you knew that the Stars, Wild, Avalanche, and Leafs were all headed for a fall, even as their fans insisted they were for real. A basic understanding of possession stats is the great spoiler alert of hockey fandom.

All of which brings us to this year’s Flames, one of the worst possession teams in the league. They sit 28th in score-adjusted Corsi, and the only other team in the bottom third that’s even close to a playoff spot is doing it on the back of a goalie who’s probably going to win MVP. And it’s not just the fancy stats that point to the Flames being a bad team. On paper, they don’t have a ton of talent, and their best player and captain, defenseman Mark Giordano, was lost for the season last month.

And yet, numbers be damned, Calgary just keeps winning. A team that everyone expected to contend for last place overall is instead right in the thick of the playoff race in a very tough Western Conference. After one month, it was a cute early-season plotline. After two, it was getting into Cinderella territory, a fun little story that nobody really took seriously. You couldn’t even say the Flames were counted out, because that would imply that anyone had ever counted them in.

We’ve spent the season admiring the Flames’ success while waiting for the inevitable correction. With a dozen games left, it still hasn’t come.

And again, we’ve been through this before. But while the story of this year’s Flames will seem familiar to anyone who’s paid attention to the hockey analytics world over the past few years, it’s not quite the same. For one, the Flames are the first outlier team to emerge after hockey’s Great Stats War was decisively settled, which is why they haven’t produced quite as much of the bitter sniping that characterized the previous chapters of this debate.

But a bigger difference is the way the Flames are winning. When other teams have defied the numbers, we’ve been assured it was because they’d found a way to beat the system. Possession stats treat all shots as equal, so in theory, a team with the right talent could play a style that relied on shot quality to buck the percentages. Did you ever think of that, stat guys?4

For the most part, that’s not the angle that the Flames and their fans are taking. Instead, they’re convinced that Calgary is winning hockey games the old-fashioned way: with grit, character, hard work, and team toughness. The Flames may not have the talent, but they win anyway, because most nights they just plain want it more than the other guys do.

It’s all clichéd enough to make a cynical hockey fan’s eyes roll into the back of his or her head. Except that, well, it’s not completely untrue.

The Flames face more talented teams and bully them out of the building. Defenseman Kris Russell just set an NHL record for blocked shots in a game. Giordano is still working harder than many of the league’s top stars, even though he can’t play. New guys you’ve never heard of with funny names show up, then turn into Peter Forsberg. And game after game, the Flames fall behind early, only to claw their way back into competition. It’s become a running joke among fans by now — Oh, look, Calgary’s down 3-0, time to tune in for the big comeback.

And I’m sorry, but it’s all just a crazy amount of fun. I know I’m not supposed to say that — unbiased reporting and all that — but if you’re not enjoying the hell out of the 2014-15 Calgary Flames, then I just don’t know what to tell you. Whether the numbers like it or not, the Flames have become the league’s most likable team. And that’s where two more key differences come into play.

First, all of those other teams that flew too high and then crashed back to earth were, in their own way, easy to root against. There was a sense of arrogance to their stories, as if they were a little too eager to congratulate themselves for somehow finding a cheat code nobody else knew about. Heck, based on some of his public comments, Toronto GM Dave Nonis did everything short of twirl his mustache while tying stats guys to train tracks. As long as you weren’t a die-hard fan of one of these particular teams, watching them fall on their faces was a certain kind of fun.

But how do you root against this Flames team? You can’t. You shouldn’t. You’re a bad person if you do.5

This year’s Sloan Sports Analytics Conference included a panel called “Is Analytics Taking the Joy Out of Sports?” That question was generally met by a collective wanking motion by stats types, at least the ones I follow. But when it comes to stories like this year’s Flames, I get where the panel is coming from. I want to believe. I want to live in a world where a bad team can literally will itself into the playoffs through sheer resolve and determination. Life as a sports fan is just more fun if the Calgary Flames are for real.

Of course, they probably aren’t. And that’s where the final difference comes in. If we’ve learned one thing about the whole “statistical outlier defies the odds” story line, it’s that it’s supposed to end with the big comeuppance. The Wild, the Stars, and (especially) the Maple Leafs crashed and burned in the second half, missing the playoffs. Last year’s Avalanche managed to make it through the regular season unscathed, winning their division and challenging for first overall, but then lost in the opening round to the underdog Wild and will miss the playoffs this season. And in every case, the numbers guys could claim victory. “See,” they could gloat, “we told you this team wasn’t any good, and by the end of the season we’d been proven right.”

But that sort of victory lap can’t happen with this year’s Flames. They’ve already overachieved to such an extent that there’s no conceivable collapse that could result in their season being labeled a failure. If they make the playoffs and get smoked in the first round, they’ve still won. If they stay in the race but narrowly miss out on a postseason spot, they’ve still won. Even if the team literally lost every game left on the schedule, you’d still have to look back on their season as a triumph. The Calgary Flames have already won. They’re the first team in the analytics era to defy the numbers for a full season and still make it through to the other side.

None of which is to say this will all end especially well for the Flames. They’re not going to win the Stanley Cup, after all, and there’s a fairly good chance they’ll still miss the playoffs. More important, this season’s success might inspire them to try to fast-track the patient rebuilding strategy they’ve been following, which could end up setting them back years. Flames fans may someday look back at this miracle season as the worst thing that could have happened to the club.

But that’s a story for another day. For now, I’m going to enjoy the 2014-15 Calgary Flames storybook for as long as they have left. Even if I have to forget everything I know about real life to do it.

‘The Grantland NFL Podcast’: J.J. Watt’s Contract Restructuring, and More From the Mailbag