Golden in Denver: How the Miraculous Nuggets Have Become One of the League’s Best Teams 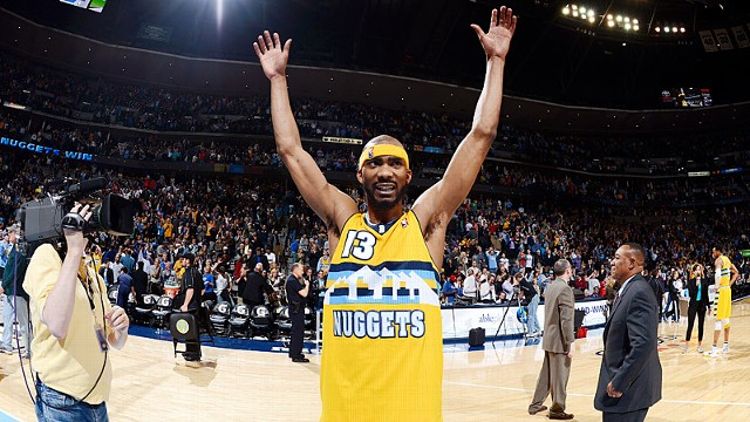 There’s long been a general skepticism around the league about whether the Nuggets, so exciting and so dominant of late, can translate their regular-season success into true title contention. Three questions drive that skepticism:

1. Can they score in the clutch?

2. Can they score in the half court?

Denver has now won 14 straight after an improbable comeback against Philly on Thursday night that had George Karl telling Grantland this morning, “I woke up a lucky, lucky guy.” And though the schedule during that stretch has featured plenty of rest, close calls, and bad teams, it’s also brought a handful of showdowns with the Western Conference’s elite — including two wins over the Thunder.

Denver has played top-five-level ball on both sides of the floor during this stretch — sort of a necessity for any 14-game winning streak. But dig a bit further, and watch the tape, and there are even more encouraging signs a real contender might be developing in the Rockies: The Nuggets are scoring well in the half court and destroying teams in crunch time.

According to Synergy Sports, Denver has averaged 0.898 points per possession in the half court this season. That’s 13th-best overall — decent, but probably not quite good enough to do serious damage in the playoffs, when the league’s collective pace slows and teams take better care of the ball. But over Denver’s last 20 games, that half-court efficiency number is up to .924 points per possession — the equivalent of the Clippers’ no. 6 overall mark. (Denver has been even better if you isolate its winning streak.)

There are a lot of things going on here, but Denver’s uptick in half-court scoring really boils down to Ty Lawson’s improved play, Wilson Chandler’s integration into the offense, and the coaching staff’s ability to gradually add a bit of spice and misdirection to Denver’s game. Those last two things are connected; Chandler’s not a star, but he’s a very creative player who can do lots of stuff in the half court. He’s comfortable as a spot-up guy, but he’s a decent mover off the ball, he sets screens from unpredictable angles, and he’s dynamite at slipping screens on hard cuts into the paint that suck in opposing defenses.

There’s just more flavor now in Denver’s half-court game. They’re using more wing/point guard screens at the start of possessions in order to catch defenses off guard and create mismatches — a tactic the Lakers used against Denver in the playoffs last season:

Karl has Denver using much more screen-the-screener action, where the big man setting a high screen for Lawson (or for Prof. Andre Miller, PhD) will take a pick from another Denver player on his way to setting that high screen. Another tweak on that action: plays on which a big man will set a down-screen for a shooter along the wing and then sprint up to set a high screen for a Denver point guard. Watch Kosta Koufos do this on the left side of the floor, and note how far his man (Kendrick Perkins) falls behind the play in helping on that first screen:

There are also plays in which one Denver player will sprint up as if he’s going to set a screen, only to dart back down into the paint as Denver’s other big man comes up to set the “real” pick for Lawson or Miller:

“There’s no question we’re trying to get more clever in our five-on-five game,” says Karl. “It’s very difficult to play the way we do and execute in [the half court]. We have some pick-and-roll stuff that we execute fine, but we’ve needed to add some motion stuff and some movement to kind of be more clever.”

These little pieces of misdirection — screen-the-screener, fake screens, etc. — are designed to keep defenders confused and off-balance, and in turn make it easier for Lawson and Miller to get clean looks out of the pick-and-roll. And that’s really what’s changed for Denver in this stretch: They’re killing it on pick-and-rolls in which the ball handler finishes the play, per Synergy. They’ve averaged .959 points per possession on such plays over their last 20 games, a mark that would lead the league by a mile, and way above Denver’s ho-hum season-long average of .816 (no. 9 overall).

Lawson has been on fire from all over the place, but especially from midrange, where he’s shooting 53 percent over his last 15 games after hitting at a sub–40 percent mark over the season’s first 45 or so games, per NBA.com. Miller is a ridiculous 14-of-20 from midrange during Denver’s winning streak. The Nuggets don’t want to take midrange jumpers — they might set the all-time record for points in the paint this season — but such shots are a necessity on some possessions, and Karl is using motion-based trickery to at least make those midrange looks a bit cleaner, he says. “We don’t like to shoot a lot of jump shots, but we’re getting better looks at them,” he says. Denver is also using more pin-down sets, where two players will set a monster double-screen for Lawson and then curl down toward the paint to set the same kind of monster double-screen for a wing player (often Andre Iguodala or Corey Brewer) for a Rip Hamilton–style catch-and-shoot chance.

And when that catch-and-shoot isn’t open, that player will simply continue into the lane, compromise the defense, and try to find an open cutter someplace along the baseline. Nearly 12 percent of Denver’s possessions end with a cutter finishing the play, the highest mark in the league and a nice way of illustrating how Denver has created a robust interior half-court offense without any reliable post-up game.

Oh, and it’s also working in crunch time, Denver’s alleged bugaboo among the “you need a franchise cornerstone to win a title” crowd. Denver has been among the league’s two or three best crunch-time offenses all season, regardless of how you define “crunch time.” It’s fifth in points per possession in the last five minutes of games in which the scoring margin is at five points or fewer, per NBA.com. Cut that to three minutes/three points, and it’s no. 2. Two and two? No. 3. One minute and one point, the clutchiest of all clutch situations? Denver is no. 1 in a landslide (and also in a tiny sample size).

And if you watch the tape, you’ll see the Nuggets are getting some very good looks in these situations, along with the usual low-percentage step-backs out of isolations. They’ve leaned a lot on the Lawson–Danilo Gallinari pick-and-pop, which has gotten some good shots for both players, created some switches, and drawn enough attention for Prof. Miller to creep unnoticed along the baseline for quick-hitting layups. The Lawson-Chandler pick-and-pop has joined Lawson-Gallinari of late as another crunch-time weapon, and Chandler’s more likely than Gallo to do something unpredictable out of this action — either fake the screen entirely (see no. 8 here for video) and pop out for an open 3, or slip hard toward the rim before really setting the pick.

Chandler has been extremely valuable for Denver, as Brett Koremenos recently pointed out. He’s shooting a career-best (and probably unsustainable) 41 percent from deep, and his ability to play power forward has given Karl even more flexibility in running out small lineups — units that have generally been very, very good with Gallinari in the role of small-ball power forward. Karl can even pair Chandler and Gallinari in such lineups, creating units that play both “big” and “small” at once; Denver has outscored opponents by a whopping 15.9 points per 100 possessions in the 279 minutes the pair has played together, per NBA.com.

Karl says Chandler is the team’s best help defender, and he had enough faith in Chandler’s defense Tuesday against Oklahoma City to run out an ultra-small lineup that hadn’t seen the floor for even five minutes before that game: Chandler, Gallinari, Brewer, Lawson, and Prof. Miller. That unit blitzed a small-ball Oklahoma City unit over about 5:30 of playing time, and though Karl said he used it more as a snap response to Oklahoma City playing a small-ball lineup with Durant at power forward and Nick Collison at center, he may have discovered a nice weapon if the two teams meet again. “I sort of fell into that,” Karl says. “I didn’t really think about it as much as I was reacting to Scotty [Brooks] using Durant and Collison.” He thought Chandler would be his best defensive option against Collison, since Collison isn’t really an interior threat, and Chandler can pressure Collison hard at the elbows and on the perimeter — places where Collison does damage as both a screener and passer.

The lineups provided tremendous spacing for a Denver team that sometimes struggles to generate it; look at how much room there is on this possession, and how many confusing actions Denver runs before getting to what it really intends to do:

It’s unclear if Denver could really go this small for meaningful stretches against other top Western Conference teams, or even if Karl would risk it against small Thunder lineups featuring Kendrick Perkins or Serge Ibaka at center. But it worked on Tuesday, and everything has been working for Denver of late.

That includes the team’s defense, which has crept to 11th overall in points per possession for the season and has generally improved throughout. Kenneth Faried has slowly improved his positioning and pick-and-roll defense, even if he’s still prone to lapses, and he has unleashed a new level of aggression over the last 20 games, Karl says. The Nuggets are trapping more on pick-and-rolls and in general, often sending Faried from the hoop to double a terrified ball handler beyond the 3-point line. They’re switching even more when they have the right personnel on the floor, and they’ve adopted San Antonio’s tactic of sending an extra defender from the baseline to double post-up players, Karl says. “But who really posts up that much anymore?” Karl asks with a laugh. “You really don’t see it too much.”

But will that continue when the playoffs start and turnover rates tend to drop league-wide? It’s a fair question, especially since the thirst for theft fuels some unhealthy gambles — one of Denver’s bad defensive habits that gives it trouble against 3-point shooters. The Nuggets have tightened that up a bit over this winning streak, but it’s unclear if that’s a product of real improvement, random luck, or a schedule that’s brought in a lot of bricktastic long-range teams. “We don’t even really want to win the 3-point line,” Karl says. “We just want it to be a push.”

The skepticism remains, and until Denver wins a first-round series with this style of play, the questions will be fair game. But the league can’t ask those questions with the same sarcastic smirk anymore, because the Nuggets have started to answer them in the affirmative.