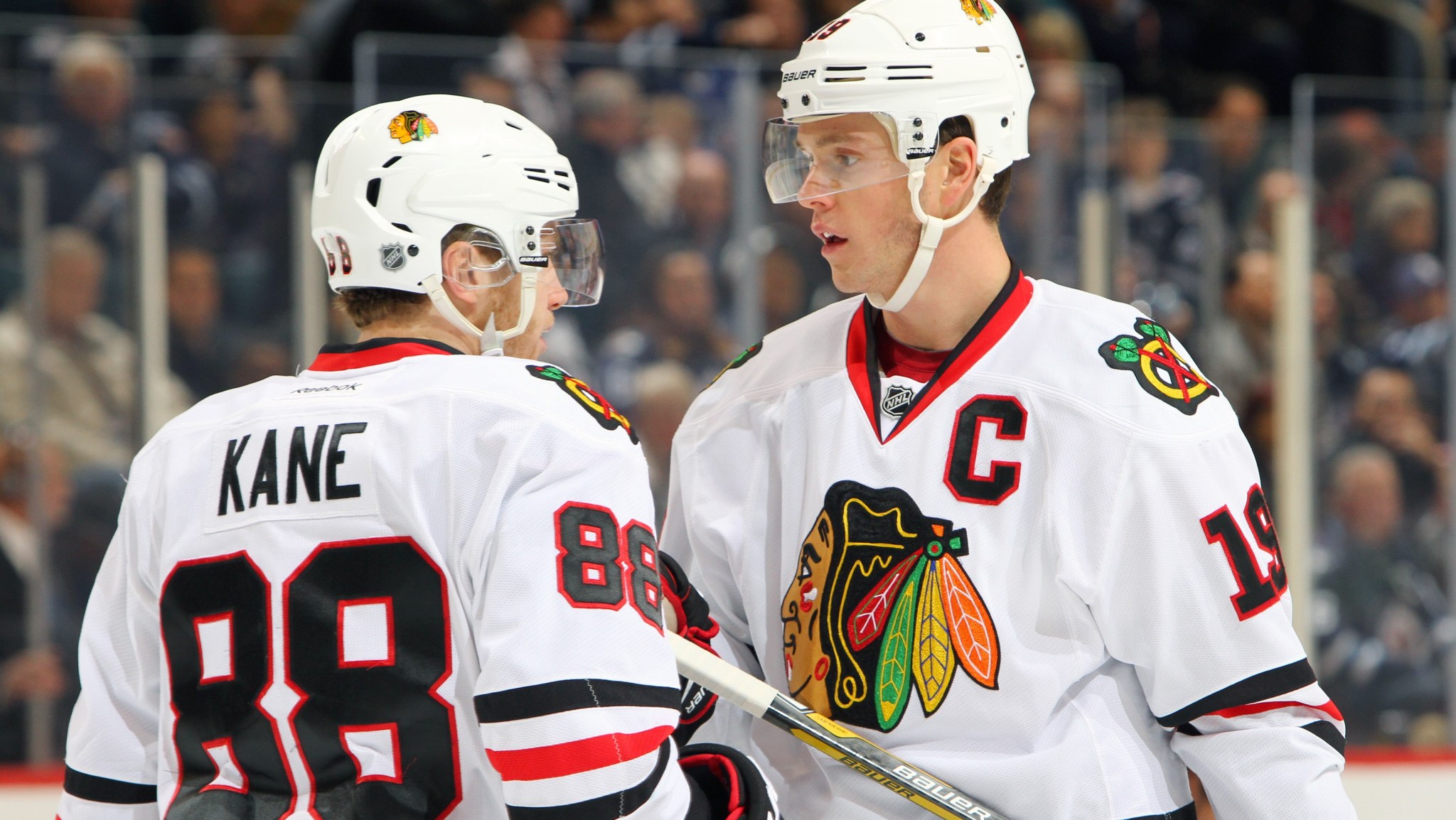 The P.K. Subban saga is over, and it ends with a windfall. The Habs star agreed Saturday to an eight-year, $72 million deal that ends an extended stalemate between the two sides that dated back almost two years.

In doing so, he became the most expensive defenseman in league history in terms of annual cap hit ($9 million). And his deal comes just weeks after Chicago’s Jonathan Toews and Patrick Kane became the first two players to crack the $10 million cap hit barrier, signing identical eight-year, $84 million deals on July 9.

As you might expect, that’s led to some debate among fans in Chicago, Montreal, and elsewhere. After all, while these are some very good players we’re talking about, does it make sense for them to be making more than Sidney Crosby or Shea Weber or [insert your favorite superstar here]? Are these teams sending their cap situations up in smoke? And aren’t these exactly the sort of spiraling deals that keep forcing the league into lockouts?

If that all sounds familiar, it should, because we seem to go through this every time a star player signs an extension. But while it makes sense to approach any big contract with caution in a hard-cap league like the NHL, these deals really aren’t as scary as they seem. So here are a few important points to keep in mind before panicking over the latest massive extension.

Be careful with those comparisons: The first thing we try to do when a player signs a new contract is generate a list of comparable players and see how the new deal measures up to what those guys got. But that’s easier said than done with elite players. They don’t have many comparables; that’s why they’re considered elite.

Complicating things further, we need to stay away from comparing deals signed under significantly different circumstances. For example, some have tried to compare Subban’s deal to those signed by guys like Weber or Ryan Suter. But neither works, because while Subban was a basic restricted free agency signing, Suter was unrestricted and Weber signed an offer sheet. Another restricted free agent extension like Drew Doughty is a better match, but even that only goes so far because the Kings were buying two fewer years of unrestricted free agency.

Toews and Kane present a similar problem, with UFAs like Zach Parise or Marian Hossa not really working. The best comparison for those two would seem to be Crosby. But that raises a new problem.

The new CBA changed everything: Two years ago, Crosby signed an extension worth $104.4 million. Like Toews and Kane, the signing came after Crosby’s seventh season and with one year left on an existing five-year deal. That seems like as good a match as we could expect to get, and it’s led some to point out that both Toews and Kane will carry a cap hit $1.8 million higher than Crosby. Given that the Penguins’ star is the consensus pick for best player in hockey, the thinking goes that the two Blackhawks must be overpaid.

Except it’s not that simple, because Crosby’s deal was signed under the old CBA. It’s a 12-year deal, while Kane and Toews were limited to a maximum of eight. And Crosby’s deal plunges in the final few years, dropping all the way down to $3 million over each of the final three seasons. He’ll be in his late-thirties by then and may not even still be playing. While it’s not quite as extreme a case of cap circumvention as something like Hossa’s deal, it’s not far off.

Under the new CBA, the lowest annual salary on a deal can’t be less than 50 percent of the highest year. Both Kane and Toews take advantage of that, dropping from $13.8 million in Year 1 to $6.9 million by the end, so the deals are still front-loaded. They’re just not front-loaded as much as Crosby’s deal, because they can’t be.

This matters, because front-loading a very long-term deal was a tool for teams to artificially lower the annual cap hit while still making sure the player got paid. Crosby’s deal is actually worth more money over the first eight years than Toews or Kane are getting, but the plunging value in the later years (which, again, Crosby may never play) keeps the annual cap hit much lower.

Once the NHL closed those loopholes, it was inevitable that cap hits would rise. That doesn’t mean Toews and Kane are better than Crosby, or greedier, or overpaid. It just means they signed under a different set of rules.

The salary cap keeps going up, so the best way to think of deals is in terms of cap percentage: Subban’s deal shattered the record for cap hit for a defenseman. He didn’t just shatter the $9 million barrier; he was also the first to even break $8 million.

But let’s look at things a different way. Subban’s $9 million cap hit starts this season. The salary cap for this year has been set at $69 million, so his deal is taking up just more than 13 percent of the Habs’ cap space.

The Kane and Toews deals don’t kick in until next year and we don’t know what the 2015-16 cap will be, but we suspect it will rise significantly because the new Canadian TV deal is kicking in. If we estimate it at $75 million (and that may be conservative), Kane and Toews will each be eating 14 percent of the Hawks’ cap.

And, of course, even if you still consider those deals as too high through the lens of cap percentage right now, that figure will drop every year as long as the cap keeps rising. That’s not a guarantee of increasing value — the contracts are long enough that at some point, the players will hit an age where their production will start to drop too — but it’s worth considering.

Of course, none of that means that a rising cap should be taken as a blank check to sign terrible contracts. Plenty of awful deals have been justified with cries of “but the cap will go up.” But the rising cap has a way of making questionable deals seem OK in hindsight. And that’s been especially true for extensions.

Look at history: Ever since the first few seasons of the cap era, teams have been obsessively locking up their young stars to long-term deals rather than letting them get a sniff of free agency. Every year, several players get big contracts, and almost every one of them gets criticized somewhere for making too much.

And yet, for a league filled with plenty of truly terrible contracts, it’s surprisingly hard to find many extensions that you’d look back on as horrible mistakes. There are certainly some that seem iffy — Travis Zajac, Jordan Staal, Tyler Myers — and sometimes you’ll get a Kris Letang situation where unexpected health concerns set in to make a deal look questionable.

But compared to the league’s track record of handing out truly awful deals in free agency, the success rate for long-term extensions to star players is remarkably solid. That’s especially true when you focus on true stars, who almost always end up representing a good investment (as opposed to throwing money at third-line depth and character guys, which does not).

The bottom line is, at least when it comes to young defensemen and forwards, these sorts of deals have a tendency to end up working out. You may have noticed that we left a position out, so let’s drop in a quick cautionary note:

Be careful with goaltenders: We’ve been over this before, so I won’t belabor it. But long-term extensions for goaltenders are risky business, because it can take a long time to know what you have with a guy who plays net. By the time you can really feel confident you’ve got yourself a star, he may not have enough years left to justify a max-length deal. Proceed with caution.

When in doubt, just wait for the next deal: Does anyone remember Phil Kessel’s extension? Signed on the eve of last season, his eight-year, $64 million deal was the largest ever handed out by the Toronto Maple Leafs. The deal drew its share of criticism from Leafs fans and outright mockery from fans of other teams. Ten months (and another 80-point season) later, a very similar player in Kane signs for $20 million more, and Kessel suddenly seems like a bargain-bin deal.

That has a funny way of happening. If Kane and Toews seem overpaid now, check back when Anze Kopitar re-signs with the Kings this time next year.

Finally, one last point that’s not directly related, but is worth remembering …

None of this has anything to do with lockouts: Under the current CBA, players and owners split hockey-related revenue 50/50. End of story. That amount is guaranteed through escrow. A specific player getting a big contract does nothing to change that; all it does is shift around how the players’ share is divided up. Those additional dollars will ultimately come out of some other player’s pocket — not an owner’s, and not yours. If you hear someone moan “What did we just have a lockout for?” when a big contract gets signed, you’re listening to someone who doesn’t understand how the salary cap works. Ignore them.

So there you have it. With a little bit of practice, you too can learn to stop worrying and love record-breaking contract extensions. And you don’t even need to feel rushed — we’ve all still got 11 months to practice before the $100 million Steven Stamkos deal is announced next summer.