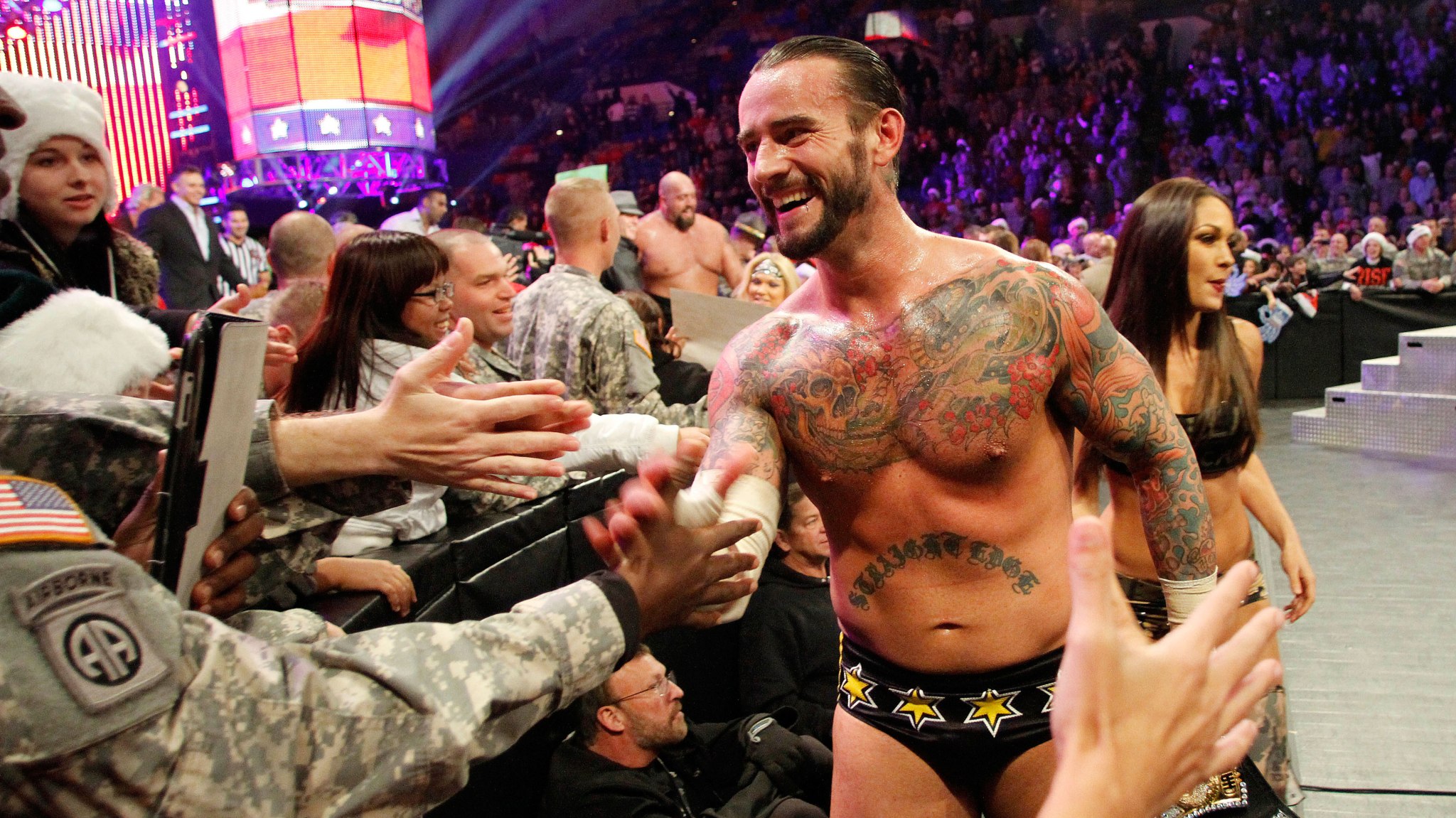 The biggest news in pro wrestling has nothing to do with the Royal Rumble or WrestleMania 30. It’s that CM Punk, antihero megastar and flag-bearer of the Reality Era, has apparently quit wrestling. On Wednesday morning, word started leaking that Punk had walked out of the WWE Raw taping Monday in Cleveland and told Vince McMahon he was “going home.” Punk has six months left on his contract (which runs through sometime in July), and WrestleMania is right around the corner. For the wrestling uninitiated, this would be like Richard Sherman walking out on the Seahawks. Today.

The reasons for Punk’s departure are unclear, though his simmering dissatisfaction has been an ongoing affair — in real life and in WWE story lines — for more than a year. He has said he was willing to quit before he signed his current contract in summer 2011, just as he play-quit on television as a part of the WWE story line surrounding his contract negotiations. Last Friday, an interview with MMA writer Ariel Helwani came out in which Punk commented on the ambiguity of his status with WWE. “Everything’s up in the air,” he said. Referencing his previous near-departure, which was codified as a moment of reality in WWE lore, he said, “Just to avoid a little déjà vu, I’m going to dance around that question.”

There are reports that Punk was originally scheduled to face Randy Orton for the title at WrestleMania 30, only to have that spot usurped by the comebacking Batista. (In the Helwani interview, Punk said he didn’t like guys coming back just for WrestleMania and taking spots from full-time guys who “deserved it” more, but added that Batista’s full-time two-year deal negated such complaints.) Newer rumors suggest that Punk’s consolation prize — a match against Triple H — may have been regifted to the insurgent Daniel Bryan. Such backstage machinations could also help explain why WWE has been so slow about choosing a direction for Bryan despite his spiking popularity.

After Sunday’s Royal Rumble, rumors also began circulating that Punk had suffered a concussion during the event. Rewatching the Rumble, it appears that Punk is working at about half-speed roughly from the point when Alexander Rusev hits him with the press Samoan Drop. At about the 12-minute mark, you can see a referee checking on him as he slumps in the corner. He continues on but spends long stretches of the match lying docilely on the edge of the apron or doubled over against the ropes, away from the conflict. That’s not totally unusual for a Royal Rumble match, of course, but Punk’s inaction was peculiar. Wrestlers have clear signals to their cohorts that they’re not to be messed with, and Punk’s postures throughout the match indicate such signaling. Around the 28-minute mark, after Sheamus enters (which occurs as Punk is being set up for the Shield’s triple powerbomb; it’s unclear if they hit it), Punk can be observed hiding out beneath one of the turnbuckles. Soon after, JBL comments that “Punk’s doing the smart thing — staying out of harm’s way.” Punk exited the match when his rival Kane, whom he had previously eliminated, yanked him out of the ring, then tossed him into the ring barrier, drove him headfirst into the steel ring steps, and finally choke-slammed him through the announcers’ table. If Punk did sustain a concussion and we’re assuming it occurred sometime earlier in the match, Kane’s moves didn’t cause Punk’s head injury, but they couldn’t have helped.

People backstage at Raw on Monday saw Punk arguing with WWE brass about a concussion issue. Punk yelled something to the effect of “I’ve passed all your fucking concussion tests” before he left the building. He didn’t appear on Raw, and he was subsequently removed from the WWE travel plans and from the house-show lineups. He sent out a tweet that wasn’t appreciated at the time: “Thanks for all the support. Keep being you guys, it’s pretty cool.”

Thanks for all the support. Keep being you guys, it's pretty cool.

Yesterday, as the story started picking up steam online, WWE’s online store tweeted that the new “CM Punk ‘Best Since Day One’” ball cap was available for sale. This indicated that the WWE merchandise side didn’t know what was going on with the personnel side, or that WWE was desperate to quell rumors of Punk’s departure and thought pushing his hat sales would present a rosy, all-is-well picture. Shortly thereafter, WWE’s Twitter account unfollowed CM Punk’s, leading to widespread assumption — or, more precisely, reinforcing the already festering theory — that this was all a “work,” a highly realistic story line playing itself out in social media. Punk “quit” once before, after all, and in the pro wrestling world, nothing should be taken at face value, especially on the Internet.

It’s worth noting that there were fears that Punk suffered a concussion during his December 6 match with Dean Ambrose (which was taped December 3) and that he was feeling sick afterward. During the match, for what it’s worth, Punk lost control of his bowels, and afterward he tweeted, “Just shit my britches on smackdown. Please RT.” Later, he deleted the tweet and replaced it with one that read: “This poop just ain’t fun anymore.” At the time, this was funny in its sanitization (no pun intended) of the truth; today, it feels much more ominous.

There was an interesting moment early in the Helwani interview when Punk mentioned that he wanted to induct the Ultimate Warrior into the WWE Hall of Fame: “He’s a lot like me — he doesn’t like anybody, and everybody who ever worked with him has pretty much talked shit about him, so I’m just fascinated … We seem to have this strange relationship, this kinship.” Warrior was notorious for walking out on the WWF several times without warning — it’s one of the reasons his Hall of Fame induction is somewhat surprising. Could Punk now be taking a page out of the Warrior’s playbook? Was he teasing that in the interview?

The other obvious parallel — one that many people tweeted me — is “Stone Cold” Steve Austin. Punk has long referred to Austin — the loudmouth antiestablishment warrior — as an idol. Punk deliberately wore an Austin T-shirt when he cut his famous “pipe bomb” promo in June 2011. Austin walked out on WWE in 2003 after it suggested he lose to Brock Lesnar to help build the newcomer’s career. Austin rejected the plan, and he now claims to regret his action, calling it one of the greatest mistakes of his life. Austin tends to discuss those days in vague terms, but he often suggests he was involved in pretty heavy substance abuse. Painkiller abuse, in particular, is believed to have put him in an unfortunate headspace. The ongoing physical toll that leads wrestlers to painkillers is sadly common. Even now, as the WWE Wellness Policy polices some such abuses, the institutional masochism can’t be eliminated from the job description. Punk was honest about that in his interview with Helwani: “Some days I’m so beat up I don’t feel like putting my boots on, and some days I can still go out there and have fun … It’s brutal. You have to really want it. And I’ve been on that WWE schedule for a decade now.”

Another Austin moment comes to mind. In 2002, he was set opposite Hulk Hogan and the reformed New World Order, but he was mad about Hogan’s return to the company and refused to work with him. His spot went to the Rock, whose match with Hogan is now legendary. It may be just a coincidence, but Punk’s dissatisfaction with Batista’s return feels eerily similar.

This has been a very, very bad week for WWE, with reports that former star Matt Hardy was arrested after getting in a New Year’s altercation with his wife, along with news that a Pennsylvania grand jury is being convened to review the suspicious death of the girlfriend of Jimmy “Superfly” Snuka in 1983. Neither Hardy nor Snuka is currently employed by WWE, but in the Snuka case, Vince McMahon had acted as his mouthpiece in dealing with the police and district attorney during the initial investigation. A short time later, Snuka made his famous dive off the top of the steel cage and into wrestling lore. It’s a disservice to those cases to conflate them with Punk’s supposed departure, but altogether that’s an awful lot of bad press for WWE just a month before the launch of the WWE Network and two months before WrestleMania 30.

Which leads us back to the idea of this being another “worked shoot.” If anything could get eyeballs on WWE now, this kind of craziness will do it. I wouldn’t be surprised if this is all a work, but then again, I wouldn’t be totally surprised if WWE brought back Jim Ross to complain that after the SummerSlam panel, Vince fired his ass, so he’s bringing back one of your old friends, the Straight-Edge Superstar CM Punk, played by Corey Graves. Stranger things have happened.

If Punk’s concussion is real, it’s a mixed blessing for WWE. It acted admirably trying to keep him out of action, but the culture of pro wrestling, not too different from that of pro football or basketball, makes it hard to tell the athletes that they need to take a break. Moreover, if Punk is really gone, regardless of his self-destructive attitude, it will be a black eye for the WWE, which happens to be in the midst of a monumental expansion and at peak season with WrestleMania approaching. If the truth ends up being some combination of these scenarios, then we’ve entered a whole new era of the worked shoot. If it’s a ploy, then it’s brilliant. Because it’s not just a head fake. It’s using everything fans don’t want to believe about wrestling to turn the screw: The stars are unhappy; the physical toll is real; WWE management doesn’t do enough to protect its best talent. I can only assume Punk’s departure is real, because this is ground WWE would be crazy to willingly uncover.

About Last Night: You've Been Thunderstruck

“I take some sort of pride that you could argue that Royce White is the worst first-round pick ever. He’s the only one that never played a minute in the NBA that wasn’t just a foreign guy staying in Europe. It just shows we swing for the fence.”