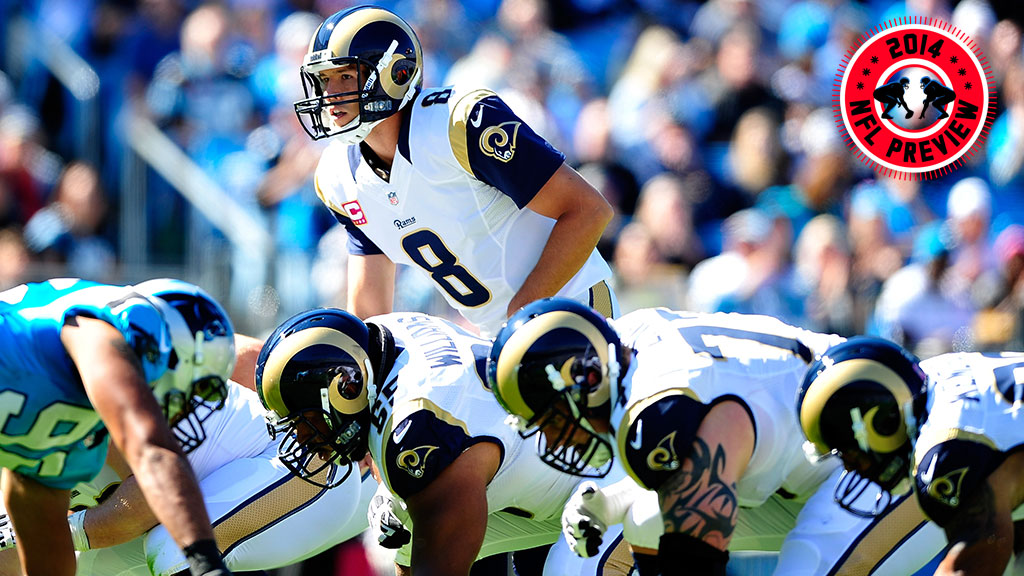 Pick your favorite place to have a gunfight in the Old West and Sam Bradford is there in its final stage. The Last Chance Corral. The Last Chance Saloon. The Last Chance Imo’s. The Rams thought they had their quarterback of the future after taking Bradford with the first pick in the 2010 draft, but after a promising rookie campaign, he and his team have been perennially frustrating. Bradford has missed 15 games over the past three seasons with various injuries, including a torn ACL he suffered halfway through the 2013 campaign. Even worse, the Rams QB has been handsomely compensated during that time, as not only the first overall pick, but no. 1 in the final draft before the harsher rookie cap was instituted. Now in the fifth year of a six-year, $78 million contract (one that will count for $17.6 million against St. Louis’s cap this year), Bradford is the owner of the the seventh-largest cap hit for any player in the NFL in 2014. Russell Wilson will make about as much this season (in terms of base salary) as Sam Bradford will by the end of the third quarter of St. Louis’s game against Minnesota in Week 1. This is suboptimal.

Here at the end of QB Crossroads Week, all of that doesn’t matter. Yes, the Bradford era hasn’t exactly gone as planned in St. Louis. That’s a sunk cost. What’s important now is figuring out whether the Rams will actually be able to get a useful season out of Bradford in 2014, because that will be the biggest factor in determining whether he gets a long-term contract extension from the Rams to remain their starting quarterback in 2015 and beyond. There will be plenty of time to write the obituary for Bradford’s time with the Rams if that’s what happens. For now, let’s put Bradford’s performance in context to see if there’s any hope of the former Oklahoma star finally having his breakout season in 2014.

Let’s start with the broader, bigger picture. Pro-Football-Reference.com has developed a stat known as Approximate Value, which estimates a player’s contributions to his team; it’s hardly perfect, but it’s useful for comparing large clumps of players over given periods of time. If you look at the Approximate Value generated by all first-round quarterbacks from 1995 to 2010 over the first four seasons of their careers, Bradford comes in tied for 18th out of 38 eligible quarterbacks. The passers most similar to him in terms of AV are Vince Young, Tim Couch, and Mark Sanchez. That doesn’t feel unreasonable in terms of broader value, even if there are drastically different styles of play within that group. There are players below Bradford on the list who enjoyed successful careers after their rookie deals, but the most obvious person among those passers was Aaron Rodgers, who recorded a small amount of AV through four seasons solely because he sat on the bench for most of his first three professional campaigns. The more appropriate comparison to other four-year starters would be Kerry Collins (21 AV to Bradford’s 28). So, fortunately, it’s not impossible to imagine that a player like Bradford could have a meaningful career after this frustrating start to his professional life.

And, in truth, Bradford’s 2013 season wasn’t really all that bad before the torn ACL. He played a weird mix of great pass defenses (Arizona, Carolina) and terrible ones (Atlanta, Dallas, Jacksonville, and Houston), but he produced what was unquestionably his best-looking seasonal line as a pro, albeit in a shortened campaign. Over seven games, he finished with a downright gaudy 14 touchdowns against just four interceptions, which was the fourth-best touchdown-to-interception ratio in the league among qualifying quarterbacks last season. He set career highs in completion percentage (60.7 percent) and passer rating (90.9) and a career low in sack rate (5.4 percent).

The problem lies with Bradford’s biggest weakness as a professional passer: the absence of his deep ball. Under Bradford’s leadership, the Rams have been a dink-and-dunk offense, throwing an endless stream of passes underneath while failing to take the top off of opposing defenses. It’s clear to see in the numbers and the tape that the Rams don’t get downfield enough, and that it limits Bradford’s value as a passer. What’s more difficult, instead, is figuring out why Bradford can’t hit that big play.

Take a look at Kirk Goldsberry’s passing chart for Bradford from the 2013 season and you’ll see what’s missing very quickly: 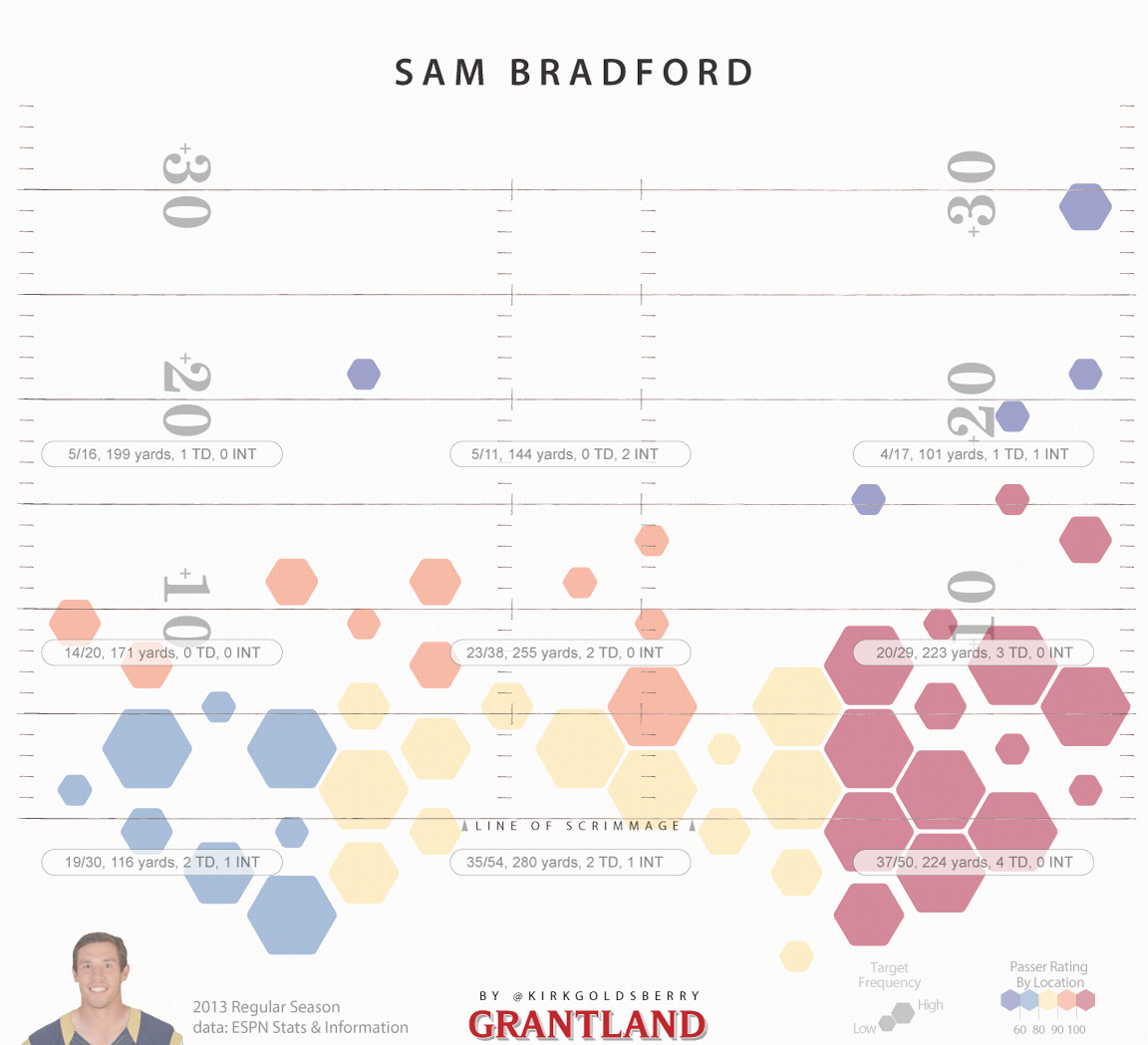 Bradford simply doesn’t throw deep. This chart reflects the numbers, which note that just 9.5 percent of his pass attempts last year traveled 20 yards or more in the air; of the 39 quarterbacks who threw at least 200 passes last season, 33 threw deep more frequently than Bradford. And when Bradford did throw deep, he was terrible; his 38.9 QBR on deep passes was 33rd in the league.1

That’s not exactly a one-year fluke with Bradford, either. Just 9.9 percent of his professional passes have gone 20 yards or more in the air since he arrived in the league in 2010. Among regular starters over that time frame, only Alex Smith, Matt Schaub, and Matt Ryan (at a league-low 8.0 percent) have been less likely to air it out. During his career, per ESPN Stats & Information, the average Bradford pass has traveled just 7.5 yards in the air. The only regular passer in that time making shorter throws is Alex Smith.2

When you’re not producing big plays as a passer, you need to be more efficient on the throws you do make to produce a similar amount of value. It’s obviously easier to complete a checkdown than it is to complete a bomb, so even as Bradford has kept his completion percentage around 60 percent during three of his four professional seasons (with the fourth an injury-riddled 2011 campaign), he hasn’t really been producing at the level of other passers in that 60 percent range. Bradford’s Pro-Football-Reference Index stats compare his rate numbers to what a league-average passer would do, with the average passer indexed at 100 for each category and numbers over 100 better than numbers under that figure. Run through Bradford’s career and you see what’s missing:

Bradford gets less out of each throw he makes than just about anybody in football; the only quarterback with 1,000 pass attempts with a worse yards-per-attempt index over the past four years is Christian Ponder. Only six players have been worse in that category since 1990, and the best player of the bunch is probably Kyle Boller. Bradford has averaged just 6.3 yards per attempt over his four-year career; the difference between his figure and the league average over that time frame during a typical full season (of 550 passes) is roughly about 522.5 yards, or 15 percent of Bradford’s output.

Most of the time, you can solve the case of the missing bombs with Occam’s razor. A passer won’t throw deep because he lacks the arm strength to throw passes reliably downfield. The NFL does an incredible job of weeding out quarterbacks with middling arm strength as they enter the league, as teams will almost always choose the QB with the big arm over the one who makes accurate passes. As a result, many of the examples of players who struggle with their deep throws are passers who suffered injuries that sapped their arm strength as their careers went along, like Chad Pennington and Peyton Manning.

Bradford’s case isn’t quite as obvious; there are all kinds of injuries and missteps along the way, but no clear smoking gun that should have sapped his velocity. Bradford did miss most of his final year at Oklahoma with a sprained throwing shoulder, which required surgery, but he subsequently wowed onlookers with his arm strength at his pro day, just four weeks after he had begun his post-surgery throwing regimen. Every pre-draft scouting report on Bradford I’ve been able to find suggests he possessed above-average or better arm strength at Oklahoma, and with the clear recovery after surgery, the Rams showed no hesitation in drafting him first overall.

Since then, Bradford has struggled with a variety of injuries, but none that should have directly affected his arm strength or ability to complete deep passes in the long term. After a healthy rookie season saw him throw 590 passes (third most in football behind Peyton Manning and Drew Brees), Bradford suffered a high ankle sprain in 2011 that brought his season spiraling down. The 2-10 Rams curiously rushed him back, which ultimately led to a disastrous start against Seattle, before shutting him down for good. Bradford was then relatively healthy again in 2012 and 2013 before suffering his torn ACL on a sideline hit by Panthers safety Mike Mitchell in Week 7 last year. Considering these factors, I don’t think his issue is a physical problem.

Could it be a mental block? That seems more likely. Bradford averaged 9.4 yards per attempt during his three seasons at Oklahoma, but that came in a variant of the spread offense that gave Bradford lots of quick throws to playmakers like Malcolm Kelly and Ryan Broyles. The Rams tried to incorporate some of those Oklahoma elements into their offense this past season under Brian Schottenheimer, but as Mike Tanier noted in his April look at Bradford’s struggles, that basically translated to a lot of five-yard crossing routes. Schottenheimer was Bradford’s third offensive coordinator and third offensive scheme in four pro seasons, with the likes of Pat Shurmur and Josh McDaniels installing their own schemes before moving on. Bradford struggled to make or even recognize deep throws in any of those schemes.

It’s harder to make the case that the Rams haven’t done enough to surround Bradford with talent. Since drafting Bradford with the first pick of the 2010 draft, the Rams have invested heavily in weapons for him at wide receiver. In fact, using the Chase Stuart Draft Value Chart, the Rams have spent more draft capital on wide receivers than anybody else in football. St. Louis has spent a first-rounder (Tavon Austin), a second-rounder (Brian Quick, using the first pick of the second round), two third-rounders (Austin Pettis, Stedman Bailey), and three fourth-rounders (Greg Salas, Mardy Gilyard, Chris Givens) on wideouts over the past four years. And that doesn’t even include the fifth-round pick they traded for Brandon Lloyd in 2011 or their heavy investments at tight end, where they spent a second-round pick on Lance Kendricks before giving downfield target Jared Cook a massive deal in free agency. Bradford’s best receiver, after all of that, was undrafted free agent Danny Amendola. Not a single one of those receivers — who fit all kinds of makes and models — have lived up to their draft expectations. St. Louis is instead giving serious consideration to the idea of starting Titans castoff Kenny Britt at wideout this season. If three coaches and nearly a dozen receivers aren’t making things better in St. Louis, at what point is it the quarterback’s fault?

It’s tempting to say Bradford is out of excuses, but it’s not entirely clear what his excuse would be at this point. The Rams used their top-five pick in this year’s draft to grab another offensive lineman, hoping that Auburn tackle Greg Robinson can eventually become the left tackle that Jason Smith failed to develop into after he was taken with the second pick of the 2009 draft. If Robinson is effective as a rookie and incumbent left tackle Jake Long recovers from a torn ACL of his own, the Rams could feature the best offensive line that Bradford’s seen since his Oklahoma days. After years of disappointment, though, I’m not sure he will be able to benefit all that much from the improved protection. Whether it was a flaw missed by the scouts or a bug that was implanted in him during his early days as the Rams starter, Bradford just seems to have a hang-up about going deep. As the Rams enter their 10th season since last making the playoffs, without noticeable improvement, I think it’ll finally be time that the organization has a hang-up about Sam Bradford.