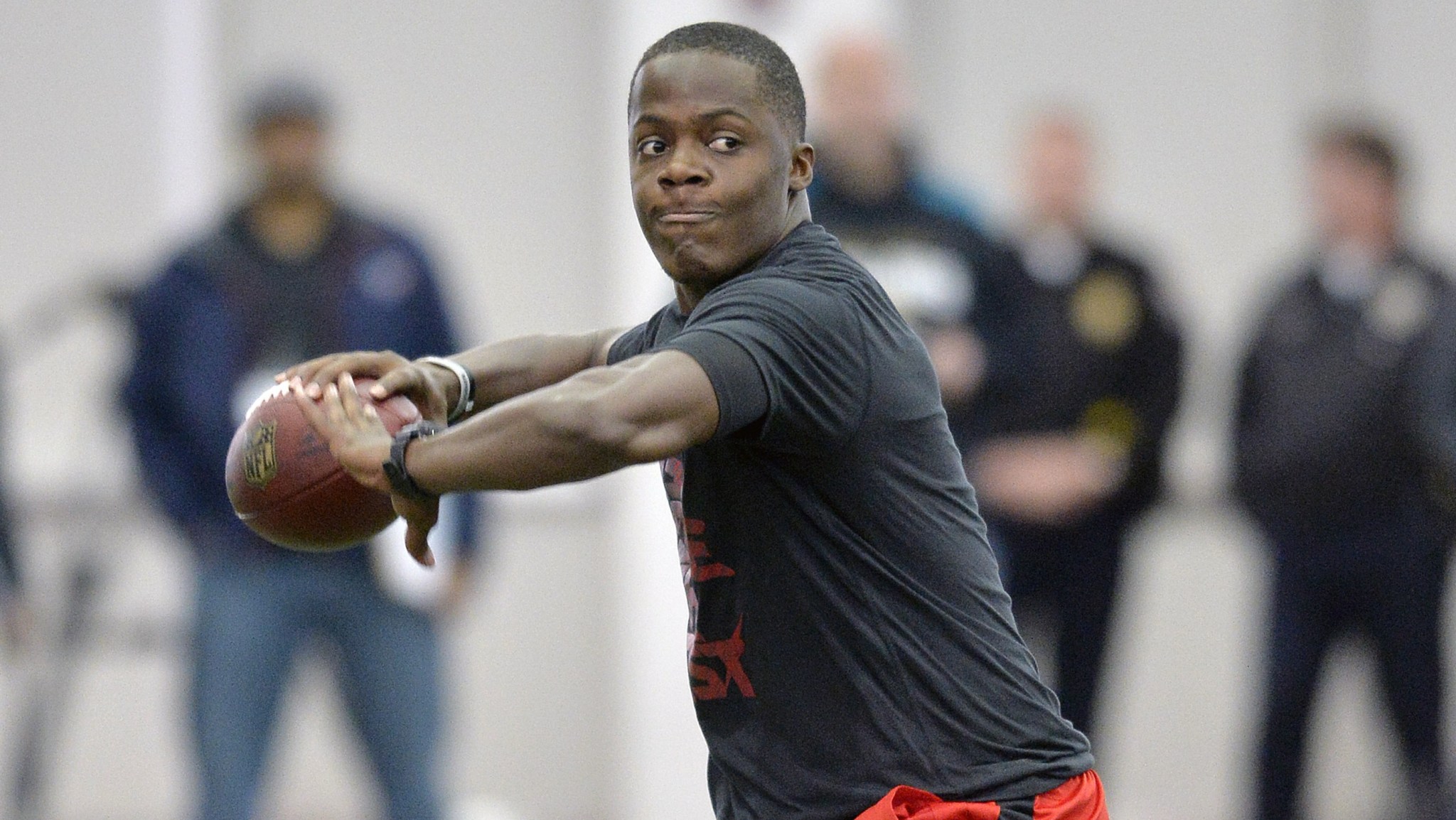 Who would have thought you could learn so much about a quarterback by simply taking the defense off the field? Last week, top quarterback prospects Teddy Bridgewater and Blake Bortles each went through their respective pro day workouts. It’s hard to imagine the two events producing a more different set of opinions. Bridgewater’s pro day was a fiasco, with the Louisville product struggling with deeper throws and managing to complete just 57 of the 65 passes he attempted.1 Bortles’s pro day, meanwhile, conjured all the right adjectives. Impressive. Solid. Bortles’s strong pitch might very well be the final piece of the puzzle he needed to rise to the top of this year’s quarterback class.

That’s no surprise. The entire pre-draft process — but most notably the pro day quarterback workout — is designed to make guys like Bortles look good while hiding the strengths of a player like Bridgewater. It plays up physical tools at the expense of actual football skills. The tools help, but you need the skills to succeed. And Bortles might very well be a better quarterback than Bridgewater when all is said and done, but I strongly doubt what happened last week gives us any reliable data on whether that’s the case.

Most elite college quarterback prospects these days opt out of the NFL scouting combine in favor of their own pro day, and it’s easy to understand why. A pro day allows a quarterback to throw in the settings and surroundings of his (and his team of handlers’) choosing. The passer can pick the receivers he’ll be throwing to and the drills he’ll run. Most important, though, each pro day is built around a scripted passing regimen customized to show off the quarterback’s respective strengths (with some marginal lip service paid to addressing his weaknesses). The quarterback can prepare for weeks to run this exact script, and since pro days occur much later than the combine, he even gets an extra month to prepare. It’s the pink slime of sports: There’s something vaguely resembling football in there, but it shouldn’t be taken as a satisfying substitute for the real thing.

Unmolested in the pocket and with no coverage to read, superior athletes are going to stand out. A passer with spectacular arm strength will have all the time he needs to loft throws downfield. Fluid, mobile quarterbacks reliably show off the footwork they’ve been drilling for weeks with ease. Players who just look like they’re quarterbacks have no better canvas for their skills than a pro day. And that’s exactly the sort of prospect Bortles appears to be. While he’s certainly not without merit, his rise up the quarterback rankings this offseason has been driven by his prototypical size and above-average arm strength. He’s seen as a raw talent that the right coach could mold into a superstar. For raw talents like JaMarcus Russell, whose workout was described by Jon Gruden at the time as “Star Wars,”2 the pro day is ice.

There is something crucial that a pro day doesn’t measure, though. (And no, it’s not heart.) More and more, when I go back through recent history and look at the first-round quarterbacks who failed to live up to expectations, I notice how frequently the problem of making accurate throws while handling a professional pass rush seems to come up. It’s not just that this isn’t tested during any of the pre-draft rituals, it’s that it’s thrown out the window and replaced with what might very well be false information. A quarterback shows effective footwork after weeks of drilling for a pro day, only to immediately lose that footwork and resort to bad habits once Aldon Smith or Robert Mathis starts bearing down on him.

Think about recently failed quarterback prospects and, chances are, you’ll come across a guy who had a good pro day and struggled to stay accurate under pressure. Russell is just one classic example. Blaine Gabbert had a wonderful pro day.3 Jake Locker was 40-for-42 versus air during his highly regarded performance. Samesies for Brandon Weeden and Mark Sanchez. Even Alex Smith wowed coaches with his transition from a spread offense during his pro day, a performance that very well might have pushed him ahead of Aaron Rodgers on the 49ers’ draft board. In each case, these quarterbacks struggled to handle professional pass rushes, leading to inaccuracy, higher sack rates, larger risks of injuries, and (considering Smith’s draft status) disappointing professional careers.

Now, guess what Bridgewater’s best skill is? Football Outsiders’ Matt Waldman noted, to nobody’s surprise, that it’s his preternatural ability to remain composed in the pocket and make accurate throws against pressure! He’s not a freak athlete by any stretch of the imagination, but Bridgewater’s feel for the position allows him to efficiently use his feet to elude pressure long enough to create a throwing lane and make an accurate pass. Bortles hasn’t consistently exhibited that skill. He might be the sort of athlete who can get himself out of trouble. Bridgewater’s the kind of quarterback who can avoid getting himself into trouble.

The rest of Bridgewater’s skills also show up in the fall as opposed to the spring. I’ve stolen the baseball pitching concepts of command and control in the past, and Bridgewater’s a great example of a passer who can do both. Not only does he have the functional accuracy to make catchable throws to his targets, he also has the veteran wherewithal and anticipation necessary to put passes in the exact spots his receivers would like them most. He makes the right reads at the line to set his protections and run the best possible play. He also reads the full field on every play.

For all that, though, his stock has slipped some during this process, a slide that will hardly be arrested by this poor pro day. His hands might be too small. He weighs only 214 pounds.4 While his arm strength on short and intermediate throws is regarded as above-average, there are questions about his accuracy on truly deep passes, the sorts of throws Joe Flacco and Matthew Stafford can make with ease. And after hearing for perpetuity that numbers are rendered useless by their inability to measure a player’s heart or intangibles, I find it interesting to see a player regarded as a superb team leader and tape junkie slip during February and March. Shouldn’t this be the time when scouts use their nuance and intuition to tease out those signs of leadership and respect? Why are they falling for arm strength instead?

Some teams will take Bridgewater’s poor pro day, see it as a sign of poor preparation, and move him down their draft boards. It’s the easy thing to do. It will take courage and conviction for a team at the top of the draft like Jacksonville or Oakland to look past Bridgewater’s bad day to draft the guy who looked like he was the best quarterback prospect on most fall Saturdays during the past two years. And even then, that team might be wrong; it may very well turn out that the process correctly reveals Bortles to be a better option than Bridgewater. But I’m very suspicious that the process isn’t asking — or answering — the questions an NFL team should be interested in.