Detroit Wrestling: There Will Be Blood 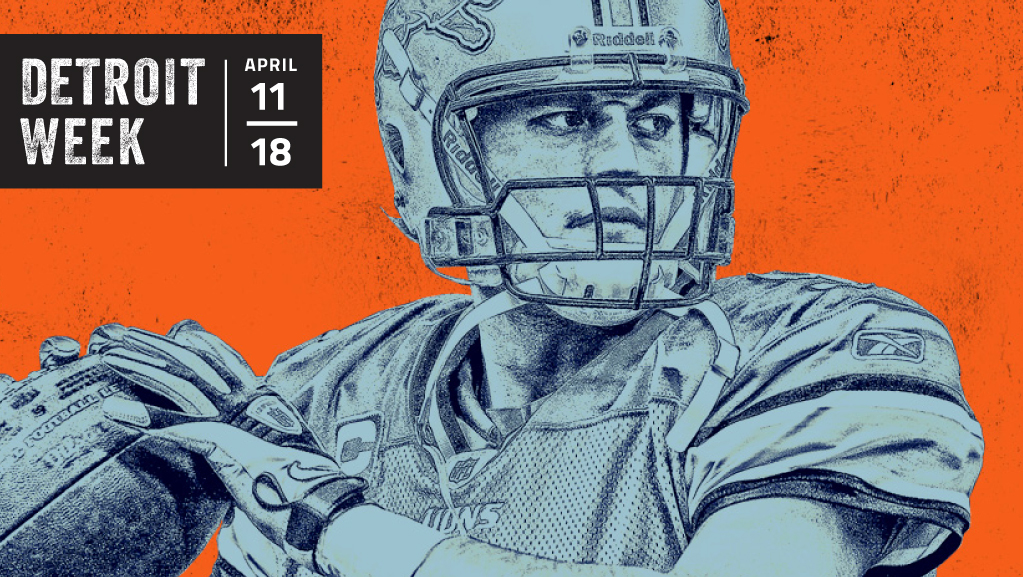 It can’t exactly be easy to root for the Detroit Lions. I have my own hang-ups surrounding that particular team, but last year was — relatively speaking, of course — pretty successful! For Detroit, 7-9 and a glimpse of life atop the NFC North qualifies as an up year, given that the Lions have exactly one playoff appearance to their name in the 21st century. They’re even on a seven-game playoff losing streak: Their last playoff win came on January 5, 1992, one day before Ndamukong Suh celebrated his fifth birthday.

That’s a brutal run. But how bad, really, has it been? Have Detroit fans been forced to suffer through the worst stretch of professional football ever witnessed?

It depends on how you define “the worst,” but you can make a pretty strong case. In terms of playoff incompetence, it’s hard to sink lower than Detroit has in the modern era. The Lions were a football dynasty during the Bobby Layne era, winning three titles between 1952 and 1957, but they’ve been wretched since dealing Layne away during the 1958 season. They’re 1-10 in playoff games since — no, that’s not a typo — having lost by an average of more than 13 points per contest. To put that in perspective: Mark Sanchez has as many playoff wins over Peyton Manning as the Lions do over all of football in the last 55 years.

Overall the Lions haven’t had much luck, either. Since the merger in 1970, Detroit has won just 40.7 percent of its games, a dismal figure edging only the Buccaneers. But the Bucs have a Super Bowl title and a pirate ship to show for their ineptitude! Detroit has nothing. Twenty-three of the league’s 26 franchises at the time of the merger have made it to a Super Bowl at least once during the ensuing 43 years. Only the Lions, Chiefs, and Jets have failed to make it back to the big game.1

That’s not to say the Lions have had zero positive seasons. They did have a run of relative success during the ’90s, when they made the playoffs six times across a nine-year stretch, but since the 21st century arrived, it hasn’t been good. To put it into a neat package, let’s look at the past 15 years and ask this question: Is this the worst run of football the NFL has ever seen? I went back and calculated rolling 15-year win percentages for every team in games played since the merger. Sorry to long-suffering Minneapolis Red Jackets fans; your pain lives on with the Vikings.

The 1999-2013 Lions aren’t the worst team over a 15-year stretch in league history, but they’re awful close. There are several consecutive 15-year stretches for the Lions that would come close to qualifying as such, with the worst of those runs being from 1996 to 2010. Those Lions teams — despite an MVP season from Barry Sanders in 1997 — won just 31.3 percent of their games. That’s equivalent to a 5-11 season … for 15 consecutive years.

Several other franchises also had the same sort of rolling mediocrity over 15-year stretches, of course. So let’s celebrate their terribleness, shall we?! In order of their winning percentages at their absolute nadirs, here are the five worst franchises of the modern NFL era:

5. 1989-2003 Cincinnati Bengals, .333 winning percentage. In January of 1989, the Bengals held a three-point lead over the 49ers in Super Bowl XXIII with three minutes to go, only for Joe Montana to drive the 49ers 92 yards for a game-winning score. That concluded the 1988 campaign, and the franchise never really recovered. Cincinnati went 8-8 the following year and then 9-7, winning a playoff game before losing to the Raiders in the divisional round. The Bengals proceeded to miss the playoffs for 14 consecutive seasons without as much as a single winning campaign along the way. As much as Cincinnati fans might be sick of losing in the divisional round, things used to be a lot worse.

4. 1999-2013 Cleveland Browns, .321 winning percentage. The second edition of the Cleveland Browns just finished its 15th season in the NFL, and thanks to the horrors of expansion and the joys of rebuilding, they’ve managed to produce a historically notable record of futility. That .321 winning percentage over the past 15 years is tied with, of course, your Detroit Lions as the worst in the NFL.

It’s probably been less fun to be a Browns fan over that time frame, too. The Lions have had Calvin Johnson; Cleveland had that one year where Braylon Edwards looked great, Josh Gordon’s 2013 season, and the time Jerome Harrison ran for 286 yards and three touchdowns against Kansas City. The Browns’ one playoff appearance came all the way back in 2002, when Butch Davis coaxed Tim Couch into a 9-7 season before Couch broke his leg in Week 17, only for Kelly Holcomb to nearly pull off an upset victory in the wild-card round over Pittsburgh.

Is Kelly Holcomb the best quarterback in Browns 2.0 history? Is it even really close?

3. 1996-2010 Detroit Lions, .313 winning percentage. This, of course, cuts out just before the 2011 Lions started 5-0 en route to a 10-6 season, which might be the best post-merger season this franchise has seen other than its 1991 team. It’s an era that began with firing Wayne Fontes and then enjoying Barry Sanders’s incredible MVP season in 1997 (2,053 rushing yards and 11 rushing touchdowns) before Sanders retired in 1999. Even that wasn’t enough to force the Lions down into the doldrums; they went 8-8 the year after Sanders retired, which was enough to make the NFC playoffs, but starting quarterback Gus Frerotte’s tearful return to Washington ended with the Lions getting blown out. The Lions even went 9-7 the following year, but with head coach Bobby Ross resigning midseason, the rudderless franchise turned to Matt Millen to rebuild the team.

Millen took over a 9-7 team and immediately saw the Lions go 2-14. It was an omen. During Millen’s eight years at the helm, the Lions were a staggering 31-81, winning just 27.7 percent of their games. That’s the worst eight-year stretch since the merger. Expansion teams were better. Tanking teams were better. Even the Browns with that list of quarterbacks have been better than the Millen-era Lions were. If this article were being written in 2009, Lions fans would have been able to peek through their paper bags and proudly say that they’d sat through the least successful football team in league history. But the longer time frame and their success in the late ’90s (and relative success recently) leaves the recent Lions just short of worst-franchise-ever honors.

2. 1970-1984 New Orleans Saints, .310 winning percentage. The Saints were already three years into their existence when this stretch started, but their record of futility might put Detroit’s to shame. The Saints played 33 NFL seasons during the 20th century. They won exactly zero playoff games during that stretch. They failed to make the playoffs in each of their first 20 seasons before finally making it four times in a six-year stretch under Jim E. Mora, who was unquestionably the best coach in team history before Sean Payton rolled up. Put it this way: Mora and Payton have combined to win more games (172) in their 18 years at the helm than the team’s other 13 head coaches have in their 28 combined campaigns (152).

The truly scary thing is that the Saints actually had a pretty good starting quarterback for a chunk of that run: Archie Manning. It didn’t help. Manning was perpetually throwing to catch up during the first half of his career, and by the time he got good, his defense was brutal. During Manning’s final five years with the team, the Saints finished in the bottom six in scoring defense four times. They didn’t have a team that finished in the top half of the league in both scoring offense and scoring defense until 1987.

1. 1982-1996 Tampa Bay Buccaneers, .297 winning percentage. Want to know how bad the Buccaneers were before Tony Dungy showed up? They had five different 15-year periods with winning percentages worse than that .313 figure the Lions and Saints put up. In this particularly brutal run, the Buccaneers made the playoffs just once, and it was in the very first year, when they went 5-4 during the strike season of 1982. Not only did they fail to make the playoffs in each of the ensuing 14 seasons, the Buccaneers were unable to muster even a single season with a .500 record, finishing 6-10 or worse in 13 of those 14 campaigns.

A bad NFL team might hope to improve by picking high in the draft. The Buccaneers laughed at such frivolity. They dealt their 1984 first-round pick away for busted quarterback Jack Thompson, whom they cut two years later. The pick they traded became the first overall selection (Irving Fryar). In 1990, they dealt their 1992 first-rounder to the Colts for Chris Chandler; by the time the Colts actually used the pick, which had become the second overall selection (Quentin Coryatt), Chandler was a Phoenix Cardinal, having been cut by the Bucs after 13 games. Even more staggeringly, in 1986 the Bucs used the no. 1 overall pick on Bo Jackson, who had announced before the draft that he would refuseto sign with the team. Tampa Bay lost his rights without acquiring anything in return. I suddenly have a newfound appreciation for the Greg Schiano era.

If there’s anything Detroit and Cleveland can look toward with a glimmer of hope, it’s that the other teams on this list came out of their respective funks after regime changes brought them each a quality head coach. The Bengals hired Marvin Lewis, the Bucs hired Tony Dungy, and the Saints brought in Jim E. Mora. Now the Lions are bringing on Jim Caldwell, while the Browns — who have been trying to make this new coach thing work on an annual basis — have hired Mike Pettine. In either case, Detroit fans haven’t had to deal with the worst team in league history over the past 15 years. But it’s been pretty darned close.