History Has Been Maimed 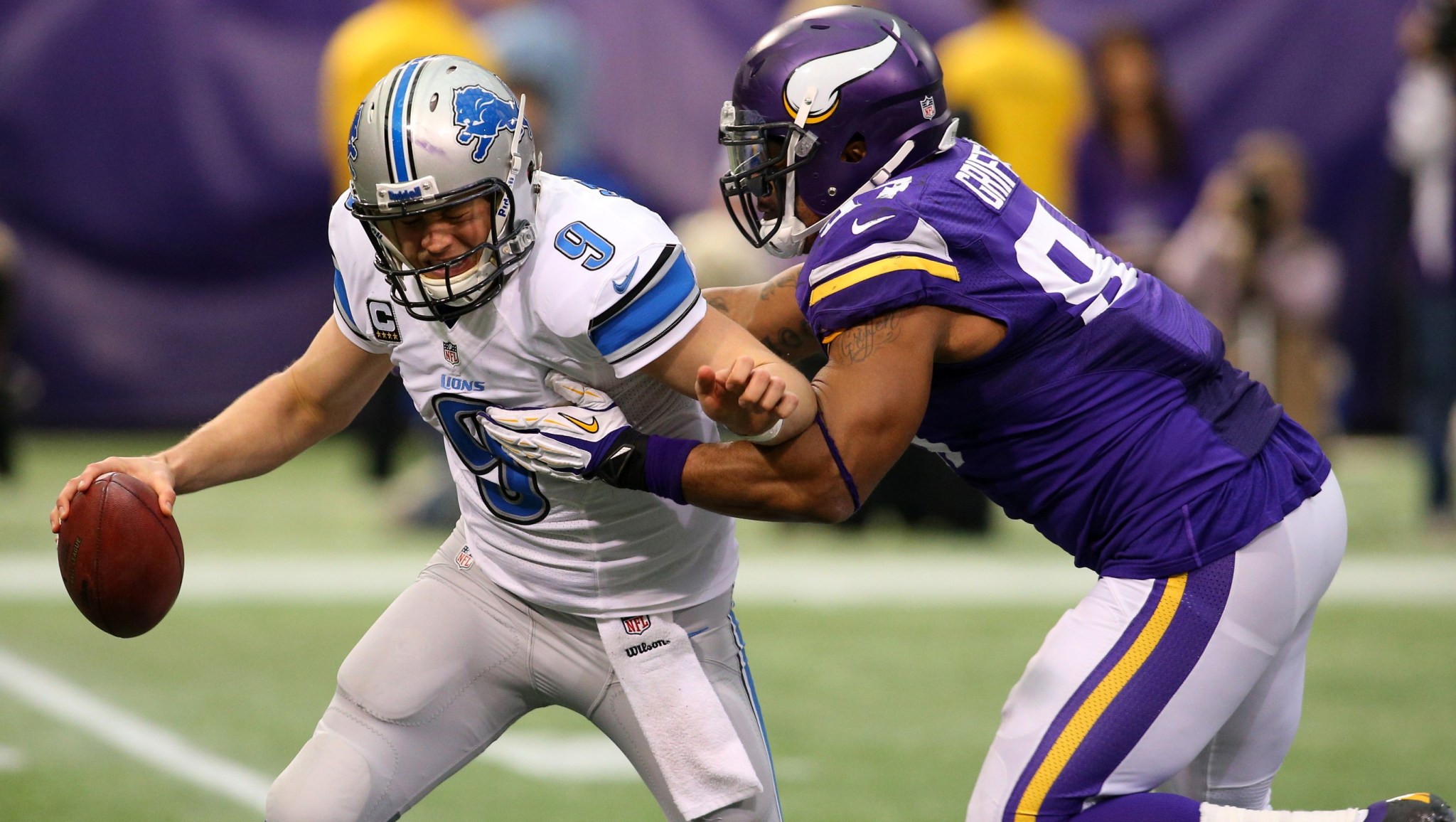 Those damn Detroit Lions. As I look back at my 2013 preseason bets, all I can think about is how the Lions snatched defeat from the jaws of victory. Sure, the second-half collapse that resulted in the firing of head coach Jim Schwartz probably didn’t feel very good for the players in that locker room. But more important, it cost me money! Sadly, the Lions were the difference between what would have likely been a small profit in 2013 and, as it turned out, a modest loss.

Let’s run through those bets and see how they turned out. For the uninitiated, before every football season, I head to Vegas (or, distressingly, move to Vegas) and place futures bets on the NFL season. In the interest of full disclosure — and column ideas during relatively quiet parts of the year — I document the bets both before and after the campaign. You can see the majority of my bets here. That excludes two bets I had made earlier in the year and forgot to include, which I referenced in this September 8 tweet. They were both losers. And hey, speaking of, let’s run team-by-team and start with some beautiful moneymaking ideas I had that do not look so great in hindsight!

Oh, you know, the Broncos just started 6-0, won 13 games, and probably locked up a playoff spot sometime in late September. This bet would have been the correct call if the Broncos’ chances of missing the playoffs had been greater than 13 percent. That seems laughable a year later. This would have taken a lot of Brock Osweiler.

In all, that’s $295 down the drain on Schianomania. Robert Mays and I were both extremely high on the Bucs this year, but it (obviously) didn’t work out. The rushing offense never got going. Darrelle Revis wasn’t 100 percent right. Dashon Goldson was a disappointment. Staph ran through the locker room. Josh Freeman Freemaned all over the place before being benched and released. All the while, Greg Schiano wondered What would Bill Belichick do? and tried to figure out why the league’s computer system wouldn’t let him cut Hank Poteat. Mays will be back on the bandwagon this year, as the Bucs have turned into Chicago South with Josh McCown and Lovie Smith in town. I might need a year off. Could something that makes me look like I have any idea how this football stuff works please show up in this column sometime soon?

OK, that’s better. The preseason Chiefs fit a number of classic taking-the-leap criteria: They upgraded from sub–replacement level to league-average at head coach and quarterback, had a massively unlucky turnover differential the year before (minus-24, tied for worst in the league), and were likely to play an easier schedule. They bounced all the way to a plus-18 turnover differential (second in the league) and won their first nine games, locking up that over/under bet before Halloween. And who knows what would have happened if they held on to that 28-point second-half lead against the Colts in the wild-card round?

Oh, they eventually get blown out by the Broncos in Denver? Yeah, fair enough.

One of the more obvious statistical candidates to decline in recent memory, the Colts went 5-1 in games decided by one touchdown or less and overcame the addition of Trent Richardson to coast to another 11-5 season and the AFC South crown. A positive point differential and a better performance against a tougher schedule means that last year’s Colts were probably a better team than the previous edition, but the numbers would still suggest that Indy will be likely to decline by a game or two next year. You’ll forgive me if the idea of betting against Andrew Luck again — who is now 15-2, including the playoffs, in one-score games — doesn’t sound like all that much fun.

Hey, the Eagles did that! In hindsight, it seems surprising that these odds were so long, given that this division perennially seems to be decided by the Cowboys losing the NFC East to whichever team they play in Week 17.

This one turned out to be a winner, but who on earth would have thought the Falcons would go 4-12? You know how I mentioned Andrew Luck’s record in one-touchdown games? Matt Ryan was 28-12 (including playoffs) in those contests through the first five seasons of his career. The Falcons started the 2013 season with five games that were decided by one score or less … and lost four of them, finishing 3-7 in those close ones by the time the season was over. Fear not, Falcons fans. Atlanta will be back.

The Jaguars were, along with the Lions, the team that very nearly ensured me a 2013 profit. After an ugly start, Jacksonville won four out of five games and were 4-9 with two winnable home games against the Bills and Titans on the way. Sure enough, Chad Henne threw an interception in the end zone deep in the fourth quarter to lose to Buffalo before the Jags blew an 83 percent win expectancy in the second half against Tennessee.

It’s not like losing even helped the Jaguars much; their final win of the year came against Houston, which was enough to gift the Texans the top pick in this year’s draft. Jacksonville did the same thing in 2011, winning in Week 17 to ensure the Colts ended up with the top spot and Andrew Luck. Would it really be that crazy to imagine the Jags helping Tennessee into the first overall slot this year?

After beating the Bears in Week 10, the Lions were 6-3 with Pittsburgh and Tampa Bay to come before a Thanksgiving game against the Packers, who had just lost Aaron Rodgers to a broken collarbone. They lost both those tune-ups and nearly threw the game away early against Green Bay, leaving the Lions at 7-5, 1.5 games ahead of the Packers and a game ahead of the Bears with all the tiebreakers in their favor. The NFC North was theirs for the taking, and with it, an almost sure win of both these bets.

Back-to-back losses cost the Lions control of their own destiny, but they could have regained it when the Bears and Packers both lost in Week 16 … only for Matthew Stafford to throw a pick-six with 5:06 left before the Lions allowed the Giants to convert a fourth-and-7 in overtime and eventually prevail 23-20. Then, with their playoff flame extinguished, they sat Calvin Johnson against the Vikings in Week 17 and still managed to get a 13-7 lead in the fourth, only for a long punt return to set up a Cordarrelle Patterson touchdown catch.

If the Lions win one of those four games instead of blowing fourth-quarter leads each time, the over bet pushes at eight wins, which is enough to make it a profitable year. If they win two of those games, they win the NFC North, which — even if the Eagles then don’t win the NFC East — is enough to push the profits into the 15 percent range. Of course, they’re the Lions, so while they did improve by three wins over their previous season’s performance, marginal competence with any glimmer of glory on the line was too much to ask for.

Oakland’s playoff chances were always going to be remote, but it did threaten the 5.5-win figure by starting 3-4, including a victory in the midnight ET game against the Chargers during Week 5. Terrelle Pryor looked impressive during that stretch, but he quickly turned into a pumpkin, and a defense full of veterans on one-year contracts quit shortly thereafter. The Raiders managed to beat the Texans to get to four wins, but Matt McGloin lost his five other starts as Oakland fell well short of the number needed to turn that bet into a loser.

The Rams seemed out of it at 3-6 with Kellen Clemens at the helm, but consecutive blowouts of the Colts and Bears got them to 5-6, and after losses to the 49ers and Cardinals, a pair of wins against New Orleans and Tampa Bay gave the 7-8 Rams a shot to make it back to .500. Unfortunately, that shot came in Seattle against the Seahawks. You know how that story goes.

The Steelers rebounded after a brutal 2-6 start, but even a 6-2 finish was only enough to get them back to .500, leaving them nowhere near the 10 wins required to hit that over. They deserved to make the playoffs, but a pair of bad calls in the Chargers-Chiefs game in Week 17 gave the Chargers a narrow win and the final playoff spot in the AFC. If the league does expand to seven playoff teams per conference as rumored, Steelers fans will be bitter that the shift didn’t happen earlier; under the proposed rules, the Steelers would have made the playoffs as the seventh-best team in the AFC in both 2012 and 2013.

It’s a lot harder for a team to win when it doesn’t get one of the best seasons a halfback has ever had — and when it signs Josh Freeman off the street and sticks him in the starting lineup 14 days later. But hey, at least the Vikings banded together to come up with that victory over the Lions! Gambling is so … sigh.

In the end, the difference between a tiny profit and a small loss came down to a 61-yard field goal. I can deal with that. Just don’t let me bet on the Lions again next year.