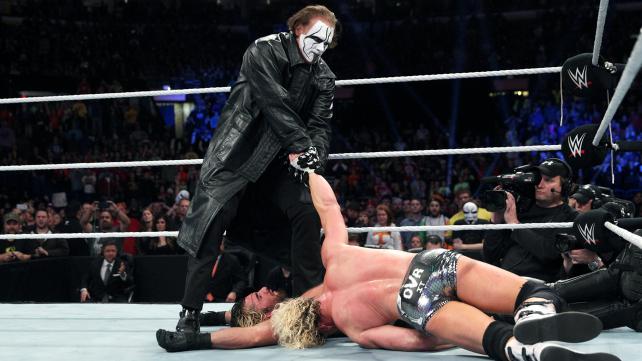 Sunday night in St. Louis, the Authority — the nefarious onscreen embodiment of the real-life WWE power structure — was in a tough spot. Triple H and his wife, Stephanie McMahon, had been running Monday-night Raw with two iron fists, yet their attempts to suppress the wrestling public’s will were often unsuccessful. Last year, the Authority failed to block Daniel Bryan’s rise to the WWE Championship; more recently, the Authority has directed its wrath toward John Cena, whose only crime was his lack of allegiance to them. Even if they didn’t win every power struggle, however, the Authority’s dominance felt secure. After all, they’re in charge, and pro wrestling abhors a power vacuum. And so Sunday’s Survivor Series would be headlined by Team Authority — a murderer’s row of thick-necked baddies — versus Cena and his squad of thick-necked do-gooders. The outcome of the match felt unimportant; the Authority wasn’t going anywhere, and neither was Cena.

Then things got interesting: Vince McMahon emerged two weeks ago from the front-office ether to declare that if the Authority lost, they would be removed from power.1 Vince’s act seemed to augur an Authority loss, a possibility that felt even more likely after Triple H promised to fire all the non-Cena members of Team Cena if the Authority won at Survivor Series. The outcome still seemed obvious, but suddenly the match had stakes.

They say art imitates life, and this was no exception: On the same night that the Authority were fighting for their jobs, WWE was — in real life — pulling out all the stops to convince viewers to subscribe to the WWE Network. After a disappointing first year for the network, WWE decided to make the service available for free for the month of November, which included Survivor Series. WWE has been adamant in its projections for the network’s long-term health, even in the face of its early shortfalls, but the volume of WWE’s pleas to subscribe began to feel like Stephanie’s teary-eyed backstage pep talk to Team Authority during Sunday’s show: “You can’t let us down! You can’t lose! You can’t lose!” Triple H backed her up: “We cannot lose. … You fight tonight like everything you’ve worked your whole life for is on the line.” With a bunch of extra eyes on Survivor Series, WWE had to make an impression or risk seeing its vaunted new business model fizzle under its outsize expectations, like a heavily hyped new wrestler who can’t get the crowd behind him.

If it wasn’t a surprise that Team Authority lost — they did — at least how they lost was interesting. Despite WWE’s long history of disdain for the stars of other companies that WWE has acquired over the years, the company decided to raise the stakes by summoning the Ghost of Wrestling Past: Sting, the legendary WCW star who many thought would never appear in a WWE ring.

Sting was a mainstay of WCW when the rival company tangled with the WWF in a 1990s blood feud for ratings. Most of the biggest WCW stars didn’t come to WWF when McMahon bought out his rivals in 2001. That’s because the biggest stars were under contract with WCW’s parent company, AOL/Time-Warner, and McMahon had no interest in paying their exorbitant salaries. Likewise, the wrestlers weren’t inclined to quit and lose the remaining money on their contracts so they could join the WWF. Eventually, as their contracts ended, most of WCW’s big names turned up for a run in WWE. By then, McMahon owned a functional monopoly on big-time professional wrestling, and performers like Kevin Nash and Ric Flair and Goldberg were happy to make nice with WWE and put their legacies in Vince’s powerful hands.

The exception was Sting. As his onetime compatriots popped up in WWE one after another, Sting became the anchor of TNA Wrestling — the closest thing to competition WWE has had since the end of WCW. Sting’s TNA tenure wasn’t quite embarrassing, but it served as a weekly reminder that one of the biggest stars in pro wrestling wasn’t fulfilling his potential. Fans online spent more time fantasy booking his eventual WWE arrival than following his TNA matches. Every time his contract expired, Sting would tease a move to WWE, but it never seemed to work out. He had some good moments in TNA, but in terms of continuing his legacy in mainstream wrestling mythology — the history of the sport, over which WWE holds unilateral sway — it was a lost decade.2

Sting negotiated with Vince at least once, 18 months after WCW shut down, but nothing came of it. Sting explained what happened in a Q&A with Grantland earlier this year: “I had a conversation with Vince. Long story short, when I spoke with Vince it was great, then when the attorneys got involved it wasn’t so great. It never materialized. I let it go at that point.” But Sting’s version of the story has changed over the years. When he was employed by TNA, Sting said he saw how other WCW standouts had been forced into subordinate roles in WWE. Part of the reason it took Sting so long to join WWE seemed to be that he wanted to protect his legacy. “I didn’t trust how I would be used,” he said.

The irony, of course, is that despite being WCW’s (and TNA’s) standard bearer, Sting was always the most WWF wrestler in WCW, which spent years as the gritty and old-school alternative to the glitzy excess of WWF. With his neon face paint, bleached flat-top, and indelible coolness, Sting would have been the perfect fit for WWF — the platonic ideal of a Vince McMahon creation, even though his character and look had developed outside of McMahon’s influence. And when Sting morphed into a dark, Crow-esque avenging angel, he felt like something straight out of the Attitude Era, dropped from the rafters to wreak havoc on WCW. If Sting had been in the WWF, so much might have been different. He could have been the Ultimate Warrior with a good attitude and functionality in the ring. He could have actually pushed Hulk Hogan out of the main event spotlight. He could have ended the Monday Night Wars before they started. We could spend all day going over all the mind-blowing what-ifs regarding Sting’s career, but after a decade in functional exile, what matters is that he’s finally where he belongs — on the biggest wrestling stage there is.

The irony of all this is that during one of WWE’s greatest moments of need, it has turned to Sting to save the day. It’s a canny move: WWE has tried tirelessly to get its regular viewers to subscribe to the Network, but for the business plan to work, WWE needs more than hard-core wrestling fans to sign up. It needs to reach the casual fans of the Monday Night Wars Era, many of whom have stopped following wrestling. Trotting out Sting is as good a way as any to lure those fans into today’s WWE. (Well, that and sending Hulk Hogan to NBA games.) Stephanie McMahon couldn’t help but state the obvious when she was lamenting her removal from power on Raw the Monday after Survivor Series. “Team Authority would have won too,” she said, “if it weren’t for one man … one man who changed the course of wrestling forever.”

Well, maybe. What’s certain is that Sting is finally in the WWE ring — a freshman at the age of 55. What that means for WWE (and the WWE Network) remains to be seen. It must be said that much of Sunday existed less as a showcase of the best of the current WWE product and more as a commercial for an optimistic future. Bray Wyatt–Dean Ambrose basically amounted to a 10-minute commercial for next month’s Tables, Ladders, and Chairs PPV, the twofer of women’s matches was basically just extended product placement for Season 3 of Total Divas, and Sting–Triple H will probably be built up over the next six months, all the way to WrestleMania. Roman Reigns — presumably still WWE’s next big thing, despite being injured, got interviewed in a semi-main-event slot.3 And the unequivocal star of Sunday’s main event — after Sting — was eternal up-and-comer Dolph Ziggler. Wrestling pushes are sort of like the legal definition of pornography. They’re hard to specify, but you know ’em when you see ’em. If Cena’s awkward attempts to siphon Dolph’s mojo on Monday night were any indication, this is a real push for a deserving performer.4

And, finally, also in the category of Things To Look Forward To, Survivor Series hinted at the one unattainable dream of every wrestling fan: Cena’s eventual heel turn. Thanks to Vince’s contractual machinations (and ever oblique motivations), the only person with the power to return the Authority to power is John Cena. It was good for a punch line on Sunday, but the foreboding endgame is clear. Every stipulation in wrestling is a Chekhov’s gun. By describing the terms of the Authority’s return to power, Vince guaranteed it. And any scenario that sees Cena aligning with the Authority will likely involve his realization that he must embrace his dark side to stay at the top of his game. (Or, heaven forbid, Triple H recognizing Cena’s heroism after their feud and Cena deciding to take pity on the former showrunner. You’re right — that’s probably more likely.)

Whether or not Cena ever turns heel, WWE storytelling is certainly shifting toward a grayer palette than its traditionally bright extremes of good and evil, and that’s a good thing. Heroes like Ambrose and Ziggler and Ryback point to a more complicated future — a future that sounds a bit like a time in the not-too-distant past when heroes wore black leather trench coats and carried baseball bats.

Whatever nostalgia Sting evokes for fans like me, it remains to be seen what impact he’ll have on younger fans who only know him from YouTube, the WWE Network, and video games — if at all. The crowd’s enthusiastic response to Sting at Survivor Series was encouraging, but it’s hard to tell how many fans were excited for Sting and how many were just cheering the idea of a surprise. If this sends younger fans back to the Network to delve into Sting’s history, it could be a masterstroke, but if it’s just a Band-Aid of hype applied to a night in need of pizzazz, it could backfire. Let’s hope that’s not the case.

Maybe bringing Sting out on Sunday was a move of desperation. But WWE has always been at its best with its back against the wall. This is the sort of desperation that has led WWE and Vince McMahon to make good decisions in the past — like during the Monday Night Wars, when they were going head-to-head with a competing show starring a dude called Sting. Back then, McMahon turned a moment of crisis into one of the greatest business victories in WWE history. Can he do it again?

What’s Next for RG3? Breaking Down 10 Possible Destinations