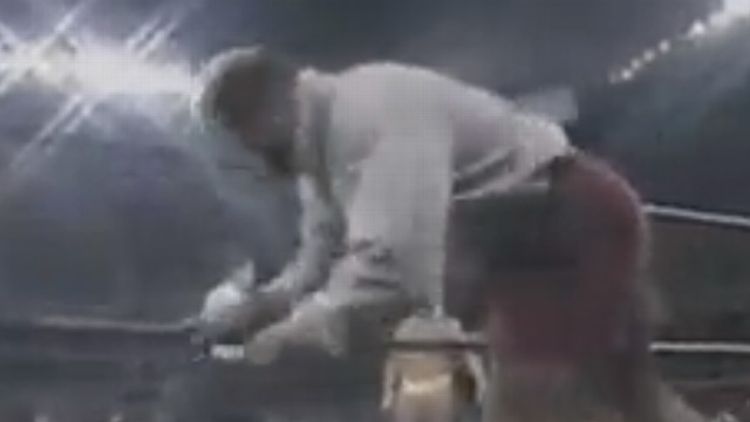 It’s SuperBrawl VI, on February 11, 1996, and color commentator Dusty Rhodes is giddy with anticipation. “This right here is loaded and will be outta hand, my friends,” he said. “The Taskmaster” Kevin Sullivan is already in the ring as the lights come up. His opponent, Brian Pillman, eschews a fancy entrance and just sprints down the aisle and jumps headfirst into a brawl with Sullivan. If it feels more like a run-in than a real match, well, just get ready for the bombshell that’s coming.

It’s a strap match, meaning the two men are to be strapped together at the wrist with a length of leather — with which, of course, they’ll be allowed to whip and choke each other — coupled with a unique “I Respect You” stipulation, meaning that the match can only end when one man formally states his respect for the other. (The referee is equipped with a microphone to document the moment.) Sullivan — an old-school villain who had waffled over the course of his career from Satan worshipper to varsity wrestler and back — was feuding with Pillman — formerly bland babyface “Flyin” Brian Pillman, he was now minus the nickname and a member of a reconstituted Four Horsemen stable — because Sullivan thought that Pillman wasn’t showing proper respect for the business. Frankly, he wasn’t — over the preceding months he had been developing a new “loose cannon” persona that was antiestablishment before antiestablishment in wrestling was cool, and even his Horsemen compatriots often seemed uneasy with his antics. (Ditto for the entire backstage cohort. Pillman’s character was largely indistinguishable from his real self, and his behavior rankled many.)

Sullivan, who was the backstage booker — or head writer — had a penchant for putting himself into this sort of gritty, realistic beef (when he wasn’t summoning demonic forces from the depths). But when the two men collide in the ring that night, there’s a feeling that this is something slightly different. Pillman and Sullivan brawl with such realism — and, seemingly, with such disregard for the script — that the announcers (Rhodes, co-color man Bobby “The Brain” Heenan, and straight man Tony Schiavone), normally a talkative bunch, are left to joke around and posit odd questions about how they’ll ever get the straps attached.

Less than a minute into the match, the men finally get some separation. Sullivan recoils less from Pillman’s imaginary punches than from being thoroughly exhausted by an unscripted scramble. Pillman goes right for the referee, who’s obviously not expecting him, takes the mic, and turns toward Sullivan: “I respect you, booker man.”

These are the five words (or four, depending on whether you conjoin the latter two) that changed pro wrestling, sort of. Of course, at the time it just seemed bizarre. The fans react with a stunned hush — they can’t believe the match is over — and the announcers don’t fare much better. Schiavone restates what happened with what feels like legitimate shock: “He said ‘I respect you’ and he walked out!”

Noticeably omitted from Schiavone’s recap [?] were those last two words — “booker man” — the words that were not to be spoken out loud in front of an audience, a direct admission that Sullivan was the backstage shot-caller. But Schiavone tries to keep up appearances. “For about 45 seconds we had the darndest fight we’d ever seen,” he crows. Sullivan, eyes pinched and reeling, exposed in the ring even more than he was already in his briefs, looks like Epimetheus must have when Pandora threw open her box. There are some things you just can’t take back. “You wouldn’t believe it by looking at him,” Schiavone noted, “but that’s the face of a victor.”

Shortly thereafter, Arn Anderson — Pillman’s fellow Horseman — stomps down the aisle in a long-sleeve button-down shirt, shorts, and hiking boots. The announcers note that he wasn’t even on the card that night, that he’d been playing golf that day, and, judging by his outfit, it’s obvious he wasn’t planning on being onscreen that night. The match restarts awkwardly with Anderson in Pillman’s place, pausing only momentarily for Double A to unbutton his top. Anderson and Sullivan whip and choke each other around the ring for several minutes until head Horseman Ric Flair comes into the ring, stops the fight, and bewitches them both in a villainous kumbaya, reminding them of their shared interests in ridding the company of Hulk Hogan and Randy Savage. Anderson says some kind words to Sullivan to seal the pact, but Sullivan just stands in silence — still reeling, one presumes, from the Pillman incident.

And that’s how it would be known thereafter — “The Pillman Incident.” At least until Pillman incidents started piling up to the point that they needed differentiation (then it became “The Booker Man Incident”). If Pillman’s entrance felt like a run-in, his exit was reality coming out from under the ring and hitting Sullivan with a steel chair.

So what happened? Well, WCW was being run by a young gun named Eric Bischoff, who had used Ted Turner’s money to steal Hogan and Savage from rival WWF, and who was frothing for a chance to further shake up the status quo. Bischoff would eventually find his calling in the nWo, but for now he had his muse in Pillman and his unhinged persona. It wasn’t the first time Pillman had gone off the rails: The month before, at Clash of the Champions, he grabbed Heenan (who had had several neck surgeries) from behind by the collar, causing Heenan to shout “What the fuck are you doing?” live on the air.

Together, Pillman and Bischoff mapped out a plan by which Pillman would break the fourth wall and get himself fired, only to return sometime later as the conquering hero of postmodern wrestling. The Booker Man Incident was the flash point; it gave Bischoff reason to “fire” Pillman. But more than that, it was a beautiful singular moment in which pro wrestling’s innocence was recaptured. As Bischoff later would put it: “For a brief moment, that audience was watching Brian Pillman and said to themselves, I know all the rest of that stuff is all make-believe, but Brian Pillman really hates Kevin Sullivan.”

I used those quotes around “fired” in the preceding paragraph with some trepidation. Because although the Internet wrestling community was by this point in its infancy, rumormongering had been a going concern for promoters since Xeroxed Samizdat newsletters started making their way into the mailboxes of ur-smarks two decades prior. So, Bischoff and Pillman decided that in order to make Pillman’s firing seem legitimate to keen-eyed observers, he had to actually be fired. And, almost incredibly, nobody else in WCW could know what was going on, lest backstage dirt make it out into the open. Even the booker man was left in the dark: When Sullivan was recoiling, galled at Pillman, that wasn’t an act. When Anderson hopped off his folding chair in the back and came out to salvage the angle, that wasn’t an act. They were in the dark just like the fans were. Rewatching it, it’s clear that he was fulfilling Pillman’s planned role, and that the post-match bit with Flair was always the plan — except that Pillman was meant to be in the Anderson role. When Arn hustled to the ring, he thought he was saving the match; in truth, he was playing a part in a free-form thought experiment.

Once free from his contract, Pillman showed up in ECW, insulted the fans, threatened to piss in the ring, and attacked a planted “fan” with a fork — all an extension of the same persona he was developing in WCW. (He called ECW front man Paul Heyman “booker man” just to drive the point home.) Eventually he went totally off-script, signing a contract with the WWF. The motivations here get blurry — either this was Pillman’s underhanded plan all along, or Bischoff dropped the ball. If you want to believe Bischoff, it’s the former. “I’m not sure if he was working me,” he later said, “or if we were working everybody else.” This might be the first ever instance of a Triple-Decker Shoot: Pillman shooting on Sullivan, Pillman and Bischoff shooting on the rest of WCW, and Pillman shooting on Bischoff.

Before he inked his WWF deal, Pillman was in a car accident that destroyed his ankle, but WWF was in such need of dynamic talent that they signed him anyway, to the first guaranteed deal in WWF history. He continued his “Loose Cannon” persona — now the moniker was officially ensconced in his ring entrance graphics — by doing things like hobbling around on crutches and pulling a gun on “Stone Cold” Steve Austin. A little over a year after he started with the WWF, on October 5, 1997, he didn’t show up at a pay-per-view event in Minnesota, and was eventually found dead in his hotel room. By then, the Attitude Era was in full swing in the WWF and the nWo had swept through WCW. Reality as it had long been understood in pro wrestling was being dismantled on a weekly basis, so it’s easy to let the Booker Man Incident blur into the miasma of fourth-wall battery that followed. But it wasn’t just another shoot in an era full of them: It was the parting shot. Attitude and the nWo — Pillman was the mainstream harbinger for this brave new world.

The words “booker man” were cut from the video release of SuperBrawl VI. Some things are so real that they don’t even fit comfortably into wrestling history. And some things are just too real to be scripted.