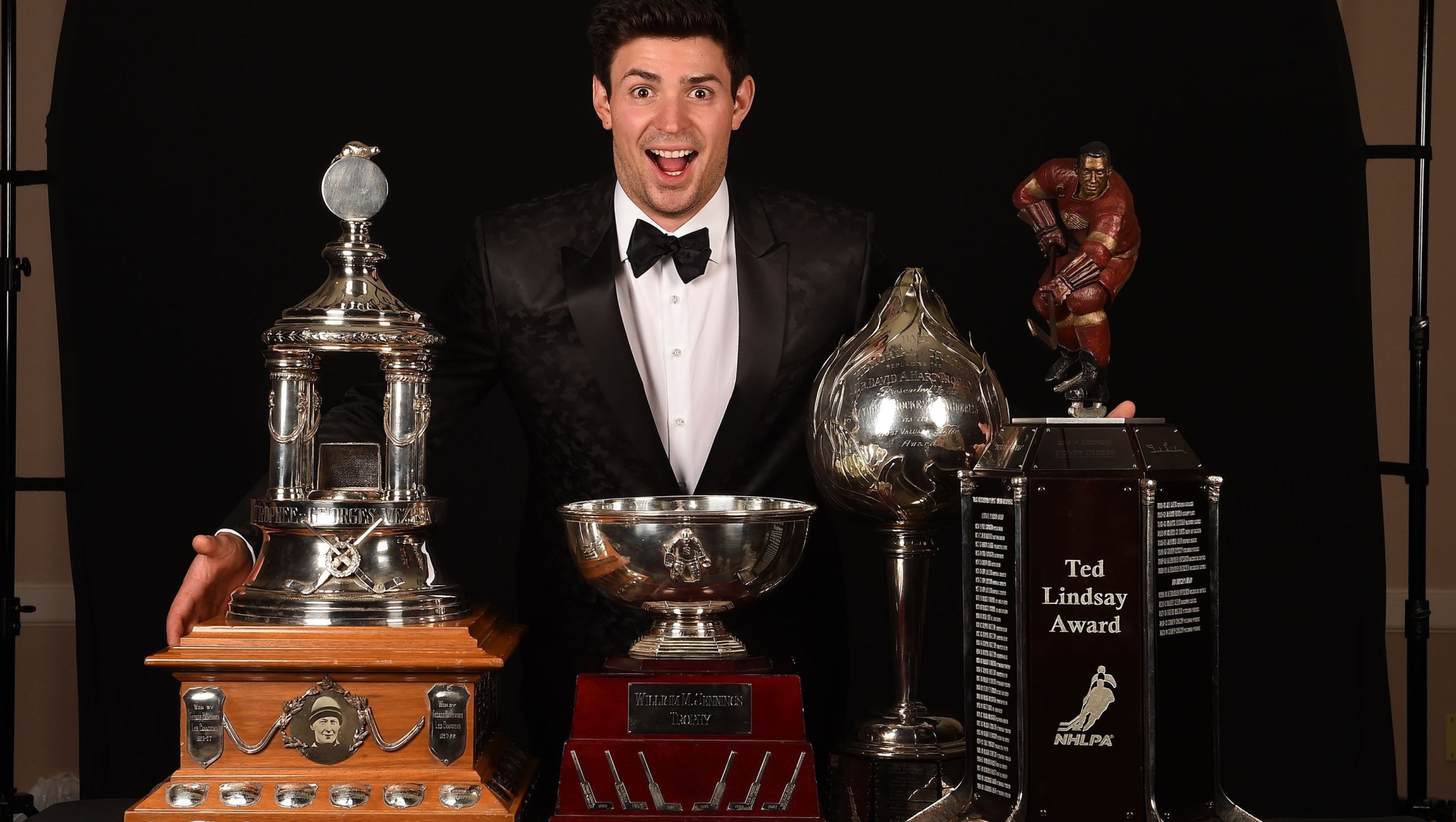 The NHL awards took place last night, broadcast from their traditional home (and, let’s be honest, soon-to-be expansion city) in Las Vegas. There wasn’t much suspense over the MVP, but a handful of other awards were tough calls. Who’d take home the Norris? What about the Calder? Would Rob Riggle be able to get a decent laugh out of this crowd?1

This was my second time having a vote as a member of the Professional Hockey Writers Association. Last year, filling out my ballot was a struggle. This year’s ended up being similar: a fairly straightforward vote for the Hart, an extremely tight race for the Norris, and everything else sort of spread out in between.

Here’s a look at who won what, as well as my own ballot for the awards that the PHWA votes on.

No surprise here. Price was the heavy favorite, having produced one of the better goaltending seasons in recent memory for a Canadiens team that was otherwise good-but-not-especially-great. There will always be some resistance to the idea of a goalie winning MVP — similar to pitchers in baseball, because some voters just can’t get past the “they already have their own award” hurdle — but it does happen, and as the season wore on, a solid consensus emerged that the award was Price’s to lose. (Price also won the Ted Lindsay Award, the player of the year as voted on by fellow players.)

I had Crosby higher than most, but I’m fine with that. As you can see, I have no issue giving my vote to a goaltender, but the Dubnyk pick was the one I went back and forth on the most, since it’s basically based on a half-season. But it was one hell of a half-season, and if saving a team’s entire campaign doesn’t qualify as valuable, then I guess I’m missing something.

Again, no shock here. If Price was considered the league’s most valuable player, it would be tough to make the case he wasn’t also the best goalie. The only surprise was that it wasn’t unanimous, with three voters going with someone else as their first pick.

My ballot: None. The Vezina is picked by the GMs, but I would have voted for Price.

This was easily the toughest call of the year, and the results show that, as the voters were all over the map. Karlsson won the award for the second time, despite having fewer first-place votes that Drew Doughty. That means several writers left Doughty off their ballot completely, which is … interesting.

Something else that stands out is how quickly one good playoff run can change perception. If you asked an average hockey fan who the best defenseman in hockey is right now, Chicago’s Duncan Keith might be the pick based on his Conn Smythe performance. But based on the regular season, he wasn’t even in the top five.

My top three matched the finalists, and although I only had Karlsson third, he’s a more deserving winner this year than he was in 2012. Some will hate this one, because there’s this perception that Karlsson and Subban are offensive guys who don’t play a two-way game. That perception is wrong and silly and based on outdated views of what a defenseman should be, but they’re out there. Personally, I’ll take a guy who makes a good breakout pass and then spends the whole shift in the other team’s zone over a guy who’s constantly blocking shots and clearing rebounds any day.

My one slightly odd pick was Giordano, who missed the last 21 games with an injury. Should that have disqualified him, given how many other good candidates there were? Maybe, but I look at it this way: If he’d missed the first 21 games and then returned to have the exact same season, he’s an easy choice, right? I think he would be, so I’m not going to punish a guy for timing.

Keith really didn’t have a great season, so I’m OK snubbing him. Doughty nearly won the Conn Smythe last year and probably got a nice bounce from that heading into this season; Keith probably benefits from the same next year.

Calder Trophy (Rookie of the Year)

This one looked like it was Filip Forsberg’s award to win at the All-Star break, but a second-half slump knocked him out of the running and gave us a top three that produced an extremely tight race, with Ekblad narrowly edging out Mark Stone and Johnny Gaudreau.

Determining the top five was pretty easy. The order, not so much. I didn’t give Ekblad bonus points for degree of difficulty, even though having an impact as a young defenseman is far tougher than at forward. I just thought he had the best year. But it was close, and I think you could make a strong case for any of these guys.

Speaking of rookies, let’s slip this related category in here:

Given how the voting broke down for the Calder, the all-rookie team wasn’t much of a surprise. Only the goaltending spot was up for grabs.

I went with Hutchinson over Allen, but it was a close call. Hey, remember when some teams had rookies as their undisputed starters? Yeah, me neither.

Jack Adams (Coach of the Year)

This was a tough year for the voters; you could make a strong case for guys like Barry Trotz and Paul Maurice, who weren’t even finalists. While well-deserved, Hartley’s win is a rarity, because the award usually goes to somebody in their first year with a team.

Also, the award for “weirdest vote of the evening” goes to whoever gave Randy Carlyle, the Maple Leafs coach who was fired midway through the year, a third-place vote.

My ballot: None. The Adams is voted on by the broadcasters.

This remains a weird award, and it’s tough to vote when you’re dealing with players you don’t see that often. As always, it’s pretty much an award for forwards; the top defenseman was Roman Josi, who came in 11th.

Some people might look at a ballot like this and complain that I’m obviously favoring All-Star-caliber players, when the voting criteria doesn’t say anything about overall skill level. But in a league in which star players are targeted for extra abuse, I think it’s more impressive to play through all of that while staying out of the box.

This is a relatively new award. It’s also one we probably shouldn’t have, since trying to pick out which GM had the best regular season doesn’t really work. Yzerman’s as good a pick as any, though — he really did get some strong work done last offseason.

My ballot: None. The GM of the year is picked by a committee of GMs, executives, and media.

Bergeron barely edged out Jonathan Toews in a tight race, and those two have combined to win the award for four straight years. This was the second straight year that Toews, Bergeron, and Kopitar were the finalists, the first time in 18 years that had happened for any trophy.

I didn’t quite match the voters here, with Backes in my top three over Kopitar, but I can’t argue much. And yes, I threw in a vote for future Hall of Famer Marian Hossa.

The Masterton is always a tricky one. It’s evolved over the years into an award that recognizes personal adversity, often either illness or serious injury, even though the actual voting criteria is much broader. There’s been a minor push in recent years to remind PHWA voters that somebody doesn’t need to have suffered through a tragedy to win the award; still, it felt like a minor upset that Kris Letang didn’t take this one home.

I felt like Dubnyk’s story, from almost being out of the league to cheap backup to season savior to Vezina nominee, fit perfectly with what the award is meant to encompass, even if it didn’t contain the same sort of tragic elements we’re used to.

No huge controversies here, although Doughty dropping out of the first team is a mild surprise. It’s always kind of weird when the All-Star votes on the blue line don’t match up with the Norris.

No big surprises here, although it always gets a little bit tricky when you start breaking down the forwards by position.3 The defense is basically a repeat of my Norris ballot, with an additional spot going to the underrated Josi. And the goaltender slot gives you an idea of how my ballot would have looked if the writers voted on the Vezina.

And that’s a wrap. Now if you’ll excuse me, I have to go hunt down whoever gave Carlyle that third-place vote. I need to find out if they’re up for writing next year’s monologue.