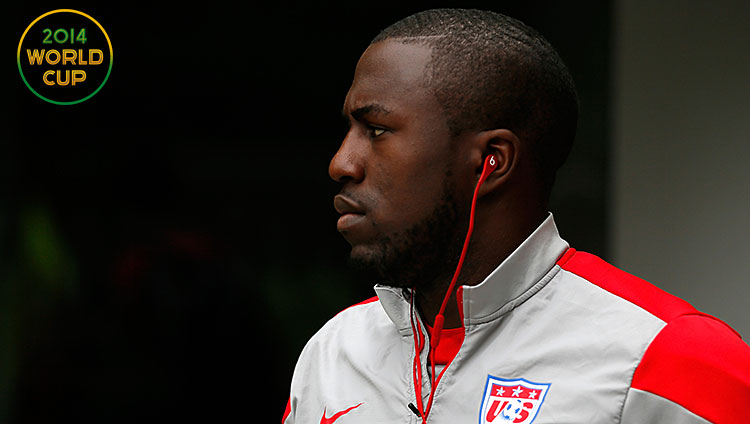 The story of Jozy Altidore’s last couple years is an easy one to tell. After struggling to find himself as a player in Europe, Altidore burst onto the scene with AZ Alkmaar in the Netherlands, where he had two strong seasons, scored goals for fun, and earned himself a transfer to Premier League side Sunderland. In England, he struggled against the stronger competition and lost his form, his confidence, and eventually his spot on the team.

The downturn inevitably impacted his performance for the United States men’s national team. The physically gifted 24-year-old desperately needed a goal to boost his self-confidence going into the World Cup.

It’s a nice story, except it’s not true.

In reality, even while Altidore was going through his turgid season at Sunderland, his form remained strong for his country during the entirety of the last year. There were, in effect, two Jozy Altidores: the Sunderland Jozy, who was horrid; and the U.S. Jozy, who remained a good, if not great, striker for the U.S. side.

Judging a striker’s performance is tricky. On the one hand, the striker has a very well-defined job: score goals. Over a six-game stretch starting last October against Panama, and ending on June 1 against Turkey, Altidore didn’t score for the national team. On the other — and it’s nearly impossible to overstate this point — scoring goals is really, really hard. From the statistical side of things, measuring players purely on the times they put the ball in the net is dangerous. Players don’t shoot a lot, and even when they do, conversion percentages are low. So outside of the very best in the world (like Messi and Ronaldo), all players go through slumps, even when they’re playing well.

On top of that there’s the RBI issue. Part of a player’s goal-scoring tally comes from the type of chances he gets, and those chances are to some degree dependent on his teammates. (How dependent they are is a matter very much up for debate.) You score more if you take good shots, and you take good shots if your teammates pass you the ball in the right areas. (Of course, a striker also has to be able to figure out which areas are the right ones. Like I said, it’s complicated.) This is all a way of saying that Altidore didn’t necessarily play badly just because he didn’t score in six games.

The biggest disappointment of Altidore’s time at Sunderland, other than the obvious fact that he scored only a single goal, is that he took fewer than 1.5 shots per 90 minutes (all stats courtesy of ESPN Stats & Info). That’s not good. Connor Wickham and Fabio Borini, who each ended up taking Altidore’s minutes by the end of the season, each averaged a much healthier 2.6 shots per 90 minutes.

However, during that stretch from October to June, Altidore was getting off a much more respectable 2.3 shots per 90 with the national team. So, what’s the difference? Well, Altidore pretty much shoots only with his right foot. At Sunderland, 21 of his 29 shots were right-footed, seven were left-footed, and he had one header. His national-team shooting toolbox was very similar. Twelve of his 14 shots were right-footed. Since the beginning of 2013, in friendlies and World Cup qualifiers, 28 of his 36 shots have been right-footed.

Altidore is something of a stealth specialist. His second goal against Nigeria was a perfect example of what he does well: get the ball, get isolated in the channel (particularly on the left side, because, again, mostly one-footed), create space, and smash the ball home. But because he’s limited in that way, it’s imperative he gets the ball in one-on-one situations. That’s at least in part why, despite constant tinkering in the midfield, this iteration of the USMNT seems pretty committed to playing two strikers. Sunderland, on the other hand, like most club teams, very rarely played a second striker next to Altidore. They just weren’t good enough for the vast majority of the year. They couldn’t afford to sacrifice numbers in midfield just to give Altidore help up front. That meant Altidore was on his own against two central defenders and was expected to use his physicality to hold up play.

Asking Jozy Altidore to receive the ball and wait patiently is not a recipe for success. But then again, Sunderland were hardly a successful team this season, now were they? Altidore found precious few of the opportunities he likes to capitalize on (and when he did find one, it got disallowed).

The thing to note here isn’t lack of goals, but quality of shots. If a striker is getting quality shots, chances are, he will eventually snap out of a slump. While Altidore was in the striker’s Siberia of Sunderland, he was still playing in the much warmer climate of the national team. During his six-game scoreless streak for the U.S., he managed four shots with his right foot from within 18 yards. He took only seven of those all year for Sunderland.

I’ll take a second here to acknowledge that I sound like a classic player apologist: “It’s not the player’s fault the team was using him wrong.” But that’s not quite what I’m saying. It is not at all unreasonable for Sunderland to expect an athletically gifted, big, strong forward to act as a target man. In fact, for most bottom-of-the-table teams, that’s the bare minimum you’d require at that position. That Altidore, despite his scoring ability, hasn’t developed the ability to play one-on-two, against a pair of defenders, is a failure on Altidore’s part. As it became clear he couldn’t perform in that role, Sunderland boss Gus Poyet looked for other options who could help his team, and Altidore lost first his starting role, and then for a time, his place on the squad altogether.

His time at Sunderland made Altidore’s limitations incredibly clear for everybody to see. And it’d be tempting to assume they carried over to his play for the U.S. during that time. But it’s not true. The U.S. is already well aware of those limitations and taking pains to minimize their impact as best it can. But scoring goals is hard, and it sometimes even the best of strikers will go through a drought. That’s what happened for Jozy and the U.S. — it just happened at the same time he was failing elsewhere. Hopefully that streak is over, though, because if the U.S. has any chance of surprising its group and advancing, it’s pretty likely it’ll come from Jozy, in the left channel, squaring up a defender one-on-one before ripping one home. It’s what he does, after all.