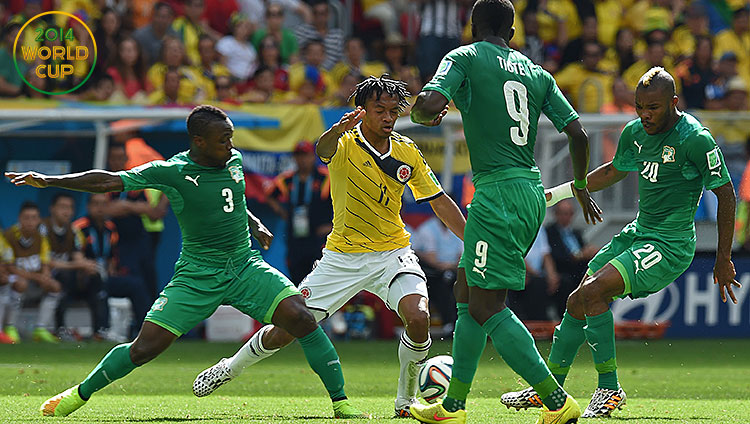 It can be a tricky business evaluating wingers. They are always flitting between flash and substance. Sure, they have all those step-overs and dummies and tricks, but their teammates are over there on the other side of the field, waving their arms in frustration. And, yeah, you just watched him hammer one in from 40 yards, but what about all those balls he’s sent flying into Row Z? There’s a very fine line between a “luxury player” and a game-changer, and differentiating between the two can be a challenge.

And then, sometimes, a guy is so much fun to watch that you just don’t care. Enter Juan Cuadrado.

He assisted this goal in Colombia’s opener, twisting and turning the defender to deliver the perfect pullback pass.

Then, later, he wiggled through a sea of Greeks before setting up Colombia’s exclamation mark.

He added another assist from a corner against Ivory Coast to take him to three and tie him for the very early tournament lead with the Netherlands’ Daley Blind. (Although obviously this is silly, as lots of players haven’t even played two games yet. But still, three assists in two games is a pretty awesome two games.)

He’s created six chances, which ties him for second in the tournament, behind David Silva of all people. (Who knew that a largely anonymous Silva on old, slow, eliminated Spain created seven chances?) So, yeah, Cuadrado has played great. He’s twisted and turned and attempted five take-ons per game, completing three against Greece and one against the Ivorians.

Cuadrado certainly isn’t a household name to new soccer fans, or those who solely follow the Premier League and/or Champions League, but he is already well known among fans of Italy’s Serie A, where he plays for Fiorentina. In Florence, he plays mainly as a right winger, as he does for Colombia, although occasionally he swaps to the left. But, as with most players, while his position is the same, his role and responsibility are somewhat different from club to country.

He’s been mainly a facilitator for Colombia, but on Fiorentina he’s a more determined scorer. He shot 3.1 times per 90 minutes for the Viola, while unleashing only once per 90 for Colombia throughout qualifying and the opening two games of the World Cup. (Numbers, as always, are courtesy of ESPN Stats & Info.) That, by the way, is despite shooting from an unhealthy (at best) 24.5 yards away, on average. He did score 11 goals in Italy, and three were from long range, so it’s at least possible he’s good at it.

But if you’ve watched him, it’s the dribbling that really sticks with you. The five a game he’s trying now is a lot, but it pales in comparison with the 7.7 per 90 he tried at Fiorentina, which tied him for most in the league (minimum 1,000 minutes). And his 3.8 successful dribbles per 90 placed him second. With all that dribbling and shooting, there’s more than enough highlight reel to slobber over.

With Fiorentina, Cuadrado looks like an extremely skilled, if somewhat selfish, winger, but with Colombia he tamps down the shooting, is a little more responsible with the ball, and in general is happier to facilitate fellow stars like James Rodríguez. That’s important because Fiorentina just secured the sole rights to him (the series of loans, partial ownership agreements, and complicated bookkeeping agreements between teams and players in Italy is dizzying enough to make Kafka think it’s a little absurd) and may be looking to cash in. If his international performances help convince some big club that he can tone down his shot-happy ways just slightly, while still not losing his creative spark, he may find himself playing in the Champions League next season. But either way, we get to enjoy him with Colombia at this World Cup. Mostly because none of us play left back.