With Anderson Varejao Injured, the Cavaliers Will Contend … for the No. 1 Draft Pick 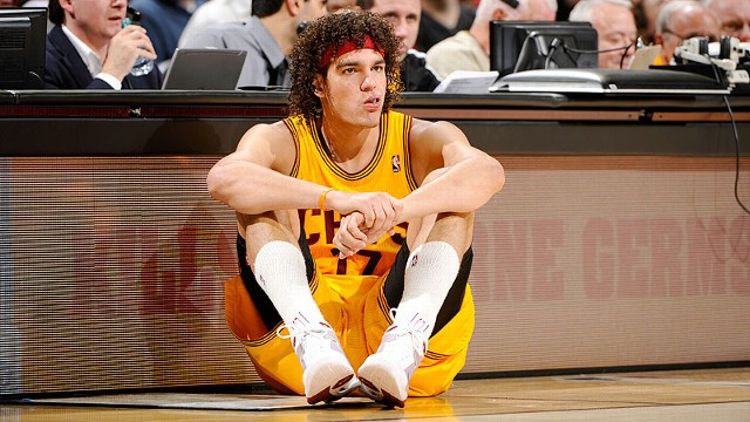 Their chances got better today, when the team announced that Anderson Varejao would undergo surgery this week to repair a messy problem around his right knee. Varejao, Cleveland’s second-best player by about 10 miles, will miss at least six weeks, meaning his minimal recovery time would take him just past the trade deadline. He’s effectively off the market for solid playoff teams who could use an extra big man — Boston (lacking the assets, barring a continued jones in Cleveland for Jeff Green), Oklahoma City (no confirmed interest despite endless trade machine proposals), Miami (stop laughing), New York (no realistic package), Denver (always a wild card), San Antonio (what they’d send is unclear), and perhaps one or two others. Cleveland’s GM, Chris Grant, reportedly loves Varejao, and it’s unclear if he was ever seriously interested in dealing a guy who still isn’t old and could serve as a nice role model for all the young guys here.

And so the Cavs, less than two years after winning the no. 1 pick, have a chance to do it again, unless they use $10 million or so in present-day cap space to upgrade their current roster before the trade deadline. This is, of course, by design. The Cavaliers, flush with max-level cap room last summer, scoured the free agency market and decided to splurge on Alonzo Gee and C.J. Miles. They passed on all the high-profile restricted free agency building blocks — from Roy Hibbert to Nicolas Batum — and somehow came away mostly empty-handed on the front line in a mid-tier market featuring plenty of available free agents (Chris Kaman, Ian Mahinmi, Carl Landry, Green, Boris Diaw, the Memphis backups), available trade targets (Samuel Dalembert, Timofey Mozgov, Gustavo Ayon), and amnesty castoffs (Luis Scola, Elton Brand, Andray Blatche, Brendan Haywood). (A league source says the Cavaliers indeed bid on the still-productive Scola, but not aggressively enough to top the Suns.) They also failed to land a single reliable backup point guard.

The odds of snagging a restricted free agent were obviously slim, and some of the bigs on that list — Diaw, for instance, enjoying life on a big winner, or Green, fairly loyal to Boston — weren’t going to sign in Cleveland without a dangerous overpay from the Cavs.

And Cleveland obviously discussed some of these names, and many others, but in the end they decided mostly to stand pat, keep their cap room, and go to war with Luke Walton, Tyler Zeller, Samardo Samuels, and Jon Leuer as the top big-man backups. Zeller is now starting, leaving Cleveland neck-and-neck with Portland in the race for the league’s worst bench. In fairness, this team looked to be a competitive bad team with the Varejao-Irving pair — a 10th or 11th type in the Eastern Conference, and not the on-court disaster they are right now. Cleveland ranks 28th in points per possession and 27th in points allowed per possession, meaning this is just about the worst NBA team someone could build.

They could have been better, but the Cavs apparently have decided to settle in between team-building “models” — either build through an improbable streak of high lottery picks like the Thunder while remaining lean in terms of salary, or use that clean cap sheet to land a true star player. The Cavs had discussions last season about making Andrew Bynum that player as part of a massive Dwight Howard deal, but the deal happened without them, and Bynum is obviously a medical mystery now.

The Cavs are now on course to straddle those two “models.” They can be terrible again this year and nab another top-three pick, and still keep the max-level cap space required to chase all the starry free agents that could hit the market in July 2014 and July 2015 — a list that will include Kevin Love, LeBron James, LaMarcus Aldridge, and potentially several others. Let’s be clear: James can opt out in Miami after both the 2013-14 and 2014-15 seasons, but there has been no on-record indication he has much interest in doing so. But he might, especially if Dwyane Wade ages poorly, and his former team may well want to position itself for a spot on the short list should that happen.

Irving and Tristan Thompson don’t hit restricted free agency until 2015, though the Cavs will surely look to lock up Irving before then. Cleveland has no other players guaranteed money beyond that.

The rest of this season will be about Dion Waiters and Thompson, Cleveland’s last two first-round picks, selected amid some robust internal debate and to some skepticism from the 29 rivals around the league. The most popular alternative among the skeptics is probably the Jonas Valanciunas–Thomas Robinson front line Cleveland could have secured in those drafts, but we’ve seen very little of either guy on the NBA stage.

We have seen more of Thompson in Varejao’s absence, and what we’ve seen has been encouraging. He’s shooting 48 percent overall, up from an unacceptable 43 percent last season, and that number is up to a flat 50 percent when Varejao hits the bench. He’s also getting to the line more often in those non-Varejao minutes and showing signs that he could emerge as a decent defensive rebounder after alarming early struggles in that regard. Thompson has been a very good offensive rebounder from the moment he stepped into the league, but he showed little aptitude for translating that skill to the other end, where it is probably more important and requires more attention to positioning and detail. He rebounded only 17 percent of opponent misses last season, a subpar number for a bouncy big man. He was off to an even worse start this year, but he’s picked it up of late, and he has rebounded about 24 percent of opponent misses when Varejao sits — a number roughly on par with the perfectly acceptable defensive rebounding rates of guys like Kevin Garnett and Lamar Odom, per NBA.com

He’s starting to come around on offense, too. He’s still not a real post threat, and he’s taken only about 1.25 shots per game directly out of the pick-and-roll, per Synergy Sports — a low number for a big playing so many minutes with a point guard like Irving. He functions better as the “other” big man on pick-and-rolls — the guy who hangs along the baseline as Irving and Varejao run the main play. Thompson’s man in that situation will often have to slide up to Varejao near the foul line after Varejao catches Irving’s pass, and Varejao has become very good in that moment at sliding a quick bounce pass to Thompson for an easy dunk. Varejao has assisted on 10 of Thompson’s 140 baskets, still a strong no. 3, behind Irving (15) and Waiters (13), per NBA.com. Zeller is more of a pick-and-pop guy, and he’s not really able to create that same kind of play. Thompson, for his part, hasn’t yet learned how to make next-level passes on the move.

He’s still not a great finisher, shooting just 55 percent from the restricted area (low for a big), in part because he has a maddening habit of pausing for a fatal beat after catching the ball, or even bringing it down below his waist to load up for a shot. That delay closes open windows and results in more rejected shots than should happen.

But there are signs of promise. Thompson has been more decisive of late when he catches the ball in that in-between area, about 12 or 15 feet from the rim. He’ll take a hard dribble right at his man’s chest, clear some space, and launch a nifty little right-handed floater. He’s also cut out the pauses, or at least reduced them, when he slips to the baseline area on a pick-and-roll and makes the catch there. Too many of his offensive moves end in that in-between area instead of at the rim, and he still doesn’t look comfortable plowing all the way there or timing his jumps/moves in a way that would more easily allow him to do so. He resembles Serge Ibaka from last season a bit in that way, and Ibaka has improved — and continues to do so — on that precise skill.

Thompson is already a solid defender, perhaps the best the Cavaliers have in their regular rotation right now. (Gee is the only other candidate.) He’s active blitzing pick-and-rolls, and is generally fast on his feet. Post behemoths can overpower him, but he fights hard, and the best post players can overpower almost anyone.

It’s premature to judge Waiters, but the early signs are troubling. He has no conscience in picking his shots, the main reason he’s shooting a putrid 37.5 percent overall and 31 percent from deep. He has been as lost on defense as Irving was last season, and is especially prone to issues away from the ball — negotiating screens and understanding how to rotate in space.

Almost every rookie perimeter guy struggles with that stuff, and the lack of any scoring punch on Cleveland’s second unit often leaves Waiters — coming off the bench now — to force the offense. But Byron Scott has to get Waiters to dial things back a bit, especially because he’s a solid and creative passer when he wants to be. He and Irving should be able to function well together, but Waiters will have to make major refinements to his offensive game for that to happen.

Zeller projects as a useful backup with a potentially reliable jumper and transition game, but he has looked overwhelmed on defense; opponents are shooting 56 percent against him on post-ups, per Synergy, and I’m pretty sure that’s the highest number I’ve seen for a big man over a reasonable sample size of shot attempts.

Whether Scott and his modified Princeton system are right for this team, and for Irving, is a different question. Plenty of point guards, including Jason Kidd and Chris Paul, have functioned nicely in it before, and Scott has been willing to run more conventional stuff if his roster and the game situation require it. The lack of progress on defense is disconcerting, but so much of this roster consists of young guards and guys who really shouldn’t be playing much outside of garbage time.

And that’s why Varejao’s injury has this team set to “contend” for the no. 1 overall pick again. The Cavs didn’t necessarily want to be this bad — they didn’t want Varejao to get hurt — but they didn’t exactly position themselves with a Plan B in case of this kind of injury.

The Fallacy of the Baseball Hall of Fame