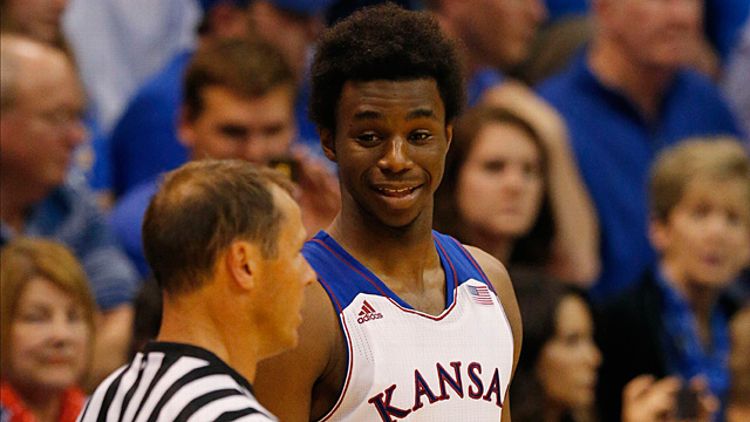 Since we last spoke, the Andrew Wiggins hype cycle has continued to spin like a possessed electric dryer. There have been more magazine covers and a shirtless spread in GQ. His native country’s national sports network, TSN, has made arrangements to broadcast every Kansas game live throughout Canada, and the start of a new NBA season means the “Riggin’ for Wiggins” among the NBA bottom-feeders has begun in earnest. As of Tuesday morning, though, one of the world’s most famous 18-year-olds had not yet accumulated a single statistic for Kansas. It’s not hard to imagine the pressure.

On Tuesday night, that changed — sort of — as Kansas took on Pittsburg State in the first of its two in-state exhibitions. Though the stoic Wiggins can be, uh, hard to read if we’re being extremely generous, he appeared visibly nervous before the game as a sideline camera swooped by the Kansas bench. Once the game got going — and holy cow, there are going to be so many whistles as the teams adjust to the new handcheck rules — it took him a while to shake the butterflies. He scored his first basket right after the 10-minute mark of the first half. Nerves aside, Wiggins showcased his devastating length and athleticism. You could see that when he climbed the ladder to make an athletic catch on a Jamari Traylor lob before finishing with an emphatic, twisting jam. Wiggins, who hasn’t quite proven he’s not a completely numb, apathetic teenager unwilling to heed to the pithy pull of human emotion, was jacked, flexing his arms in a motion approximating a non–State Farm–sanctioned Discount Double Check.

Things got easier from there, though it should be mentioned that the Pitt State Gorillas probably aren’t much better than the defenders from Wiggins’s most viral highlight video, some of whom were made out of popsicle sticks during free period. On top of all the free throws — the endless whistles butchering anything halfway resembling “flow” — Wiggins loosened up and started to ball. He ended the night 5-of-13 from the field, with 16 points, six rebounds, two blocks, and a highlight play that fulfills whatever nightly news quota it needed to. Most importantly, as Wiggins descended to the bench, he flashed what might be his most devastating weapon: a wide, playful, kind of devilish grin.

Again, just so we’re clear, none of it counted, and since there are few towns more depressing to imagine as college settings than Pittsburg, Kansas, you can imagine what kind of challenge they faced from those who were successfully recruited there. (After all, you can’t eat at Chicken Annie’s every night). Though Pitt State’s Devon Branch scored ferociously, ending with a game-high 27, Marcus Smart he ain’t. And for those basketball fans who don’t regularly pay attention to college basketball and are thus prone to flip shit when Wiggins doesn’t score 35, steel yourself for this truth: Wiggins isn’t necessarily that type of player. He’s going to have eight and seven in a game at some point, probably in a win. But on Tuesday, in the biggest exhibition game of the year, Andrew Wiggins got comfortable.

May God have mercy on our souls.