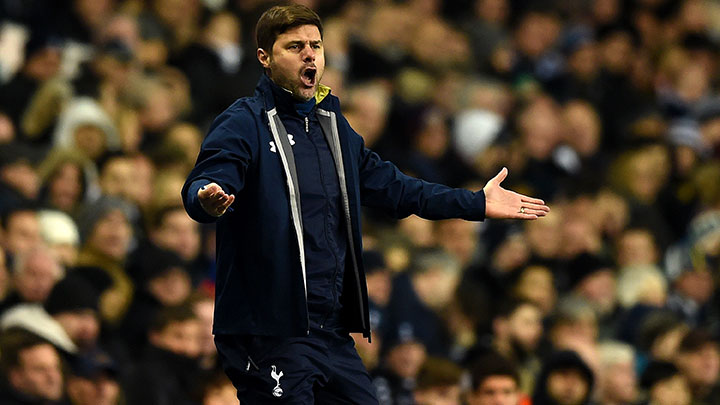 Tottenham just seem like they should be a better team. The club has a ton of players who were very good before they came to North London, in addition to a manager who’s a proven commodity in England. Spurs aren’t Liverpool, who’ve lost their two best players since last season, or Arsenal, who are struggling with depth, injuries, and a gaping hole at the defensive midfield spot. Tottenham aren’t even Everton, a team fighting to match the overachieving levels it hit last year when everything possible went right.

In fact, Spurs seem to be doing some good things, but Mauricio Pochettino’s squad still has very little to show for it. With almost half the season gone, they’re in 10th place, tied with Liverpool on 21 points, six behind fourth-place West Ham. Time is running out to turn things around and contend for the Champions League spots — and any transformation is going to have to start in the back.

Where Has the Defense Gone?

Once upon a time, Spurs were one of the best defensive clubs in the Premier League. André Villas-Boas installed a fearsomely effective high-pressing system that strangled the opposition’s ability to build attacks. In 2012-13, Villas-Boas’s lone full season as Spurs boss, the team gave up the fewest shots in the Premier League and conceded the third-fewest expected goals.1 They also held opponents to the third-lowest passing percentage in the league. Of course, that defense was tied to an uninventive attack that relied on Gareth Bale’s magic to produce goals. Once the Welshman departed, Villas-Boas couldn’t adjust, six months later he was out the door as well, and Spurs became a muddled rudderless ship subject to the tactical whims of interim-in-all-but-name manager Tim Sherwood.

Hiring Pochettino away from Southampton this summer seemed to be an indication that Spurs wanted to stick with the same approach they’d used under Villas-Boas. In Pochettino’s only full season at the head of Southampton — he took over halfway through the 2012-13 season — Saints also posted extremely strong defensive numbers on the back of an aggressive pressing system.2 And yet at Spurs, with a roster that was, in theory, assembled to play his preferred style, Pochettino simply hasn’t yet been able to replicate that form. Spurs are, to put it bluntly, an atrocious defensive team. They give up a slightly-better-than-average 12.20 shots per game,3 but they are the sixth-worst team in the league when it comes to conceding expected goals, at 1.5 per game.

That’s the thing about aggressive defensive systems, though: You’re either great or you’re awful. It’s not enough to be above average when it comes to breaking up passes when you play a high line. For the system to work, opponents have to be unable to pass the ball in the middle of the field and then get funneled to the sidelines, where a defense can pounce. Here’s where Spurs tackled opponents under Villas-Boas in 2012-13: 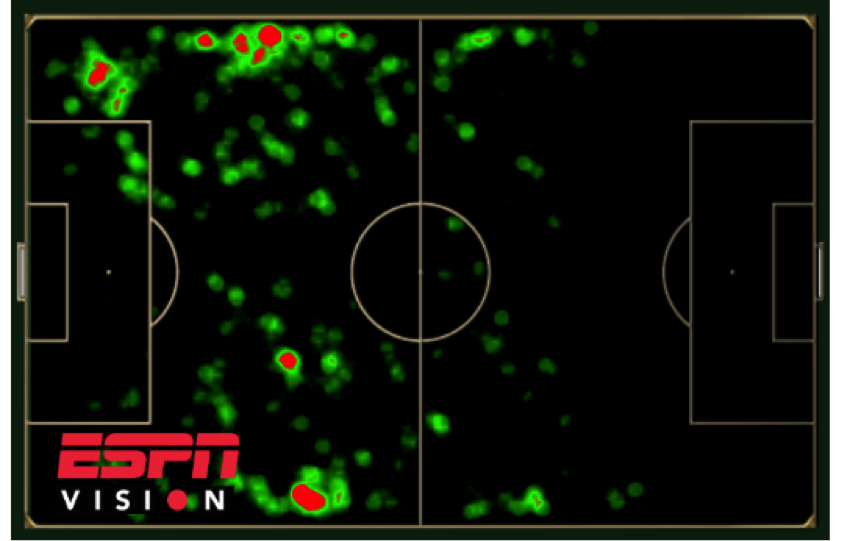 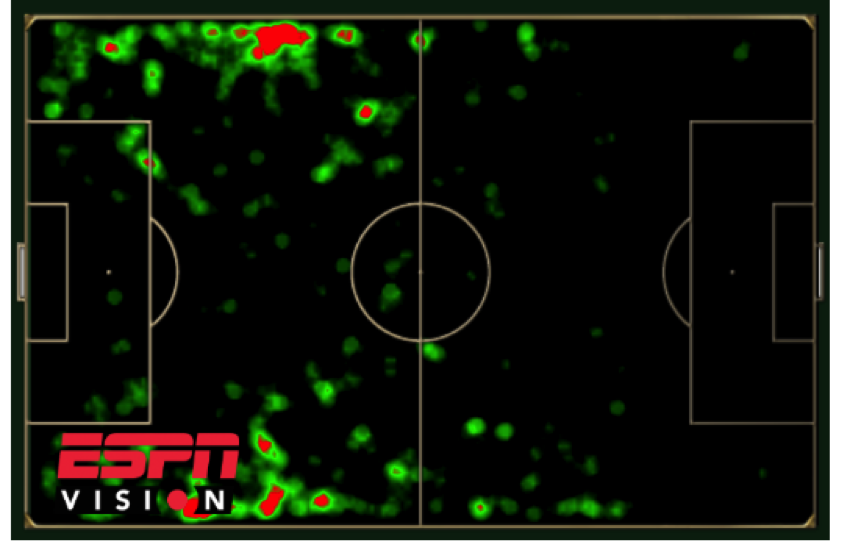 Many good defensive teams have similar profiles, as it’s easier to tackle players when they’re restricted by the sideline. But again, this year’s Spurs are a bad defensive team: 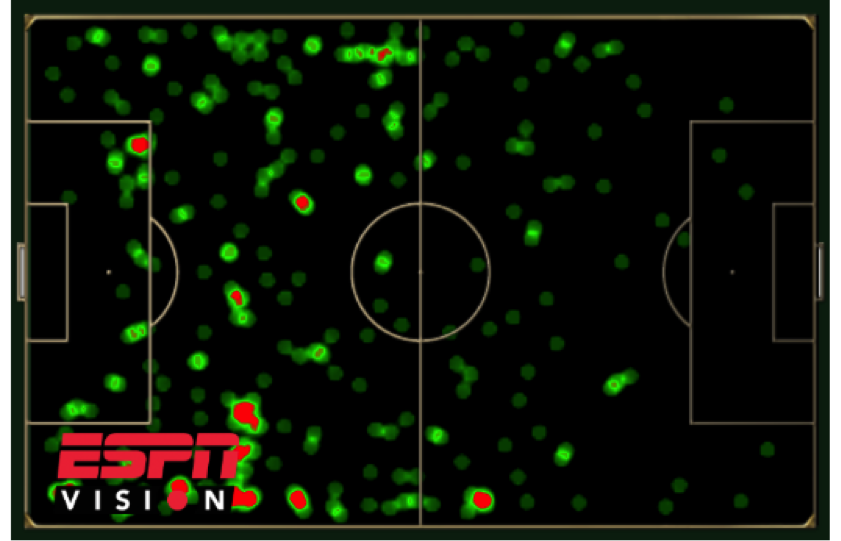 Despite a roster largely similar to the one assembled for Villas-Boas before the start of the 2013-14 season, there are some key differences. First, right back Kyle Walker is still fighting his way back from injury. While Walker’s defensive instincts are occasionally questionable, his athletic ability isn’t — and Spurs have struggled to replace him with Kyle Naughton, who is at least nominally a full-back, and Eric Dier and Vlad Chiriches, who are both center backs and ill-suited to the position.

Additionally, Sandro the Fragile Monster is gone. When healthy enough to get on the field, Sandro was one of the best defensive midfielders in the game. But his injury problems prompted Spurs to cut bait this summer and offload him to QPR, where he’s — you guessed it — currently sidelined with yet another knee injury. Spurs’ current first-choice central midfield pairing of youth academy products Nabil Bentaleb and Ryan Mason saw next to no action under Villas-Boas, stuck behind much of the same crop of mildly expensive midfield purchases (Paulinho, Mousa Dembélé, and Étienne Capoue) who have now been relegated to backup duty.

In the attacking third under Villas-Boas, Spurs would often field a more defensive-minded midfielder like Paulinho, Dembélé, or the now-sold Lewis Holtby as part of the band of three behind Roberto Soldado. Pochettino has mostly ended that experiment, recognizing that Spurs’ ponderous attack needed the added firepower from fielding four primarily attack-minded players. Villas-Boas sidelined Érik Lamela almost immediately after he arrived, eventually also soured on Christian Eriksen, and was also reluctant to give Harry Kane any consistent minutes. Still, even with those players now on the field, Spurs have still been unable to find the right balance; Eriksen and Lamela’s defensive inadequacy surely contributes to the dearth of tackles out wide.

Villas-Boas was hired because he had a system he wanted to play and a very specific way of approaching the game. A year later, Franco Baldini was hired as technical director and proceeded to provide Villas-Boas with a host of new toys the manager left sitting on the shelf. Pochettino appears to be struggling with the same issues, although he has handled them somewhat more politically, focusing on giving minutes to youth products and playing his high-priced attacking players in search of an effective attacking squad — even if it compromises the team’s defensive game plan. Additionally, Spurs recently hired Southampton’s Paul Mitchell to become their “head of recruitment and analysis,” whatever that may end up meaning.

The good news for Spurs is that they have a whole bunch of young, talented players and a young, talented coach. The bad news is that those pieces don’t necessarily fit together, and there’s no apparent, easy path toward fixing that. A year and a half after spending their Gareth Bale money, only Christian Eriksen is likely to fetch more on the open market than what Spurs paid for him, and he’s probably the player Spurs would be most reluctant to sell on. Meanwhile, expensive purchases like Dembélé and Paulinho languish on the bench, and Soldado continues to look like he’ll never be a consistent goal-scoring threat.

The best-case scenario is that either Mason or Bentaleb develop some of the monstrous skills that Sandro brought to Spurs — or that Morgan Schneiderlin, whom Spurs pursued over the summer, brings to Southampton — and as the 22-year-old pair of Eriksen and Lamela mature, they become more competent, energetic defenders. Combine that with the return of Walker and hopefully the defense begins to tighten up. It seems to be the path that Spurs are wedded to for the moment: Let Pochettino work with the squad, focus on the youth players, and hope everything develops. If that doesn’t happen, though, Spurs will need to change the manager (again) or completely overhaul the roster (again) to fix things. And (again) there’s no guarantee either one will work.

‘Cheap Heat’ Podcast: CM Punk in UFC and the Glimmer of Hope in ‘NXT’