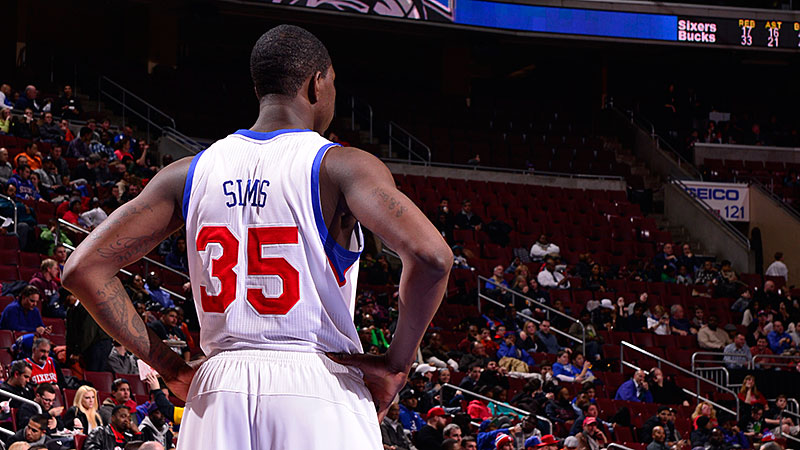 Who Is He? Philadelphia 76ers center Henry Sims

Where Is He From? Baltimore, Maryland

Follow the Bouncing Ball: After averaging around 12 points and six rebounds as a senior at Georgetown, Sims was snubbed in the 2012 draft. Despite standing 6-foot-10 in socks and possessing an archaeopteryx-like 7-foot-4 wingspan, he also had the worst maximum vertical leap and the fourth-slowest lane agility time during the NBA combine. Thus began a two-year journey that has already included (in nonchronological order) summer-league stints with the Jazz, Bulls, and Bobcats, D-League action with the Erie BayHawks and Canton Charge, time on the Petron Blaze Boosters in the Philippines, a month with the Knicks, a 10-day cup of café au lait with the Hornets, and 20 appearances on this year’s Cavaliers squad. Sims was finally sent to Philly, as part of the deal that flipped Spencer Hawes for two second-round picks and Earl Clark (now on the Knicks).

His Game, in Two Words or Fewer: Tries hard.

Social Media Presence? On Instagram, his 1,084 followers are treated to an inspirational Langston Hughes quote (“Hold fast to your dreams, for without them, life is a broken winged bird that cannot fly”) and #normcore photos of Sims with other G-Town big men like Greg Monroe and Roy Hibbert.

Sims’s Twitter account is protected, but since his bio reads, “Be patient with me,” it seems unlikely his feed is a minefield of Carlyle Group conspiracy theories or offensiveness. In general, he seems like a very pleasant and humble young man. That’s partially because the name “Henry Sims” sounds like a trustworthy uncle who spent years as a bank security guard or railroad mechanic before a sudden moment of heroism in the Home Alone prequel.

Is He Saber-Friendly? Sort of? In 29 NBA games spanning over two seasons, Sims has averaged nearly 11 points and 10 rebounds per 36 minutes. But he’s played a total of only 350 minutes. He’s never scored efficiently until now, but in seven games with Philly, he has a 48.8 percent field goal percentage and a true shooting percentage of 57 percent (mostly because he’s knocking down free throws). But enough numbers, you protractor-brandishing dorks! Sims has heart, which can’t be measured with your precious calculators. When his new player expressed a desire to play hard-nosed defense, Sixers’ coach Brett Brown melted into a puddle of gratitude. “You just want to start crying,” Brown said. “I want to hug him and start crying and have him over for dinner. And yes, that is what we need.” That said, Philly’s defense is atrocious with Sims on the floor (and without him on the floor) — his defensive rating of 110 doesn’t indicate that he’s exactly an impenetrable wall of rim protection.

Should We Know Him? In the grand scheme of things, probably not. The likely best-case scenario for Sims is that he develops into a bench big who can grab a few boards and thwack opponents with hard fouls. That said, Hibbert was another late-blooming Hoya center who far surpassed expectations (although Roy dwarfs Sims in their Instagram photo together). But there’s a bigger story. Following the Sixers’ trade deadline fire sale — which was more like a literal fire sale, in which unsold objects were doused in kerosene and torched — Thad Young is basically the scalded front line’s lone survivor. Here are the rest of the tall dudes the team is trotting out to play professional basketball: Sims, Byron Mullens, Arnett Moultrie, Jarvis Varnado, and the injured Brandon Davies. After last night’s drubbing in New York, Philly has lost 17 straight games and is now nine away from equaling the record for consecutive defeats set by the Cavs in 2010-2011. Should the Sixers continue their plunge toward eternal ignominy, Sims will be immortalized as a valuable tidbit of trivia for sports futility. You can do this, Henry!