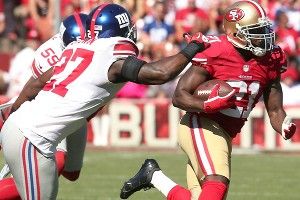 The modern NFL is a game of matchups. Since the salary cap and the spread of strategic concepts throughout the league prevent a team from dominating the way that the 1980s Niners or the early-’90s Cowboys did, just about every team in football has one or two weaknesses that can be exploited by a well-timed opponent. That doesn’t necessarily mean that the team in question will lose to that otherwise-inferior opposition because the matchup is poor, just as a team with a weakness being exploited by the opponent can still win by pressing its advantage in other areas. But a team that’s a bad fit for a specific superior opposition can have a higher chance of causing an upset if they find some weakness ready to be manipulated and attacked.

That is precisely where it pays to look at this year’s upcoming playoffs. With three teams assured of at least one home playoff game in the AFC, and three teams guaranteed a playoff berth (with two guaranteed a likely home playoff game) in the NFC, it’s useful to look ahead and identify the possible bad matchups for those teams. Obviously, a great team is always going to be the toughest matchup for another dominant squad, but I’m thinking more about the still-competing playoff contenders and whether there’s a team that each member of the league’s royalty would prefer were sitting out this January.

Our look at each sure playoff competitor’s possible Kryptonite begins with the Falcons, who don’t want any part of one certain MVP candidate:

Should Fear: Minnesota Vikings
Why? Adrian Peterson. Atlanta’s run defense is subpar. They allow 4.9 yards per carry, the third-worst rate in the league. Only the Bills and Saints are worse. In terms of my favorite split — first-and-10 performance while the game is within 14 points — the Falcons allow 4.7 yards per attempt, which parks them at fifth-worst in the NFL. Adrian Peterson, coincidentally, averages a staggering 7.0 yards per carry in that very same split, the highest rate in the league (among backs with 50 carries or more) by a full 1.3 yards per attempt. Oh, and for fun, the bottom of that list: DeMarco Murray, Felix Jones, Michael Turner. Oh, boy.

The Vikings’ defense might also give that explosive Atlanta offense some trouble. Minnesota’s vicious front four might very well be able to get pressure on Matt Ryan from the edges and force him into a lot of checkdowns and hurried throws, just as the Panthers have in their two matchups with Atlanta this year. If you can take the big play away from the Falcons, as we’ve discovered this year, they’re not the same offense. Minnesota also has a Pro Bowl linebacker, Chad Greenway, who should be competitive with Tony Gonzalez in pass coverage. Fortunately for the Falcons, Minnesota’s chances of making the playoffs are relatively slim; Coolstandings has them at just under 23 percent with two weeks to go.

Should Fear: New York Giants
Why? This one seems pretty simple. Under Jim Harbaugh, the 49ers have more losses at home against the Giants (two, including their playoff game) than they do against the rest of the league combined (one). It’s not a fluke that the Giants have been competitive with the 49ers in San Francisco; they have some weapons that match up very well against the 49ers. Antrel Rolle gives the Giants a hybrid corner/safety to compete with San Francisco’s freak athlete, Vernon Davis. Victor Cruz has consistently been too swift in the slot for Carlos Rogers and company to handle. And while the 49ers have a fearsome pass rush, that hasn’t always shown up against the Giants. The 49ers did sack Manning six times in the NFC Championship Game last year, but that was across 64 dropbacks, and in the two regular-season tilts, they’ve only sacked Manning once in 69 tries.

Of course, there’s a game-changer here who wasn’t heavily involved in the first three games: Colin Kaepernick. While Kyle Williams gets blamed for the conference championship loss last year, you can pin a fair amount of the blame on an offense that went 1-for-13 on third downs, only converting that one with a meaningless checkdown on the final play of regulation. With Alex Smith out of the picture, it seems unlikely that Kaepernick’s offense will be that bad in terms of extending drives. Furthermore, the Giants have had trouble with mobile quarterbacks over the past couple of years; if you watched the last Giants-Redskins game, you saw a clearly overmatched Osi Umenyiora lose contain on Robert Griffin over and over again. On the other hand, the Redskins scored only 17 points in that game, so maybe it wasn’t all that meaningful after all.

Should Fear: Seattle Seahawks
Why? Before smart-aleck Packers fans chime in with “because they own the replacement refs,” there was more to that game against Green Bay than the referees. The Seahawks were able to stifle the Packers’ offense with a devastating pass rush that took Aaron Rodgers down eight times in the first half. The Packers eventually adapted, but they had to dink-and-dunk the ball down the field in the second half to do it, completing just one pass for more than 14 yards. Seattle’s defense is vulnerable against the run, as they’re one of the four teams worse than the Falcons in that first-and-10 split from earlier, but the Packers run the ball like a little kid trying to quickly wolf down his veggies so he can get to the good stuff.

The Seahawks’ offense didn’t do much in those games, either, but it’s also become apparent that Russell Wilson’s playing at a much higher level now than he was in September. By the end of the Packers game, Wilson was completing 57.3 percent of his passes and averaging 5.8 yards per attempt, and that was with the questionable completion to Golden Tate factored in. Since then, Wilson’s completed 64.4 percent of his passes while averaging 8.1 yards per attempt. If this Russell Wilson had been around in Week 3, it’s entirely possible that the Seahawks wouldn’t have needed the infamous Tate call to win.

Should Fear: Cincinnati Bengals
Why? Because the Bengals do just about everything that would keep Patriots fans up at night. One of those things is throwing to a dominant receiver. If his Bengals make it there, A.J. Green would be the best receiver in the playoffs, and the reality is that the Pats just don’t have anybody who can cover him. The likes of Aqib Talib just won’t be enough.

And while nobody truly matches up well against the Patriots, the Bengals might come closest. Cincinnati truly has an elite interior pass rusher in Geno Atkins, who’d be going up against the weakest part of the New England offensive line — its middle. With Leon Hall struggling after last year’s Achilles tear, the Bengals don’t have a true no. 1 cornerback. But they have as many as six competent-or-better corners on the roster when everyone’s healthy, which could make it a little harder for the Patriots to find the mismatches that their offense thrives upon.

Should Fear: Pittsburgh Steelers
Why? No, really, why would the Broncos fear the Steelers, a team they overcame in last year’s AFC playoffs and then again in Week 1 of this year? Well, for one, because those losses weren’t exactly blowouts. The playoff loss last year came against a hobbled Ben Roethlisberger, who couldn’t plant on his injured ankle, while the opening Sunday loss this year saw the Steelers enter the fourth quarter with a 19-14 lead (in Denver) before the Broncos scored 17 points in the final quarter. Obviously, those 17 points matter, but it included a pick-six that made the final score (31-19) look worse than it actually was.

Strategically, the Steelers also offer some matchup issues that might concern the Broncos. They have a big quarterback who’s comfortable hanging in the pocket against a pass rush until the last second, so while Elvis Dumervil and Von Miller will get their sacks, they might not force the worried hurries that they would against a more frightful quarterback, and the Steelers might get a play or two downfield. In addition, Peyton Manning has (historically) played better against 4-3 defenses than he has against units that play the 3-4, as the Steelers do. It’s not like Manning turns into a pumpkin if you line up with three down linemen, but he does lose a little bit of his value.

Should Fear: Nobody
Why? Well, the Texans can fear whoever they like, but there’s no obvious matchup issue for Houston among the teams working their way into the AFC playoffs. Houston is the league’s most complete, matchup-proof team. That’s not to say they’re a perfect team, by any means, just that they’re very good — or better — in all facets of the game, to the point where they can really play any style of football with anybody else in the league.

Some of you are probably thinking about the Patriots game from two weeks ago and that the Texans couldn’t really handle New England’s style of offense, but I think that’s missing the point. The problem in that game wasn’t really that the Texans couldn’t handle New England’s style of play; it was that they couldn’t handle falling behind so early and having their offense become totally one-sided. Unless you have a truly elite passing offense (e.g., you’re the Patriots), it seems almost impossible in today’s NFL to come back from that.