When the Thunder Became Westbrook’s Team 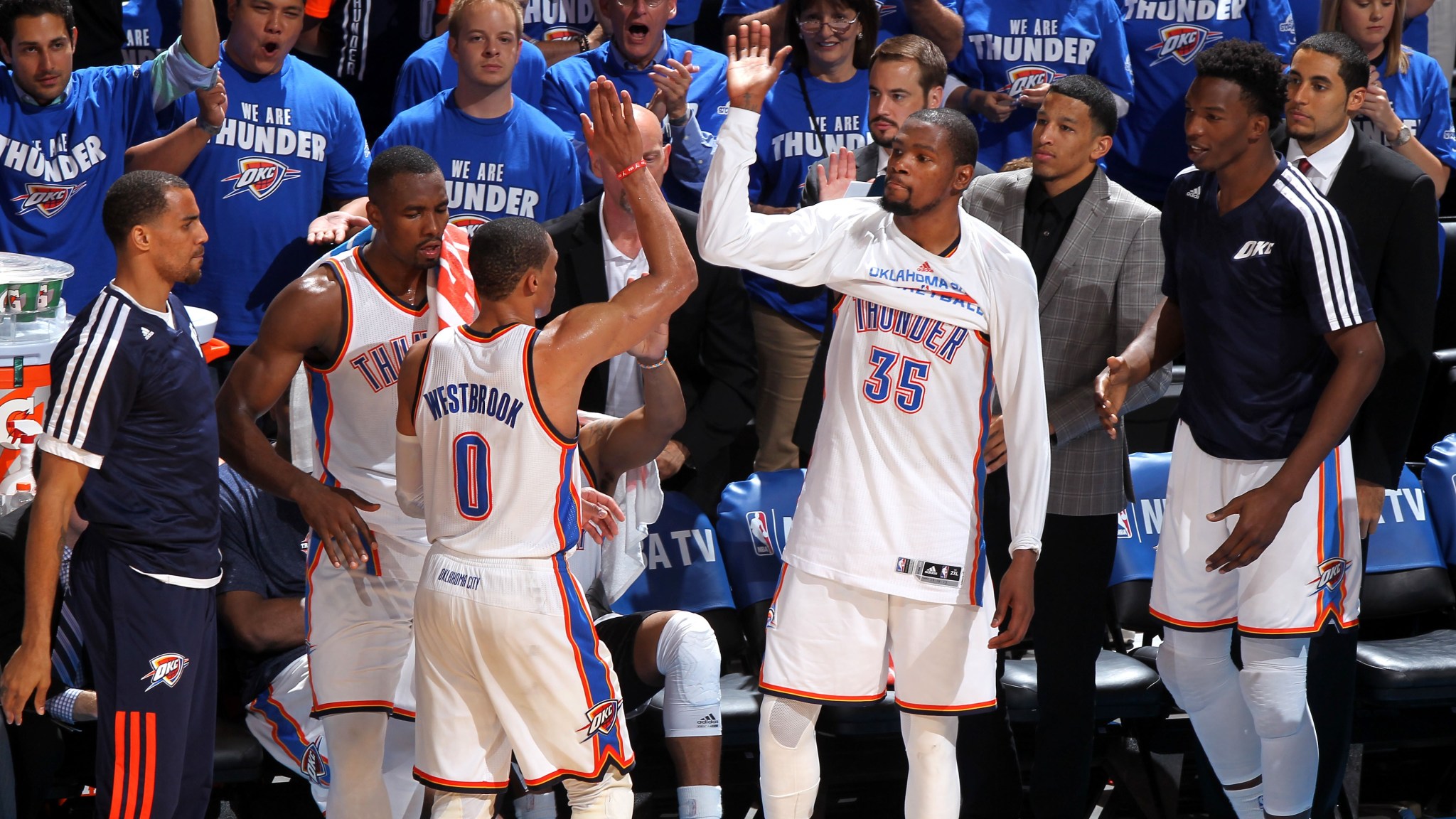 Holy shit. That was exhausting.

Those were my only coherent thoughts about the Thunder on Saturday.

The whole spectrum of the OKC experience was on display in the second half of Game 6 Saturday night. It started when Russell Westbrook sat down with four fouls and the Thunder let a seven-point halftime lead turn into a 10-point hole going into the fourth.

Then the fourth quarter got going, and they started chipping away. Russ came back and started careening all over the court. He drew contact on almost every other possession, and OKC was in the bonus with about seven minutes left to play. He also made a couple of rock-stupid turnovers, saved them with a couple of incredible steals, and then made more questionable decisions and more big shots. Save for two layups and two free throws, Durant was mostly irrelevant during most of this comeback. Then came overtime. That’s when Russ sputtered into a series of bad shots, Durant couldn’t find a way to score on Danny Green, and the Spurs were able to limp by the Thunder on a series of Tim Duncan post-ups.

I was rooting for the Thunder on Saturday night, but by the end I think I was just glad it was over. I don’t know if I could’ve survived a Game 7 with this team. Their highs are so high you can’t help but fall in love with them, but when it stops working you can’t help but double over like you’ve been rooting for this team your whole life. It’s exhilarating, then excruciating, and so so exhausting.

After turning that over in my head for a good 24 hours, I realized that I’m basically talking about Russell Westbrook.

We just watched him put together one of the most incredible playoff runs you’ll ever see from a point guard. His final averages were 26.7 points, 8.1 assists, 7.3 rebounds, and 2.2 steals. He led both conference finals in points, field goals attempted, free throws made and attempted, assists, steals, and turnovers. LeBron and Durant had more field goal makes, but if we were giving out an MVP for the past five weeks, it probably goes to Russ.

He’s not LeBron, but he’s the guy who makes you stop and think for a minute before you say LeBron’s the most incredible athlete in the NBA. The combination of his killer spirit and athleticism make him the most exciting player in the NBA, and anyone who disagrees probably needs to watch more Thunder games. Combine his gifts with the way he attacks, and it’s impossible not to love.

He’s got that psychotic gene. He IS that psychotic gene. Sportswriters all over the country spend millions of words lecturing superstars across all sports to get more obsessed with destroying everyone in front of them, and what they’re really saying is, be more like Russell Westbrook. Imagine what Jadeveon Clowney would look like if you gave him Russ’s perpetually pissed-off approach to everything. There would have been at least four homicides in the SEC last year.

And all of this is an excuse to run the screenshot of Russ with the MVP trophy, because it’s officially the greatest Westbrook photo ever. 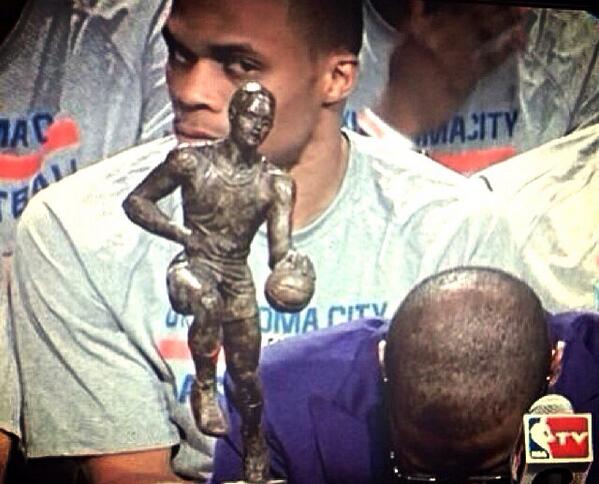 But this wasn’t supposed to be a column about Westbrook, so let’s get back to OKC. A week ago I pleaded with everyone to not nitpick this team if they got blown out by the Spurs without a healthy Ibaka, and that’s still basically true. The OKC blueprint worked more than it didn’t. It may have been an emotional roller coaster, but compare them to a team like the Pacers. They had their own ups and downs, but even the success was pretty miserable. In OKC, the success was like basketball crack, and they were a game away from the Finals.

Still, I can’t resist wondering about the future for a minute here. Because Serge Ibaka came back and they torched the Spurs and it all looked incredible. It should’ve kept going, only we just watched it all unravel.

It was enough to make me do a double take with the entire playoffs. The best teams in the NBA generally take on the personalities of their best player, and for the past five weeks the Thunder mirrored Russ. This is a problem. When you live and die with Russ, you probably die in the end.

Watching him in the playoffs made me love him more than ever before, but watching the second half and overtime Saturday just underscored why they need Durant. When Westbrook went out in the third, after everything he’d done over the past five weeks, KD wasn’t used to filling the massive vacuum he left behind. Then, when things got close at the end, the best scorer on earth was the second option again, and OKC turned to a point guard that can either explode or self-destruct on any given possession.

It’s not an indictment of anything Russ did this year. If anything it’s more on Durant and Scott Brooks. Durant has to be better in close games. He’s got to get easier shots against smaller players and handle the ball against pressure to dominate people who overplay him. It’s not just Russ taking him out of games at the end. Ethan Strauss did a nice job outlining all the ways KD can improve this summer. Plus —for the 1,000th time — Scott Brooks has to find ways to put Durant in better positions to carry the offense.

Likewise: Sam Presti has to go out and find ways to improve the supporting cast, because I swear to God if we have to put up with one more minute of crunch-time Derek Fisher, I’m moving to Oklahoma City and protesting outside the stadium. Brooks probably won’t get fired, but beyond coaching Russ and KD, he has to get better managing the lineups. It took him nine months to start playing Westbrook and Reggie Jackson together, and after letting Perry Jones and Jeremy Lamb spend most of the regular season on the bench, it meant neither of them was really a threat in the playoffs.

There are ways everyone can improve, and they probably will. On a basic level, there’s no reason to panic. People say the clock is ticking — Durant’s a free agent in 2016, Westbrook’s free in 2017, and this window could be closing. But if you look at guys like Dwight Howard and LeBron, the biggest mistake their old teams made was rushing into panic trades that added overpaid and overrated stars to the rotations, cost them flexibility, and eventually made it easier for the superstars to go somewhere else. OKC’s nucleus doesn’t need an overhaul to keep KD happy.

All of that’s true right now, at least. There’s also a chance that as he starts to harness all his powers, the sheer force of Westbrook’s personality makes it inevitable that this team will always take on his best and worst qualities in the playoffs. All this feels like a big ol’ HOT TAKE, where evil Westbrook wrestles control from the NBA MVP, but it’s what actually happened this year. Go back and watch Game 6 again.

Two days later now, it makes me wonder what happens if Westbrook keeps getting better as a scorer and Durant and Brooks don’t really change. I want to see them try it again when everyone’s healthy for an entire playoffs, because they’re still the most talented team in the NBA, and if you add a better supporting cast, there’s a good chance the talent trumps all these questions by itself.

I’m also 100 percent in the tank for Russ and KD at this point. Everyone should be. Unless you’re from Seattle, it’s hard to root against them. Whether it’s Durant gliding to 30 a game or Russ throwing himself all over the court, it’s all pretty addictive.

But even as a full-on OKC bandwagoner, I’m genuinely curious as to how it all fits over the next few years. It’s easier to hand it to a player who can get to the rim against anyone and get wide-open pull-ups than it is to run plays for a scorer who needs help to get open. That will always be true. And as easy as it is to hand it to the point guard, it’s just as hard to ask Russ to tone down his game and feed Durant for entire fourth quarters, because that’s just not how he plays. So that’s not how OKC plays.

These playoffs saw Russ go supernova, and turn into Point Godzilla, and attack his way into America’s heart. He was at the peak of his powers. But we never really saw Durant at the peak of his, and that may not be a coincidence.

“What clock? There’s no clock,” Westbrook said this weekend. “I don’t believe in saying the time is closing. We have a lot of guys on this team capable of making things happen, and our organization has done a great job of putting us in the position to be able to win the championship every season. And once it gets to that point, it’s on us to make it happen.”

Maybe the clock isn’t ticking now. But it will be if this happens again next year.

Malibooyah: Meet Seven of the Greatest Pickup Basketball Players of All Time

Men in Blazers: Live From Broadway, With Many Special Guests!