What’s the Deal With the Caps in Close Games? 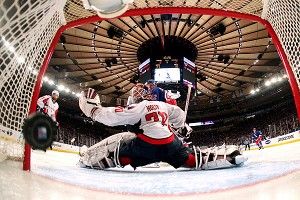 Color commentator Eddie Olczyk, Game 5 of the Capitals-Rangers series, 1:55 left in the third period, talking about the Capitals as they narrowly cling to a 2-1 lead:

This team is completely different from years past. They know how to defend a lead! They have their sticks … off the boards and in, stop hard in the neutral zone … this is textbook.

Shortly thereafter, of course, Capitals forward Joel Ward committed a high-sticking penalty that earned his team a double-minor, and the Rangers took advantage of the ensuing four-minute power play by scoring with seconds left in regulation to tie the game before finishing the game 95 seconds into overtime.

Yes, Olczyk was wrong. Every pundit/commentator/analyst is going to be wrong a fair amount of the time, ourselves included. Showing off how hindsight works isn’t the point here. What’s worth talking about, instead, is the idea Olczyk was applying to the Capitals, and what it means in the context of both their playoff run and the sort of team they’re going to look like moving forward.

Olczyk’s comment about the way the Capitals have changed their play, for the uninitiated, comes as part of a multi-year narrative into Washington’s style of play and why it hasn’t worked in the playoffs. Jonathan Willis covered it in a piece for our site yesterday, but the narrative is simple and familiar: The Capitals changed coaches, firing an offensive-minded maverick (Bruce Boudreau) and bringing in a defense-oriented disciplinarian (Dale Hunter) who has changed the team’s system to one perceived to be more effective in the playoffs, even at the expense of alienating or minimizing the impact of his star player (Alexander Ovechkin).

The statement Olczyk was making clearly implies that the Hunter-era Capitals are doing the little things that the Boudreau-era Caps would have skimped on or ignored with a lead late in a hockey game; essentially, the hockey equivalent of a “small ball” argument from baseball. The most obvious manifestation of that newfound emphasis on the little things, even before the collapse in Game 5, has been Washington’s ability to block shots from reaching rookie netminder Braden Holtby; the Capitals led the league in blocked shots through Game 4, during which they blocked nearly four times as many shots as the Rangers. It makes sense: block shots, play tough defense, you’re going to win more hockey games.

One question comes to mind, though, to test this theory: Have the Capitals actually been any better at holding their leads in the playoffs under Hunter than they were under Boudreau?

It depends on how you slice it, but the answer is pretty clearly, “Not really, no.”

We went back and broke down the numbers for every Capitals playoff game under both Boudreau and Hunter and tracked how their teams did in the harsh reality of tight playoff hockey. Olczyk’s statement obviously isn’t meant to imply that the Capitals weren’t capable of holding four-goal leads in the third period under Boudreau, so we specifically focused on how the Capitals did in games that were close during the third period. And since Olczyk appeared to be talking about those desperate situations when a defense simply tries to shut the door and doesn’t concern itself with trying to score while holding onto a narrow lead, we also split out the data by how the Capitals did when stuck in a tight game inside the final five minutes of regulation.

That table strictly considers the outcome of the game and the time frame in question. So, if the Capitals went into the third period up 1-0, gave up two goals to blow the lead, and then scored one to tie it up before winning in overtime, we’d call that a win. Not exactly what Olczyk was suggesting, but we’ll get to that point in a second.

What you can see by looking at Boudreau’s history is that his team closed out narrow wins in the playoffs at a roughly similar rate to that of Hunter’s Capitals this season. In fact, Boudreau’s teams never once lost a playoff game where they led by a single goal with five minutes or less to go, the exact sort of situation Olczyk was describing when saying that the Capitals had learned how to defend a lead. The biggest difference between the two coaches’ runs has come in comfortable wins; namely, Hunter’s team hasn’t had any during this playoff run, while Boudreau’s teams did so regularly. That disproportionate number of close games is why the narrative about the Capitals learning how to win has become so dogged. The Capitals haven’t played better in close playoff games under Hunter, they’ve just played more of them.

As you might suspect, because the Capitals had so many two- and three-goal leads under Boudreau that they haven’t enjoyed under Hunter, they were more likely to hold a lead in the third period without blowing it under their previous leader. So let’s make it a fair fight. Let’s strictly look at how the Capitals did while holding a one-goal lead in the third period of playoff games under Boudreau and under Hunter. We won’t consider the final outcome of the game, but instead, simply whether the Capitals ever allowed the opposing team to tie the game. That should really speak to Olczyk’s (and the league’s) narrative, right?

Doesn’t it seem like they’ve been better than that in close games? Well, if it does, you’ve been tricked by independent outcomes. The Capitals blew third-period leads in games 2 and 5 of the Bruins series before doing so again in Game 2 of the Rangers series. In each case, the Capitals scored the next goal of the game and won the contest. It’s great that they won, but “knowing how to win” in the context of Olczyk’s statement and the new Capitals style doesn’t mean “allow a goal and then score another one.” If anything, that’s Bruce Boudreau’s style! The Capitals had been a little lucky to win all three games in which they had blown leads, and it had masked their struggles in doing so before now. That’s one of the many reasons you don’t derive significant meaning from small samples of games, even if they’re important ones. (That same logic also suggests that both Boudreau’s and Hunter’s performances in these small numbers of games are basically meaningless.)

OK, enough of the stats. If you still believe in this one, let’s finish up with some common sense. Olczyk’s comment and the narrative that supports it are way too cynical to ever be realistic. Are we really to believe that the Washington Capitals — the same team that averaged nearly 49 wins per season during Boudreau’s previous three-plus seasons at the helm — were so impossibly tactically naive that they didn’t know to sell out and block shots at the end of close playoff games? That Alexander Ovechkin was more interested in doing pirouettes and planning his Eastern Motors commercials than he was to dumping the puck down the ice in key moments? And hey, if you think Ovechkin was on another planet, what about Cup-winning veterans like Sergei Federov and Jason Arnott, who were acquired to play on those teams? Were they, too, brainwashed by Boudreau’s system and insistent upon handing opposing shooters countless attempts at goal? The Capitals were a young team, but somewhere amid the thousands of games that their players had participated in or watched on television, you think it might have stuck with them that they should focus extra-hard on defense when they have a lead at the end of a playoff game. If you go watch those games under Boudreau, you’ll find that those naive, inept Capitals who didn’t know how to win did exactly that. While Washington might very well be a more defensive-minded team these days, they haven’t learned anything new about how to win close playoff hockey games.