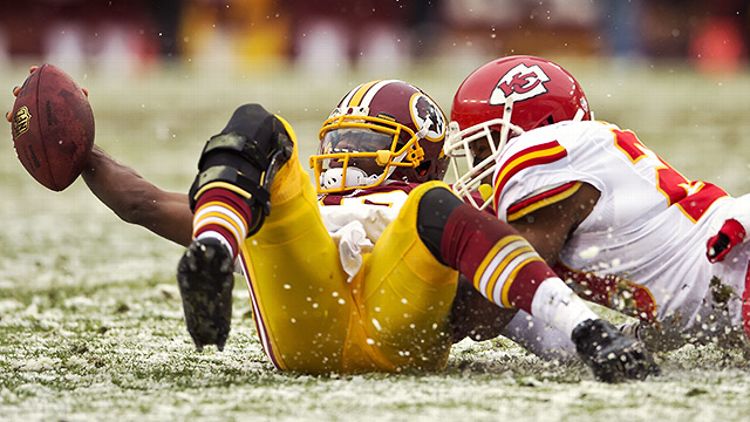 Last week, the Washington Redskins benched quarterback Robert Griffin III. We’ve heard all sorts of explanations: that Griffin had taken too many hits; that the franchise needed to see what it had in backup Kirk Cousins; that head coach Mike Shanahan was trying to send the message that he’s the coach and Griffin merely the player; even that Shanahan was pulling a George Costanza and trying to get fired. There’s a kernel of truth in all of those explanations — well, probably not the Constanza theory — but after going back and studying the film from every game of Griffin’s last three seasons, I’m certain that Griffin’s play was the main reason he didn’t suit up Sunday and won’t play Washington’s final two games.

Despite the torrent of leaks, media reports, and bizarre press conferences, we know very little about how Washington actually came to this decision or about the team’s overall future direction. But we know one thing: Griffin will still be Washington’s starting quarterback in Week 1 next season. Despite the fact that Griffin hasn’t played well, despite the injuries, and despite the dalliance with Cousins, Washington simply has too much invested in Griffin to move on just yet. For now, Griffin’s future is still the Redskins’ future. But if the quarterback wants to keep his job long term, he must play better. And I think he will.

I’m not sure any modern-era quarterback produced a more magical two-year run than Griffin’s 2011 and 2012 seasons; and if someone did, it probably didn’t span across his last year in college and his rookie NFL season. Griffin followed up his dazzling Heisman-winning season at Baylor with an even more impressive NFL Rookie of the Year campaign, passing for 3,200 yards, posting a 4:1 touchdown-to-interception ratio, and managing a stellar 102.4 passer rating. Oh, and he also rushed for 815 yards and seven touchdowns while leading the Redskins to the playoffs, doubling their win total from the previous season. But Griffin’s two-year run ended in grisly fashion, and the lasting image of his rookie campaign will always be his already injured knee finally giving out as he crumpled helplessly to the turf.

The offseason was filled with promises of Griffin’s triumphant return, and while he managed to start the season opener, he was a shade of his former self. It wasn’t just his running ability. Everything was off.

Coordinator Kyle Shanahan’s offense hasn’t done Griffin many favors. Last season, the Washington offense evolved into a dangerous hybrid of the West Coast, the Denver Broncos’ stretch running game, the Nevada pistol read-option, and the Baylor spread. With Alfred Morris carrying the load on the ground and Griffin slinging strikes off play-action, Washington was tied for first in the NFL in yards per play. But Griffin’s legs were the glue that held these pieces together. Defenses, while also trying to defend more traditional looks, faced the constant threat of Griffin keeping the ball on a read-option, running a bootleg pass, or simply scrambling for a key first down — or touchdown.

But while playing with a diminished Griffin this season, the Redskins seem to have junked most of the Baylor influence and instead alternated erratically between Shanahan’s stretch run game, the pistol, and the “bunch” passing plays that NFL defenses have faced for years. The Redskins have been running three disparate offenses that don’t add up to one coherent whole.

Washington’s disjointed schemes don’t entirely absolve Griffin, however. Game plan issues aside, Griffin still missed open receivers, throws, and blitzes this season. I don’t remotely buy the notion that Griffin “can’t read defenses” or is merely a “one-read quarterback” (whatever that’s supposed to mean), as I’ve seen him locate secondary receivers and I know he understands defensive coverages. Still, one doesn’t need to be Peyton Manning to know this isn’t how it’s supposed to work:

That kind of stare-down throw into coverage wasn’t Griffin’s biggest issue this season. Griffin’s footwork is what really got him off-kilter, though in fairness, this issue likely stemmed from his injuries and lost offseason. While much is rightfully made of a quarterback’s vision, a quarterback’s footwork is what tells him where his eyes should be in a well-designed passing attack. A quarterback’s every step should be tied to his receivers’ routes. “His feet are telling him when to move to no. 2 and no. 3” in his passing progression, explained current 49ers head coach Jim Harbaugh some years back. Mastering that has been a recurring problem for Griffin since his surgery.

Griffin’s footwork not only hurt his reads, it hurt his accuracy. “Body position is absolutely critical,” Redskins quarterback coach Matt LaFleur recently told ESPN’s John Keim. “If you don’t have good body position, your balance is off and your accuracy will be off. It’s absolutely critical you get your body in correct position to make the correct throw.” LaFleur added that, for Griffin, this season has “been a constant work in progress.”

It wasn’t all bad, however. As you can see in this GIF, there were times this season when Griffin dropped back, manipulated the safeties with his eyes, and hit a secondary receiver.

It’s not a question of whether Griffin can do it. It’s about consistency. Griffin’s inconsistent footwork can’t be dismissed, but it is fixable. As LaFleur observed to Keim, it’s hard to focus on the fundamentals “when you have so much going on and [are] so focused on the game plan.”

There’s one area of Griffin’s game that truly concerns me, though. And if we believe Mike Shanahan, it was also his biggest worry: Griffin takes too many hits. More accurately, he takes too many big hits. Even more accurately, Griffin, more than any other player I’ve seen, seems preternaturally gifted at taking the biggest hit imaginable in almost every circumstance. It sounds like hyperbole, but in nearly every game there are three, four, five, and sometimes six or more times that Griffin goes flying as though some Wile E. Coyote explosive detonated in his face.

There are many, many, many, many examples of Griffin getting lit up, either resulting in injury or coming dangerously close. For Griffin, it’s partly about the read option, but not entirely. Eagles head coach Chip Kelly has a mnemonic for quarterbacks when they run the ball: “touchdown, first down, get down.” The idea is that the quarterback takes what the defense gives him — but absolutely no more.

“If [the quarterback has] open grass and there’s nobody in front of you, hopefully you’ll run all the way,” Kelly explained this summer. “If you can go 60 yards and run it in, God bless you. We’re not telling them to hook slide. We’re just telling them that when contact is imminent, our guys are not 250-pound bowling balls. They’re going to run you over.”

Griffin not only gets hit in the pocket and during read-option runs, but he also seems to find new and creative ways to take a beating.

It sounds harsh — and a little ridiculous — to say Griffin can improve as a quarterback by not running into walls or allowing himself to be tossed around like a rag doll when he’s trying to throw blocks on reverses, but it’s true. Hits like these have a cumulative effect that will diminish Griffin’s ability to play quarterback. As Kelly noted, quarterbacks “have to understand the best ability is durability. They have to go out and play the next snap.”

Despite all that, I’m still optimistic about Griffin’s future. He was one of my favorite all-time pro prospects when he came out of Baylor, and, unless injuries ultimately shorten his career, I still believe he’ll be a fantastic NFL quarterback. Inconsistent play is the norm for young quarterbacks, not the exception. It’s hard to find a person who doesn’t think Andrew Luck will be a star (and I agree), but Luck still had a four-game stretch this season in which he threw two touchdowns compared with five interceptions; Colin Kaepernick appears to be playing better now that he has a more complete set of healthy receivers, but he has delivered some clunkers this year, including a game against the Seahawks in which he averaged negative yards per passing attempt after factoring in sacks and interceptions. And it’s only rubbing salt in the wound for Ravens and Giants fans to note that, at least statistically, Griffin’s 2013 season rates out better than all but two of Joe Flacco’s six seasons, and that it took Eli Manning until his fifth season to have a better passer rating than the one Griffin managed this year &#8212 a year pretty much everyone declared “awful.”

It’s going to be a long offseason for Griffin, particularly since it’s essentially already begun. He should feel secure that he’s going to be the team’s starter moving forward and be able to focus this offseason on becoming a more complete player. In Week 15, Cousins delivered some good and some bad, but finances dictate that Washington remains Griffin’s team, at least for now. And while I’d be shocked if Griffin’s former college coach, Art Briles, winds up as Washington’s next coach, the man who replaces Shanahan will surely have to present Dan Snyder and general manager Bruce Allen with a plan that prominently features Griffin.

Becoming a great NFL quarterback does not require a genius IQ or mastering a secret set of techniques. It requires understanding defenses, possessing the ability to methodically and consistently identify open receivers, and throwing the ball to those receivers decisively and accurately. To paraphrase Warren Buffett, the way one becomes a great quarterback is strikingly simple — but not at all easy.

For the next several months, Griffin should only worry about becoming a better quarterback. Getting the opportunity to do that is all any player can want. In the fall of 2014, we’ll find out how much progress Griffin has made.