What Kevin Love’s Injury Means for the Timberwolves 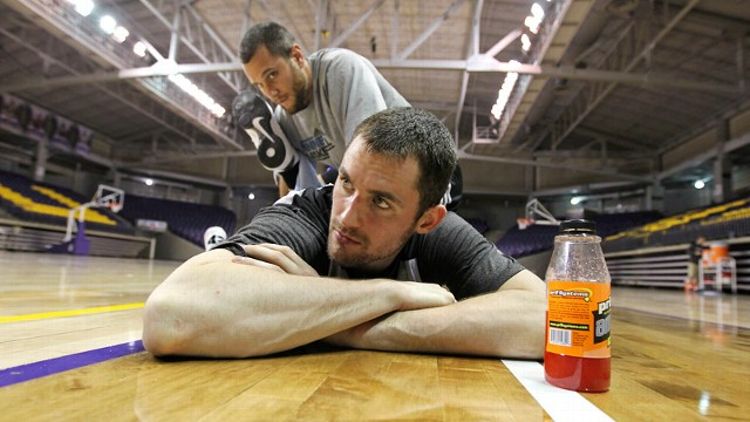 The Minnesota Timberwolves, with Kevin Love and Ricky Rubio healthy, projected as a clear playoff team — and one that might have surprised folks by pushing something like 50 or even 55 wins. They were a .500 team when healthy last season, and they upgraded one of the two or three worst wing rotations in the league with Chase Budinger, Alexey Shved, Brandon Roy, and the jack-of-all-trades game of Andrei Kirilenko. Toss in some internal improvement and a full season of Nikola Pekovic producing during minutes in which Darko Milicic generally crapped the bed, and the Wolves looked like a playoff lock.

Of course, Rubio tore his ACL in the middle of last season, and it’s unclear when he’ll return to both the lineup and something resembling top form. Even worse news came this afternoon, when the team announced that Kevin Love will miss between six and eight weeks with a broken hand. Six weeks means 14 games missed, and eight weeks, the worst-case scenario here, would keep Love out for a full 20 games or so.

And in a competitive Western Conference, the combined absences of Love and Rubio for that quarter of a season might be enough to keep Minnesota out of the playoffs. The biggest winners of the preseason so far are probably the Golden State Warriors and Utah Jazz, candidates for one of the last two playoff spots who have stayed mostly healthy as two other clubs in their stratosphere (Minnesota and Dallas) have seen tentpole superstars go down with injuries.That said, Andrew Bogut’s return date is unclear, and without Bogut, the Warriors are the same defensive sieve they’ve been for nearly their entire existence as a franchise. The best thing Minnesota has going for it right now, in terms of maintaining playoff hopes, might be a relatively easy (though road-heavy) early schedule and the uncertain state of the Warriors’ and Mavs’ rosters. Basketball Prospectus is projecting the Wolves to win 52 games even with Love’s setback, and ESPN.com’s John Hollinger has their win total dropping to only 44 for the season — enough to stay right in the thick of the playoff race.

But Love is a tentpole superstar, and the Wolves are now down two foundational players. Sometimes injuries reach a point at which their collective impact becomes greater than individual statistics suggest, and with the loss of their franchise centerpiece, the Wolves might be there for the first quarter of the season. Love is that crucial to everything they do, more so than even Rubio.

Rubio has the potential to be a game-changing point guard, but he shot 36 percent last season (and fell off badly from the floor after a decent start), and the Wolves have players in J.J. Barea and Luke Ridnour who can at least approximate Rubio’s skill. (They can’t approximate Rubio’s long arms and smart feet on defense, where he was nearly as valuable to Minnesota last season as he was flinging off-the-beaten-path passes to his big men on the pick-and-roll.)

Love is irreplaceable to the team’s offense. Minnesota scored 104 points per 100 possessions with Love on the court last season, nearly a top-five mark, and just 96.2 when Love sat, per NBA.com’s stats database. That Love-less mark (sorry) would have bested only Charlotte’s historically terrible offense over the course of the full season. Rubio’s absence obviously contributed to that drastic split, since Rick Adelman could have propped up the team’s scoring by staggering the minutes of his two young stars. Even so, the team’s offense actually performed better when Love was on the floor without Rubio (105.2 points per 100 possessions) than when the two shared the court (102.6).

The sample size is small regardless, and the Wolves will obviously develop into a better scoring team in the long run with both guys healthy. And all those upgrades have Minnesota positioned at least to have a puncher’s chance with both in street clothes. Adelman’s motion-based offense will get the most out of its parts, and Kirilenko’s cutting/passing game would seem a perfect fit in that system. He and Williams are both at least as well-suited to playing Love’s power forward spot as they are small forward, where they’ll have to play when Minnesota is fully healthy again. Roy says he feels great, Budinger can space the floor and shoot off screens at a level far above anything the Wolves had last season, Shved will alternatively dazzle and confound, and Pekovic can work as a no. 1 interior option for stretches of every game. Pekovic’s scoring numbers held up after Rubio’s injury last season, suggesting he can thrive without Rubio’s pick-and-roll wizardry, per NBA.com.

Still: There is no centerpiece here other than Adelman’s offense itself. The days of Kirilenko and Roy creating their own efficient shots and drawing multiple defenders are long over. Barea is a pest, but his best production has come when paired in the pick-and-roll with a jump-shooting big man — the kind of big man whose long-range shot is so dangerous that defenders are scared to slide off of him and contain Barea racing around the pick. Love fits that bill, and the Timberwolves built much of their offense last season — and especially their non-Rubio offense — around the attention Love draws all over the floor.

Stick Love in the pick-and-pop, and Minnesota’s guards have clean paths into the paint. Station him around the perimeter as a spot-up threat, and suddenly Pekovic is rolling to the rim without having to go around a help defender. Love’s post game also became a legitimate weapon, especially from the left block, where he flashed a mean face-up jumper and a nice righty hook. The Wolves built several sets around that post game, including a nice one in which Love would set a high screen for a point guard, cut down below the foul line, scurry around a double-screen, and seal off his man on the left edge of the paint.

This isn’t to lionize Love, who remains only a so-so (if much-improved) defender. The Wolves struggled defensively last season, and neither he nor Pekovic offers much in the way of rim protection. He also became weirdly foul-prone in crunch time last season. But he was a legitimate MVP candidate (non-LeBron division), and he was carrying Minnesota’s offense almost single-handedly before a string of injuries wore him down.

It’s unclear how well that offense can survive with two key absences now, and if it falls into the bottom 10 over that stretch, the Wolves will be in trouble. Those first 20 games aren’t especially hard, but they also aren’t easy, and they include two head-to-head tilts against those Warriors. Kirilenko will help this team’s defense, but he’s not the stopper he once was, and this team gets awfully small without Love on the glass. Williams didn’t do much rebounding at all last season playing heavy minutes at small forward, and Pekovic was much more of a force on the offensive glass than on the other end. The Wolves overall rebounded just 69.6 percent of opponent misses with Love on the bench, a mark that would have ranked next-to-last overall. Pekovic figures to rebound more without Love around to snag everything in sight, but the Wolves’ other new bigs — Lou Amundson, Dante Cunningham, and Greg Stiemsma — don’t really add much in this respect.

In other words, this team, though well-coached and more talented than last season, still could struggle to play average ball on either end of the floor for a huge chunk of the season. And it could be much worse than that. That said, it’s only 20 games, and funny things can happen in 20 regular-season NBA games. A couple of fluky wins against superior teams on the second night of a back-to-back, and suddenly you’re through that stretch at 10-10 and with a perfectly fine shot at making the playoffs. Fall to something like 7-13, and you’re in trouble.

Denver Dips Into the Old Colts Playbook for Some Vintage Peyton