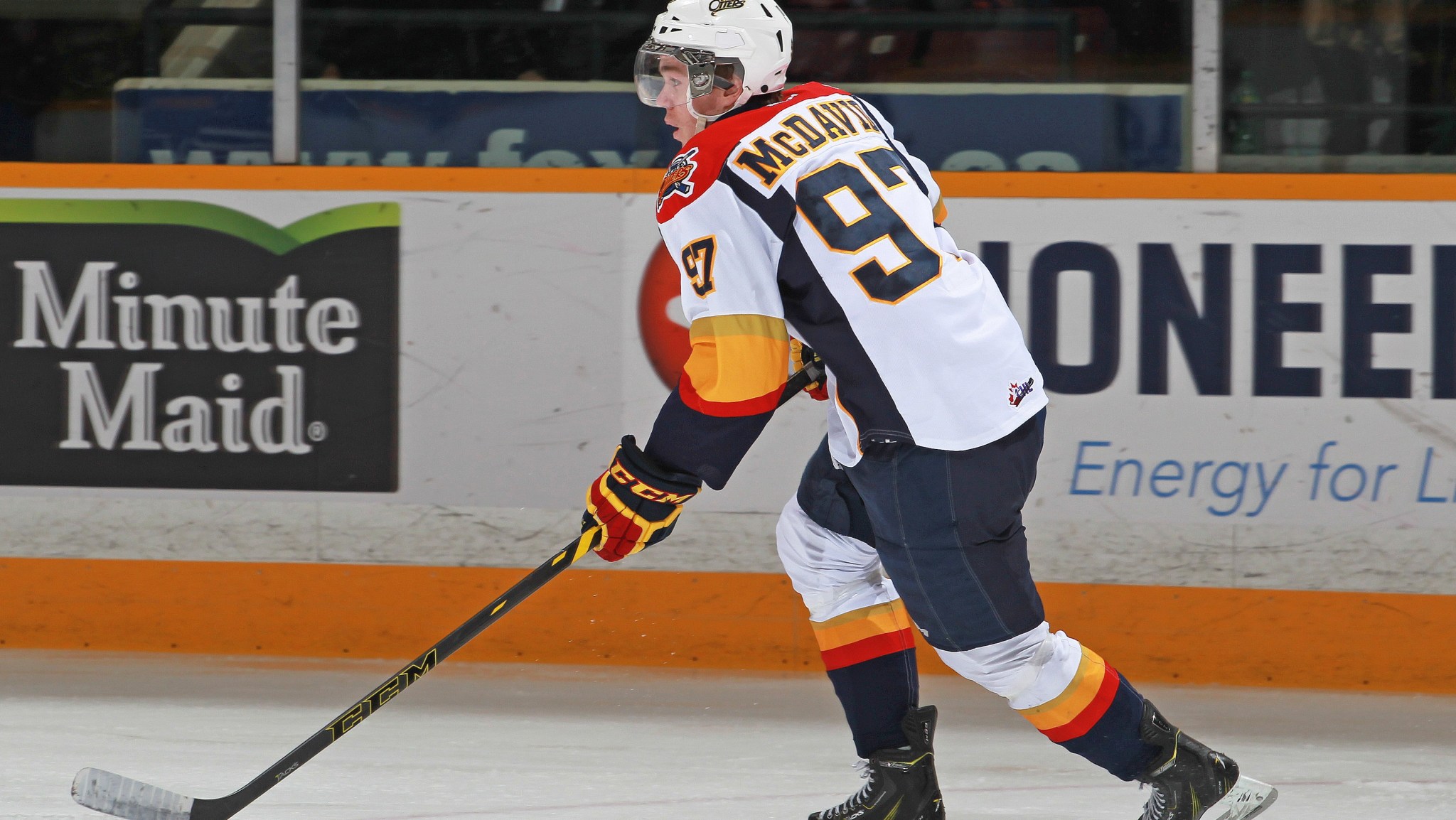 Last week, ESPN’s Craig Custance wrote an article that asked a fun hypothetical question: How much would it cost to trade up to the no. 1 pick in this year’s draft?

The short answer: a ton. In fact, probably so much that a deal would be all-but-impossible to pull off. After all, this isn’t just any draft — this is the Connor McDavid draft, the one in which the team that holds the first pick will end up drafting a sure-thing franchise player who’s been compared to Sidney Crosby.

But midway through the article came a fascinating reveal: Sabres GM Tim Murray has already spent some time thinking about the question. And he thinks he might be able to get it done.

And the more I think about it, the more I suspect he’s right. Let’s assume that the Sabres do finish last — sorry, Coyotes fans — but then lose the lottery. They’d still have the second overall pick. That’s Jack Eichel’s spot, and most scouts consider him almost-but-not-quite in McDavid’s ballpark. Could Murray use that second overall pick, plus a package of other picks and prospects — of which the Sabres have an impressive stockpile — to convince the lucky lottery winner to trade down one spot?

Remember, the Sabres have been pretty blatant about making their whole season about McDavid, even taking the unusual step of hosting his junior team for a game. They did all of that knowing the best odds they could get in the lottery were just 20 percent. Yet they seemed awfully confident. Could that be because Murray has had a plan B all along?

OK, probably not. But it sure is fun to think about. So let’s take a look back through the history books at the other times a team has traded the first pick in the NHL draft. It’s relatively rare; according to ProSportsTransactions.com, there are only a handful of cases when the first pick has been traded before the draft.1

Could Murray pull it off? Let’s see if there’s anything he can learn from the GMs who’ve pulled the trigger.

The background: This was in the early days of the NHL draft, before anyone had really figured out what to do and the whole thing made absolutely no sense. Montreal GM Sam Pollock took advantage of that confusion to continually fleece other teams out of first-rounders, which is what happened here; this trade actually went down more than a year before the 1971 draft. Pollock knew there was a potential franchise player in Lafleur available in 1971, while the Golden Seals … well, the Golden Seals didn’t know what they were doing.

The trade: The Flyers trade Bill Clement, Don McLean and the no. 18 pick to the Capitals for the no. 1 selection.

The background: That package doesn’t sound like much to give up for the first overall pick, and that sort of offer this year would probably get you laughed out of the room. But the 1975 draft was awful, ranking among the weakest ever. It didn’t produce a single Hall of Famer, and only one player went on to score 1,000 career points — and that guy, Dave Taylor, was taken in the 15th round. Bridgman was a decent player, the best taken in the first round, but that’s about it.

The lesson for Murray: Drive the price down by convincing everyone this is a terrible draft. Look, Tim, we never said this was going to be easy.

The trade: The Canadiens trade Ron Andruff and Sean Shanahan to the Rockies for the right to swap first-round picks in 1980 (no. 1 for no. 19).

The background: I love this trade so much; it took place in 1976, and Montreal didn’t get anything in return other than the right to swap picks. So Montreal was basically betting that Colorado would still be terrible a full four years in the future. Which, of course, the Rockies were. Pollock was working some next-level GM magic, I tell you.

All of that said, this is one of the more famous draft picks in Canadiens history, since Wickenheiser ended up being a bit of a bust, and they passed on French Canadian star Denis Savard, as well as other future Hall of Famers like Larry Murphy and Paul Coffey.

The lesson for Murray: You’re going to need two things: a franchise with a history of terrible decision-making, and a guy named Shanahan. Hmm …

The trade: As compensation for Colorado signing free agent Dwight Foster, the Bruins give the Rockies a 10th-round pick in exchange for a second-rounder and the right to swap picks in the first round (no. 1 for no. 22).

The background: This one is technically a free-agent compensation package as opposed to a traditional trade, but it’s close enough that we’ll count it. And once again, it’s the Rockies getting victimized by the ol’ “right to swap picks” move, this time a year in advance. Thankfully, it would be the last time — when the 1982 draft arrived, the Rockies didn’t even exist anymore, having moved to New Jersey to become the Devils.

Kluzak was a good prospect, but his career ended up being derailed by knee injuries. The Bruins passed on Brian Bellows, Phil Housley, and Scott Stevens.

The lesson for Murray: Considering this is now three consecutive deals that ended with an underwhelming player being picked first overall, it’s possible this whole trading up thing isn’t worth the trouble.

The background: This deal went down in October 1982, so it’s another case when that time machine will come in handy. And once again, the player picked ends up being a disappointment. Lawton was the first American selected with the top pick, and he had a decent career, but the North Stars passed on Pat LaFontaine, Steve Yzerman, and Cam Neely.

The lesson for Murray: Yeah, this whole thing might be a bad idea. It’s not too late to learn to love Jack Eichel!

The background: OK, so we’re breaking our own rules by including this trade, since it went down almost one full year after Quebec had taken Lindros. But we’re going to include it anyway, for two reasons: Lindros hadn’t played a game for the Nordiques, and it probably provides the closest historical comparison for what it would take to pry McDavid away from whichever team earns the right to pick him.

Most hockey fans know the Lindros draft story, but here’s the executive summary. After dominating junior, he went into the draft as the most heavily hyped prospect since Mario Lemieux. He’d made it clear that he didn’t want to play for the Nordiques, but they took him anyway, hoping he’d eventually change his mind. One year later, it was clear Lindros wasn’t going to relent, so the Nordiques finally traded him. Twice, actually.

The second deal involved the Rangers and featured a similarly huge package that reportedly included John Vanbiesbrouck, Doug Weight, Alexei Kovalev, and Tony Amonte. That’s the deal the Nordiques decided they wanted. But they’d already made a handshake deal with the Flyers, and after a lengthy hearing, an NHL arbitrator eventually ruled that the Philadelphia deal would stand.

Lindros went to the Flyers and lived up to the hype for several years before injuries and management feuds derailed his career. Meanwhile, Forsberg became the best player in the deal and the Nordiques became the Avalanche, eventually winning two Stanley Cups.

The lesson for Murray: Don’t trade a prospect who’s going to turn out to be even better than the guy you’re acquiring. And if the other GM does shake hands on a deal, tackle him before he can go talk to someone else.

The trades: In November, the Sharks trade Viktor Kozlov and a fifth-rounder to the Panthers for a first-rounder (no. 1) and Dave Lowry. Four months later, at the 1998 deadline, the Sharks send Andrei Nazarov and the right to flip first-round picks (no. 1 for no. 2) to the Lightning for Bryan Marchment and David Shaw.

The background: Fifteen years since the last time the first overall pick had been traded before being used, it was dealt twice before the 1998 draft. The second deal was actually a nifty bit of insurance-buying by the Lightning, who were already on pace to finish last by a big margin, and would only exercise their options to swap picks if the Sharks ended up winning the draft lottery and leapfrogging into the no. 1 spot. That’s exactly what happened, and the Lightning ended up picking Lecavalier, who was easily the best player taken in the first round.

The lesson for Murray: It is possible to finish last, lose the draft lottery, and still wind up with the no. 1 pick. You can do this, Tim!

The background: This was the first time in 24 years that the first overall pick had been traded immediately before the draft, and it was made possible by a fairly unique set of circumstances. The 1999 draft class wasn’t considered an especially good one, and many felt that none of the top picks would emerge as stars. But the Canucks wanted the Sedin twins, and they knew they needed two high picks to make it happen. Brian Burke went to work and wound up with the second and third overall picks; meanwhile, the Thrashers got stuck with Stefan, quite possible the biggest bust in recent NHL history.

The lesson for Murray: Never trade with Burke. Good advice for just about everyone, come to think of it.

The trade: The Blue Jackets trade the no. 3 pick and the right to swap picks in 2003 to Florida for the no. 1 pick.

The lesson for Murray: The right to swap future first-rounders seems to be a staple of these deals. With the Sabres still in the early stages of a major rebuild and not expected to be especially good next year, that could be an attractive option to dangle in trade talks.

The trade: The Panthers trade the no. 1 pick and a third-rounder to the Penguins for the no. 3 pick, a second-rounder, and Mikael Samuelsson.

The background: Just one year after the Nash deal, the Panthers once again swap the no. 1 pick for no. 3 on the draft floor. At least this time, they manage to get something for it, so that’s progress.

The lesson for Murray: Hope the Panthers win the draft lottery, because apparently they’re just about the only team that ever trades the no. 1 pick.

And that’s it. In the dozen years since the 2003 draft, we’ve yet to see another top overall pick traded, even though it is rumored to be in play just about every year. Not a single team has traded up to no. 1 since the dawn of the salary-cap era.

So what did we learn? Mainly, we learned that Murray and the Sabres have the odds stacked against them. It’s rare to see the no. 1 pick get moved, and when it does happen, it’s almost always in a deal that gets done well in advance before the draft slots are finalized.  And that’s in a normal draft year. Add in the McDavid factor, and the task is probably just shy of impossible.

But if anyone could get it done, it’s Murray. After all, he’s still got that time machine.

This article was updated to correct the teams involved in the first trade for the no. 1 pick in 1998. The Sharks received the no. 1 pick from the Panthers before later trading it to the Lightning.