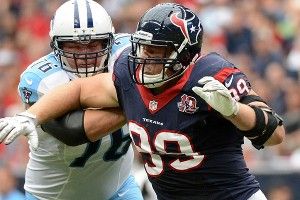 Monday night’s Patriots-Texans game is exciting for a number of reasons. You can spin it as a possible matchup between the league’s best offense and its best defense. Prototypical passing game versus resplendent running game. Perennial contender versus the nouveau riche. Most notably, though, it’s a battle of what could be the top two seeds in the AFC heading into the playoffs. Some might call this a “playoff preview.” In this case, it seems entirely plausible that the Patriots and Texans could meet in either the second round of the AFC playoffs (if the Pats lose and fall all the way to the 4-seed in the AFC) or in the conference championship (if the Pats win and either challenge the Texans for the top spot or stay comfortably ensconced in second). Each team will have some work to do in the playoffs to make it happen, of course, but there’s a decent possibility that we’ll see these two teams play each other again in January.

It’s that word preview that got me thinking. Sure, there’s the possibility that we might see these two teams meet again in the playoffs, but how often does the result in the playoffs mirror what happens in the regular season? Is the regular-season game really a preview of what happens in the postseason, or does it really have little to do with what we see in a January rematch? It’s easy to think of anecdotal examples in each direction, but is there anything empirical that stands out over a larger sample? I took a look back at the numbers to find out.

In those 100 playoff matchups, the team that won the regular-season game also won the postseason tilt 57 times. That number basically means nothing; if it were significantly lower, it would tell us just how random wins and losses among playoff teams can be, and if it were significantly higher, it would tell us that a regular-season win was really meaningful in predicting postseason performance. As it turns out, having that win in your pocket is nice, but it’s far from a lock. That slight bump above 50 percent, for all we know, could be because a team with a win over another playoff team is likely to be better overall and/or likelier to have home-field advantage in the playoffs with a seeding tiebreaker in their pocket.

A far more important factor has been that home-field advantage. In these repeat games, the team hosting the matchup during the playoffs has gone 34-12. Teams who won at home during the regular season and hosted again during the postseason are 18-5. The same selection bias is built in there — teams hosting other playoff teams during the postseason are going to have higher seeds and often be superior — but it’s still an impressive record.

There are certain story lines surrounding playoff rematches well worth examining. For one, you might think about these rematches and wonder whether the teams or situations in question really resemble their playoff selves during the regular season. When the Ravens beat the Patriots in Week 3, they did so on a 67-degree night in Baltimore with Ray Lewis and Lardarius Webb active and healthy. If the Pats have to travel to Baltimore in January en route to the Super Bowl, they’ll find a different team and, likely, far worse weather conditions. It would stand to reason, then, that games played later in the season would have a more meaningful relationship with similar playoff outcomes than ones from September and October. That’s not the case, though: If you look specifically at the 32 teams whose regular-season contest was played between Week 12 and Week 16, the winners from the regular season went 14-18 during the playoffs.

In addition, there appears to be no emotional carryover from a blowout victory or loss. Teams who’ve won by two touchdowns or more during the regular season are just 14-18 against those same teams in the playoffs. Here’s where the backward-looking narratives of postseason play come into focus. If a team gets blown out during the regular season and loses in the playoffs, it’s because the prevailing team was in their head and couldn’t be stopped. If the team gets blown out all the same and then wins in the playoffs, it’s because they desperately wanted to avenge the blowout loss in October and move on.

As for those teams who played twice during the regular season, well, you can safely ignore those old adages. You may have heard that it’s hard to beat a team three times, but it really isn’t; if you were a bad matchup for them the first two times, you probably are again for a third. When a team has gone 2-0 versus an opponent in the regular season, they’re 11-5 in those third playoff games. For every comment about how a team was super-motivated to exorcise the demons and finally trump their rival, there are two who want to exorcise the demons and can’t.

I don’t know that there’s nothing to be gained in predicting who’ll win a Patriots-Texans playoff game based on what happens Monday night, but I think what you’ll learn and what’s applicable is far more micro than macro. Throw out the winner and loser in terms of figuring out what happens in January and focus instead on why and how something specific happened. How do the Patriots handle J.J. Watt? Is it different from other elite 3-4 rushers from the past? Are New England’s linebackers capable of keeping disciplined and making plays against Arian Foster and the zone-blocking scheme in Houston? Those are the sorts of things you can learn by paying close attention or sneaking in a rewatch or two on the DVR. Patriots-Texans is likely to be a great game, but it’s unlikely that the result will mean very much for New England or Houston come January.