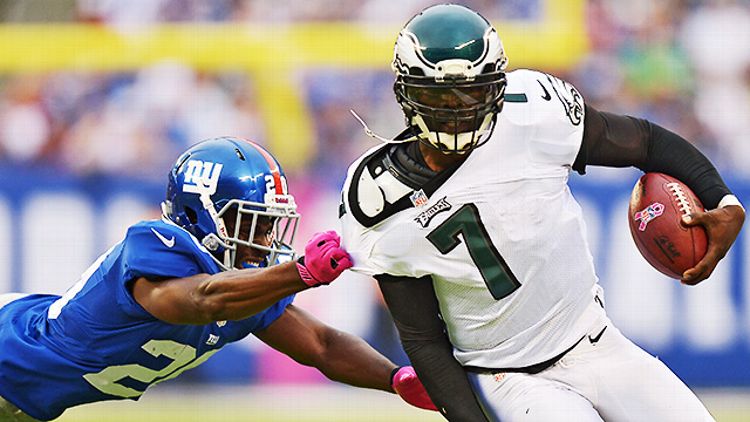 The following trade offer hit my inbox on Sunday morning: James Jones for Reggie Wayne. Given that all proposals are bound to tilt slightly in favor of the person proposing the deal, it seemed fair enough. I considered countering, but the combination of Jones’s knee sprain and my bullishness on Indy’s offense ultimately resulted in a flat-out rejection. Wayne tore his ACL 12 hours later, so apologies for sounding a bit disenchanted with the 2013 fantasy season. Between HOYER THE DESTROYER’s untimely death, Tom Brady’s increasing irrelevance, and the Wayne debacle, this has been a difficult year.

Of course, misery loves company, which is why I’m soliciting your fantasy horror stories for next Tuesday’s Halloween-themed post. Leave them in the comments or tweet them to @mattborcas, and I promise to deliver the spookiest football column ever. Well, aside from today’s, which recommends Peyton Hillis as a waiver-wire pickup and is thus impossible to top on the scariness scale.

First things first: I’m deeply, deeply sorry for including Josh Freeman in this space last week. I thought the best running back on the planet, a talented receiving corps, and the natural high that comes from escaping Greg Schiano could result in some fantasy goodness, but apparently none of that matters if the quarterback in question knows, like, one page in the playbook. In my defense, it was reasonable to assume that Freeman had a basic understanding of Minnesota’s offense after coach Leslie Frazier named Freeman the starter, but whatever. The Giants remain a relatively easy matchup for opposing quarterbacks, and this week the lucky QB appears to be Michael Vick.

Before injuring his hamstring in Week 5 against the Giants, Vick was enjoying a vintage day on the ground, rushing for 79 yards on seven carries. While I doubt Vick will run too much on Sunday coming off a leg injury, the mere threat of a scramble should lead to ample opportunities in the passing game. Prepare for an onslaught of mock salsa dances from DeSean Jackson, cementing Vick as Philly’s long-term starter.

I know how you feel about Le’Veon Bell. He’s plodding, offers no upside whatsoever, and startled the hell out of you on Vine that one time. Those are very valid feelings, and I’m right there with you. But with injuries and byes reducing the Week 8 running back pool to an icky puddle, who exactly is a better RB2? Stevan Ridley? I guess, although his average carries per game (13) pale in comparison to Bell’s (17). Darren Sproles? Giovani Bernard? Only if you play in a PPR league. Darren McFadden? Possibly, but Bell’s consistent workload and unquestioned health make him much less of a risk.

Here are ESPN.com’s top 10 running backs of the week:

After that, there’s a legitimate case to be made that Bell is the next best option. And considering the Raiders have “coughed up a 21-point fantasy average over the last five weeks to opposing backs,” Bell definitely seems like the most reliable.

I endorsed Boykin as a waiver-wire claim because Aaron Rodgers spreads the wealth among his receivers like a Ponzi schemer, but with Jermichael Finley out and James Jones unlikely to play, Rodgers’s focus will be forcibly narrowed.

Boykin’s production skyrocketed following Finley’s injury last week, and Jordy Nelson is currently Boykin’s sole competition for targets. (Slot receiver Myles White — Randall Cobb’s putative replacement — did next to nothing in Week 7 and isn’t much of a threat.) As such, an especially big Boykin performance is all but assured against a besieged Vikings defense that struggles more with WR2s than WR1s.

There were a lot of nice days. When he rushed for 12.1 yards per carry in New York in 2012; when he stifled Tebowmania in 2011; hell, when he shined as a rookie his first preseason.

There were even some nice moments this year, when he returned to glory, ever so fleetingly, with a 54-yard touchdown run on Thursday Night Football. He was a good running back. Now, “was” is the key word in that sentence, but let’s not dwell on the negatives. A lack of talent didn’t kill C.J. Spiller; a mutant left ankle did. Well, that and Doug Marrone.

Shout-out to Mike Wallace for two straight productive games! That has to go down with DiMaggio’s 56-game hitting streak, Wilt’s 100-point game, and Antonio Cromartie’s 109-yard touchdown return as one of the most unbreakable records in sports history. And, obviously, it’s going to come to an end on Sunday in New England.

Aqib Talib, the NFL’s best corner, according to Charles Woodson, is practicing and probably will play. The Patriots have held their opponents’ best receivers to just 5.5 fantasy points per game, which is remarkable when you consider they’ve faced staggering talents like A.J. Green, Vincent Jackson, Jimmy Graham, and Julio Jones, among others. Anticipate a stat line similar to Wallace’s dreadful Week 1: one reception, 15 yards, and two fantasy points.

Here are some facts I discovered about Steve Smith using the popular search engine Google:

• His middle name is Latrall.

• He played on the same junior college team as Chad Johnson.

• He’s been involved in numerous altercations.

• He believes Janoris Jenkins should “wear some condoms,” because he doesn’t appreciate when folks use the popular search engine Google to dig up facts about him. (Oops!)

Well, good thing Darrelle Revis doesn’t need to be armed with mundane tidbits to shut down an opposing receiver! In Week 7, Harry Douglas torched Tampa’s secondary early, but was blanketed by Revis throughout the second half, and while there’s been some concern about how the Bucs are deploying Revis, it stands to reason that they’ll stick with the successful adjustments they made last week. Accordingly, expect a DECIDEDLY quieter postgame press conference from Smith.

Fantasy Bonanza of the Week: Cowboys at Lions

If Ed Orgeron coached my alma mater, I’d feel a mixture of dread, anomie, nausea, and woe, so I think we can forgive Reggie Bush for one unproductive outing. Of course, Detroit’s rash of injuries along the offensive line is also likely to blame for Bush’s nine-point game against the Bengals, but with tackle Jason Fox returning, those issues should be at least somewhat remedied. And if the Cowboys have any desire to stop Megatron, the ascendant Kris Durham, or red-zone ace Joseph Fauria, Bush will have plenty of room to do his thing.

Meanwhile, Terrance Williams is suddenly a WR2 and Cole Beasley (Cole Beasley!) boasts a modicum of value in deep PPR leagues. Where does that leave Miles Austin? As an easily dropped commodity, sadly. And enjoy the likely return of DeMarco Murray, because nothing gold can stay.

• Rob Gronkowski, Week 6: did not play

It’s time to get back to the basics, or else this section will soon become a parody of itself. It’s time to place my trust in a proven formula, especially if that proven formula provides an excuse to repost the best GIF of all time.

So yeah, the Chiefs D/ST is my MVP pick. The Chiefs will be facing Jason Campbell, who was last seen doing this in San Francisco.

The funniest part is that Campbell is indisputably better than Brandon Weeden. Here’s all the proof you need.

No, that’s not a typo. “Garcia” refers to former NFL journeyman Jeff Garcia, who has not started a game since 2008. JEFF GARCIA. It’s really not a stretch to think the Chiefs defense will post 30 fantasy points in Week 8. It’s really not.

With consecutive games of 20-plus fantasy points, might Andy Dalton be entering a new, semi-decent phase of his young career? Who cares? You just need him to perform well this week in place of Andrew Luck or Philip Rivers, and while Dalton is no guarantee to do that against a solid Jets defense, he has a much better chance to pass for multiple touchdowns than, say, Terrelle Pryor or Carson Palmer. Roll with Dalton, who’s fast becoming a first-ballot Bye Week Pickup Hall of Famer.

Seriously, how did this ever happen?

It’s one of history’s great mysteries. But desperate times call for desperate measures, and if you’re in dire need of a running back for Week 8, you could do worse than Hillis. Not much worse, but worse. All signs point to Brandon Jacobs not playing, and if that’s the case, Hillis will get a nice share of opportunities on the ground and as a receiver. “Just call him Roy Hobbs.”

My former roommate, a Jets fan, owns what I believe to be the only Jeremy Kerley replica jersey in existence, so I’ve always felt invested in the guy’s career. In a parallel universe where Santonio Holmes is perpetually hurt (true, this universe would not be much different from our own), Kerley’s jersey might be a top seller — witness his significant increase in targets and receiving yards since Holmes suffered a hamstring injury, which will keep Holmes out of Sunday’s game in Cincy. I’m not saying Kerley will go Megatron on the Bengals, but I’m not not saying it, either.

The Jalen Rose Report With Wale