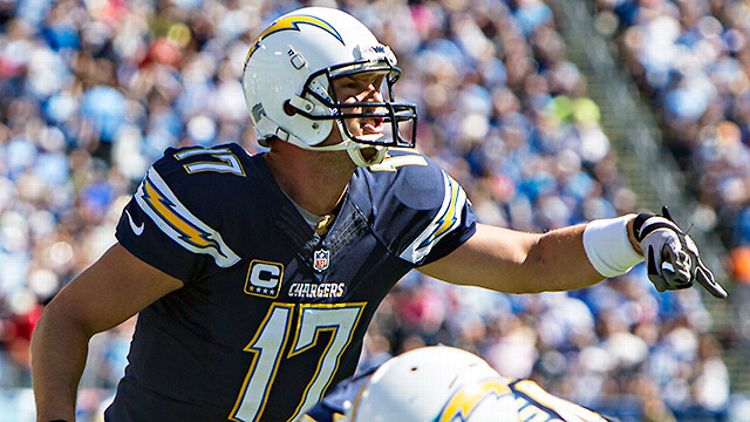 What is reality? I think Bill Belichick asked that at a press conference once, and it’s a question I’ve been pondering mightily regarding Philip Rivers. In the corporeal sense, sure, I’ll concede that he’s real … but is he actually fantasy’s third-best player?

Chargers coach Mike McCoy has worked miracles before, but we’re now beyond the season’s quarter point, and this is usually when miracles start to die a slow and painful death. Mirages melt away, Lil Bow Wow loses his magical sneakers, and the Eagles call on Nick Foles to replace an injured Michael Vick.

For the record, I believe in Rivers, Jordan Cameron, Bad Eli Manning, Giovani Bernard, Kansas City’s defense, and, of course, HOYER THE DESTROYER. On the flip side, I doubt the long-term viability of Michael Vick, Fred Jackson, DeMarco Murray, Julius Thomas, and, of course, Eddie Royal. What are some of your hot takes? Feel free to share them in the comments, but remember: The only way to determine whether reality’s really real is with the passage of time.

A dented pickup truck pulls up to the St. Louis Children’s Hospital. Out steps a disheveled Sam Bradford, flanked by his entourage, which consists solely of former Oklahoma quarterback Rhett Bomar. Bradford heads up to the psychiatric ward to meet with the esteemed Dr. Phoebe McPhoebe. Bomar is not allowed in the building.

DR. McPHOEBE: How are you feeling, Sam?

DR. McPHOEBE: Why are you so sad, Sam?

SAM: There are 32 starting quarterbacks in the NFL. I’m 32nd in yards per attempt. And check out these headlines:

DR. McPHOEBE: I see. What would you like to change about your life?

SAM: I’m sick of all the attention given to Andrew Luck, RG3, Russell Wilson, Cam Newton, and the like. I want to show these kids a thing or two. I’d like to lace ’em up on Sunday and feel as if I accomplished something for once. Really, truly accomplished something. Sometimes I seek guidance from my Heisman. It speaks to me at night. We often play a game called “What is Steven doing?” It’s exactly what you suspect: We guess what Steven Jackson might be doing at any given moment. I miss Steven, Dr. McPhoebe. I want a running game.

DR. McPHOEBE: OK, OK, I think I have just the prescription for you. It’s called “Jacksonville,” and it has surrendered 65 fantasy points to opposing quarterbacks through four weeks. Additionally, you’d do well to check out my best-selling foray into self-help literature, The 84 Qualities of Very Happy Individuals.

Da’Rel Scott is gone, Brandon Jacobs is averaging one yard per carry, and at this point, allowing Eli Manning to pass AT ALL is an untenable strategy for winning football games. Unless Tom Coughlin inexplicably assigns Jacobs a heavy workload — which Coughlin seems capable of doing even though there’s literally no valid reason to — expect a comeback performance from Wilson against the Eagles.

Since Wilson’s infamous fumble-riddled Week 1, he has gradually received more touches and has yet to put the ball on the ground again. At 0-4, the Giants have nothing to gain by playing someone with Jacobs’s limited upside. They’ve got to ride or die with Wilson, and so do you.

Pay no mind to the fact that Gordon’s two-game drank suspension conveniently coincided with Weeden’s stint under center. The larger point here is that HOYER THE DESTROYER consistently feeds his leading playmakers, Cameron and Gordon, and they in turn eat like young Joey Chestnuts.

Although Buffalo boasts Football Outsiders’ fifth-ranked pass defense, a closer look reveals that the Bills yield a staggering 137.8 yards per game to no. 1 wideouts. Of course, Gordon isn’t just the Browns’ top receiver from a statistical standpoint — he’s a prototypical WR1, garnering comparisons to Randy Moss, Dez Bryant, and A.J. Green, and Gordon figures to soon ascend to their level, fantasy-wise.

BOLD PREDICTION TIME: Gordon will finish the week as a top-five receiver. We can bank on eight receptions for 100 yards, and that’s just the baseline.

so much depends
upon

beside the SHITTY
OFFENSIVE LINE

While it’s unclear how the workload will be split tonight between Spiller and Jackson, both should play, albeit in diminished roles. Spiller is questionable with an ankle injury, Jackson’s probable with a sprained MCL, and these issues are naturally exacerbated by the short workweek. The Bills’ own website declares that third-stringer Tashard Choice could have a “featured role” come game time, a report corroborated by the Buffalo News, which claims “Choice should see his most extensive playing time of the season.”

While there’s a chance Jackson could rack up some PPR-league points from checkdown god EJ Manuel, it’s best to avoid this situation entirely. Beyond the Bills’ health concerns, the Browns allow a scant 2.9 yards per carry and have completely shut down Lamar Miller, Ray Rice, and Giovani Bernard. Most impressively, Cleveland held Adrian Peterson to 14 fantasy points, a figure for which Spiller, Jackson, and Choice will be lucky to combine in Week 5.

Do you remember the Panthers’ 38-0 annihilation of the Giants? You probably do, because you’re a rubbernecker and find death, destruction, and Curtis Painter endlessly fascinating. However, you probably don’t remember anything specific about Steve Smith. He posted a meager stat line, connected on fewer than half of his targets, and scored only four fantasy points.

This week won’t be any easier given his matchup against Patrick Peterson. Brandon LaFell, Greg Olsen, and the emerging Ted Ginn will outperform Smith for the second consecutive game.

The Bears rank 31st in the NFL against tight ends, so yes, it’s entirely possible for Jimmy Graham to improve on his monstrous average of 20 fantasy points per game. If a banged-up Peanut Tillman manages to lock down Marques Colston, rookie Kenny Stills will pick up the slack, and Darren Sproles will see a sizable share of targets as well.

While I don’t expect Alshon Jeffery to follow up his breakout performance with anything worthwhile — the Saints are tops in the league against no. 2 wideouts — Brandon Marshall will get back on track with a touchdown or two, because you can only bottle up a hurricane for so long. Matt Forte remains a consistent force, and you know what they say: Give me consistency, or give me death! For the record, I personally prefer inconsistency to death, though I know many folks who don’t.

Mike Glennon, for being on bye.

Mad Glennon respect. RT @smartfootball RT @sgw94: Count how many Cards are within 9 yards of the LOS here. pic.twitter.com/XyCSzJ6sNr

Coming in second is the Kansas City D/ST, not only because the Chiefs lead the NFL “in scoring defense (10.3 points per game allowed), red zone efficiency defense (25 percent), and fewest yards per pass attempt (5.03),” but because they’re slated to face Ryan Fitzpatrick, the man whose career touchdown-to-interception ratio makes Carson Palmer, Matt Schaub, and Eli Manning look like some of history’s most accurate passers. Considering Fitzy’s propensity for pick-sixes, it seems safe to say that Eric Berry & Co. will score 20-plus fantasy points for the fourth time in five weeks, provided the Titans don’t run the STEED-OPTION.

If you’re a backup-less RG3 owner, T. Peezy is the best readily available option. He should run roughshod on a Chargers defense that surrendered 68 rushing yards to Jake Locker, and he has developed a halfway-decent rapport with receiver Denarius Moore. Also, Matt Flynn made Pryor look really, really, really good last week.

A knee injury kept Stevan Ridley out of practice yesterday, and there’s an outside chance he’ll sit against Cincinnati. If that happens, Blount becomes an automatic must-start, because even Belichick isn’t evil enough to give Brandon Bolden a full workload. Even if Ridley does play, he’s been relatively ineffective this season, and Belichick hasn’t hesitated to ride Blount when necessary.

Look, we’re digging for deep sleepers here; this is practically paleontology. Despite falling to San Diego in the third round, Allen was projected by many reputable scouting services as a first-round talent, which showed in Week 4. In Malcolm Floyd’s absence, Allen started and caught five balls (on six targets) for 80 yards and 13 fantasy points, and there’s no reason why he shouldn’t torch Oakland’s shoddy secondary on Sunday. Imagine you found the fossilized remains of a T. rex in your backyard. Now imagine that T. rex is named Keenan Allen and has been sent from above to shore up your receiving corps.